The oddly named tasselled wobbegong is a flat, seafloor-dwelling shark that effortlessly blends into its surroundings on coral reefs, waiting for unsuspecting prey to swim by.

They inhabit the ocean floor and offshore reefs in the Western Pacific, typically near Eastern Indonesia, New Guinea, and Northern Australia.  They are also often spotted by divers in the Great Barrier Reef. 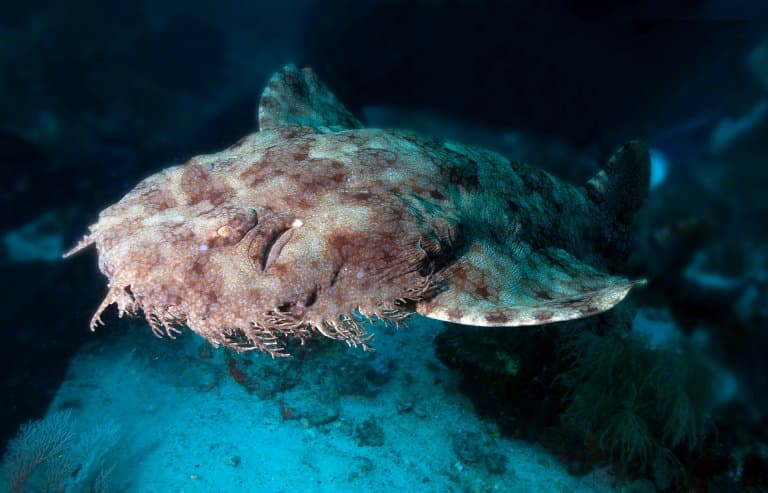 Considered small-to-medium sized compared to other sharks, these masters of camouflage spend much of their time sitting motionless on the seafloor. Their skin matches the sea bed and they are a supreme ambush predator, that waits for prey.

The average tasselled wobbegong is roughly 4 feet long on average, though there has been report of them growing as long as 12 feet.

The tasselled wobbegong has several distinctive features that help it stand out among other sharks. It has a broad, flattened head covered in branched dermal lobes that create a sort of fringe around the front of its body. These tasseled lobes help the shark to blend into the seafloor and coral reefs as it waits for prey to swim by.

1.    The name “wobbegong” comes from an Australian Aboriginal word

Tasselled wobbegongs get their name from Australian Aboriginal language. The name is believed to mean either “shaggy beard” or “living rock.”

This has led to the species adopting other nicknames, such as “carpet sharks,” due to their ornate patterns and bearded jaws. 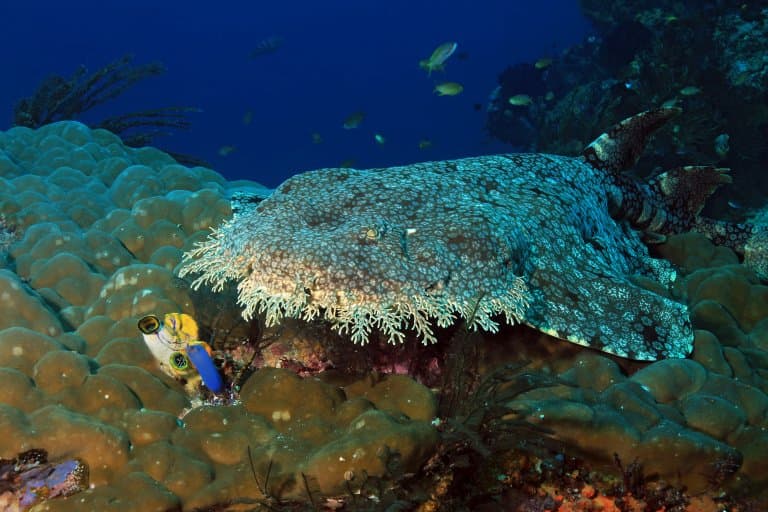 While many sharks are considered to be relatively fast swimmers, wobbegongs are not.

In fact, they prefer not to move much at all. These creatures are more designed to sit and wait for their pray instead of hunting it down across open waters.

3.    There are 12 different types of wobbegong sharks

These sharks generally look quite similar, making it difficult to tell them apart. In many cases, the size of location of the shark much be used to distinguish it from others.

4.    Not much is known about how tasselled wobbegongs communicate

These sharks are solitary, spending much of their time siting in stillness in coral reefs. Sharks also lack vocal cords, so they don’t have a way of vocalizing underwater.

While there have been reports tasselled wobbegongs couching as they grip onto their prey, the reason behind these sounds is unknown. 2

5.    They are built for camouflage

It’s not just the fringe along its face that makes this shark a master of camouflage. The tasselled wobbegong has a complex color combination that helps it blend into the coral reefs and ocean floor.

They also have a more flattened head and rounded fins.

While these adaptations make it move much slower through the water, it is seen as the most specialized in terms of ambush and hiding away from predators. 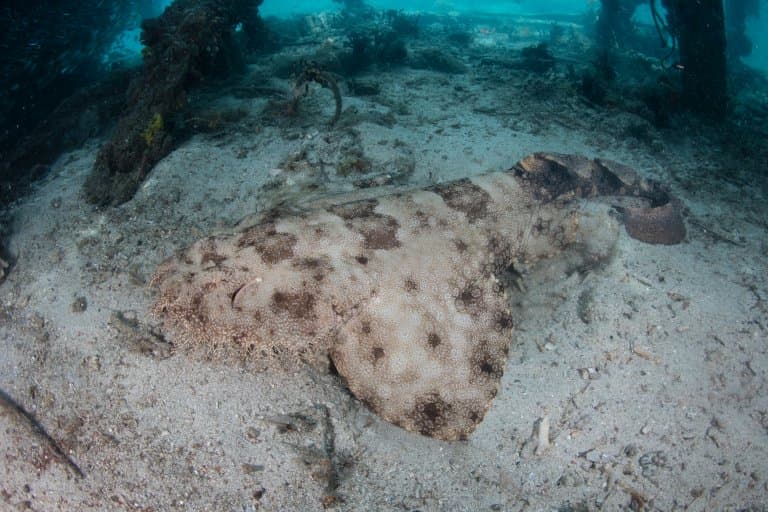 6.    Wobbegongs suck in prey as it swims by, sometimes swallowing it whole

Tasselled wobbegongs have a unique jaw structure that allows for dislocation. This feature, along with rearward-pointing teeth, allows them to suck in pray as it swims by, before swallowing it whole.

They have even been known to grab into relatively large prey, such as other sharks. 3

7.    Tasselled wobbegongs have a nasty bite

Like many ambush predators, tasselled wobbegongs have powerful jaws and needle-like teeth that allow them to latch onto their prey.

While they aren’t typically considered to be a danger to humans, there have been cases of swimmers, divers, and surfer getting bit if they got to close. And once they latch on, they can be very difficult to remove. Fortunately, not of these attacks have been fatal.

8.    They walk along the seafloor

Tasselled wobbegongs will glide across the ocean floor with the use of their pectoral and pelvic fins. Since they stay so close to the bottom, it often appears as if they are walking.

Since the tend to say in within coral reefs, they have also been seen walking across the rocks from one tide pool to another during low tide.

While the tasselled wobbegong has no issues sitting in the same spot for hours, this isn’t the only method it will use for catching prey.

Oftentimes, a shark will wave its tail to attract fish to where it is lying.

The movements mimic that of a fish, so the fish will enter the space thinking it is safe. Once the fish is in range, the shark will open its mouth and swallow it up.

Tasselled wobbegongs are nocturnal predators and spend much of their time in low-light conditions.

Instead, they tend to rely more on other senses such as the lobes on their face and their sense of smell to gauge what is going on around them.

There is even some theory that wobbegong sharks do not have color vision due to their lack of cone pigment. 4

The tasselled wobbegong gives live birth to a liter of 20 or more pups that are about 7 to 8 inches long when born.

However, like many sharks, these mothers are hands off, and don’t provide any care to the pups once born. 5

12. They are in the children’s book ‘You’re Called What?’ by Kes Gray

The infamous and hilarious children’s book is about silly, weird and fun amimal names, so the tasselled wobbegong had to be featured! Alongside other amusing named animals such as the Blue-Footed Booby and the Monkeyface Prickleback. 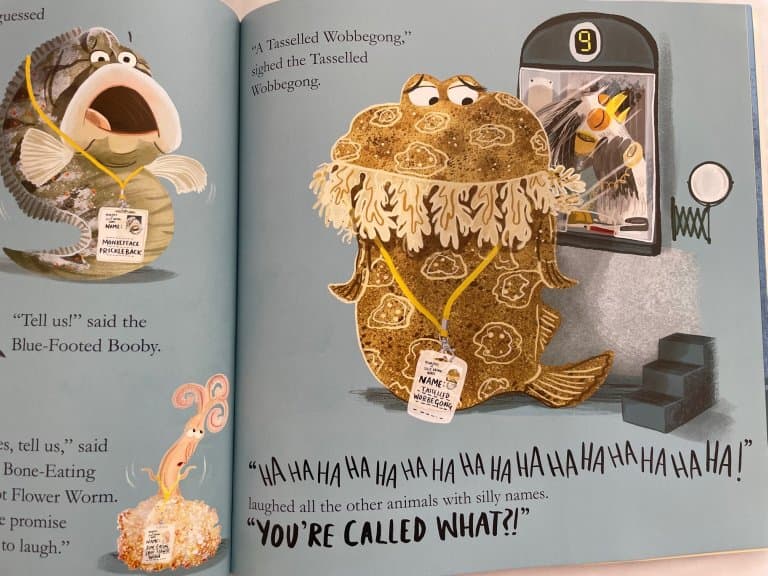