With their brightly colored feet, blue-footed boobies (Sula nebouxii) are one of the most easily recognizable birds on the planet.

They are marine birds that reside on islands of the Pacific Ocean. As migratory birds, they will move along the coasts of California, Mexico, Ecuador, and Peru throughout the year. 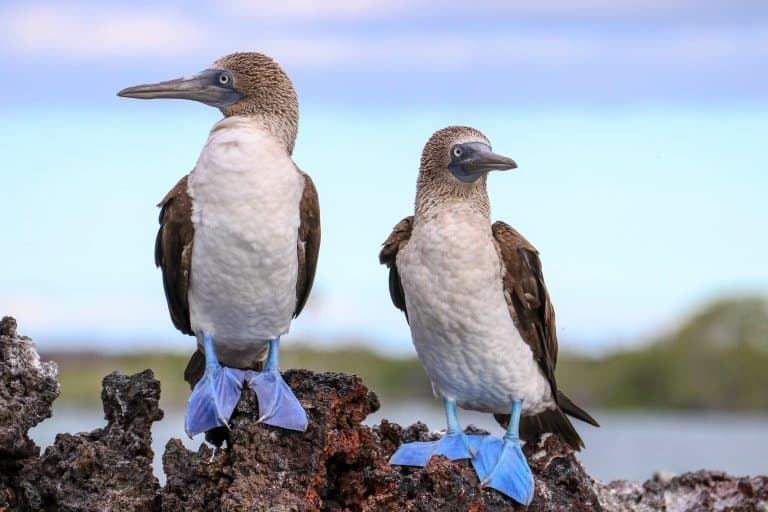 The striking blue color of their feet is due to pigments consumed through their diet. These pigments are called carotenoids and can be found in a variety of fish.

Groups of boobies are called flocks. Together, they will sleep at night on land and fly out to sea to feed. Typically, these birds feed on small fish, such as anchovies and sardines.

They are currently classified by the IUCN as a species of least concern due to their broad range and stable populations. However, blue-footed boobies are still affected by the growing effects of climate change and overfishing.

1. Their name is attributed to their defenseless and docile nature

It is believed that the name “boobies” was inspired by the Spanish term “bobo”, which means stupid.

Blue-footed boobies are known to be quite passive and helpless when confronted by potential threats. 1

2. They can dive into the water from incredible heights

Blue-footed boobies plunge into ocean waters to snatch up prey. They will target large schools of fish and have been seen diving from heights of up to 80 feet in the air. 2 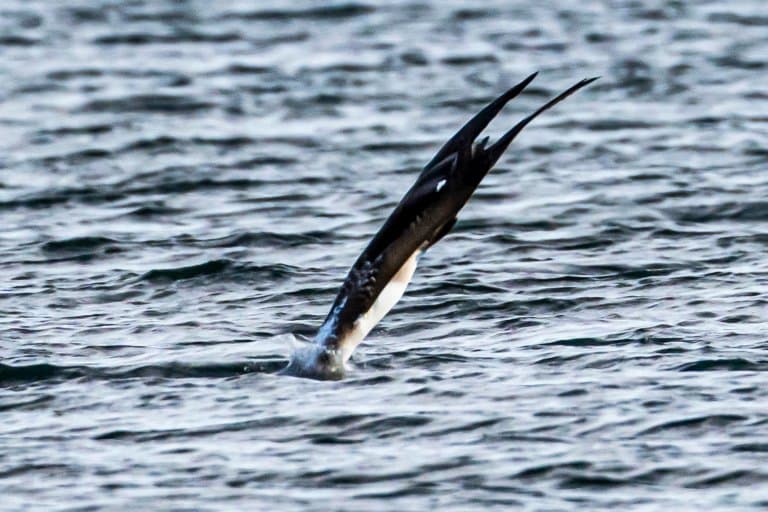 3. Females will choose their mates based on the color of their feet

To female boobies, the bluer a male’s feet, the stronger and more fertile he is. Males will also examine the color of potential mates and use it to determine how suitable a partner they will be.

During the courtship phase, males will put on intricate displays of strutting forwards and backward to impress nearby onlookers.

4. Blue-footed boobies belong to a family of five other boobies

5. They are not born with blue feet

At birth, blue-footed booby chicks have extremely pale feet that are almost white in color. Over the next few weeks, they will gradually darken and acquire the characteristic blue shade. 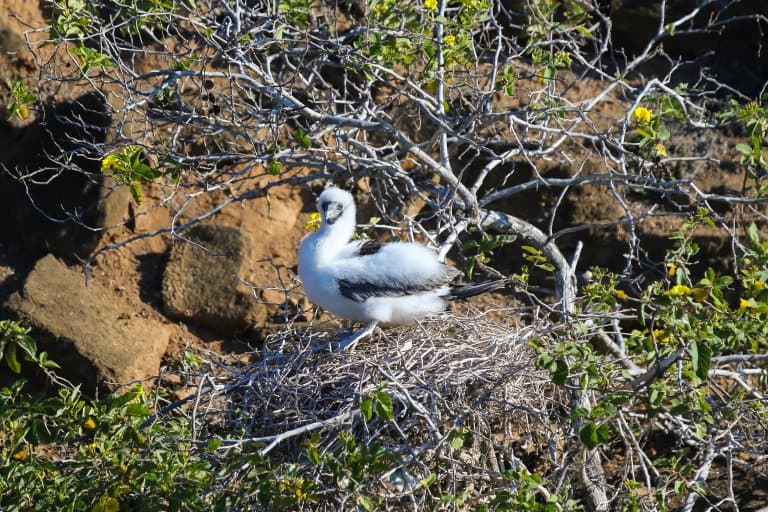 6. They grow up fast

After hatching, parents will take care of their chicks for approximately two months. Subsequently, chicks are capable of hunting and living on their own.

Within a single breeding season, boobies will stay with one partner and work together to raise their nest. Females tend to lay two to three eggs each season. 3

8. There are huge advantages to hatching first

Of the two or three chicks that hatch, it is not uncommon for only one chick to make it to adulthood.

Often, the first chick that hatches is taken care of the most and receives the most attention from its parents.

Female blue-footed boobies are, on average, 20 to 30 percent larger than males. 4 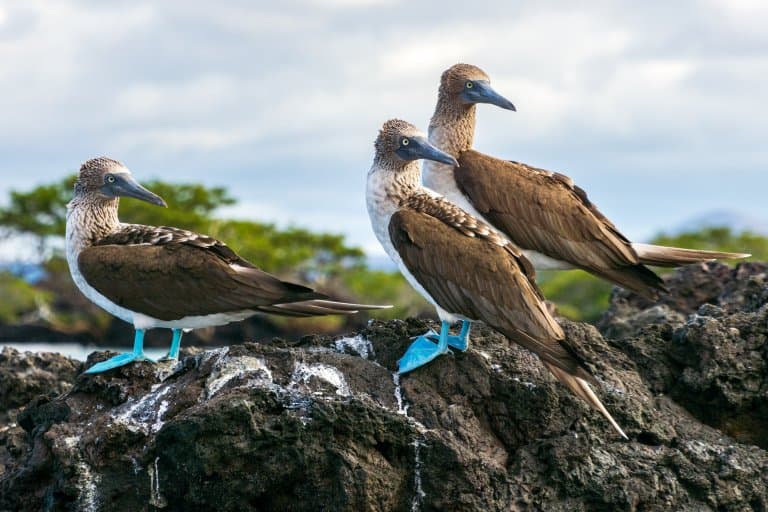 10. Chicks are not always raised in a traditional type of nest

Unlike other birds, boobies do not build conventional nests made of sticks and grass.

Rather, their nests are shallow hollows of earth. Parents do not leave their nests to defecate, and so, nests have white rings of excrement surrounding them.

11. There is evidence that suggests parents soil their eggs on purpose to veil them from predators

Freshly laid eggs are pale blue in color. They soon become white and easier to spot by predators close by. Studies have reported that to conceal them, parents will cover their eggs with dirt and excrement.

12. Despite living in groups, they are still quite territorial

Males in particular are quite protective over their nests.

They will parade around their small areas and wave their large feet around, indicating to other males that their patch of ground has been occupied. 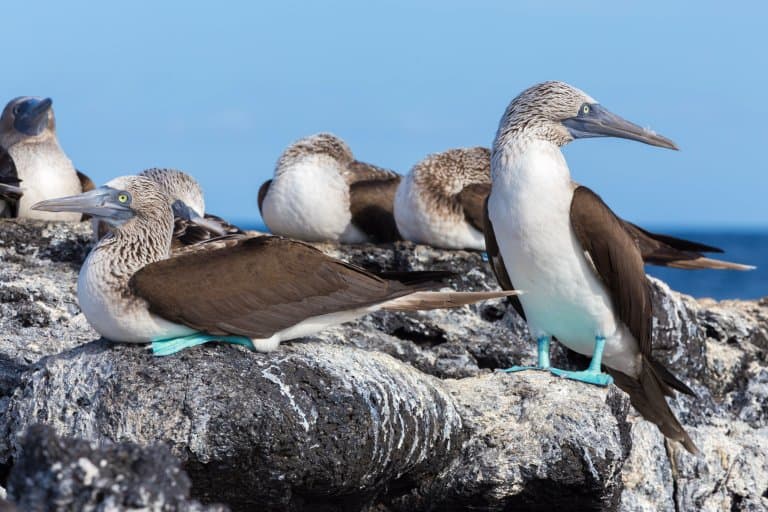 13. The orientation of their eyes gives them binocular vision

Their sharp eyesight helps them spot groups of fish in the dark waters below.

14. Their large feet are also used when raising young

Parents have been observed covering their chicks with their webbed feet to shield them from the cold.

15. They allow the vampire ground finch to suck their blood

The tiny vampire ground finch have been seen pecking at the skin of the blue-footed booby and ‘milking’ them for their blood.

They seem to do it during times of drought, and for some reason, the boobies don’t seem to mind too much!

It’s possible that this behaviour originated from a form of commensalism in which the ancestor of the vampire finch would pick off parasites from the boobie, and gradually evolved into cutting out the middle-man entirely. The finches then capitalised on an alternative food source!

16. Alphonse Milne-Edwards was the first person to describe them

It has been approximately 140 years since blue-footed boobies were first believed to be described by Alphonse Milne-Edwards.

He was a French ornithologist who had a passion for studying bird fossils and the deep sea.

17. They are in the children’s book ‘You’re Called What?’ by Kes Gray

The infamous and hilarious children’s book is about silly, weird and fun amimal names, and the silly-named Blue-Footed Booby is one of the stars of the book, alongside the Monkeyface Prickleback and the Tasselled Wobbegong. 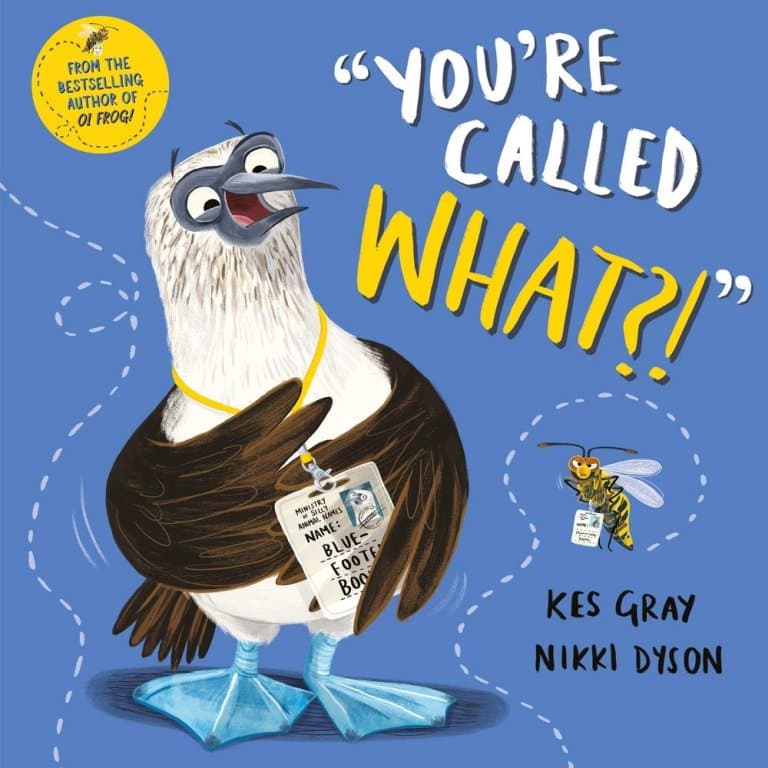