Porcupines are rodents with an interesting way to protect themselves from predators. They wear a coat of sharp quills all over their body.

Both families have distinct locations. The old world variety can be found in southern parts of Europe, western and southern Asia and throughout most of Africa. The new world variety is in North and South America. 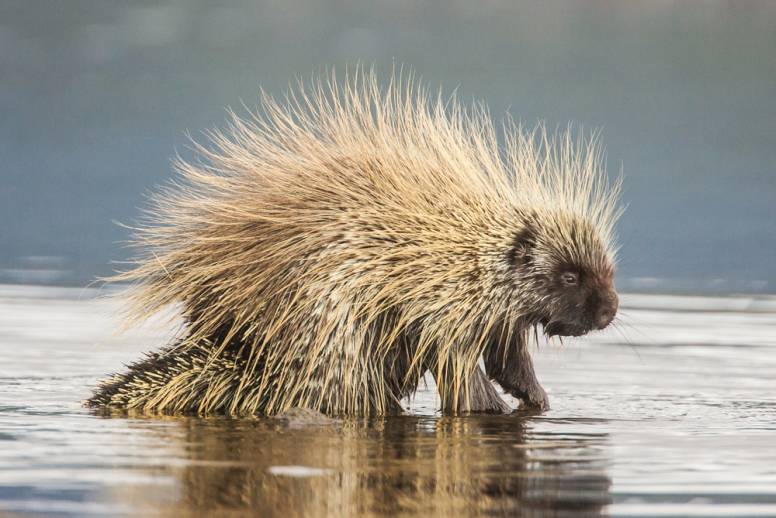 Regardless of the family, most Porcupines are about the same size. They are about 25 to 35-inches long, have an 8 to 10-inch tail and weigh between 12 and 35-pounds. They have a large, round body and move slowly. The coloring of Porcupines varies from shades of brown to grey and white. The spiny outer protective layer of a Porcupine resembles that of hedgehogs, which are not related.

The name porcupine comes from the Latin words ‘porcus’ and ‘spina’ which translate to mean pig spine. The animal has the nickname in parts of North America of quill pig.

1. Porcupines can live a long time.

If you were ever looking for an unusual piece of trivia, the porcupine held the record for being the longest living rodent in the world. One documented example lived to the ripe old age of 27 years. However, as is usually the case with records, it was broken when the Naked Mole-Rat became the longest living rodent after one reached 28 years of age.

The North American Porcupine is an herbivore and sticks to a diet rich in herbs, leaves, twigs and green plants. They may actually eat bark in the winter and will climb trees in an effort to find food. The African Porcupine does not climb so it forages mostly on the ground, and is mostly nocturnal. It will sometime forage for food during the day and will eat a more varied diet that will include roots, fruits, berries, bark and farm crops. In Kenya, Porcupines are a known pest to farmers and many have ended up on dinner plates served as a delicacy.

3. Porcupines do not have a very wide range of habitats.

You can usually find Porcupines in parts of Asia, southern Europe, Africa, North and South America with a tendency to gravitate towards tropical and temperate climates. They generally occupy forests, deserts, hill sides and rocky outcrops. There are some New World Porcupines who live in trees while Old World Porcupines remain on the rocks. These ones can be found on rocky areas up to 12,000-feet in elevation.

4. There are a few differences between Old World and New World Porcupines.

5. Don’t tick off a Porcupine as it has several defensive behaviors.

The defensive response from a Porcupine depends on several factors. They include scent, sound and sight. Typically the Porcupine will display defensive behavior when it gets annoyed or agitated. There are four main displays that will come from an agitated, irritated and ticked off Porcupine. They include quill erection, clattering teeth, the emitting of an odor and finally, an attack.

6. A Porcupine’s color helps protect it from many predators.

As most of the predators that a Porcupine may encounter are nocturnal, the black and white colors of the Porcupine protect it. It also helps that their predators are color blind.

7. The Porcupine quills are not the same on every species.

All Porcupine quills are actually modified hairs that are coated with thick plates of keratin and are embedded in the musculature of the skin. Old World Porcupines have cluster quills and the single quills of New World Porcupines are interspersed with hair, under fur and bristles.

8. Porcupines do not throw their quills.

Quills actually are released through contact and sometimes a few may fall out when a porcupine shakes its body vigorously. Once a quill is released, a new one will grow in its place. The Porcupine does not throw the quill, it actually breaks off at the base when the barbs at the tip of the quill penetrate something. So, in actual fact, the quills get pulled out of place once firmly attached to something like skin or some other soft surface.

9. Porcupine populations have declined partly due to the fact that they are a food source to some humans.

While they are not regular menu items in Western Culture, Porcupines have been eaten on occasion. They are, however, very popular in Southern Asia. In Vietnam particularly, Porcupines are a prominent food source and that has contributed to a significant drop in the population in that region.

10. Porcupine quills are popular for various types of uses.

The quills and guard hairs of the porcupine are commonly used in traditional decorative clothing. The guard hairs are of particular interest as they are used in the creation of Native American head dresses. The quills are usually dyed and then applied with thread to add interest and beauty to various types of leather work including knife sheaths and bags. One method used to harvest the quills from a Porcupine involves throwing a blanket over top of one and collecting the quills that were caught in the material. The actual design of the Porcupine quill has been credited with inspiring the creation of a new type of hypodermic needle. The quills contain backwards-facing barbs and when used as a needle the quill not only penetrates the skin, it will also stay in place. This has led to the notion that with the firm anchor in place – the backwards-facing quills – in a needle design, the needle would be firmly held in place for administering various drugs or other uses in health care.