The Bullet Ant (Paraponera clavata) is an ant species found in lowland tropical rainforests in Central and South America.

They are famous for having the most painful sting in the world which is said to be comparable to the pain of being shot, giving them their name.

They are sometimes called the ‘big black ant’, ‘conga ant’, ‘the lesser giant hunting ant’ and the ’24-hour ant’ referring to the full day of pain that follows after being stung by one.

They are members of the order Hymenoptera, to which most ants, wasps and bees belong. 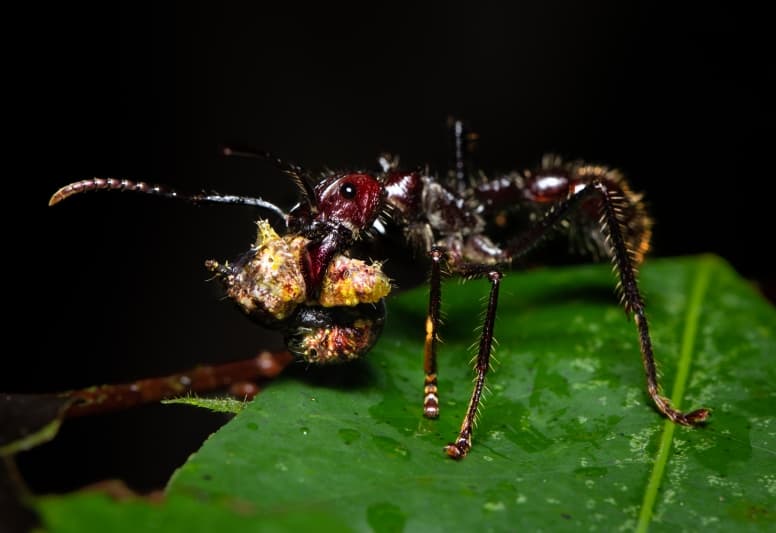 Bullet Ants are famous for their sting, and are one of the worlds largest ants, with distinctive mandibles (pincers) and a large stinger extending from their abdomen.

Like many members of the order Hymenoptera, they live in complex colonies with hundreds of members. They have lots of forager ants who collect food and bring it back to the nest which is where the queen ant and her larvae live.

Their nests are often at the base of trees with buttress roots. Worker ants will climb up and down trees searching both for small arthropods, and for nests they can raid for nectar.

They attack small arthropods with their sting, the venom of which paralyses or kills them. Whatever goodies they find they carry back to the nest in their large mandibles.

As with many invertebrates in the tropics, there is not enough data to know the conservation status of Bullet Ants. However, their habitat is under threat, meaning they are likely also threatened. 1

1. Bullet Ants Have The Most Painful Sting In The World

The Bullet Ant sting is said to be the most painful of any insect. This was discovered by a man called Justin O. Schmidt, who claims to have been stung by almost every stinging member of the Hymenoptera order. He had this to say about being stung by a Bullet Ant:

“pure, intense, brilliant pain…like walking over flaming charcoal with a three-inch nail embedded in your heel.” 2

The sting can last for 24 hours, and symptoms include fever, nausea, trembling and cardiac arrhythmia.

Schmidt created the Schmidt scale of insect pain, which has 4 categories. The Bullet Ant was the only insect in category 4 (the highest level), until it was joined by the Tarantula Hawk, who’s sting lasts considerably less time at 2 hours.

While their sting is painful, they aren’t generally aggressive. When provoked, they will typically clamp down with their mandibles first (also painful), before stinging. However, when they sting, they release a chemical that makes all the ants around them go into a stinging frenzy.

2. They Are One Of The Largest Ant Species

Bullet ants can grow up to an incredible 1.2 inches long, which makes them one of the largest true ant species in the world. Unlike other ant species, the queen of a bullet ant colony is usually around the same size as the workers. 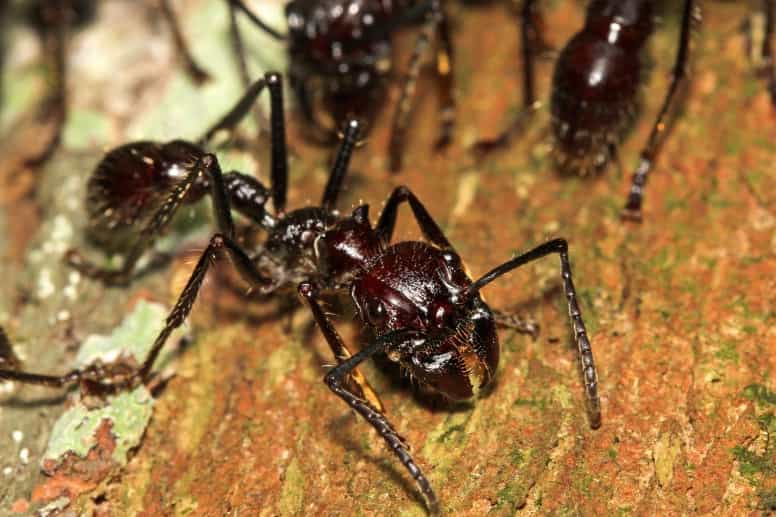 Giant Bull Ants, which are native to Australia, range between 0.3 and about 1.5 inches long. While Dinoponera, also known as Giant Amazonian Ants, are the worlds largest ants which grow up to 1.6 inches in total body length.

3. Bullet Ants Have A Powerful Venom

The toxin in their venom is called poneratoxin. It works by altering the normal function of synapses (communication points in the nervous system) in both vertebrates and invertebrates. It makes the synapses go into overdrive, sending lots of signals to the brain, which is what causes pain.

The venom is so potent that it is being researched for its potential as a natural pesticide. 3

4. They Have Their Very Own Parasite

The jungle is full of parasites, most of which have evolved highly specific relationships with their hosts. The Phorid Fly (Apocephalus paraponerae) is one such parasite. Bullet ants, while not generally aggressive, will often fight brutally with other Bullet Ant colonies over food. 4

Phorid flies are attracted by the pheromones produced by wounds on the ants. Once they find the injured ants, they lay their eggs in the wounds. Typically, many females deposit eggs in just one host, so after 2-3 days you may get as many as 30 larvae on just one Bullet Ant! 5

Until very recently, it was thought that bullet ants ate mainly small arthropods and nectar. However, a recent study published just this year found that they also scavage carrion (dead animals). 6

This find changes how we understand their role in rainforest food webs, suggesting they might be important scavengers. It also highlights how little we know about tropical rainforests, and how new fun facts are being found every day.

6. They Are Used In A Grueling Initiation By The Sateré-Mawé Tribe

The Mawé are an indigenous Amazonian tribe, found in Brazil, who still exist primarily in isolation from the outside world. However, they’ve become well known for one of their terrifying initiation ceremonies.

To become a Mawé warrior, young men must endure multiple simultaneous Bullet Ant stings, all while keeping a straight face. Using a special herbal brew, ants are sedated and sown into a glove (stingers facing inwards) which boys (some as young as 12) must wear for 10 minutes.

They must have the courage to endure this ceremony a total of 20 times to be considered a Mawé warrior. 7