The Thorny Devil is a small Australian lizard that has many different names, including the thorny devil, the mountain devil, thorny lizard, moloch and thorny dragon. The thorny devil typically inhabits the arid scrub land and desert that covers the majority of central Australia.

The top of their body is covered in spikes and scales, which help it defend from predators. It also has a spiny ‘false head’ on the back of its neck, which it presents to predators while hiding its real head. 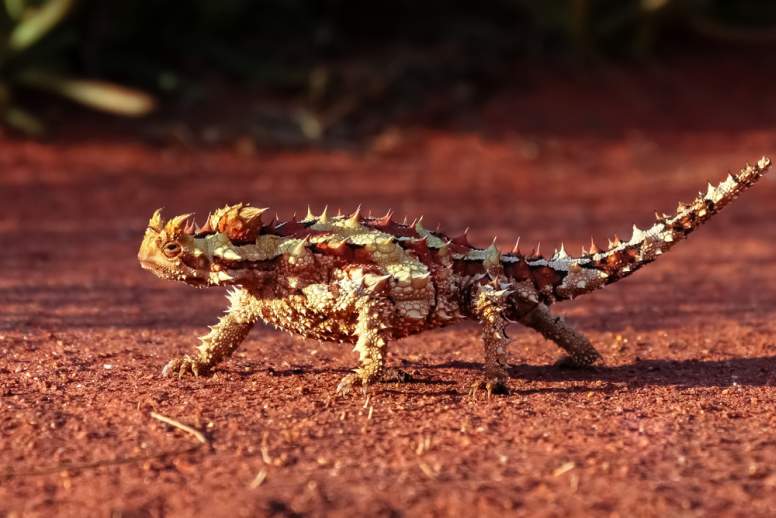 They are found in the sand plain and sand ridge desert in both the mallee belt and deep interior of the continent. The habitat of the lizard matches more to the sandy loam soils than it does with any specific climate in Western Australia.

The average lizard will grow to between 5.9 and 8-inches in length. It can weigh between 2.5 and 3.4-ounces. The average thorny devil will live between 12 and 20 years.

The diet of the thorny devil is primarily ants and they will dine on a lot of them. Estimates say that a few thousand ants will be devoured by the lizard on a daily basis.

The thorny devil will collect moisture in their extremely dry habitat by the condensation of dew collected on their bodies at night. The dew takes form on the skin of the thorny devil and its channeled in hygroscopic grooves between skin spines to its mouth. Capillary action permits this creature to absorb water through its skin during rainfall activity.

The thorny devil is listed under the category of ‘Least Concern’ on the IUCN conservation list. While this means there is no immediate concern for the time being, at least it is noted with a status.

It does have several predators, including man but the lizard has also developed many different ways to protect itself from becoming prey.

1. The have a spiny ‘false head’ on the back of the neck.

It is usually presented to potential predators when the real head is dipped downward between their forelegs. The false ‘second’ head is made of soft tissue. 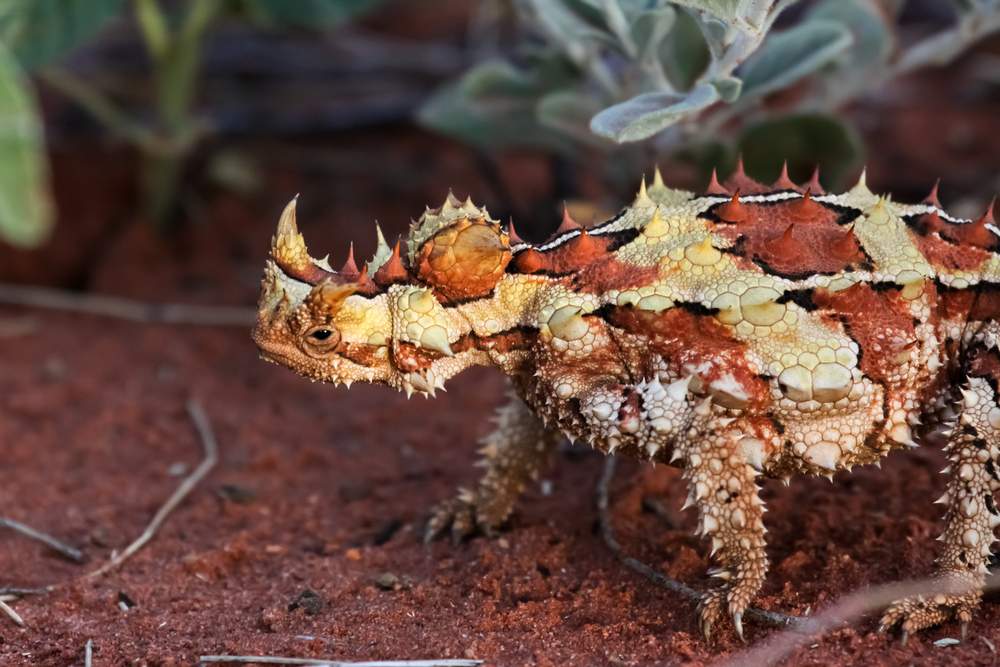 2. They are covered in hard, sharp spikes and scales to dissuade predators.

Not only does it make them risky to touch or bite for predators, it also makes them difficult to be swallowed as well. 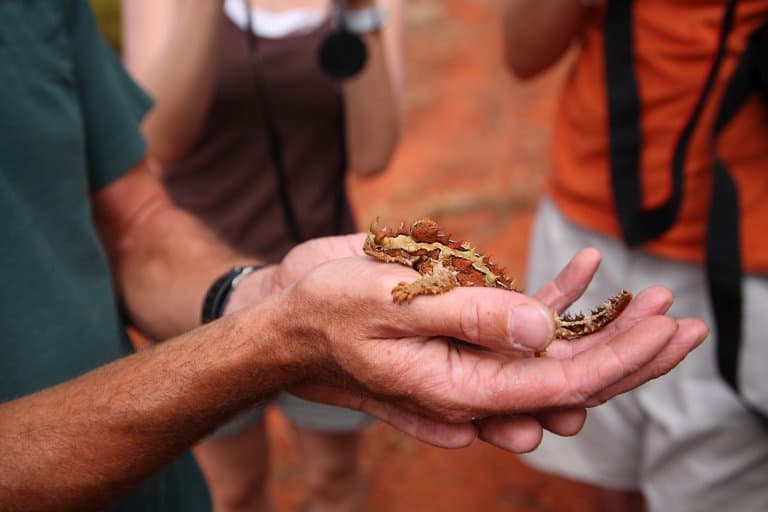 3. The thorny devil uses camouflage as self defence, as its outer body colours blends in with the surrounding habitat.

It is actually able to change colours to take on the shades of desert browns and tans. The colour changing mechanism is dependent on a number of factors including weather, time of day and actual location. In addition, the unusual gait used by this lizard involves a freezing and rocking motion that it employs when seeking food, water and mates.

This means they spent a lot of their time, searching or eating their dinner. They use their sticky tongues to capture them, before they crunch them up and swallow them.

5. The thorny devil can puff up by filling its chest with air to appear larger to predators.

This increases the size of the lizard to scare off predators, and make themselves harder to swallow.

6. They have been recorded running up to 60 kilometers per hour (37 miles per hour).

They generally freeze still when they believe there is a potential threat, but they are able to run rapidly away from any predators if necessary.

7. They can drink water through their feet.

It has micro grooves and tiny channels on their skin, which enables it to collect water and for it to flow without assistance to their mouth to drink. They often walk through dewy landscapes, or just wait for rain water and allow it to drip onto their backs, which is channeled through to their mouths.

8. The thorny devil lay eggs in a nest underground.

A clutch of between three and ten eggs is laid between September and December. A nesting burrow of about 30 centimeters underground is where the eggs will stay until they hatch about three or four months later. The survival rate depends on whether or not the eggs or young lizards are captured by wild birds and goannas.

9. Females are bigger than males.

This is actually quite common in the lizard world. Also, the female is slightly paler in colour. The male has a somewhat redder colouring.

10. You can determine if the thorny devil is warm or cool by its colour.

Regardless of gender, thorny devils will change from a paler colour to a much darker shade as they cool down.

11. They are named after a human sacrifice god.

The scientific name of the thorny devil is ‘Moloch horridus’, which was inspired by John Milton’s poem ‘Paradise Lost’. In the poem, the caananite god ‘Moloch’ was associated with human sacrifice. The Latin word horridus can mean rough or bristly. 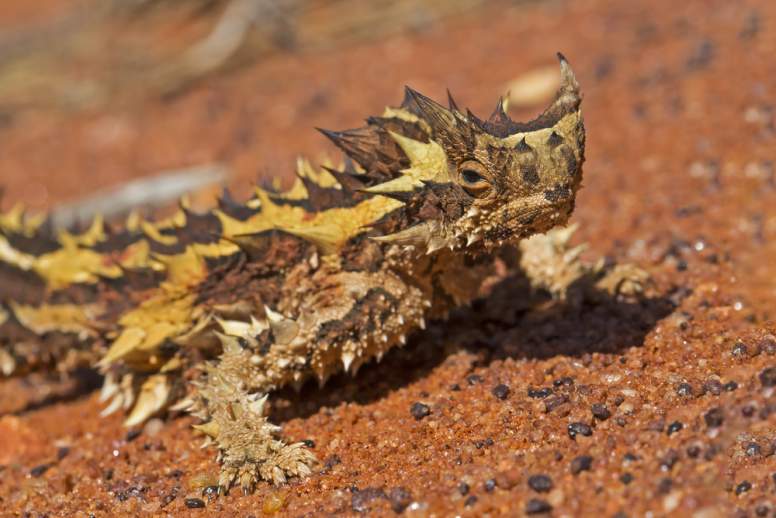 12. The thorny devil has a very long tail that it uses like an extra leg or tripod for stability when faced with predators.

If a larger animal attempts to flip the lizard over, it will use its tail by placing it against the ground to prevent it from falling over.

13. The thorny devil has an elaborate ritual of courtship.

Females are usually attracted when a male walks in an unusual gait, waves his legs and bobs his head all as a routine used to find a mate.

14. Baby thorny devils are pretty much on their own as soon as they hatch.

The incubation period varies, depending on the heat, but once the babies hatch, they are left to fend for themselves.

15. Although the sand lizard is not considered endangered, the population has had a decline but not just from predators capturing and eating them.

Many thorny devils perish on the highways that stretch across Australia. It is not unusual to see a few of them end up as road kill. In addition, because of their appearance, many are mistaken to be twigs and are taken by birds. 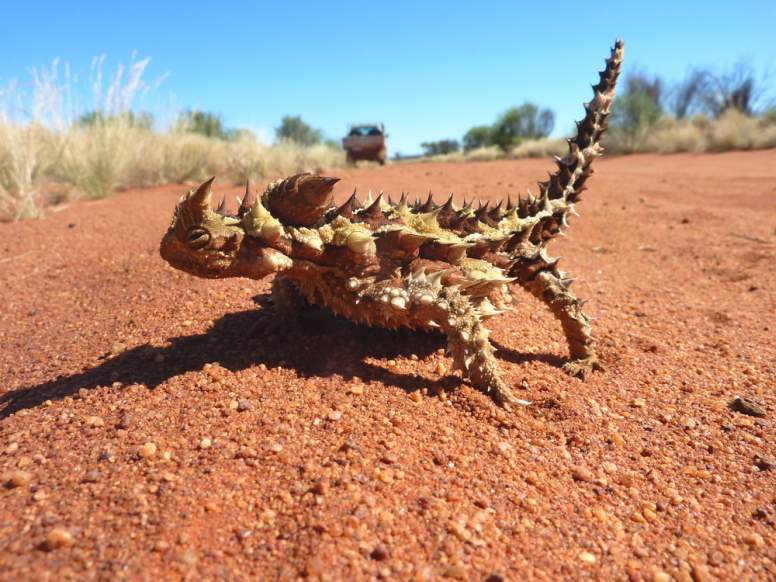 16. The thorny lizard does have a layer of protection that has nothing to do with the scaly skin it has.

In Australia, the only place on Earth where the thorny devil can be found, it has been protected for several years as part of the Wildlife Conservation Act of 1950.