Crocodiles are large reptiles that habitat the tropics of the Americas, Australia, Africa and Asia. Europe is the only continent that they don’t natively live in.

They are members of the order Crocodilia, which also includes alligators, caimans, and gharials.

Crocodiles are semi-aquatic and live in wetland areas, freshwater rivers or lakes, or saltwater –  residing in estuaries, lagoons, or mangrove swamps, rather than far out at sea.

Some species are active during the day, while other species are only nocturnal. Crocodiles mostly hunt at night, are carnivorous animals and very efficient hunters, with excellent hearing and eyesight.

They are aggressive, ambush predators, waiting for their prey to venture close to their hiding position, before rushing to attack. A crocs diet mostly includes other animals, reptiles, birds and fish.

1. Crocodiles are carnivores, which generally means they eat only meat. However, a recent study proved they also enjoy an occasional taste of fruit.

The 2013 study concluled “there is little doubt that on occasion, fruit is deliberately consumed, often in large quantities“, along with their normal meat-heavy diets of mammals, birds, and fish.1

2. Crocodiles can go through 4,000 teeth over a lifetime.

Crocodiles have between 60-110 teeth. When a crocodile loses a tooth, there is a small replacement already on standby. They are able to replace each of their 80 teeth up to 50 times over their lifespan. 2 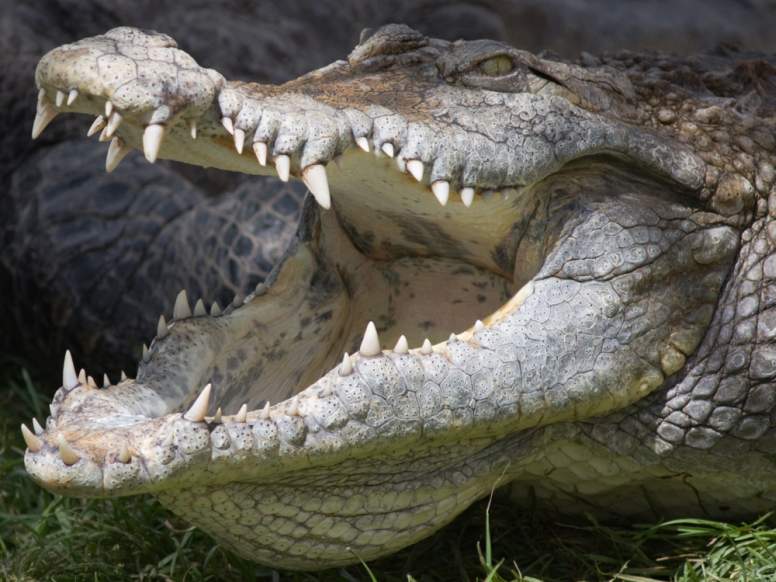 3. A crocodile’s jaws can apply 5,000 pounds of pressure per square inch – the strongest bite of any animal in the world.

A human’s jaw only produces 100 pounds of pressure per square inch in comparison. A crocodiles bite is 10 times more powerful than a great white shark.3

4. Crocodiles have relatively weak jaw opening muscles, which can be held shut with just a rubber band, or your bare hands.

Although, that’s not advisable! However, it has enabled scientists to study them closer!

5. An easy way to tell the difference between a crocodile and an alligator, is when a crocodile closes it’s mouth, all teeth are visible – as the upper and lower jaw are the same width.

Whereas an alligator possesses small depressions in the upper jaw for the lower teeth, meaning they are not visible when their mouth is shut.4

6. Another key difference to an alligator is snout shape. Alligators have wider, U-shaped snouts, while crocodiles are more pointed and V-shaped.

Crocodiles are generally a little more aggressive, and often larger and stronger, too.

‘Lolong’ was a saltwater crocodile and the largest ever in captivity.5

8. Crocodiles don’t sweat. To keep cool, they open their mouths which is known as “mouth gaping,” very similar to panting. 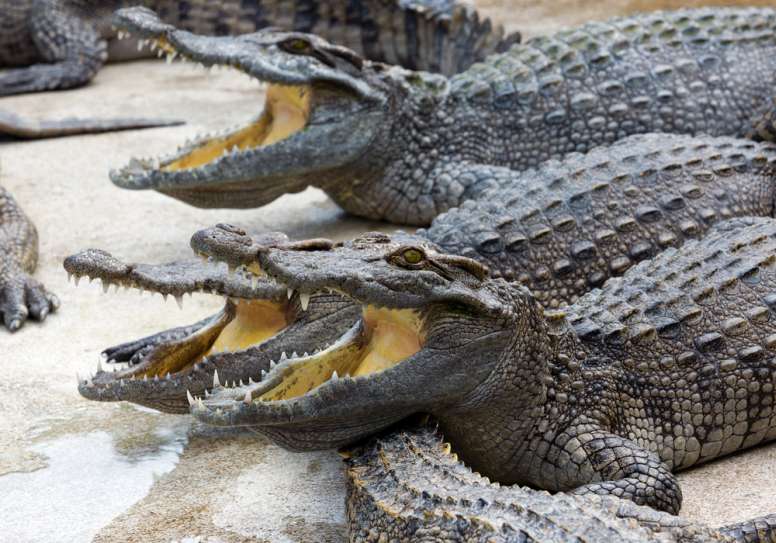 9. Crocodiles are extremely fast in the water, swimming up to speeds of 35 kilometers per hour (22 mph).

They use their powerful tails to propel themselves through water, and their feet as rudders to steer.6

10. It’s a common myth that crocodiles can run fast on land. They can ‘belly run’ up to 17 kilometers per hour (11 mph) for short distances.

Crocs tire easily on land and prefer to stay in water, coming ashore only to bask in the sun, or to lay eggs.

11. Crocs can hold their breath underwater for more than an hour.

Cambridge researchers have shown that this ability depends on a tiny fragment of the animal’s haemoglobin, which is the protein that carries oxygen from the lungs to the rest of the body. 7

12. Crocodiles swallow small stones to improve digestion. These stones help grind up the food in their stomachs.

Swallowing stones (known as ‘gastroliths’) is especially beneficial for crocodiles that eat their prey whole, or for tougher animals with shells and bones. A gastrolith can remain inside the stomach for years.

13. The expression to cry ‘crocodile tears’ (to display insincere or a false display of emotion), derives from crocodiles shedding tears, while they eat their prey.

While this was originally an ancient belief, studies have shown that crocodiles eyes do water while they eat, but not with remorse – for biological reasons, due to the hisses and huffs during feeding.8

14. Crocodiles have acute senses, an evolutionary advantage that makes them highly successful predators.

Crocodiles are mainly nocturnal hunters and have excellent night vision. Their sense of smell and hearing are also extremely well developed.

15. Crocodiles have been known to occasionally cannibalize smaller crocodiles.

There have been recorded cases of larger crocodiles eating smaller, or younger crocs.9

16. Crocodiles are ambush and opportunistic predators, capable of preying upon large mammals, such as smaller elephants, hippos, sharks or big cats.

17. Crocodiles have the most acidic stomach of any vertebrate.

This allows them to dissolve and digest bones, hooves and horns or shells from their prey.

18. Crocodiles perform a ‘death roll’ to overcome prey, clamping on using their jaws, and spinning around powerfully.

The spinning motion of the roll disorientates the prey, dragging them under the water and helps separate limbs from the body of larger animals to easily ingest. 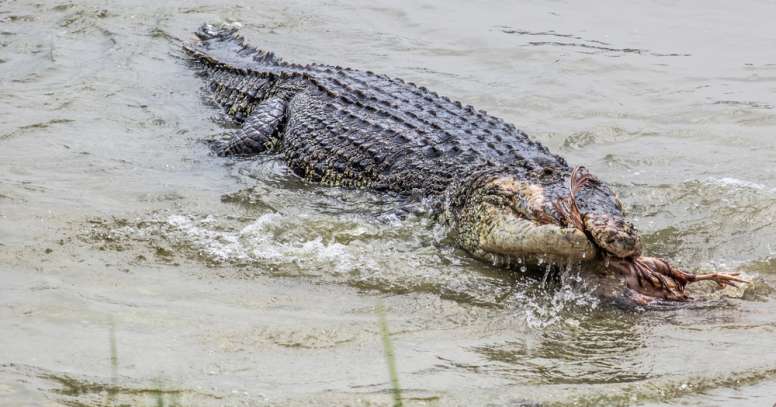 19. Crocodiles vocalize to communicate. The young of some species squeak and grunt, while adult crocs can growl, hiss or roar at each other.

Many species will also respond to other noises, such as engine noise, gun shots or even people mimicking crocodiles.

20. Crocodiles can sleep with one eye wide open.

Only some other reptiles, birds and dolphins can do the same. They generally sleep with two eyes closed, though.10

21. Larger crocodiles can go for over a year without eating a meal.

A croc’s metabolism is super efficient, using and storing nearly the entirety of the food it consumes.  In extreme circumstances, they are able to shut down and live off their own tissue for a long period of time.

22. Worldwide, crocodiles are estimated to kill about 1,000 humans per year.

Hundreds of those crocodile attacks occur in Africa, often in small commuinities where they not widely reported.  11