The alligator is about as close as one can get to seeing a modern-day dinosaur.

Early alligator ancestors appeared more than 200 million years ago and, approximately 80 years ago, crocodilians (the group that encompasses alligators, crocodiles, caimans and gharials) appeared during the Cretaceous period.

The term “alligator” translates into a Spanish word that means “lizard”. There are two species of alligator in the world—the American alligator and the Chinese alligator. 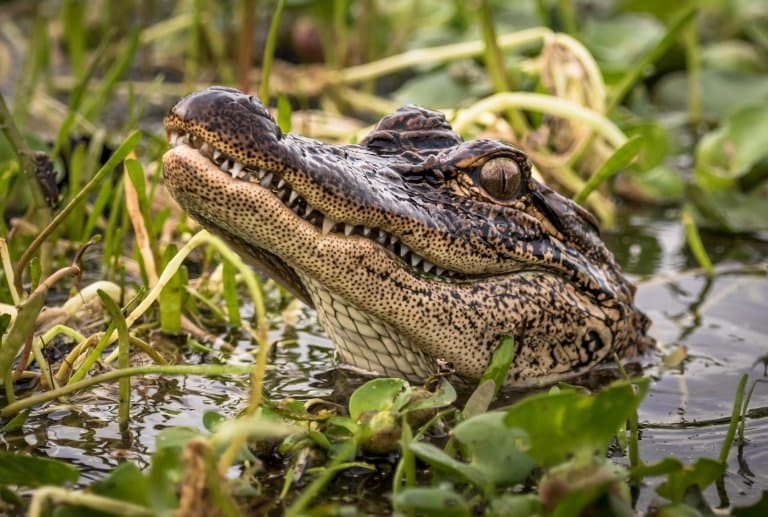 As large reptiles, alligators are cold-blooded and carnivorous. The Chinese alligator lives in certain parts of China, while American alligators roam areas in the southeastern United States and Mexico.

Both males and females possess muscular tails and bodies armored with touch skin. The bony plates that protrude from their dorsal surfaces are called osteoderms.

American alligators grow up to around 13 ft (4 m) in length on average, but can grow even larger towards 14 ft (4.5 m) and weighing as much as 1,000 pounds. The Chinese alligator is far smaller in comparison, and usually averages around 7 ft and (2 m).

Larger male alligators are solitary, while smaller alligators tend to stay in close social groups near to each other. They fiercely defend their territory.

Alligators diet on fish, reptiles, birds and smaller mammals they can kill with a single bite. They do sometimes pull animals into the water to drown them, before consuming. They are an apex predator and have been known to attack larger animals such as panthers and bears.

The conservation status of the American alligator is of least concern, however the Chinese alligator is classified as critically endangered due to habitat destruction and contamination of food sources.

1. A group of alligators is called a congregation

They will also work together to protect their young. 1 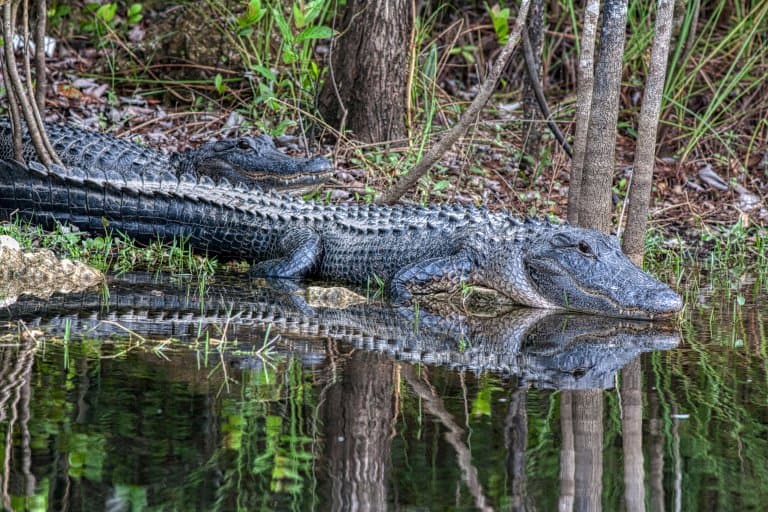 2. They can regrow parts of their tail

It was recently discovered that, like other reptiles, alligators are capable of regrowing up to nine inches of their tail.

After an injury, their bodies regenerate cartilage, skin, and connective tissue. 2

Pregnant females will build a nest of vegetation to protect and hide their eggs.

Nests can vary in size, ranging from seven to 10 feet across. Each clutch can contain 35 to 50 eggs, but clutches of close to 90 eggs have also been found.

4. You can tell them apart from crocodiles based on their teeth

Unlike crocodiles, alligators have an overbite and rounder snouts. This overbite makes it so that, when the mouths of alligators are closed, their bottom teeth are barely visible.

Crocodiles have pointed V-shaped snouts and teeth that interlock externally. When their mouths are closed, you can see both rows of teeth. 3 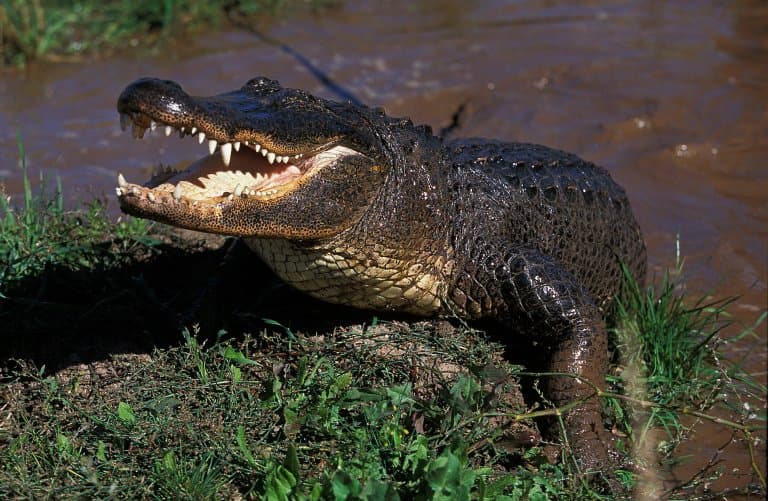 5. They communicate through a range of different sounds and vocalizations

Alligators hiss when they are threatened to intimidate their opponents.

They can also roar loudly by expelling air out of their lungs. These roars are so loud, they can be heard from as far as 150 meters away.

6. Temperatures determine the sex of offspring

The sex of juvenile alligators depends on the temperature of the nest they are laid in.

7. Their teeth continuously fall out and regrow

At any one time, there are around 80 teeth, and a single tooth can be regenerated up to 50 times.

8. They have been observed balancing sticks and branches on their heads to attract birds

This is to lure their prey towards them as sticks and branches are used by birds as nesting material. When the bird swoops down, the alligator strikes! 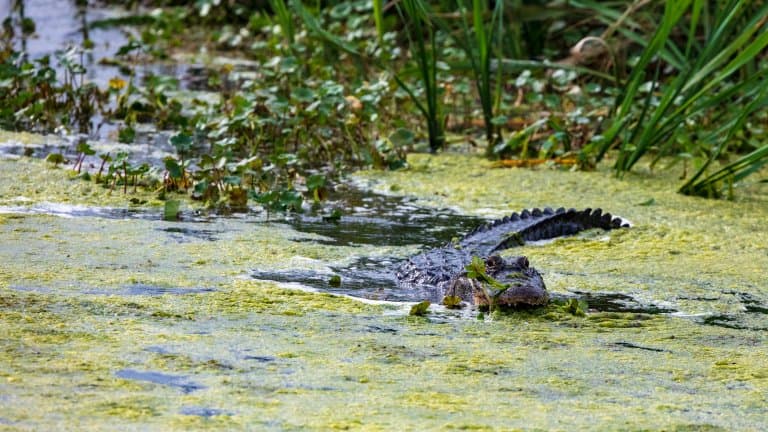 9. Alligators can perform a ‘death roll’

By gripping their prey in their jaws and spinning wildly until bite-sized chunks are torn off.

This allows them to consume the meat in more managable portions.

10. They have webbed feet

On their back feet, alligators have four webbed toes that help them swim and control which direction they go in.

11. They have two forms of movement called a ‘sprawl’ and ‘high walk’

The sprawl is when their belly makes contact with the ground and is used to transition to “high walk” or to slither into water.

The high walk is an up-on-four-limbs where the belly doesn’t touch the ground and they can run forward over land. They are capable of short bursts of speed in this form!

12. Offspring will stay with their mothers for quite some time before becoming independent

Juveniles will remain with their mothers for up to two years after they hatch.

During this critical period, the young alligators will learn how to hunt. Once they reach approximately four feet in length, the juveniles will be safe from predators and venture out on their own. 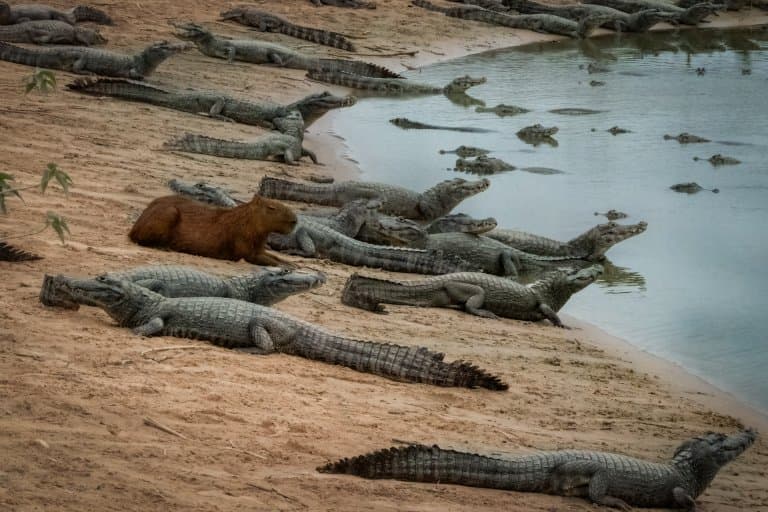 13. When temperatures drop, alligators lie dormant for months at a time

As cold-blooded creatures, alligators have to rely on external sources of heat to survive.

When temperatures drop below 21 °C, they will stop feeding. At temperatures below 13 °C, such as during the winter months, they will enter a dormant phase where they sleep in mud tunnels to keep themselves warm.

There have been reports of an alligator that measured 19 ft (nearly 6 m) in 1890 on Marsh Island Louisiana, although it was left behind after being killed.

15. Alligator meat is consumed in some parts of the United States

Alligator meat is considered to be high in protein and low in fat.

It is consumed in parts of the United States, particularly in the Southern areas. It can be deep-fried, roasted, smoked, and stewed.

16. American alligators used to be endangered

Once threatened by extinction, American alligators are somewhat of a success story. In 1967, their populations were increased via hunting prohibitions and habitat protection efforts.

Since then, their numbers have increased dramatically and, in 1987, their conservation status was changed.

17. The alligator is the official state reptile of Florida

In 1987, the alligator became the official state reptile of Florida. It represents Florida’s wilderness, swamps, and lakes. 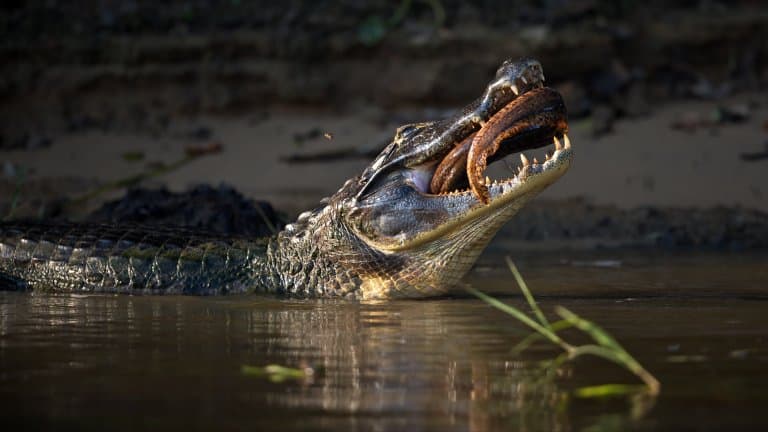 This law was introduced to avoid alligators losing their fear of humans and associating humans with food, which could be dangerous.

19. There are very few Chinese alligators left on the planet

With less than 100 left, the Chinese alligator is considered to be critically endangered by the IUCN. Sadly their populations are rapidly declining, due to habitat destruction and contamination of food sources. 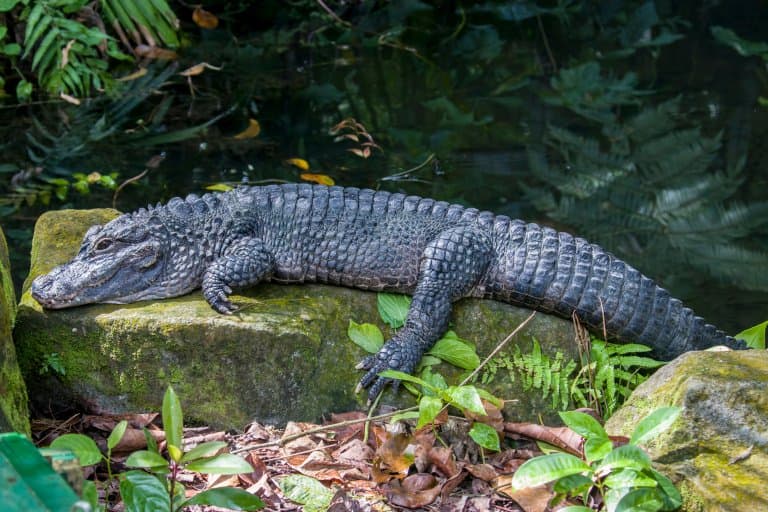 20. 6 extinct species of alligator are known from fossils

Many of these lived in the USA where their fossils have been discovered, particularly around the Nebraska and Florida regions.

21. They have been known to appear in swimming pools, golf courses and even peoples houses in the USA

While unusual, as habitats of alligators and humans cross in the US, they do come into contact! Fortunately there has been just 5 recorded human deaths from alligator attracks since 2020.

At least two of these occured when a person fell into a pond, or ventured into a pond and were subsequently attacked.