The gharial is one of two crocodilians from the Gavialidae family that is known for its narrow, elongated snout and sharp, interlocking teeth.

They are sometimes referred to as ‘gavial’ or the fish-eating crocodile due to their diet.

Typically found in a few isolated areas of northern India, they once used to span across Bangladesh, Myanmar, India, Bhutan, Pakistan, and Nepal. By 1976, its range decreased to about 2% of what it once was, and it was estimated that only 200 gharials remained.

Among the 23 extant species in order Crocolidia, the gharial is the only living species within its genus. 1

Crocodilians, along with birds, are the closest living relatives to the group Archosauria, which included dinosaurs. In fact, gharials possess several unique characteristics that have allowed them to outlive their ancient cousins.

Gharials are agile in water with flattened, muscular tails and webbed feet that help propel them. Like all modern crocodilians, gharials possess sharp teeth that are replaced throughout their lifetime. They have unique, elongated snout that is highly specialized to catching fish in rushing waters.

They also have a cerebral cortex, which is the outer most layer of the brain and essential for perception and memory. These adaptations have made them incredible hunters, allowing them to hunt prey by following movement patterns.

1.    The Gharial gets its name from an Indian pot

Gharials are the only crocodilian where males and females look different. When males reach sexual maturity, they develop a cartilaginous knob at the tip of their snout. This bulbous nasal protuberance resembles an Indian earthenware pot known as a ‘ghara’. The word was misread by Europeans as gavial. Hence, the species being known as both gharial and gavial. 2 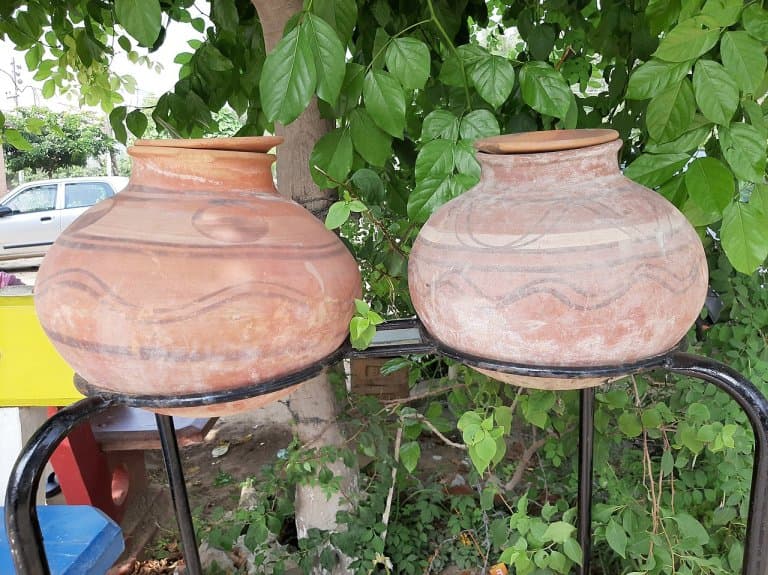 2.    It is one of the world’s largest crocodilian

Male gharials typically reach 15 to 20 feet and weigh about 2,000 lbs. Females are generally smaller, usually growing between 11 to 15 feet. The largest gharial in captivity was 20.5 feet long! 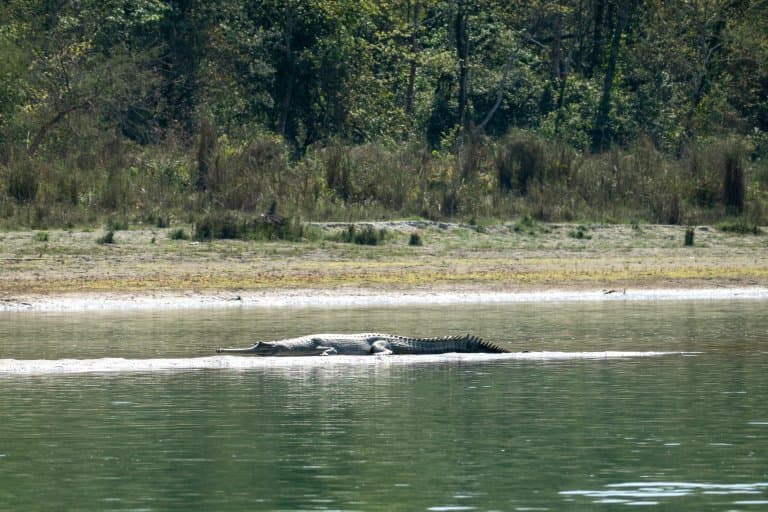 Female gharials will dig a hole and lay their eggs on the banks of the river. Eggs typically hatch in 90 days. However, not all the eggs will make it. Predators like pigs, monitor lizards, and mongooses often dig up the eggs for food. However, sometimes many babies can hatch! 3 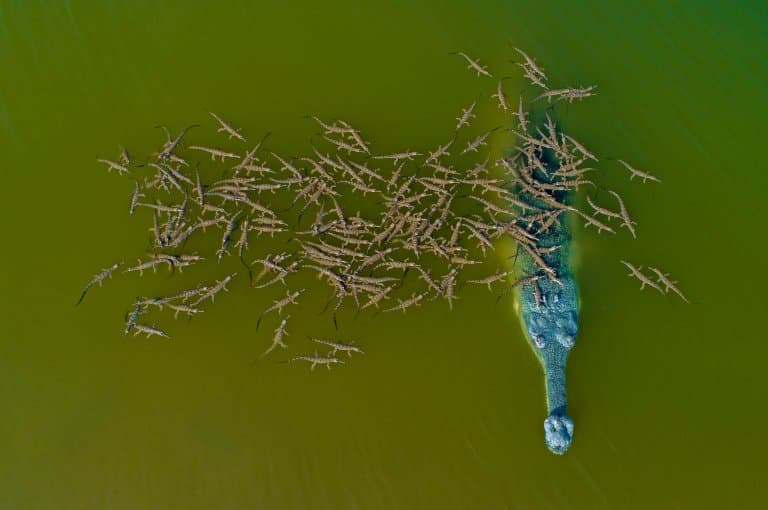 4.    Males will blow bubbles to attract a mate

Males will use their gharas to blow bubbles and produce a buzzing sound during the courting phase. This action is known as “bubbling.” 4

5.    Hunted for its skin and medicinal purposes

Historically, gharials were often killed for their skin. The eggs and gharas were also believed to have medicinal properties. Today, hunting still continues, however, when it comes to being a threat to the gharial’s survival, it has been surpassed by loss of habitat and pollution.

6.    They are simultaneously revered and feared in Hindu mythology

Gharials, and crocodiles in general, are revered as a vehicle of the gods in Hindu mythology, and are associated with existence and fertility Crocodiles are also seen in the Hindu calendar, representing the tenth of the twelve lunar months. 5 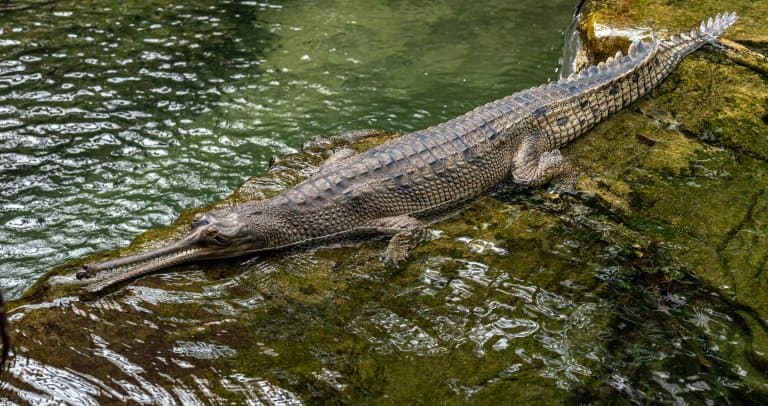 Gharials are polygamous. There is usually male in a territory with four to six other females. Gharials are considered less aggressive than other crocodilians, however, the resident bull will guard their territory, engaging in fights to keep rival males away.

8.    Gharials lay the largest eggs of all crocodilians

Mating typically occurs between January and December. During the dry season (March and April), female gharials will dig a nest on the sandy banks of the river and lay their eggs. Each egg is about 3 .5 inches long (90mm) and weighs roughly 5.5 oz (160 g).

9.    Gharials have more teeth than any other crocodilian

While most crocodilians have roughly 66 teeth on average, gharials have a mouth full of 110 interlocking teeth in their long, narrow snout. The teeth on the upper and lower jaws both project outward, with the teeth at the front of the mouth being the largest, perfect for catching fish in the water. 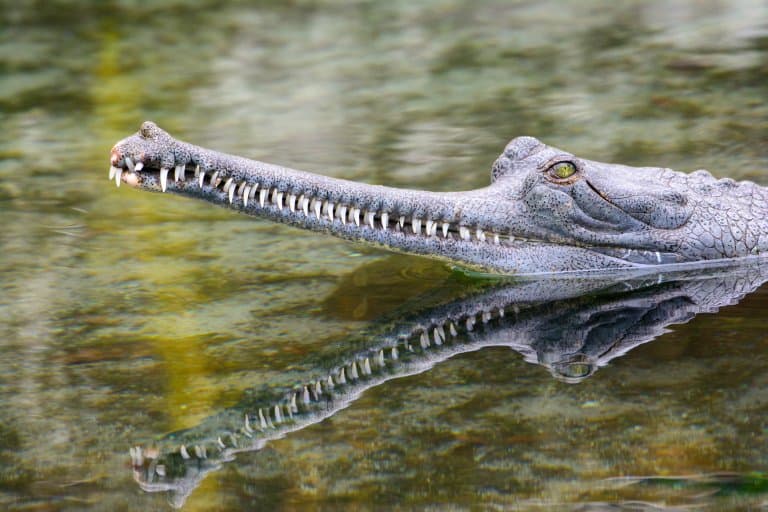 Unlike most crocodilians, gharials don’t have the ability to high walk. In fact, their legs are so weak that they cannot lift their bodies off the ground, and instead, resort to sliding around on their bellies.

However, this doesn’t mean that gharials can’t move around well at all. In fact, they have adaptations that allow them to move smoothly through swift waters, making them the most aquatic crocodilian of all.

11. Are known as an indicator of a clean river system

Gharials will often feed on weak or sick fish in the river. They also scavenge on dead animal matter. This helps to keep fish populations healthy and keeps the river system free from contaminants in the water. 6

Gharials jaws aren’t built for locking down on large prey like their cousins. In fact, gharials are actually considered to be one of the least aggressive crocodilians. Attacks on people are extremely rare, and typically only occur when a mother is trying to protect her nest. Among those recorded, none have resulted in the loss of life.

However, they are known scavengers and will gulp up the occasional cadaver. As part of a Hindu custom, corpses are often sent down the Ganges River. Gharials will often take advantage of this custom and get themselves an easy meal. 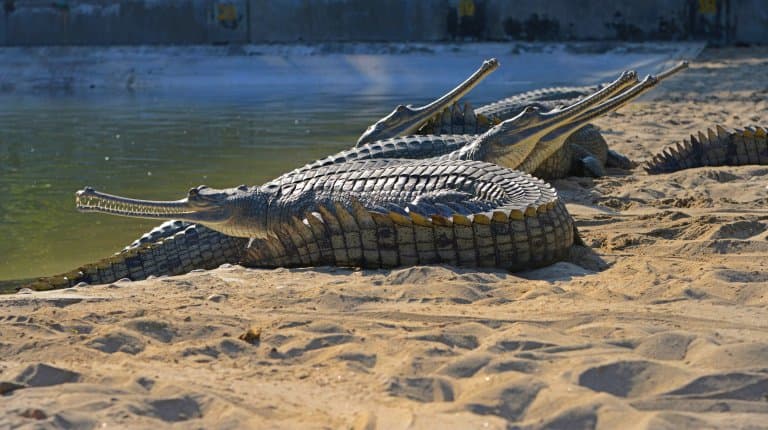 13. They have night vision

Gharials have a mirror-like structure at the back of the eye called the tapetum lucidum, which enhances their night vision and can even reflect some light that isn’t absorbed. This is why their eyes can glow when a torch is shown on them at night!

14. Unfortunately, the species is at risk of extinction

Due to the loss of habitat, hunting, and manipulation of river flow, gharials are classified as critically endangered. Less than a thousand adults are estimated to remain in the wild.

However, with the help of conservation efforts, more an more Gharial hatchlings are being spotted on the banks each season. 7