Elephants are the largest living land mammals on the planet, that habitat sub-Sharan Africa, South Asia, and Southeast Asia.

They are the only living member of the family Elephantidae and the order Proboscidea, which once contained the now extinct Woolly Mammoth, and American Mastodon.

Elephants are herbivorous animals that live in various areas, including savannahs, rainforests, deserts, and marshes. They tend to stay close to water sources.

Elephants are known for their trunks, which are actually a long nose used for smelling, breathing, trumpeting, drinking, and also for picking up things, like a meal.

Elephants can also have tusks, which are present for both male (bulls) and female (cows) African elephants, and Asian male elephants. Asian females either have very small tusks, or no tusks at all.

There are three recognised species of elephants – The African bush elephant (also known as the Savanna elephant), the African forest elephant and the Asian elephant.

The African elephants used to be considered one species, until genetic studies concluded that they were separated between 2-7 million years ago.

African elephants are typically significantly larger than their Asian elephant cousins, with bulls growing up to 13 feet (4 meters) tall and weigh between 4,000-7,500 kg, while Asian elephants reach no more than 11.5 feet (3.5 meters), and weigh less, between 3000-6,000 kg.

The African elephant is on the left, in comparison to the Asian elephant, on the right.

Both Asian and African elephants migrate, and generally follow the same migratory routes annually in search of favoured climate for water, and food.

Sadly, the elephant population has slowly decreased since the turn of the 20th century. At that time, African elephants numbered in the millions, and Asian elephants totaled about 100,000.

Currently, the African elephant population is down to an estimated 300,000 and are considered vulnerable by the IUCN. Asian elephant’s numbers range from 40,000 to 50,000 and are listed as endangered.

Elephants form deep, intimate family bonds and live in groups, known as a herd. These herds have a matriarchal head, which means the oldest, and usually largest, female in the group will lead the herd. She is referred to as the matriarch. A family usually includes the mother, her sisters, daughters and their babies.

The size of the herd will depend entirely on the size of the family and the terrain they have chosen to live on. Normally a herd of elephants can number between 8 and 100, however there have been recorded aggregations of up to 1,000 around watering holes.

The entire matriarchal herd will protect a newborn calf, and help to raise it. Males have a very different behavior pattern. They usually leave the herd between the ages of 12 and 15 after reaching puberty. Males who have left the family unit will either live temporarily with other males, or may just be alone for the rest of their lives. Even after pursuing and selecting a female mate, a male elephant will then resume his predominantly nomadic and solitary life, to roam alone.

Elephants typically eat leaves, grasses, bark, roots and bamboo and can spend 16 hours a day collecting food. They will also eat various ground crops, including sugar cane and bananas. The average adult elephant can consume between 300 and 400 pounds of food daily.

1. Elephants are the largest living land animals on earth. 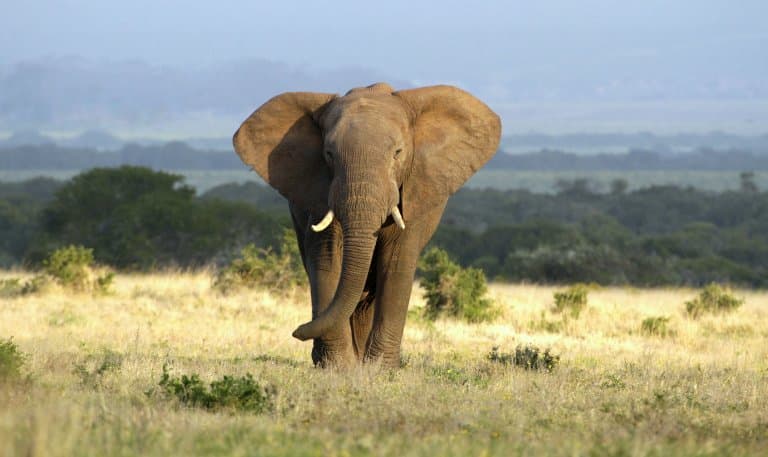 2. Elephants have the largest brain in all of the animal kingdom.

Their brains can weigh up to a whopping 5.4kg. Size doesn’t necessarily equate directly to intelligence, however evidence suggests that elephants are some of the most intelligent, social and empathic animals on the planet.1

3. Elephants can hear and communicate through the ground.

They can communicate long distances by foot stomping, and creating a low-frequency rumble that generates seismic waves in the ground that can travel nearly 20 miles.

The sensitive skin in an elephant’s trunk and feet helps them to pick up the message, and interpret them as a warning, or distant danger.

4. Elephants can hear the sound of approaching clouds.

Their hearing allows them to sense low-frequency rumbles, and communicate in ‘infrasounds’, which are sounds with pitches below the range of human hearing.

These infrasounds are produced in the same way as humans speak, via the larynx. The frequencies are as low as the lowest notes of a pipe organ, which cannot be heard by humans. 2

5. An elephants graveyard is a mythical place, where legend says elephants walk to die alone at a certain age or time.

However, these so-called elephant graveyards are entirely natural and often result from environmental factors, like drought or poisoning. 6. Elephants are the strongest animals alive, and can lift up to 770 pounds (350 kg) with their trunks.

Elephants have long been used to transport people and goods, and they have been heavily utilised in the logging industry.

There are reports that elephants have lifted as much as 1,100 pounds (500 kg) of tree logs, by leaning back and using it’s weight for more power.

7. Elephants can’t use their trunks right away.

A newborn elephant calf trunk has no muscle tone. This means that it will have to suckle through its mouth.

Although the calf will eventually gain full control of its trunk, it won’t happen until it is several months old. It takes calves time to learn to use them, and at first they often tread on their own trunks. 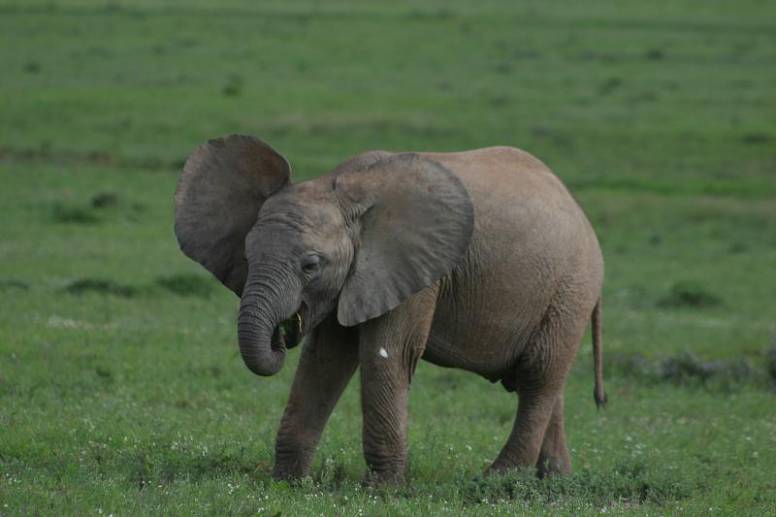 8. An elephants tusks are modified second incisors in the upper jaw, which replace their milk teeth between 6-12 months old.

The visible, ivory part of the tusk is made of dentine with an outer layer of enamel and are essentially no different to other teeth.

An elephants tusks are used for digging, debarking trees, moving trees and branches when clearing a path and for attacking and defending when fighting.3

10. When on the move, a heard of elephants often walk in single file.

The matriarch elephant leads the herd, while her siblings and their offspring follow behind. Calves will follow mothers obediently, sometimes holding onto their mothers tails with their trunks to keep up. 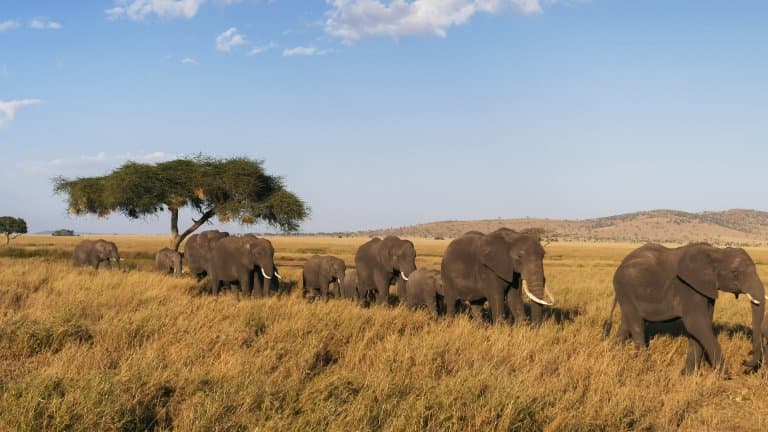 11. Elephants are the only animals that have an in-built snorkel.

By raising the tips of their trunks above the water’s surface, elephants can cross rivers totally submerged walking on the river bed.

12. There have been many observations of elephants showing altruism and empathy towards other species.

They are known to become friendly with humans, dogs and other animals.

There have also been reports of elephants rescuing other animals from wild predators.

13. Elephants can sleep standing up

Elephants only need a couple of hours of sleep each day, and while they can sleep standing up – they do lay down every few nights to sleep.

14. Elephants curl up together and sleep.

This elephant family was captured sleeping together by a drone. Awww. 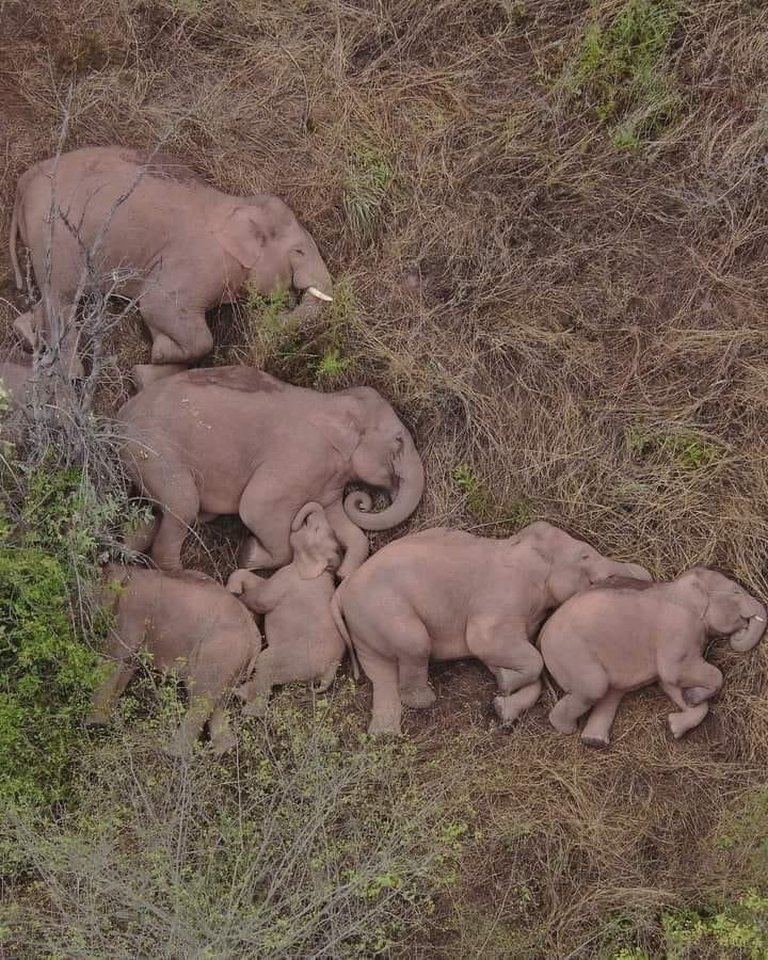 15. Elephants use mud as sunscreen to protect their sensitive skin from ultraviolet light.

While it’s skin is 2.5cm (1 inch) thick and generally tough, it’s extremely sensitive, and requires protection from the sun and insect bites. 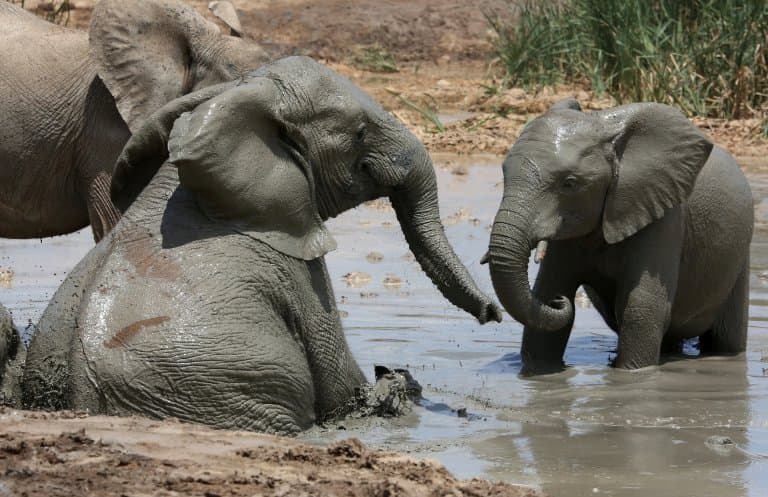 16. Elephants are emotional creatures, that mourn the dead and grieve. They can also shed tears, and often try and bury their dead.

Elephants have been observed staying with the dead in apparent mourning, and appear to experience grief similar to that of humans at the loss of a relative.4

17. Elephants are strong swimmers and have been recorded swimming up to 50 kilometers across water, and can swim for six hours continuously without rest.

Experts believe that elephants swam from Southern India to Sri Lanka where they settled.5 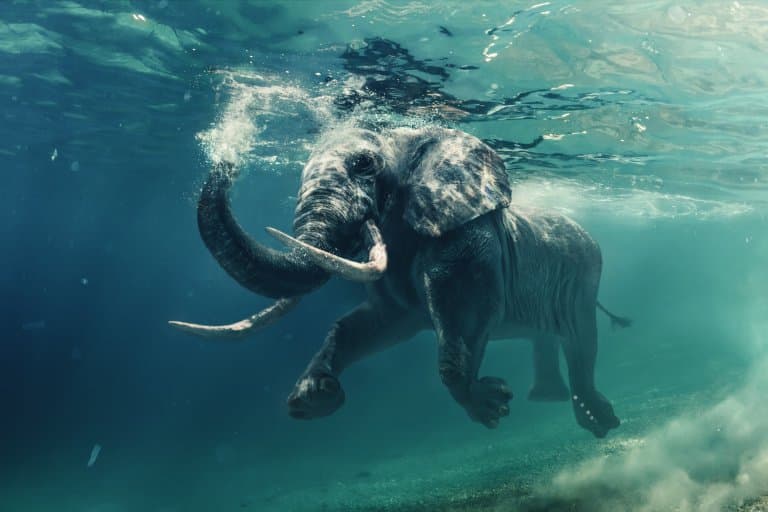 18. Wild elephants walk between 3.2 – 12.0 km a day, in comparison to elephants in captivity in American zoos, which walk on average of 5.3 km each day.

How far an elephant will walk depends on the age, sex, season, availability of food and much more. 6

19. Female elephants have the longest pregnancy of any mammal at 22-months, and give birth to BIG babies.

A litter for the average elephant family consists of one calf. Although twins are born, it is rare. The newborn calf will weigh between 200 and 250 pounds (90 to 115 kg).

20. The saying ‘an Elephant never forgets’ holds some truth.

Elephants have incredible memories. Two elephants were observed seemingly recognising each other, after crossing each others paths at a circus, some 23 years earlier. 7

21. Elephants have ‘fingers’ on the end of their trunks. An African elephant has two trunk tip fingers, where as the Asian elephant only has one finger on the tip of its trunk.

Due to this, the African elephant is able to pick up objects delicately, while the Asian elephant can only scoop up objects by using its entire trunk.8 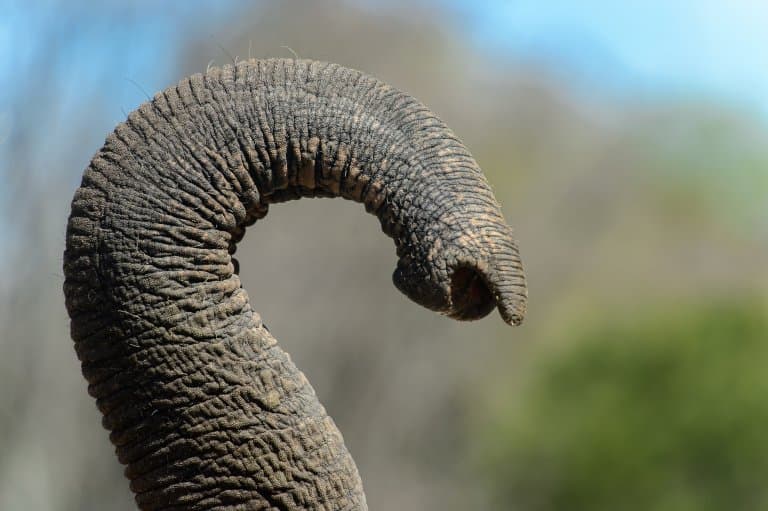 22. The Asian elephant population has declined by over 50% in the last three generations.

The main threats to the Asian elephant today are habitat loss, degradation, and fragmentation, largely due to an expanding human population.

Poaching is also a threat, due to their valuable tusks and other body parts for leather or meat. 9

Although it is illegal and in some countries and the penalties are stiff, poaching for ivory has continued to contribute to the drop in numbers of wild elephants in the world.