Pangolins are shy, nocturnal mammals that are completely covered in plate-like scales, and often referred to as ‘scaly anteaters’.

They inhabit woodlands and savannas in Southern, Central and East Africa, and Asia.

The majority of the population have never heard of the pangolin, but they are the world’s most trafficked mammal, due to the high demand of their scales, and meat. Their meat is considered a delicacy, while their scales are said to ‘cure’ illnesses in traditional Asian medicine. 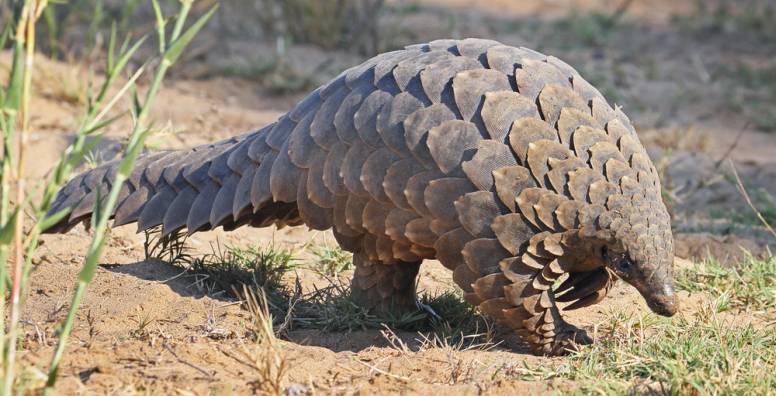 There are a total of 8 living species of Pangolin, which either live in trees or burrows, differ in colour between dark brown to olive, and range in size, depending on their species.

They are members of the order Pholidota, and family Manidae, which includes Manis, consisting of 4 species living in Asia, and Phataginus and Smutsia, which both have 2 species each, which inhabit Africa.

Pangolins are insectivorous, which means they eat insects – and their diet mainly consists of ants and termites, which they capture with their extremely long sticky tongues.

All eight species of pangolin are on the IUCN red list of threatened species, mainly due to illegal poaching for their meat and scales and destruction of their natural forest habitat.

1. The Pangolin is the only known mammal in the world to have hard overlapping scales, that cover their entire body

20% of a pangolins weight is made up of hard scales. Their scales are very different to those of a reptile, and are more like a pine cone in appearance. 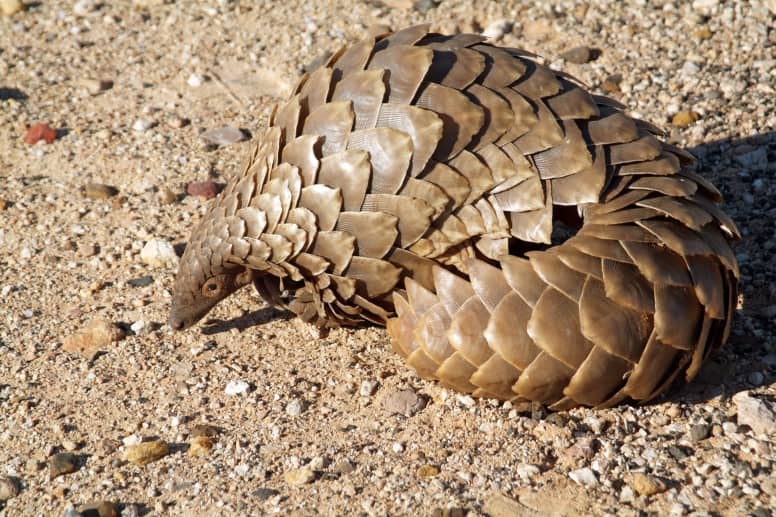 They are hard and overlap, protecting the pangolin from predators.

2. Their scales are made of keratin, the same protein that forms human nails, hair and animals claws, or birds talons

When first born they are soft, they grow hard as a Pangolin matures.

3. When threatened, the pangolin rolls itself up into an armour-plated ball that protects it from predators

Similar to a hedgehog, the pangolin will roll up, protecting their soft furry bellies. Its face is also tucked under its tail. 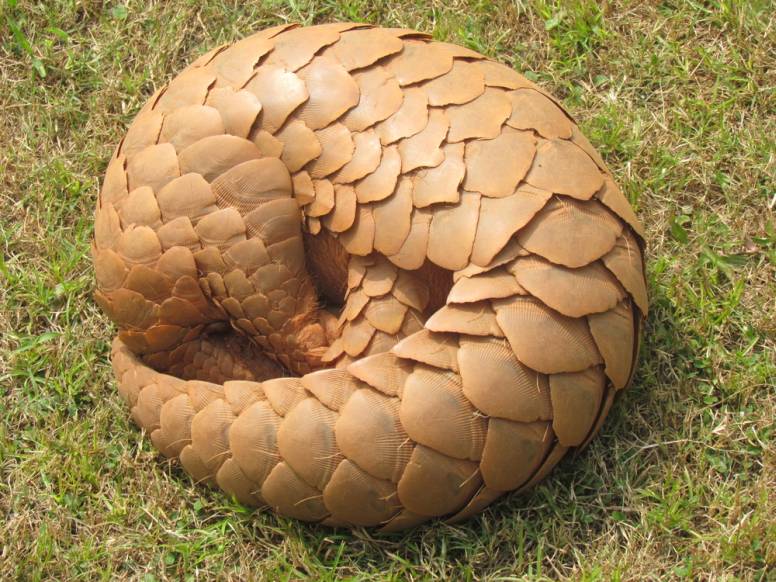 Its scales are sharp, for extra protection against predators. Sadly, this doesn’t protect them from humans, who can merely pick them up.

4. Even big cats can struggle to bite their way through a pangolins armour

Their curling into a tight ball defence confuses big cats, and their sharp scales cut into the mouths.

Predators often give up and leave the pangolin alone.

This means they can walk on their hind legs with the front limbs and tail held off the ground used as a counter-balance. This is due to their long, curved powerful claws on their forelimbs, which are not as efficient to walk on. 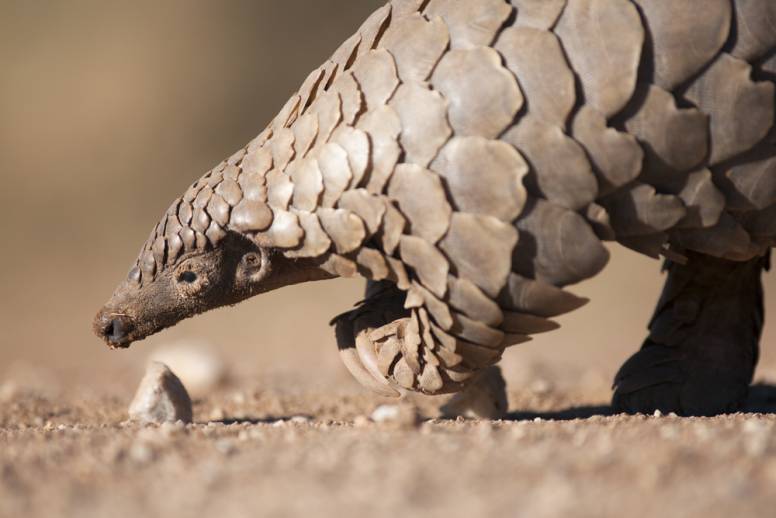 They often rise on their hind legs to sniff the air.

6. The pangolin is thought to be prehistoric and is estimated to have lived on earth for nearly 80 million years

They were originally thought to be a member of the Xenarthra family, which includes the similar-looking anteaters, sloths and armadillos.

However, new studies suggest they are closer to the carnivora, which consists of hyenas, bears and wolves.1

7. A pangolins tongue can be as long as its body

Their tongues are extremely long and thin like anteaters, and when extended can be as long as 40cm (14 in). 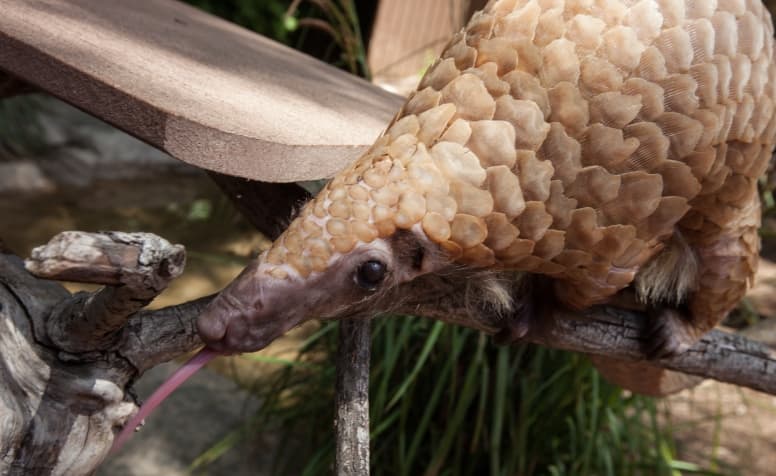 They are also very sticky, which allow pangolins to collect ants and termites with precision when probing inside insect tunnels.

A pangolin has no teeth, as they simply don’t need them to consume small insects, such as ants and termites. They have powerful front legs and sharp claws to help them disturb termite mounds, or burrow and climb trees.

9. The name pangolin means ‘something that rolls up’

The ground pangolin got its name from the Malay word ‘pengguling’, meaning ‘rolling up’, in reference to how they can roll into a ball, when threatened.

10. They can emit a noxious-smelling chemical, similar to skunks

While they are unable to spray the liquid at predators, they do release the stinky fluid from their glands when defending themselves, and use it to mark their territory.

11. Some species have prehensile tails that allow them to hang from branches, and help them climb trees

The long-tailed pangolin in particular spend much of their time in trees. 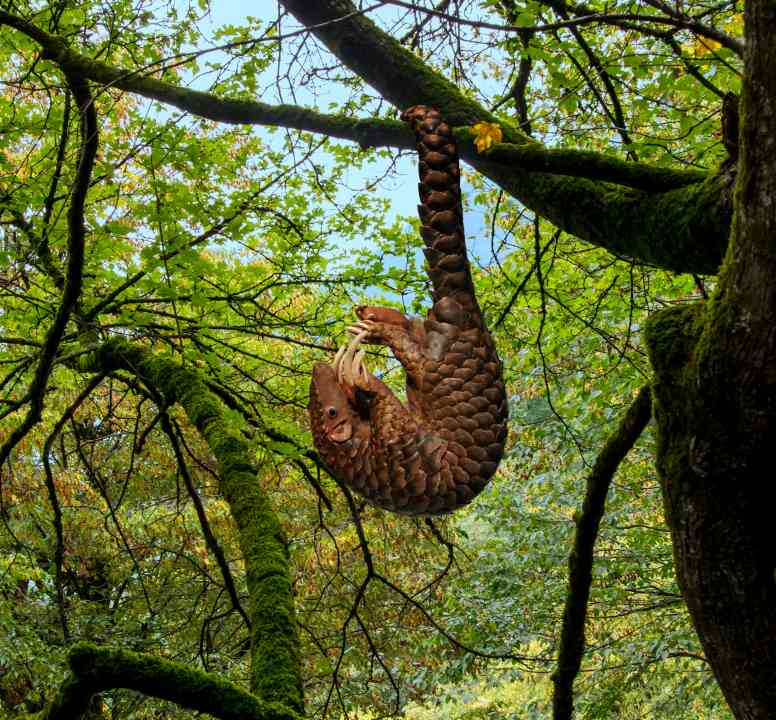 These stones help grind up the food in their stomachs. Swallowing stones (known as ‘gastroliths’) help grind up ants and termites.

This is similar to how some reptiles, such as crocodiles improve digestion.

13. They can constrict their ears and nostrils while feeding to help keep insects out

This allows them to stick their faces deep into termite mounds, without having to worry about insects crawling inside them.

14. A pangolin is estimated to consume more than 70 million insects per year

Researchers estimate that a full grown pangolin will eat about 200,000 insects per day on average.

They have been hailed with the title of ‘pest controllers’, due to their ability to regulate the insect population numbers, which is particularly beneficial for crops. 2

15. Pangolins have small eyes and poor vision, so they rely heavily on their sense of smell, and hearing

This allows them to sense both their prey, and when predators are in close proximity.

16. Pangolin babies ride on their mother’s back by clinging onto her scales

Burrowing species babies first venture into the outside world at around 4 weeks by clinging to their mother for a ride. 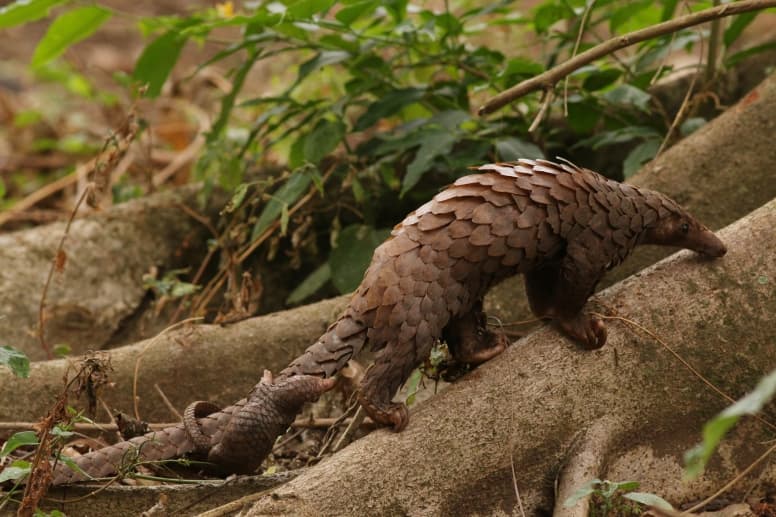 17. Asian pangolins can be distinguished from the African species by the presence of bristles, which emerge from between the scales

African pangolins don’t have bristles between their hard plated scales.

The number of scales varies between species, due to their sizes, but some species are estimated to have over 1k of their hard plated scale armour.

18. Pangolins are the most illegally traded wild animal in the world. One is poached every 5 mins

The IUCN say that over a million pangolins were caught in the last decade.

This illegal poaching and trade is driven largely by increasing demand from the Far East, mostly notably by China, and Vietnam.

Their meat is considered a delicacy, and their scales are used in traditional medicine.

The Guardian found that the average monthly wage for an Indonesian working full-time on a plantation is $47, and poaching pangolin can earn 10 times as much. 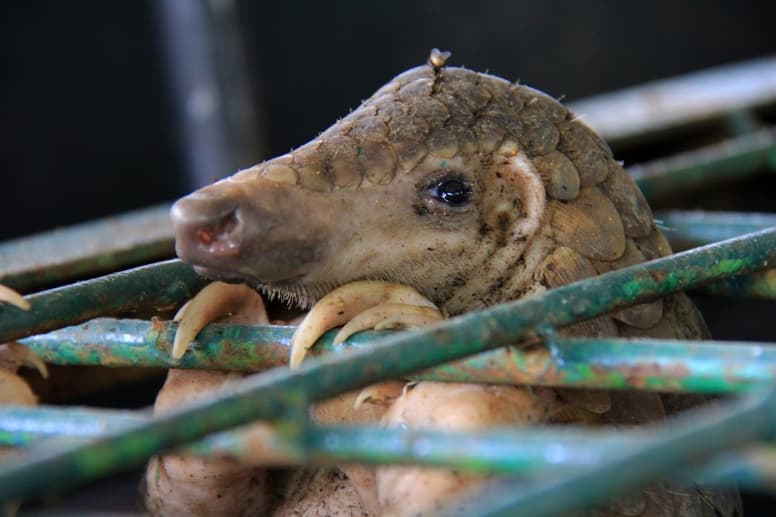 However, there’s no scientific evidence that pangolin scales or meat, has any medicinal properties.

In traditional Chinese medicine the pangolins blood and body parts have been used to treat anything from stomach disorders, to cancer and asthma.

The Chinese government has even permitted some hospitals to use pangolin medicines as treatment for patients.  4 5

A study found they are used to cure 42 conditions, from infertility, to stomach ulcers, to removing bad luck, or warding off evil forces. 6

22. 70% of pangolins do not live for more than a year in captivity

Commercial breeding has proven to be difficult, as pangolins do not fair well in captivity, due to their highly specialized diets and extreme sensitivity to capture enduced stress. 7 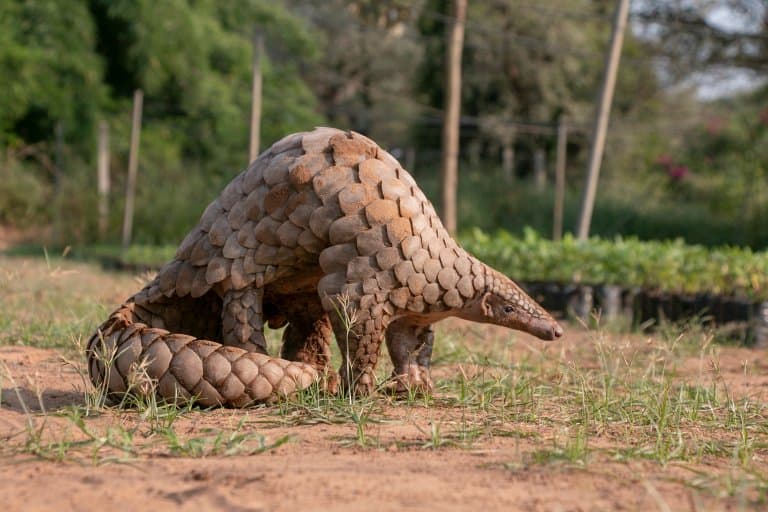 23. Sadly, all eight species may be on the brink of extinction

Due to the illegal hunting and poaching, the numbers of wild pangolin have dramatically declined.

While their exact numbers are not known, the rarity of sightings in the wild, coupled with the massive volume illegal trade suggests they are rapidly close to extinction.