Armadillos are known for their armored bodies and their ability to curl up into tight balls to defend themselves from predators.

They are fast diggers with pointy snouts and long tongues that allow them to search for insects underground. Their bellies are the most vulnerable part of their bodies. 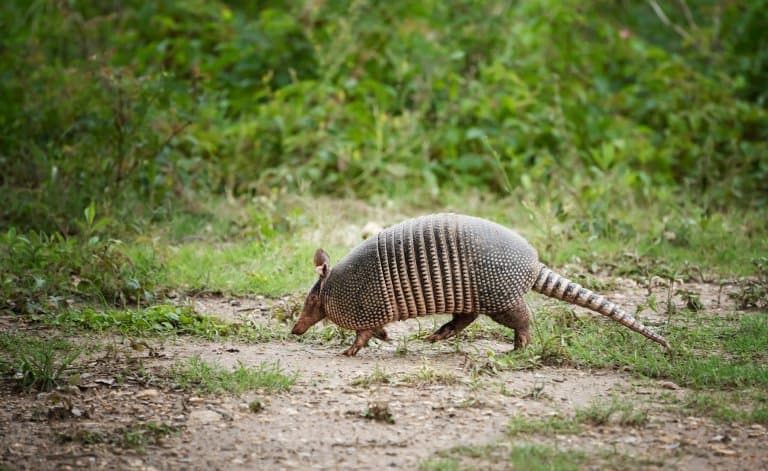 With a preference for warmer areas, armadillos tend to live in habitats near the equator, originally in South America. However, a small number of the family do now live in North America.

There are 21 species of armadillo and all of them are still present in South America, with 11 species residing in Paraguay.

Armadillos live in grasslands and forests and are selective when it comes to where they will build their burrows. Sands and loose soils make digging and foraging much easier. They are timid creatures and will often retreat to their burrows when they feel threatened.

Their diets between species vary a little, but generally they eat insects, grubs, ants and termites.

Most species of armadillo are healthy in populations and classified as least concern according to the World Conservation Union (IUCN). However, the giant armadillo and the Brazilian three-banded armadillo are vulnerable with with a risk of extinction due to habitat loss and over farming. The pink fairy armadillo is data deficient, but is also thought to be at risk.

1. Their shells are made of bone

Armadillo shells are composed of bony plates covered in scales. The part that covers their bodies is called a carapace and is made up of segmented bands.

Several of these bands are flexible, which allows the animal to curl up into a ball-like form when it feels threatened.

Depending on the species, armadillos can have a different number of bands. The nine-banded armadillo is the only species that can be found in the United States. 1 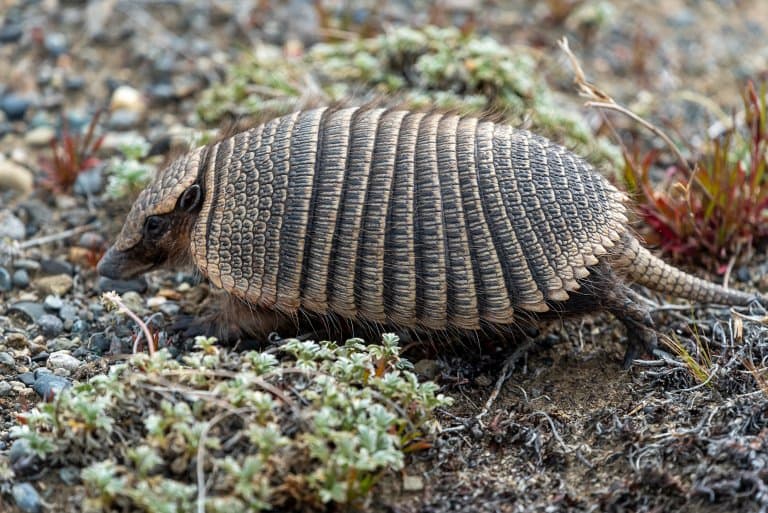 2. Most cannot curl up into balls

Not all armadillos are capable of wrapping themselves up in their armor. As a matter of fact, only one species—the three-banded armadillo—can curl up into a complete ball. 3. They have exceptionally sticky tongues

To help them reach deep into holes and latch onto prey, armadillos have sticky tongues that resemble that of anteaters.

Although armadillos are omnivores, the majority of their diet is made up of insects such as ants, termites, and beetles.

4. They have very poor eyesight

Armadillos have extremely poor eyesight. To make up for this, they use their strong sense of smell to navigate their surroundings and hunt. 2

5. Most are solitary animals

Groups of armadillos may form when the weather is particularly chilly, but armadillos are, for the majority, solitary animals.

Groups of five to seven have been found huddling together in underground burrows in lower temperatures.

6. Their names reflect their shells

In Spanish, the armadillo’s name translates to “little armored one”.

All armadillos have protective shells that cover their bodies and most also have rigid rings that protect their tails. 3

7. They can dig complex underground systems

During the day, armadillos situate themselves in underground burrows that can be 20 feet long.

These tunnels can lead to more than 12 different entrances to the surface. 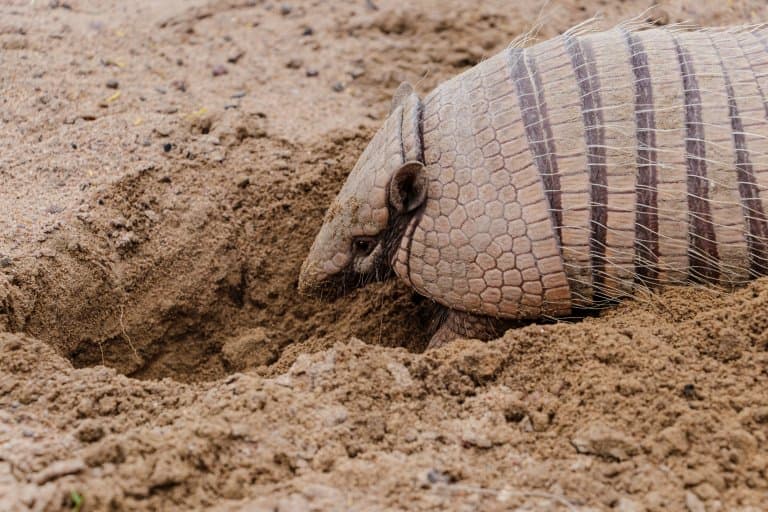 A litter of armadillos can range from one to 12 pups. Gestation periods can also range, spanning two to five months.

After birth, mothers nurse their young for a few months and the pups will reach full maturity around 10 months of age. 4 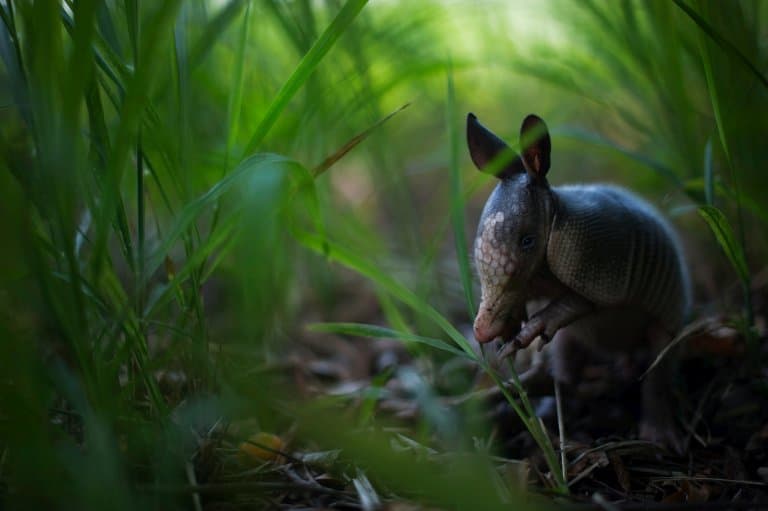 During this process, a singular embryo splits into four. Other armadillo species can form litters that vary in size from 1 to 12.

Armadillo pup shells are soft when born, with a leather-like texture. Over the next couple of days, their shells will harden into protective armor similar to that of their mothers.

In addition to being solitary animals, armadillos also like to sleep—a lot.

They are often found sleeping for 16 hours a day. During the hours they are away, they will forage for food. 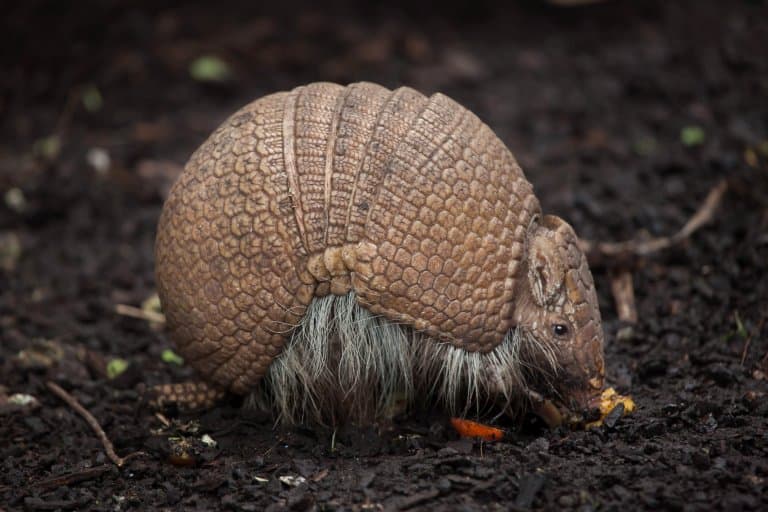 12. They can contract and transmit leprosy

Leprosy—also known as Hansen’s disease—is a bacterial condition caused by Mycobacterium leprae. It is transmitted between humans via droplets that are released from the nose and mouth and can lead to skin rashes, ulcers, and hair loss.

There is evidence that armadillos may also be able to carry the disease. In Brazil, it was found that people who eat and handle the nine-banded armadillo are more likely to possess antibodies against leprosy. 5

13. It is an official state animal

In the state of Texas, the nine-banded armadillo is the official state animal. It is known for its impressive swimming skills and ability to hold its breath for up to six minutes at a time. 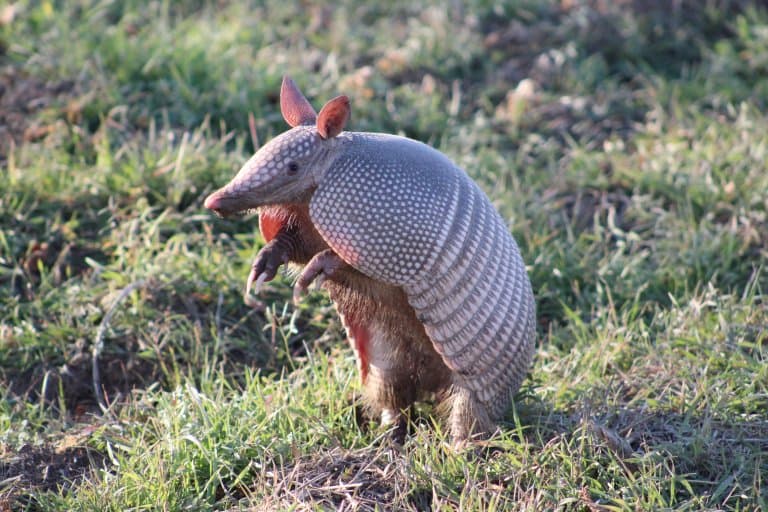 14. Its ancestors were huge

It is believed that armadillos alive today descended from glyptodons. Fossils of these giant animals have been found in North and South America. They are estimated to have been as large as modern-day rhinoceroses.