Kiwa are a genus of marine decapods that inhabit hydrothermal vents and cold seeps at deep-sea levels. They have three nicknames that are often used instead of their actual name – yeti crab, yeti lobster, or furry lobster.

These names come from the hairy and bristly appearance, that resembles that of the legendary snow monster Yeti. 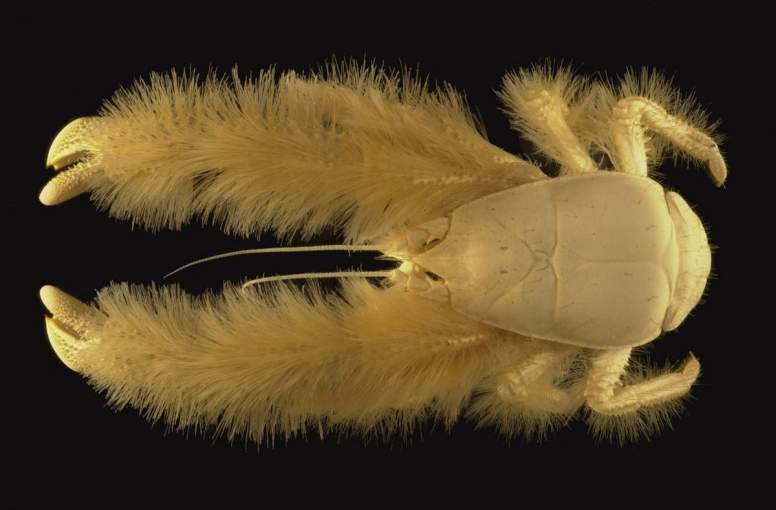 There are a total of five known species that exist in four different marine locations: the Pacific-Antarctic Ridge, the East Pacific, the East Scotia Ridge and the Australian-Antarctic Ridge. Two similar species are known to exist in the vents on the South West Indian Ridge and at the Galapagos.

Each of the different species differs slightly from each other. The water depth and temperature is also a contributing factor to differences between the species. As all are deep-sea dwellers, the conditions are mostly dark and very cold with warmer water coming from the hydrothermal vents creating the habitat for these creatures to live.

The average length of the yeti crab is 15 centimeters. Although it appears to be a carnivore, this creature eats bacteria that are fertilized on its own legs.

The digestive system is in the upper anterior portion of the body and a tube that extends to the telson serves as the gut. The antennal glands are flat and are in the ceohalothorax with the lobe of the antennal bladder covering a vast amount of the hepatopancreas.

Because there is not much known about these deep-sea creatures, their conservation status is unknown. They are not widespread as their habitat is in and around the hydrothermal vents that occur naturally on the sea floor.

They do not appear to have any obvious threats other than larger deep sea creatures that may prey on them as a secondary food source. Should water pollution cause damage to the hydrothermal vents in some way, the temperature difference will have an impact on the population.

1. The yeti crab farms its own food – on its arms

The hairy ‘arms’ of this tiny crab capture all kinds of bacteria that live and grow on the crab. To encourage growth, yeti crabs have been seen waving it’s arms back and forth in seeping vents.

As a result, the bacteria are the primary source of food for the yeti crab. 1

2. The deep-sea habitat of the yeti crab has had an impact on the development of the creature

As it lives solely in the dark, there is no color pigment present making the yeti crab appear white.

Also, the eyes of this creature have not fully developed which makes it virtually blind.

3. The yeti crab was only first discovered by a group of scientists in 2005

It was off Easter Island in the hydrothermal vents along the Pacific-Antarctic Ridge on the ocean floor. A second species was discovered in 2006, and four more have followed since, until the fifth in 2013.

4. It’s believed that the common Hermit Crab is a relative

The yeti crab is a ‘squat lobster’, which is more closely related to crabs, than true lobsters.

5. The yeti crab official name comes from mythology. The Polynesian goddess of shellfish was named Kiwa

The species name (hirsuta) references the hairiness of the creature.

6. The yeti crab lives in very small hydrothermal ‘envelopes’, with up to 600 crabs per square metre

The extreme cold temperatures of the deep-sea would kill the yeti crab, so the warmer hydrothermal vents create the habitat that sustains them.

“It was almost like a sight from another planet. The yeti crabs were literally in heaps around the hydrothermal vents — in densities in up to 600 per square meter — and all jostling and writhing around to get the best position in the hydrothermal fluid flow”.

Said Alex Rogers, a professor of zoology at Oxford University in 2012, after he led an expedition to the East Scotia Ridge. 2 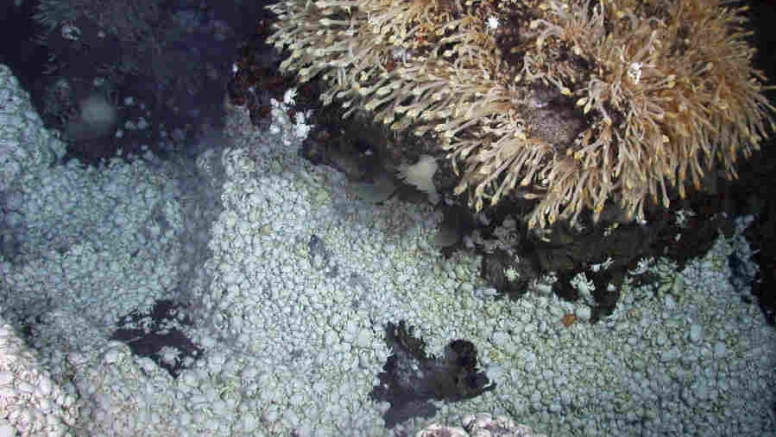 7. Waters are believed to be a warm 32C around the hydrothermal vents

This is in comparison to the more typical 2C found at the bottom of the ocean.

8. One species of yeti crab ‘Kiwa tyleri’ has a hairy chest, which inspired the nickname of the ‘Hoff crab’ by researchers

In honour of course, to the infamous David Hasselhoff, of Baywatch fame. 3

7. Scientists believe that the claw hairs – known as setae – are very likely sensors that assist the nearly blind creature to find food, and a mate

It’s thought they are not just used for farming bacteria for food. 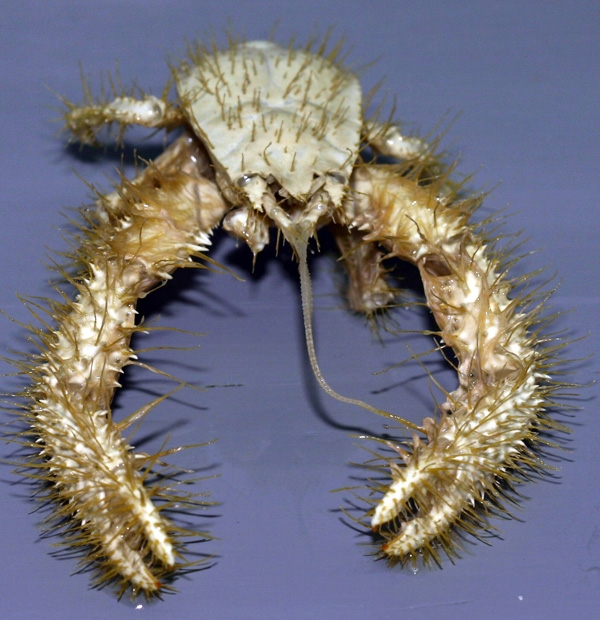 8. The claws of the yeti crab are a mathematical wonder

Known as chelipeds, the yeti crab claws are symmetrical. They are also as long as the carapace and all but the fingers are covered in fine hair.

9. There may be a little more to the diet of this creature than just bacteria grown on the hair of its claws

The movable part of the claw fingers happens to have a rather sharp cutting edge on it. Scientists believe that this cutting edge is used to tear flesh from prey.

10. There is some evidence that suggests yeti crabs will eat other creatures

There have been reports that the kiwa have been seen eating mussels.

However, the shells of those mussels were opened in order for the flesh to be consumed. Possibly the cutting edge of the claw finger of the yeti crab was used to do this.

11. The bacteria on the hairy claws of the yeti crab may serve another purpose beyond acting as a food source

Scientists point to the high concentration of bacteria on the hairy claws as potentially being used to detoxify the poisonous materials that exist in the water coming from the hydrothermal vents.

12. The main body – the carapace – of the yeti crab has unusual characteristics.

In addition to being about 1.3 times as long as it is wide, the yeti crab main body has a smooth surface. Featuring a slightly oblique front edge, there are small teeth that are located near the rostrum.

13. The unusual living conditions of the yeti crab have aided in its adaptation of its surroundings

14. As unusual a creature as this is, it does have similarities to other crab-like animals

The general structure and organization of muscle systems in the yeti crab are considered to be congruent with the same muscle system configurations of other decapods. Meaning, it’s not all that different to other squat lobsters.