They were made infamous by Steven Spielberg’s Jaws movie, which depicts a ferocious man-eating shark. In reality, they rarely attack humans and there has been under 100 documented cases in total.

They are found in oceans all over the world (except Antarctica), where they inhabit mainly coastal waters. 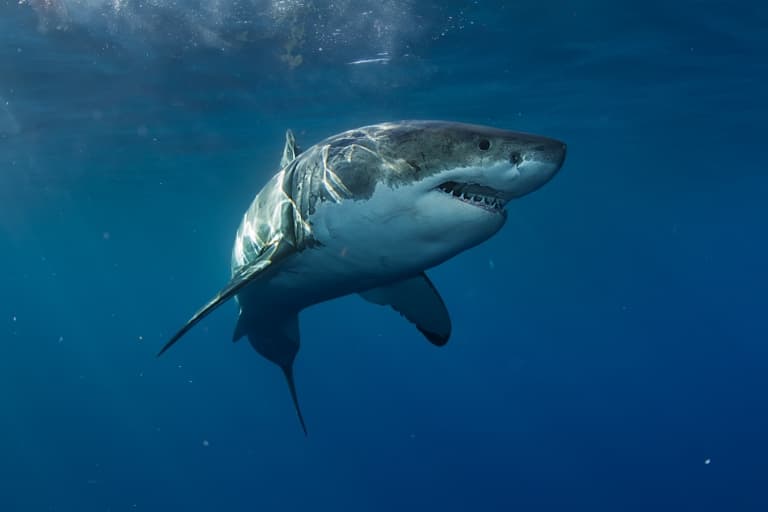 They are sometimes called a ‘great white’, or ‘white pointer’ in reference to their white underbelly.

They are apex predators and are famous for being incredible hunters. Their diet includes fish, marine mammals, sea turtles and seabirds. The only thing known to hunt great whites are orcas and other sharks.

They are primarily solitary, coming together mainly for mating. Although some pairs have been seen traveling together.

They are well adapted for hunting, with up to 300 serrated teeth, the ability to detect blood from 5km away and torpedo-shaped bodies that allow them to swim up to 57 km/h. They use these adaptations to attack their prey at high speed, often breaching the surface of the water.

1. Great Whites are the largest predatory fish on earth.

They are on average around 4.5m long, with the largest ones on record measuring in at a massive 7m. 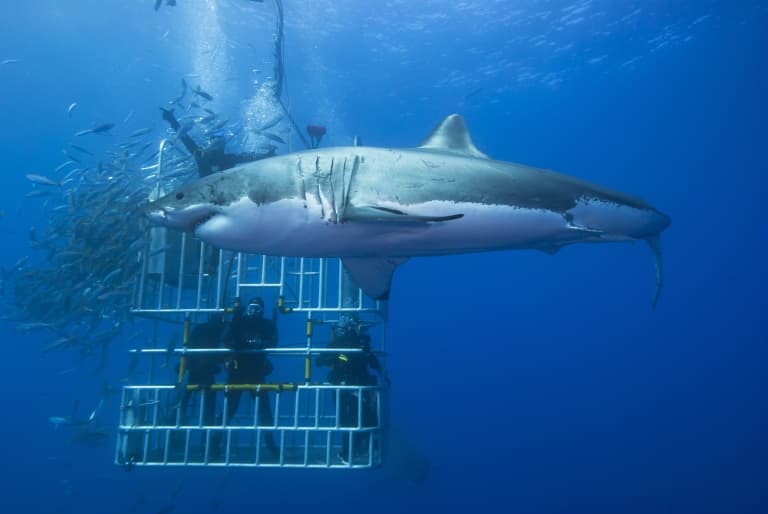 2. They are almost everywhere.

They can be found in all major oceans and the only place in the world they don’t hunt and live is Antarctica.

3. Sharks are much older than dinosaurs.

Sharks, in some form or another, have been around for over 400 million years, making an incredible evolutionary achievement. 1

5. They have up to 300 serrated, triangular teeth. 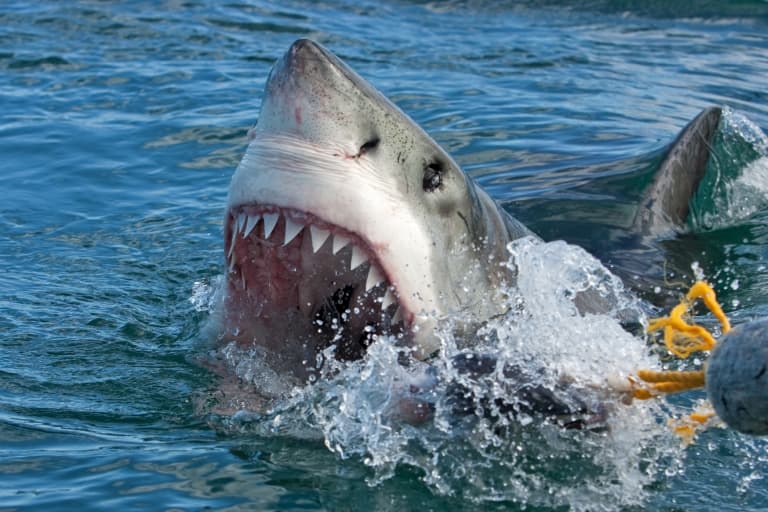 6. They infrequently bite boats – and sink them.

Great white sharks have been known to bite boats up to 10m (33 ft) in length, and even sink a rubber boat that are easily pierced by their razor sharp teeth and strong jaws.

They have bumped or knocked people overboard, usually biting the boat from the stern. In one case in 1936, a large shark leapt completely into the South African fishing boat Lucky Jim, knocking a crewman into the sea.

They are adapted to swim fast, with stream-lined torpedo like bodies.

The tops of their bodies are grey, to blend in with rocky coastal sea floors when seen from above. Their white bellies mean that when you see them from below, they blend into the sun shining from above. 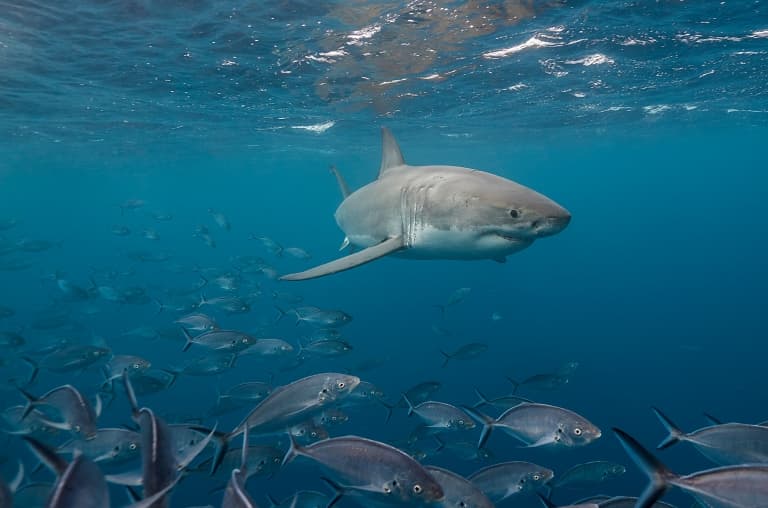 9. Great White sharks can smell blood from 5km away.

They are famous for being able to detect blood in small quantities, or from a long way away. They can also sense one drop of blood in 100 litres of water. 3

10. They can sense electrical fields in water.

This ability is known as electroception, and great white sharks are very good at it. They can sense one millionth of a volt in water! The main purpose of this ability is finding prey, as it means that sharks can sense the electrical fields of marine animals. 4

11. Great white sharks have glow in the dark eyes.

Just to add to their scariness, their eyes glow in the dark. They have a layer of reflective cells behind the retina which allows them to see better in the dark. 5

Another incredible biological feature of great whites is their highly toxic blood. Research has shown that the levels of arsenic and mercury in their blood are so high that it would kill most animals. Great whites however, seem to be adapted to this toxicity and are unharmed by it. 6

This incredible behaviour is called breaching. Sharks will swim rapidly towards the surface and fly as far as 10 feet into the air.

14. They live much longer than we used to think.

Previously estimates of shark lifespan were as short as 23 years, however research has shown that they can live to be 70 or more. 7

Baby sharks (called pups) initially grow inside an egg, but hatch while still in the womb. When they are born, they measure 4-5 feet and are completely ready for life. Straight away they swim off and hunt for small marine animals. 8

16. Shark embryos eat their siblings in the womb.

Shark embryos will eat smaller or weaker siblings in the womb. They also eat the mothers unfertilised eggs to keep growing. This means that the sharks that make it out of the womb are the strongest and most likely to survive. 9

17. Adults are cannibals, too.

Sharks are not generally social animals, and when they meet other sharks (especially if they’re smaller) they will happily make a meal out of them.

Great White Sharks are scared of orcas and with good reason as killer whales will hunt and eat sharks they encounter. They even know that great white sharks rely on their livers for buoyancy and will remove a shark’s liver with almost surgical precision.

19. They taste test with their tongue.

Their tongue is made with a type of cartilage called basihyal. They use this tongue to taste test food to see if they like it.

Shark teeth can move within the jaw, and they use this flexibility to understand what it is they’re biting. 10

Sharks are in fact very curious about their surroundings and things in the water. One researcher recalls on multiple occasions seeing great whites swimming up to brightly coloured objects (paddle boards, buoys etc) and often times taking a nibble of them. 11

Shark attacks on humans are very rare when considering the number of people swimming in the ocean every year and actual deaths are even lower. Between 2014-2018 there was an average of 82 unprovoked attacks and 4 fatalities per year globally. While rare, the Great White species is nevertheless responsible for the largest number of fatal unprovoked shark attacks on humans. 12

23. They don’t confuse humans for seals.

This is a common myth which is highly unlikely to be true. As opposed to the torpedo-like attack sharks use with seals, attacks on humans involve slow quiet approaches and they typically swim away after one bite. Most likely, sharks bite humans out of curiosity. 13 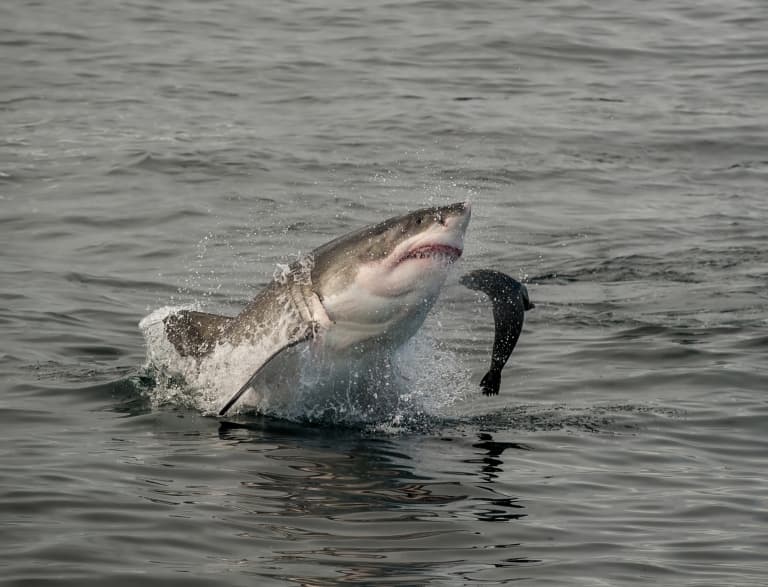 24. The Great White shark is in danger of becoming extinct.

Numbers have been massively decreasing in recent years, leading to them being labelled as vulnerable. This is because of human activities, with over-fishing and getting caught accidentally in fishing gear being two of the biggest causes. 14