These deep-sea predators are one of the most recognizable species of shark due to their strange shaped head known as a cephalofoil. 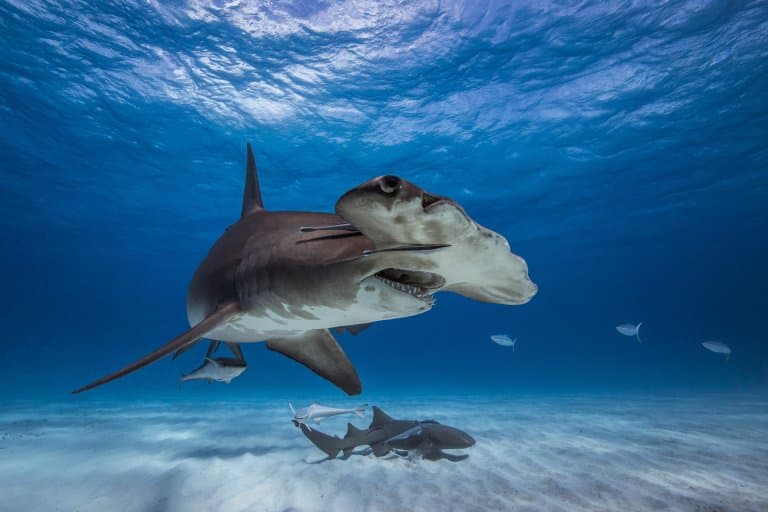 There are at least nine species of hammerhead shark in the world, although some studies may suggest more. Almost all of them are threatened in some form, many being critically endangered due to human activity.

These ocean predators are mostly known as carnivores, but some species may be omnivorous. They are often found on the ocean floor stalking prey, and often hunt for fish, squid, stringrays and seagrass.

They have one of the best ranges of vision out of all sharks, although their head shape has resulted in a blind spot directly in front of their noses.

1. The hammerhead part of the shark’s head is called a cephalofoil

The hammerhead shark’s cephalofoil serves many purposes. It can help them navigate and find food, and it can also help them swim by boosting the hydrodynamic shape of their body. 1 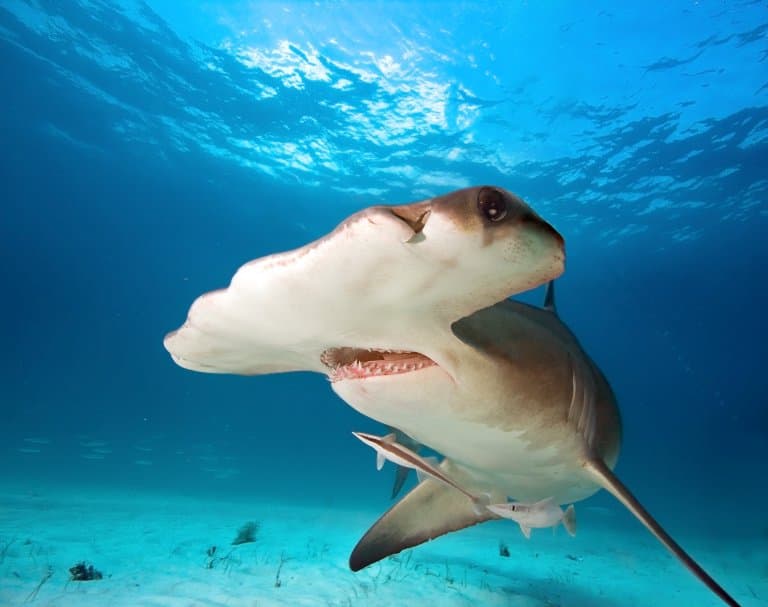 2. They use their head as a weapon when hunting!

There have been times that the hammerhead shark has been caught using their head to literally hammer down prey.

They’ll use the blunt force of their heads to tire down prey, making them easier to eat.

The number one prey of choice for the hammerhead shark is the stingray. In fact, they’re one of the most likely animals to be caught on the receiving end of this shark’s powerful hammering when hunting. However, in order to make a meal out of stingrays, the hammerhead shark has had to evolve a tolerance to stingray stings.

Stingray stings are a painful occurrence in the human world. Not only can they lead to extreme pain as well as other uncomfortable symptoms like fever or swelling, they can also be fatal. However, there has been at least one specimen of the great hammerhead shark – the largest of the multiple species – caught with the stingray’s barb still embedded in its skin. 2

4. Almost all species of hammerhead shark are critically endangered

The name “hammerhead shark” actually refers to an entire family of sharks known as “Sphyrnidae”, which includes a genus known “Sphyrna”. This genus includes nine different species of hammerhead shark, five of which are critically endangered.

The only hammerhead shark that isn’t threatened in any way is the Carolina hammerhead shark (Sphyrna gilberti), and only because it has yet to be assessed to see how its population is. This rarer species was only first described in 2013, so more information about their vulnerability will be available in years to come.

It’s hard to believe that one of the top predators of the ocean could be scared off by just a few bubbles, but it’s true! Despite their size and prowess, hammerhead sharks are actually quite bashful.

In fact, there’s many rules around swimming with hammerhead sharks just to help them feel comfortable and not flee. This includes not exhaling bubbles when they’re nearby. 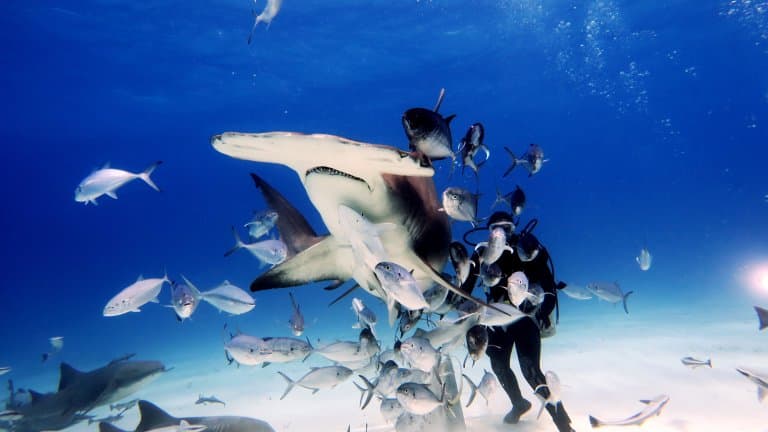 6. They can’t see in front of them

Now, this isn’t to say that the hammerhead shark doesn’t have excellent vision. In fact, they can have a complete 360-degree range of vision. This means that they can see everything below them and everything above them. But in front of them? Not so well.

The hammerhead shark’s hammer head is incredibly beneficial for hunting and surviving the depths of the ocean, but it does come with one disadvantage. Because of the positioning of their eyes, they have a blind spot right in front of their nose.

However, other than this little hiccup in their vision, the hammerhead shark otherwise has great eyesight. They even have better depth perception than many other species of shark.

7. The hammerhead shark will occassionally engage in cannibalism

Sharks have been around since the time of dinosaurs – literally. These prehistoric hunters can be traced back to at least 420 million years ago. However, the hammerhead shark hasn’t been around for that long.

Instead, scientists have traced the origin of the hammerhead shark back to around 20 million years ago. That’s still much longer than humans, however! 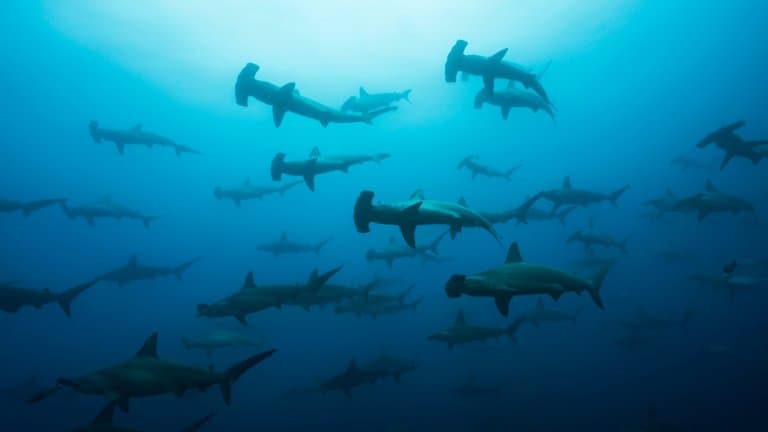 It’s not just their head that sets them apart from other sharks. On top of their unique hammer head shape, the hammerhead shark also has fins of different lengths compared to other sharks. This impacts the way they swim.

Most of the time, if you were to watch a hammerhead shark swimming out in the wild, you’d notice they swam at a slight angle. This is because their first dorsal fin is longer than their pectoral fin, which they need to swim efficiently. By tilting, they’re able to use their dorsal fin in their small pectoral fin’s place. This helps keep them moving, even with a unique body shape.

10. The winghead hammerhead shark has the widest head

They are so wide that they are known for getting caught in fishing nets due to it’s size. 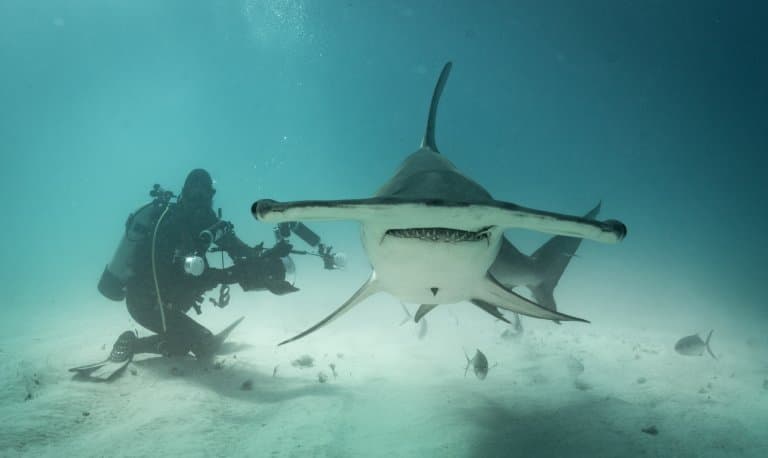 11. Cloning has been witnessed in hammerhead sharks

Well, cloning isn’t the exact word for it. Instead, certain species of hammerhead sharks, particularly the bonnethead, have been witnessed undergoing parthenogenesis. This means that a female shark was able to create offspring all by herself by fertilizing her own eggs.

This ultra-rare phenomenon is uncommon in species where it’s expected, like reptiles, and this particular occurrence was the first time it’d been recorded in a shark. 3

In fact, there are only 17 unprovoked attacks recorded on humans by hammerhead sharks since 1580 according to the International Shark Attack File – all without a single death.