Frilled sharks are long, eel-like sharks and they are some of the most primitive fishes in the ocean.

There aren’t many sharks alive that adopt this strange body type, and, relegated to some of the deepest parts of the ocean, these mysterious, ancient predators hold onto plenty of secrets about their ancient past.

Their six gills form a frill around their neck, giving them the name frilled sharks. 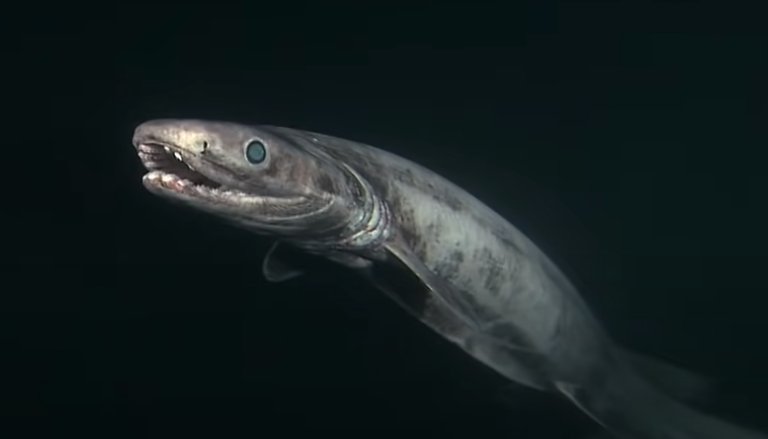 There are two extant species of frilled shark currently known, both listed as species of least concern.

Little is known about sharks in general, and the ones found in the deeper parts of the ocean are even more mysterious, but it’s thought that this branch of primitive sharks may be moved into their own order in the future, as scientists discover the extent of their ancient ancestry.

1. Frilled sharks may be in an order of their own

Taxonomy is difficult. Every year there’s some shift in understanding that makes all our books out of date. Second to various types of worms, sharks might be one of the most responsible organisms for this. Basically, when scientists don’t know much about a species, it gets classified as best it can. Then, as they learn more, it gets reclassified with new information about its evolutionary relationships.

With sharks, we know so little and we’re learning more every day.

Frilled sharks currently cover two species within the Chlamydoselachus genus, in the family of Chalmydocelachidae; inside the order of Hexanchiformes. Both species look so alike that it was only after inspecting their internal differences that they were differentiated.

Hexanchiformes means “six gills”, and sharks in this order have six (or sometimes seven) gills, as opposed to the usual five in other species. This group contains the most primitive sharks in the world, like the relatively well-known Greenland shark, the longest-living vertebrate known. 1 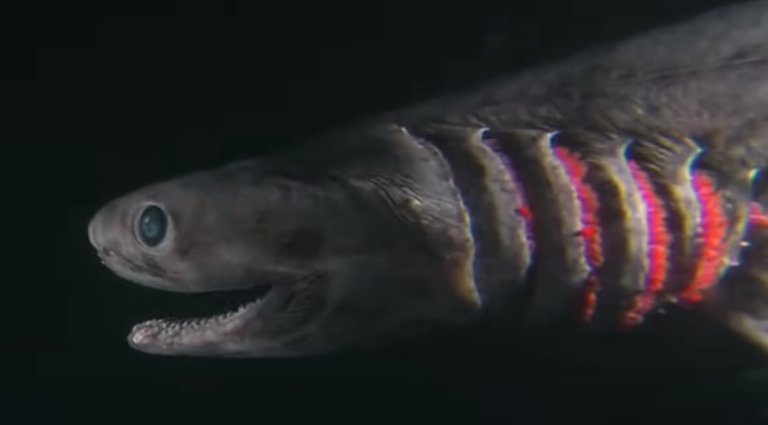 Frilled sharks certainly fit this description, but according to some sources they’ve already been reclassified as Clamydoselachiformes due to the fact that they seemingly pre-date the Hexanchiformes! This puts them into their own discrete order and implies they’re even more primitive than their closest relatives, the Hexanchiformes.

2. Frilled sharks come together only to mate

For many fish, fertilisation is external. Everyone shoots everything up into the water column and hopes for the best.

With sharks, however, quite a few fertilise internally (though this is rarely, if ever witnessed). This requires some level of coordination in a frictionless environment, and in frilled sharks it means the male putting those rows of teeth to use, holding onto the female for leverage.

This, as far as we know, is the only time frilled sharks come together.

Parents do not seem to care for their pups after reproducing, which are birthed live. This means, like most other sharks, they live solitary lives. 2

3. Frilled sharks may be one of the fabled ‘sea serpents’

For as long as humans have been at sea, there have been stories of enormous and terrifying monsters. Krakens, leviathans and sea serpents were some of the tall tales and legends that would be shared in taverns back on land. Now that we know more about the inhabitants of the ocean, some people think they’ve identified the real-life source of some of these legends.

Frilled sharks are long and eel-like sharks, who spend most of their time in the deep, but some scientists have postulated that on occasion, if they were to come to the surface, they may be responsible for some of the legends of sea serpents. They certainly look a lot like writing sea snakes.

Larger species of the frilled shark have been found in fossils, so there is also a chance that ancient mariners came in contact with one of the now-extinct members of the family, an even more terrifying specimen! 3

By studying the development of embryos inside frilled sharks, scientists can get an idea of how they’ve evolved to adapt to their unusual environment and piece together other clues about the prehistoric conditions their ancestors thrived in.

Understanding development (in the womb) is essential for understanding the evolution of generations, and having such primitive species to study is an exciting opportunity for scientists researching ‘evo-devo’, or evolutionary developmental biology.

The first comparison of embryos of frilled sharks discovered remarkable changes in embryo formation over an exceptionally-long gestation period, demonstrating an initially high level of variability that reduced rapidly towards the moment of birth.

Though there isn’t a conclusion to make from this yet, it opens the door for a lot more research into the topic. Since these sharks may represent a primordial body type, these branches of research are important in comparing how their ancestors diverged and became modern sharks. 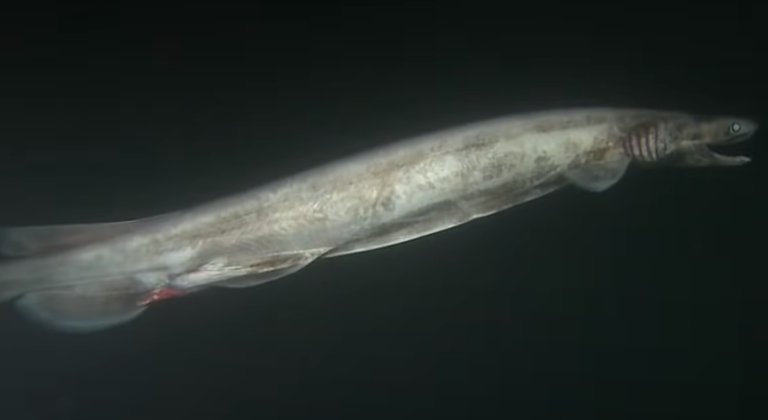 5. They may be predated upon by other sharks

Frilled sharks have been found with the tips of their tails missing, leading people to speculate that they might be victims of predation from other sharks.

So far, however, predation on frilled sharks remains unknown. 4

The frilled shark’s mouth is specially evolved to catch and hold onto soft-bodied prey like squid.

The mouth is filled with rows of triple-pointed teeth, thought to be a similar design to the extinct Devonian phobodont sharks from over 350 million years ago.

They have below average bite strength, but their trident-shaped teeth point vertically and inward with dozens of points enabling them to hold prey like velcro!

Again, these sharks give us clues about what animals were like in prehistoric times.

7. The frilled shark’s long gestation period puts them at risk

In 2004, an overfishing assessment in the frilled shark’s natural habitat caused it to be listed as ‘near threatened’ by the ICUN. In 2015, it was reclassified as ‘least concern’. However, the ICUN lists its population trend status as unknown, with no records of individuals or much data on the species at all.

What we do know is that populations seem to be relatively isolated from one another, opening up the possibility of speciation, but also implying there could be undiscovered species that are at risk of extinction.

It is known that frilled sharks are caught as by-catch from trawler nets, and with a long gestation period, this suggests the trend of the population, at least in heavy fishing zones, would be reduced – though there is no data on this yet. In 2003, a suspected mating event was disrupted by trawlers in the Atlantic, who caught 34 individuals, presumably aggregating to mate.

Frilled sharks have possibly the longest gestation period of any vertebrate known, so it would be unsurprising if these interferences from the fishing industry are reducing populations over the long term. 5

A Japanese fisherman spotted a strange eel-like creature and alerted the Awashima Marine Park in Shizuoka who captured the animal. The video of the amazing frilled shark is extremely rare.

9. It has a super freaky distant shark relative

While from a different order of shark, if you like weird then it is a relative of the goblin shark, whose jaw can come out of its mouth when it hunts for prey!