Sloth is one of the seven capital sins from the Catholic faith. It’s essentially a manifestation of laziness and a hesitance to further God’s plan.

The word comes from the Middle English for “without care” and is thought to amount in a loss of interest in life.

It’s also a tropical, tree-dwelling mammal that is known for being super lazy! 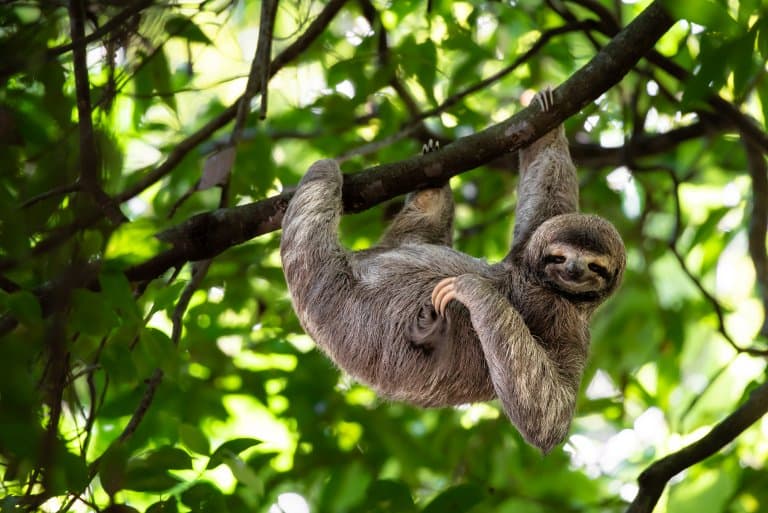 In the jungles of Central and South America hangs a creature who really has figured out life. The sloth spends most of its time in a dream-like state, in some of the most beautiful habitats on earth, literally hanging around.

Its metabolism is so slow that it hardly ever has to eat or defecate, and it has a host of commensal organisms that live with it, in its fur to keep it company. It also has a number of other interesting adaptations to its unique lifestyle that set it apart from other animals in the area.

There are six species of sloth in total from two families classified by the number of claws they have, and there are many more that are already extinct

When a sloth does need to eat, all species will diet on the leaves of the cecropia, which are dioecious trees. Two-toed sloths (more on this distinction later) are omnivorous and will eat insects, fruit and even small lizards as well.

The conservation status of the six species alive ranges from least concern, to vulnerable and one species is currently critically endangered.

1. They come in two-toed and three-toed varieties

The six species of sloth are separated into two groups, defined by the number of claws they have. This is misleading in some cases, as both groups have three claws on their feet.

The differentiation comes from the number of claws on their forelimbs, and I think you can figure out which is which.

One interesting difference is in their parental care. Two-toed sloths guard their young very vigilantly, while the three-toed variety has learned to ignore their children’s cries almost entirely. 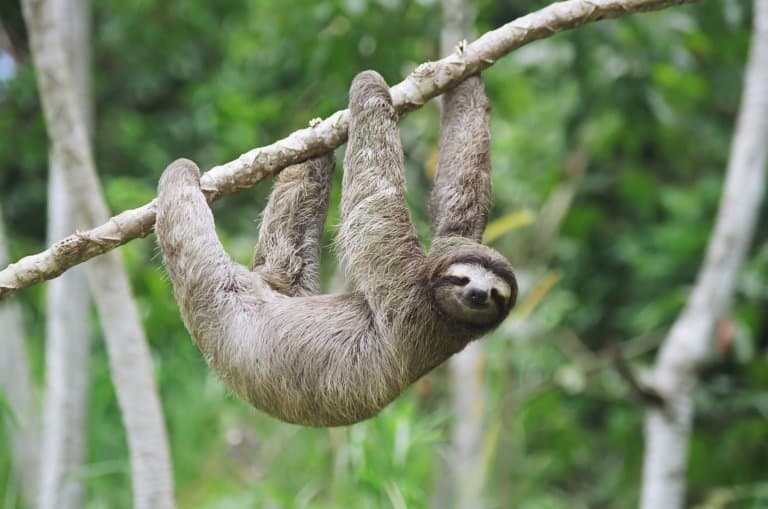 2. They spend 90% of their time motionless

While hanging upside-down for so long, you’d think they’d find something to do, but sloths are quite content just sleeping or chilling on a branch for almost the entire day.

They occasionally move for food, to find a mate, and they will climb all the way down a tree to defecate, but for almost all their lives, they’re happy just to be.

3. Sloth are 3 times stronger than humans

From the moment they are born they are able to lift their entire weight with a single arm and are three times stronger than the average human due to specialized muscle arrangements in their arms, which allows them to hang upside in trees all day. 1 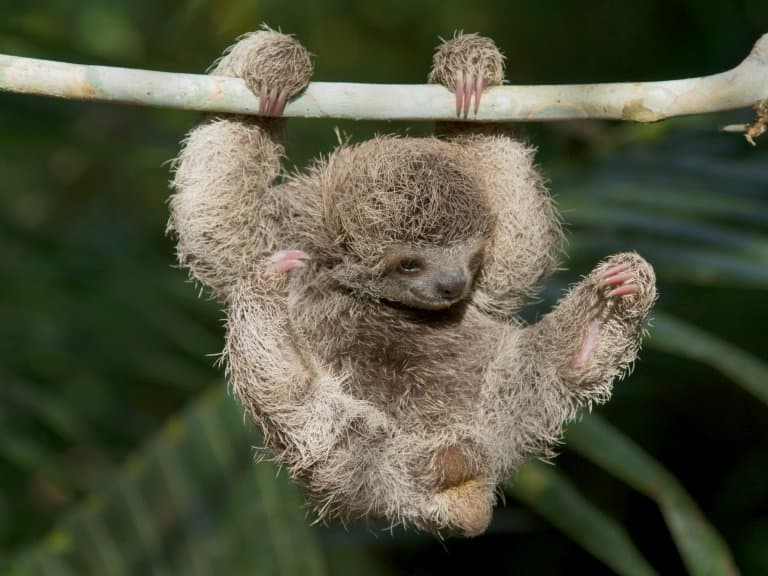 While a sloth is almost useless on the ground, and only really dares to spend time there when it needs to poo, they’re quite adept at swimming. Their low muscle mass means they don’t readily sink, and can actually travel significantly faster in the water than on land.

This allows them to travel between islands, and by reducing their metabolism they’re even able to hold their breath for 40 minutes!

5. They have a once a week only poo routine

They have a rather bizaree toilet routine, where they climb down from their tree, dig a whole in the ground and then poo in it – once a week only. They will return to the same hole every week to defecate. They can lose a third of their body weight letting it all out in one big go!

Being on the ground leaves the sloth vulnerable to predators, so they will (slowly) climb back into the tree afterwards. 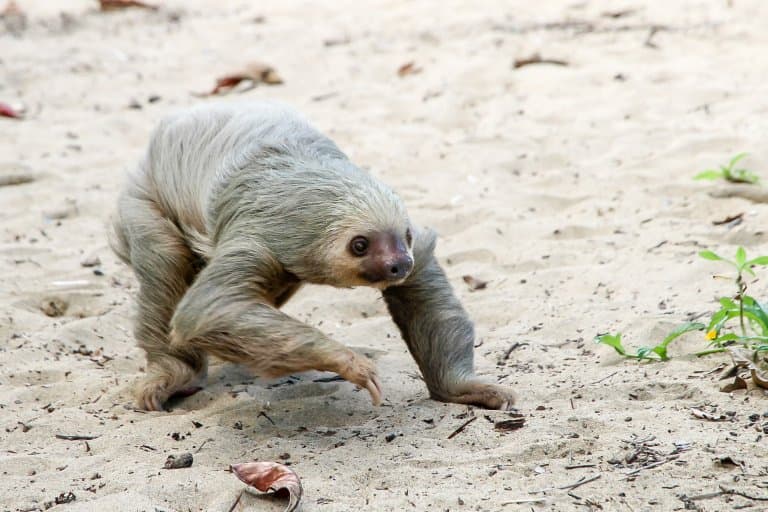 The closest relative to modern sloths is the anteater, a sort of insectivorous, terrestrial version of a sloth with equally formidable claws.

Anteaters are surprisingly adept climbers, too, so the two suborders can occasionally bump into one another.

The hair of a sloth is coated in a thick, green algae that aids in its camouflage.

This algae not only provides nutrients for the sloth, but for a host of other organisms that live in its fur. These include beetles, ticks, mites and even moths, which we’ll come back to shortly. 2 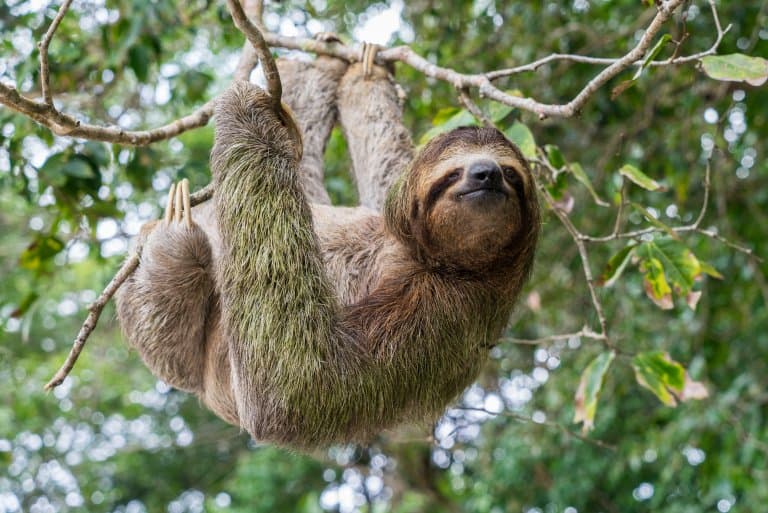 The algae that coat some sloths provides nutrients for five types of moth that can live only on the fur of sloths.

These moths need the dung of the sloth in order to reproduce since they have come to lay their eggs in it. This makes them a form of coprophagous, or “poop-eating” moths.

9. They have very low body temperatures

Human body temperature averages at around 37°C, or 98.6°F, give or take about half a degree. Much more or less than that and you’re in some serious trouble. Not if you’re a sloth!

Their body temperature can range from 20 to 36°C (68 to 95 °F). This range allows them to both slow down and speeds up their activities as necessary, and contributes to their ability to travel between islands.

10. They’re both long and short-necked

Two-toed sloths can have as few as five cervical (neck) vertebrae.

This is two less than most mammals, who almost all have seven. The three-toed sloth, not to be outdone, has up to ten! To put this into perspective, this is more neck vertebrae than a giraffe has.

This allows them to turn their heads through 270°.

This results in colourblindness and low acuity vision in dim-light and blindness in bright-light conditions.

Armadillos and anteaters are thought to suffer with the same eye condition.

Rather than being either cold or warm-blooded, sloths can choose, based on their surroundings.

As such, they can bask in the sun to warm up, or generate heat from their food, where necessary.

13. Even their hair is upside-down

Most mammals have hair follicles that point downwards, to help keep water channelling towards the ground.

A sloth is no different, except they spend so much of their time upside-down, that their hair follicles point in the opposite direction to other mammals. 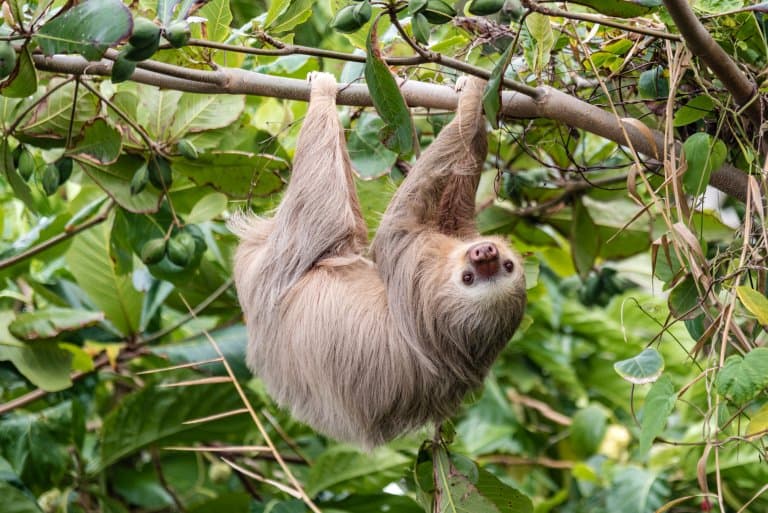 14. They have an ancient, enormous cousin

Around 10,000 years ago the world lost a five-ton, six-meter giant cousin of the modern sloths.

These formidable beasts can be seen as skeletons in museums and were thought to roam the Americas in various forms and were predominantly herbivores, but hair analysis has shown scientists that these enormous creatures would also eat meat in some cases. 3

15. They don’t grab their own arms and fall to their deaths

An unpublished essay by Douglas Adams jokingly began this rumour, and it’s been spreading as fact. The Sloth Conservation Foundation states: “This rumour might be one of the most frequent questions we get asked here at SloCo! Sloths do NOT grab their own arms and fall to their deaths”.

Sloths might be slow, quite simple-minded and very dopey-looking, but they’re not that stupid. 4

Sloths are designed to withstand falling out of trees, and typically can fall from a tree once a week.

This can occur when two sloths fight over a female to mate where they attempt to push each other from the tree – or just when a branch snaps! Fortunately, they are generally fine.

The Pygmy three-toed sloth is classified as critically endangered by the ICUN, with a total population of just 79 in 2012.

This is largely down to the size of their habitat in the red mangroves of Isla Escudo de Veraguas where they live exclusively – which is only a couple of miles wide. Their main threats are human settlement expansion in this small island area.

The Maned sloth is considered vulnerable, and its main threats are habitat destruction due to deforestation and hunting in eastern Brazil.

The good news is, the remaining 4 species of sloth are all considered ‘least concern’. 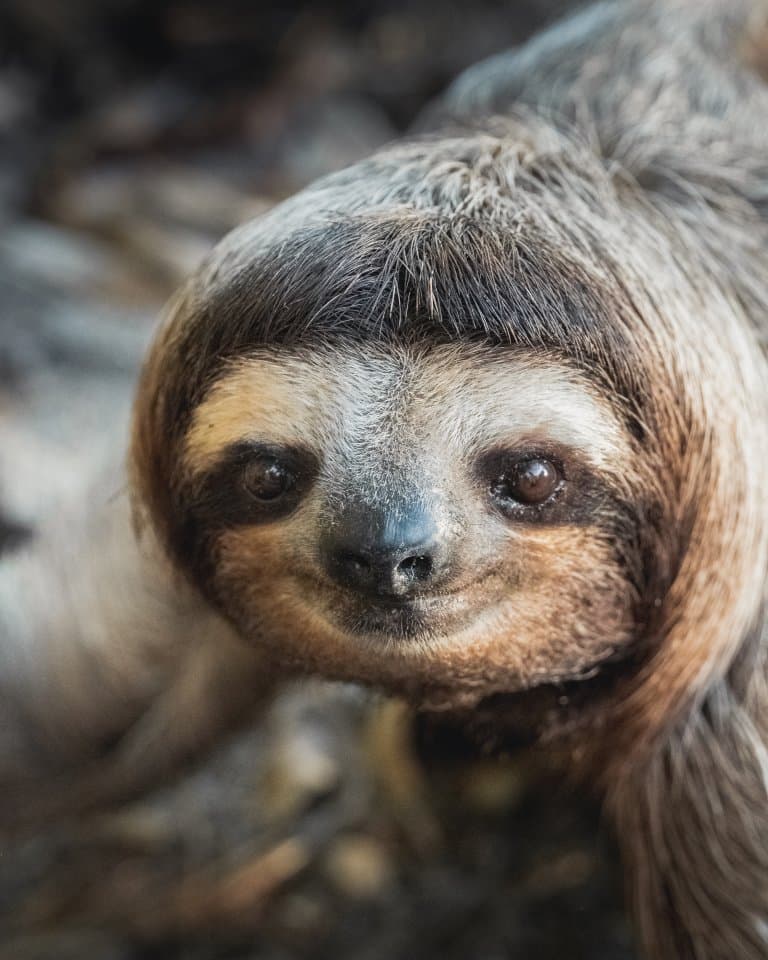