Few animals are as iconic as the giraffe. After all, with their unmistakable spots and supersized necks, they certainly stand out in a crowd.

Found in the sub-Saharan African savannas, giraffes are herbivores that mostly eat leaves and shoots thanks to their height and long necks. 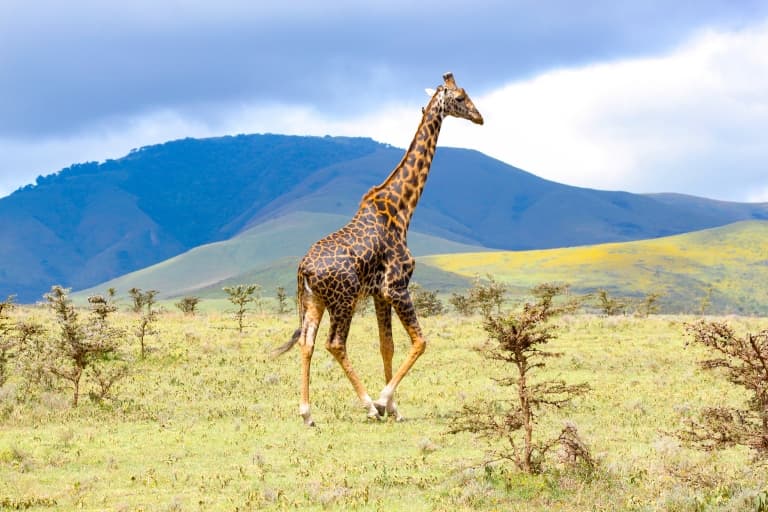 While they tend to be diurnal animals, which means they’re most active in the early morning or late afternoon, you may also find them wandering about at night.

Giraffes live in family herds of women and their offspring, or herds of unrelated males. They can form in much larger groups as well. Female giraffes bear sole responsibiltiy of raising their young.

For sometime giraffes were thought to have a single species which is still recognised by the ICUN today (with 9 sub speciies). This number grew to a proposal of 4 and then 6 different species. With new findings in a 2020 study, researchers now divide giraffes into 8 species.

These species exist in a range of conservation statuses, with some still being found abundantly in their natural habitats and others on the brink of extinction.

1. Giraffes are the tallest mammals on the planet

Not only are giraffes the tallest mammal on the planet – they’re the tallest animal! It comes as no surprise either when you consider the fact giraffes can grow to be 5.5 meters tall.

Not sure just how tall that is? It’s around half the height of a telephone pole!

Various theories for a giraffes long neck include evolution to enable it to reach food high in trees that other animals couldn’t. Another theory is proposes males who take part in ‘necking’ contests obtain access to females, and therefore larger necks are envitable over time. 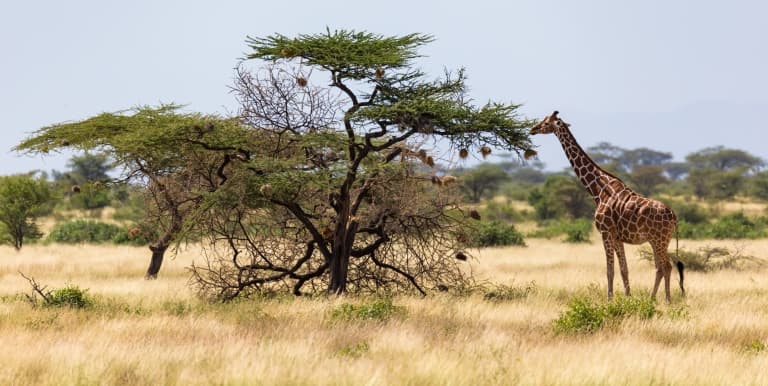 3. Males use their necks in combat called ‘necking’

Males establish social hierarchies through ‘necking’, where they fight each other using their long necks to establish dominance and mating rights over females.

4. They can’t bend down to drink water

What do you get when you pair the tallest animal in the world with a neck too short to reach the ground? An animal that can’t bend down to drink water!

Now, this isn’t to say that giraffes can’t drink at all! Instead of bending their neck down, giraffes will splay out their front legs in order to bring themselves closer to the ground, which can allow them to easily drink without bending over. If giraffes didn’t do this, they could pass out – or worse! – due to the blood rushing to their head. 1

Thankfully, since most of the water a giraffe needs can be found in the plants they eat, they only need to perform this gymnastic act every couple of days. 5. A giraffes tongue can measure 20 inches in length

This allows it to wrap around branches and pull leaves from trees to eat.

6. They give birth standing up

Drinking isn’t the only thing that giraffes have to do standing up – they also give birth standing! While this may not seem like the most impressive fact, it is when you consider that the baby giraffe then has to fall up to two meters! That’s a drop higher than the height of most people.

If that isn’t testament enough to the resilience of giraffes, though, a fall like this doesn’t keep them down. Most baby giraffes are standing within a few minutes of birth! 2

7. Giraffes can kill some of Africa’s top predators

While giraffes may have several predators, they can easily turn the tables and kill some of Africa’s top predators, including lions. This is thanks to their powerful kicks, which can easily protect them from small groups of predators.

Giraffes may not have fingerprints like humans, primates, and koalas – however, their spots make them unique! Each giraffe has a unique pattern of spots that you won’t find anywhere else, which helps in telling them apart. 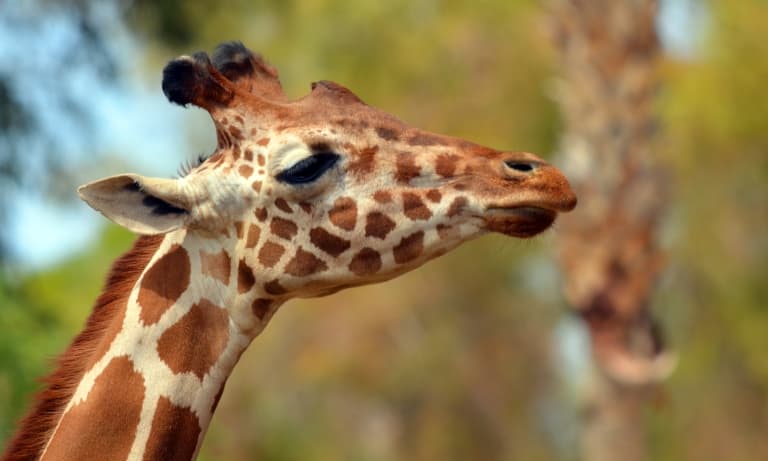 9. Giraffes make a variety of sounds

For a long time, many scientists and specialists believed that giraffes didn’t make any sounds. However, it’s recently been discovered that giraffes are quite vocal, although most sounds can’t be heard by the human ear.

Some of the sounds we can hear, though, include whistles, grunts, and even hissing. Talk about talkative!

10. They need less than an hour of sleep in a 24-hour period

In captivity, giraffes may snooze away up to 5 hours each day. However, out in the wild, this number drops significantly – down to only 40 minutes a day!

As if that isn’t fascinating (or mind-blowing) enough, though, this isn’t a consecutive 40 minutes. Instead, it’s more likely to catch giraffes taking the ultimate power naps multiple times a day. These naps can be as short as only three to five minutes!

This is the shortest required sleep time of almost all animals.

You may have heard the word ruminant before, most likely in relation to cattle. A ruminant animal is an animal that has more than one stomach. This only applies to herbivores, who need a specialized second stomach or chamber to help break down and ferment leaves, grass, and other forms of vegetation in order to more easily process it in their regular stomach.

Paired with the fact that female giraffes are called cows and males bulls, giraffes are more similar to cattle than you might think at a glance! Plus, baby giraffes are even called calves.

There are some myths that giraffes have 2 or 3 hearts, which is not true.

However, not only do giraffes have a long neck, but they also have a longer heart! In fact, their hearts can measure up to 0.6 meters (2 feet) long. For comparison, the human heart is only 0.1 meters long, making the giraffe’s heart as much as 6 times larger!

13. Giraffe have ‘horns’ on their head, called ‘ossicones’

They are boney projections of the skill covered with furred skin. They can be used in ‘necking’ combat and when scaring away predators.

14. Sadly some specicies are critically endangered

The Kordofan and The Nubian giraffe species are both thought to have under 2,000 living in the wild today.