Caimans (Caimaninae) is one of the two members belonging to the Alligatoridae family. It shares this family with alligators.

Frequently found in Mexico and parts of South America, caimans navigate through marshes, swamps, rivers, and lakes. Their tough skin and powerful jaws protect them from the majority of other animals that share these habitats. 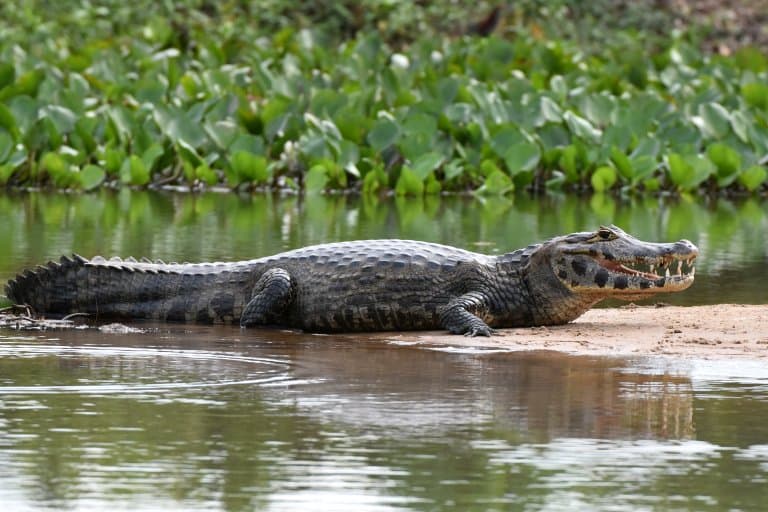 There are few methods to distinguish caimans from their closest relatives, the alligators. To start, caimans do not have a bony septum between their nostrils. In addition, their teeth are longer and sharper than an alligator.

In comparison to crocodiles, caimans are smaller, and have a U-shaped snout, rather than a V-shape. Crocodiles can also be found all over the world, while caimans are only found in Central and South America.

Their are 6 species of caiman alive today, and around 7 species that are known to be extinct.

They are relatively small in size on average at around 6-8 feet in length. The smallest caiman species – the Cuviers dwarf caiman, measures from around 4 feet, while the largest is significantly bigger – the black caiman, which can reach over 16 feet.

If encountered in the wild, it is best to retreat and leave them be. While caimans are relatively docile animals, they can be territorial and aggressive when threatened.

Caimans are apex predators, like alligators and crocodiles, and will diet on fish, reptiles, small mammals and birds.

Their conservation status is classified as least concern by the IUCN, although historically they were considered endangered and near to extinction.

1. Most live in freshwater habitats

Like alligators, caimans prefer to inhabit freshwater environments. Some species can survive in salt water like crocodiles do. 1 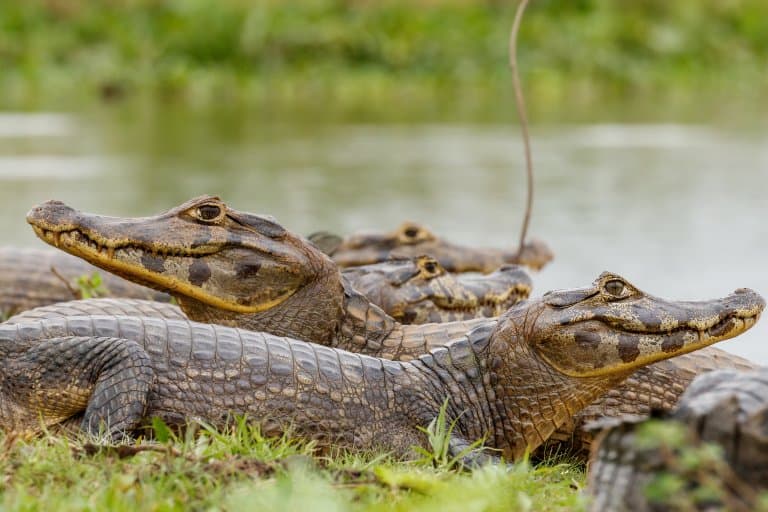 2. They are both bigger and smaller than alligators

Five of the six caiman species are, in general, smaller than alligators.

The sixth species—the black caiman—can reach over 13 feet in length and weigh up to 2,200 pounds, making it larger than almost all types of alligators.

3. They have a strong sense of small

The olfactory bulb—the portion of the brain responsible for smell—is quite prominent in the brains of caiman. Using this keen sense of smell, caimans can easily search and hunt for prey.

4. They are ambush predators

Caimans will wait patiently for prey, staying practically motionless just beneath the water’s surface. Once prey come within striking distance, they will lunge and latch onto their next meal. 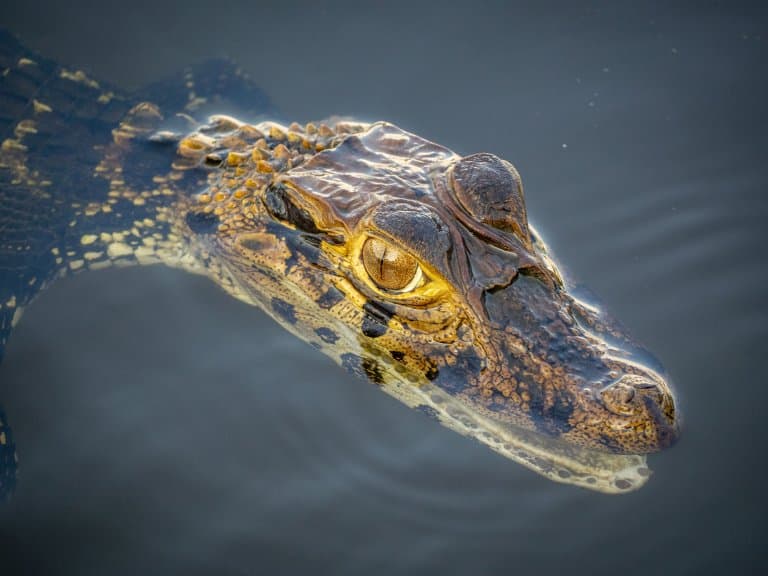 5. They are largely nocturnal

Caimans will spend most of the daytime lying in the sun or cooling off in the waters.

At night, they will become more active and hunt. Under the cover of darkness, the black skin of caimans make them almost undetectable.

6. They will eat almost anything

As apex predators, caimans will eat almost anything that they can fit into their mouths.

Thus, they have to swallow their prey whole. If their catch is too large to swallow, caiman may wait for their prey to decay before consuming it. 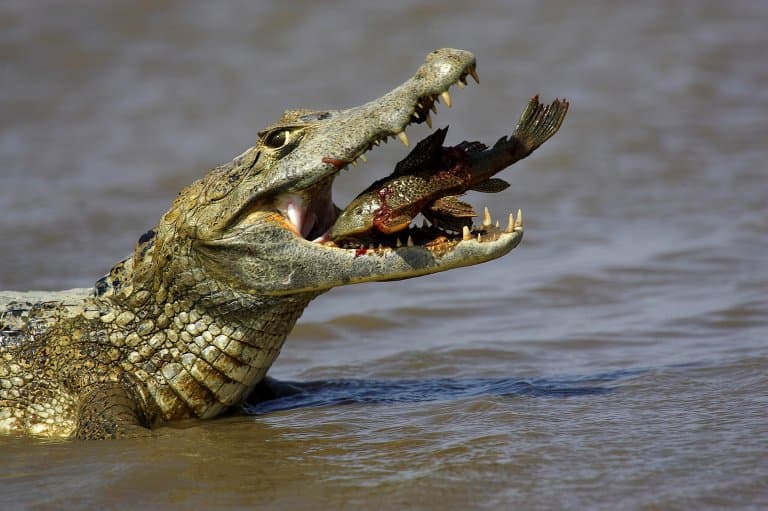 Over time, caiman teeth can become worn down and old.

When this occurs, they will shed these teeth and grow new ones. Caiman can reproduce thousands of teeth within their lifetime.

9. Caiman’s have an exceptional auditory senses

While their ears may be hard to find, caimans actually have excellent hearing abilities.

Their ears, which are located just behind their eyes, are capable of detecting sounds that we humans cannot. 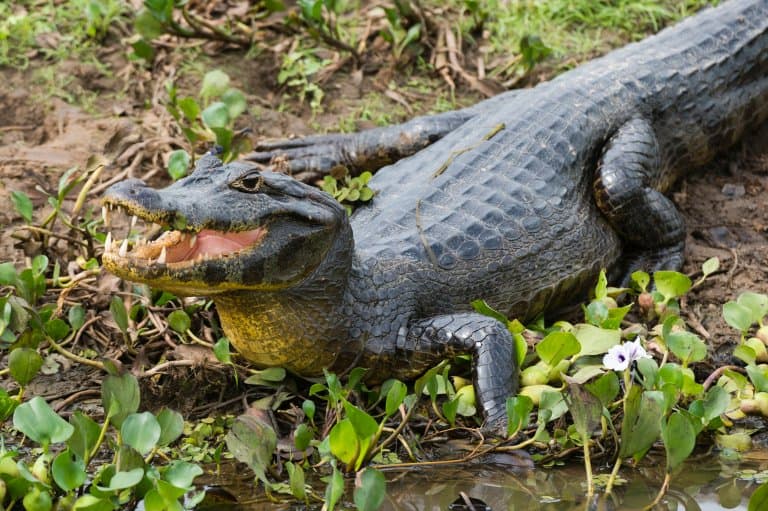 After mating, female caimans will build large nests into which she will lay 10 to 70 hard-shelled eggs.

After approximately six weeks, the eggs will hatch and mothers will teach their young to swim and hunt. 2

To get the attention of potential mates, male caiman will produce low-frequency bellows (infrasound) that cause the surrounding waters to vibrate. These bellows are indetectable to the human ear. 3

12. Juveniles take a while to venture out on their own

After hatching, hatchlings will stay with their mothers for close to two years. During this time, they are extremely vulnerable to predators because of their small size.

13. They can go into aestivation during summer months or droughts

Aestivation is a form of hibernation where the caiman goes into a dormant and inactive state, lowering it’s metabolism to help survive the tougher climate.

14. A prehistoric ancestor had an extraordinary bite force

Researchers have found evidence of a prehistoric caiman that lived approximately eight million years ago.

It is believed it had a bite force that was twice as powerful as that of a t-rex and 20 times the strength of a present-day white shark’s. 4

15. They were once endangered and almost faced extinction

While the IUCN presently classifies caimans as a species of “least concern”, this was not always the case. Caimans used to be hunted much more frequently for their scales and skin to be used in fashion, which lead to a marked reduction in populations.

Some reports suggest almost 99% of caimans were eliminated. Due to conservation efforts, their numbers were replenished and brought back up to the stable level that they are at today.