The Galapagos Islands are home to some of the strangest and most unique creatures on earth. For what appears to simply be an unassuming little bird, there’s a lot of competition to stand out.

This ground finch makes sure to fit in amongst this archipelago of misfits by drinking the blood of other birds, and is therefore known as the vampire ground finch. 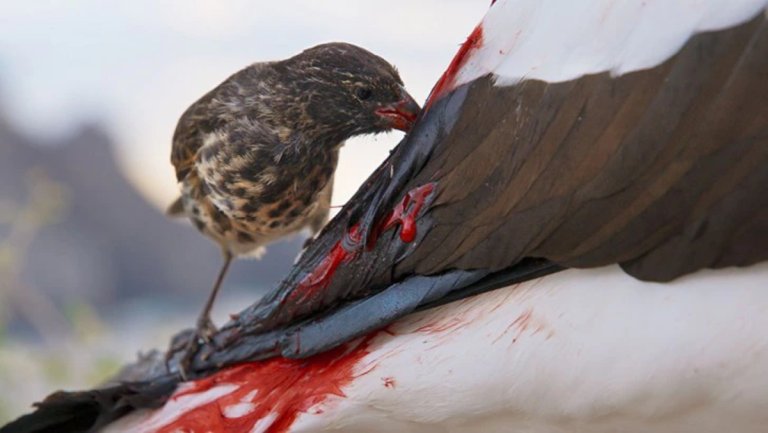 The vampire ground finch can be found on the Galapagos islands, which are located around 1,000km (600 miles) off the coast of Ecuador.

The vampire ground finch looks a lot like any other finch. You may mistake the red stain on its lips for berry juice, but this one really does have a hankering for bird blood.

It used to be considered a subspecies of the sharp-beaked ground finch, however strong genetic evidence suggests they are not closely related and they are considered their own species.

These are a vulnerable species, endemic to only two islands in the Galapagos, and they’re at risk of extinction from a new parasite.

However, they do appear to be adapting quickly and living up to their names as one of the 13 species of Darwin’s Finches found in the archipelago.

Here are some cool things about Vampire finches.

Let’s get this one out of the way, shall we? The vampire ground finch is peculiar in its choice of diet; part of which comes from the body of red, masked and blue-footed boobies. These tiny finches have been seen pecking at the skin of the boobie and ‘milking’ them for their blood.

This is where the name originates and is a behaviour that – so far – hasn’t been seen in any other bird species. They seem to do it during times of drought, and for some reason, the boobies don’t seem to mind.

It’s possible that this behaviour originated from a form of commensalism in which the ancestor of the vampire finch would pick off parasites from the boobie, and gradually evolved into cutting out the middle-man entirely. The finches then capitalised on an alternative food source!

While this is a mild irritance for adult blue-footed boobies, it’s potentially deadly for young chicks.

While not exclusive to this bird, this is is quite unusual for a finch.

This little vampire rolls eggs out of the nest by stapping their beak into the ground and pushing with their legs.

These finches are found on two islands in the Galapagos: Darwin and Wolf. Their habitat is greatly restricted and they’re unable to take on long flights, so each population has to stay put. 1

4. Each population has a different song

Strangely, both populations have their own song.

Much like its namesake, the Wolf Island population has a long and melodious call. In contrast, the Darwin population have what’s been described as a buzzing call. 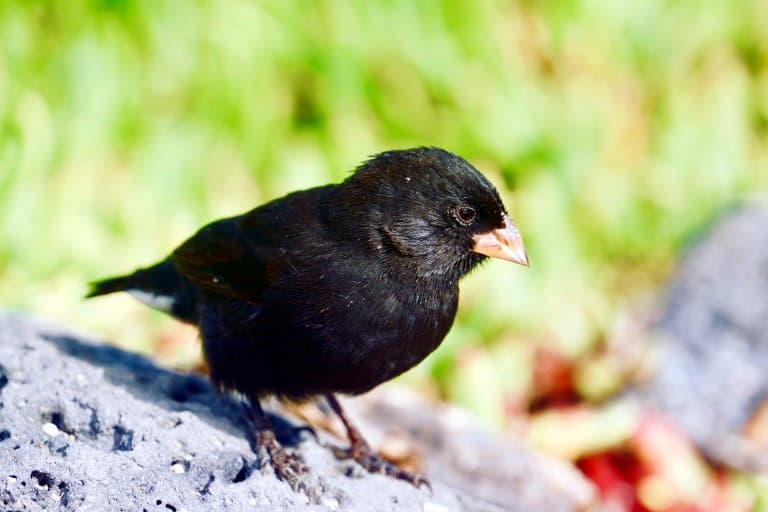 Among the invasive species that threaten the ground finches of the Galapagos, a particular parasitic fly that was thought to have been introduced in the ‘60s has proven to be one of the most destructive.

These flies infect baby finches, and in a cruel twist of irony, parasitise them, often killing them in the process. This botfly is called the ‘avian vampire fly’, and threatens to wipe out populations of finches all over the Galapagos.

6. They contributed to the theory of evolution

Some people think the word theory means a simple idea, but in science, it refers to a form of robust and well-examined consensus.

Much like the theory of gravity, the theory of evolution was developed as an idea and then modelled and studied thoroughly into what we consider about as certain as we can be on any topic.

Legendary naturalist, Charles Darwin, had one of his most groundbreaking discoveries of evidence for evolution on the Galapagos, and much of his studying revolved around these finches.

These finches have become known as ‘Darwin’s Finches’, of which there are 13 species – the bloodsuckers being one of them. Each species evolved a different bill size and shape, which allows them to exploit different diets and food. 2

Evolution isn’t a conscious adaptation to circumstances; it’s simply the product of useful random mutations, that happen to come in handy and then get passed on, or ‘selected for’.

The invasion of these vampire flies has been shown to affect the young of finches with lower levels of brood care instinct. That means females who naturally want to spend more time with their young are reproducing more successfully.

Over time, this trend may push out inattentive mothers and genetically reinforce those who show improved brood care as the genes that predispose the birds to this behaviour faced with these selective pressures, changing the genetic buildup of the finch population and hopefully cementing this adaptation to the invasive fly problem. 3

8. They have unusual guts

Every animal on earth has at least billions of microbes living in its digestive system that help break down what they eat into useful building blocks. Different bacteria allow for different types of food to be broken down. For example, a cow has bacteria that produce the enzyme cellulase, which breaks down the cell walls of plants, and is how they manage to extract the protein for all that muscle only from grasses and herbs.

As any dog owner will recognise, dogs don’t have these bacteria, which is why when they eat grass, it comes out undigested; all stringy and gross in their poo. So, the bacteria in our body determine what we can eat, and finches are no different.

It’s been found that almost all of Darwin’s finches have very similar ranges of these bacteria living inside them with one exception: the vampire finch.

This bird has microbiota that are much more common in predatory birds and reptiles and goes a long way to explaining how they’re able to digest such unusual food.

One of the many suggested resolutions to the vampire fly/finch struggle is to infuse a type of cotton with an insecticide. The cotton is then supplied to the finches as nesting material and can kill 100% of the parasitic flies in the nest.

You might be wondering why conservationists are favouring one vampire over another, but it’s important to remember that the flies are an invasive species, and these can wreak havoc on local populations that have never had time to adapt to equilibrium with them; especially on islands – just ask New Zealand! 4