Tigers are nocturnal carnivores known for being one of the most iconic, and largest, of the big cats.

They live in a diverse range of habitats across Asia, with most being found in India, but also in China, Russia, Thailand and Malaysia. 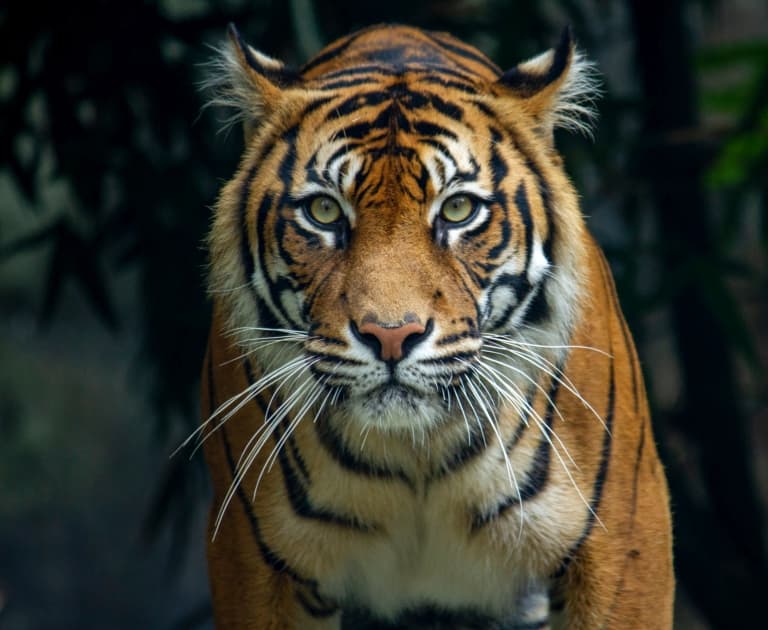 Tigers are recognisable by their orange fur, dark vertical stripes and white belly. They are ambush predators, which quietly stalk their prey at night before pouncing!

The communicate by scent marking and through vocalisations – they will growl, grunt, hiss and even miaow like a house cat. Researchers believe each vocalisation is used to communicate different things.

On average tigers give birth to 2-4 cubs. Tiger cubs stay with their mother for the first two years, and learn to hunt from 6-months.

While they have no natural predators, their cubs and sick tigers are vulnerable to other predators who may be able to take advantage of their weakness.

Historically, hundreds of thousands of tigers roamed across Asia. However, over the last 150 years, the tigers’ range has shrunk by nearly 95% and they are sadly now classed as endangered by the IUCN Red List.

1. Tigers are the largest big cat

Without having seen any in person, it can be easy to think that all the big cats are the same size. After all, they all appear the same on television, and you rarely see a documentary comparing their sizes.

However, you’ll be shocked to learn that the tiger is actually the largest of the big cats – and one of the largest land mammals in the world. The largest tiger ever recorded was almost 3.5 meters long and weighed nearly 453 kilograms. That’s the same weight as four refrigerators! 1 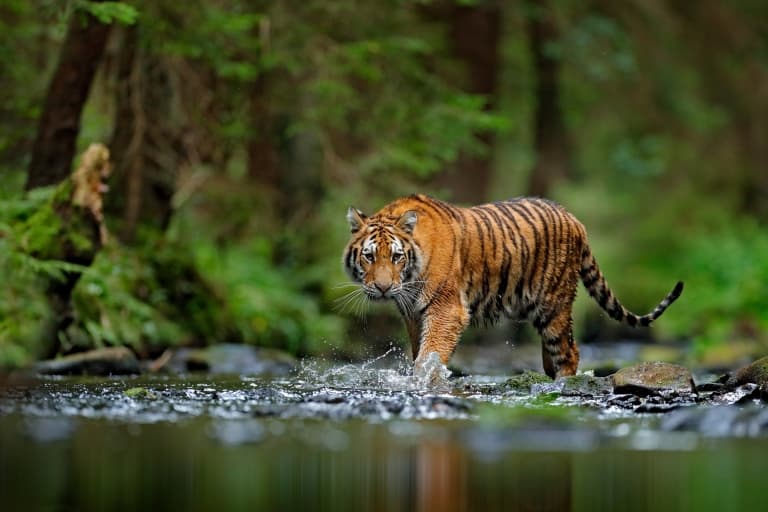 Historically, there are reports of some tigers reaching up to 4 m (13 ft) long, but none ever officially recorded.

2. Tigers were voted as the world’s favourite animal

In a 2004 online poll conducted by Animal Planet with more than 50k voters, the tiger was voted as the world’s favourite animal with 21% of the vote, with the dog coming second and dolphin in third place. 2

3. The Siberian tiger is the largest of the subspecies

Some Siberian tigers weigh over 300kg and are 3 metres in length (10-feet). However, some Royal Bengal tigers from the Indian state of Assam are as a large.

The smallest tiger subspecicies is the Sumatran tiger which weigh around 90-120kg.

4. They love to swim

While you may not get your cat to even stick their paw in their water bowl, the tiger absolutely loves to swim – and they’re good at it! In the wild and in captivity, you can expect to see the tiger spending at least a portion of their day swimming and cooling off in the river. 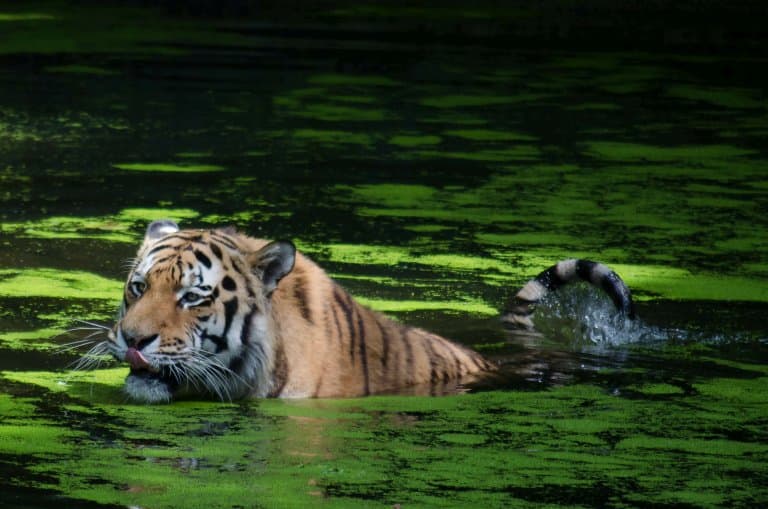 Like many other species, tigers are born with their eyes closed. This means that they spend the first week or two of live exploring their environment with only their other senses. One of the strongest senses a cub has in their smell, which they use to identify their siblings and mother.

6. Tiger cubs have just a 50% chance of survival

This is because they are so dependent on their mother.

They are susceptible to starvation when separated from their mother, aggression caused by other territorial males and human caused mortality. 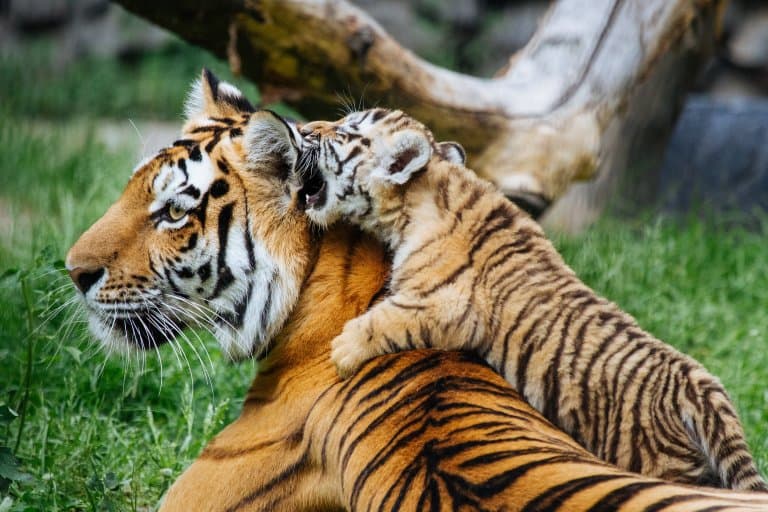 7. Stripes are the fingerprints of the tiger world

The best way to tell different tigers apart from one another? Their stripes!

Just like no two humans have the same fingerprint, no two tigers have the same stripes. Each pattern is completely unique to each big cat, helping create a way to tell them apart.

These strips will also appear on their skin!

8. There are three other colour variants of tiger!

While we usually think of orange fur with black stripes, but there are also white, golden and stripeless snow white. 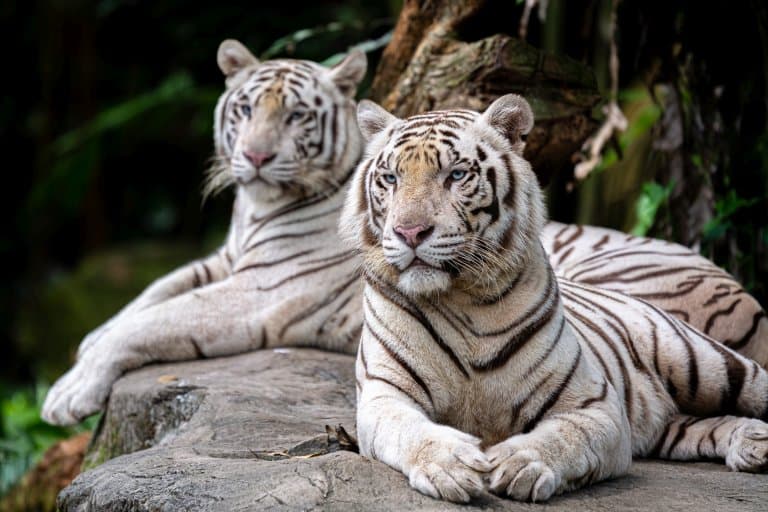 The scent is produced by a chemical compound in their urine called 2-AP. Weirdly, this is the same substance that gives fresh popcorn its yummy smell, according to the scientists.

One of the most shocking facts about tigers is that they’re known for sharing their hunts. If they land a particularly plentiful prey, tigers have been seen to share with other nearby tigers. They also allow for mothers and cubs to eat first.

This is unique not only to most big cats but most predators, who tend to be a bit stingy with their food.

11. Tigers can mate with other big cats

The tiger is known for being able to mate with other big cat species, especially the lion. In order for two different species to mate, they have to be closely related. For instance, a dog can mate with a wolf, but a rabbit cannot mate with a hare.

There are two tiger hybrids that result from mating with a lion: the Tigon or the Liger. The Tigon occurs when a male tiger mates with a female lion, and a Liger when vice versa.

You can find tiger hybrids in several countries, including the United States.

Crossbreeding always occurs in captivity, rather than in nature as Lions and tigers don’t overlap in the wild today, except in one location – India’s Gir Forest.

Despite their good manners in sharing their food, however, tigers are primarily solitary animals. While they may come together to eat or mate, you’ll most often find them alone.

However, don’t fret – they’re not lonely! Tigers like to make good use of their alone time, whether its swimming, relaxing, or interacting with their environment.

Many consider the tiger to be a solitary but social animals, like the mouse lemur and orangutan.

Have you ever watched your house cat by a window and seen them chirping to gather the attentions of birds (also known as your cat’s next meal if they had the chance)?

Tigers can also imitate the sounds of prey in order to draw attention and ambush them. One of the most notable sounds that the tiger can mimic is the call of the sambar deer.

14. They are silent stalkers

Tigers have soft toe pads which help them walk silently through their habitat while creeping up on prey. A tiger will typically walk 6-12 miles during a night’s hunting for food.

Only one out of ten hunts generally end in success for tigers. However, a large deer can provide a tiger with enough food for a whole week.

Tiger attacks on humans are rare, with most occurring in India, Nepal and Southeast Asia.

It’s estimted that between 40-50 people are killed by tigers each year, which is low if in comparison to elephants which kill around 350 people a year.

Often attacks are due to tigers being surprised by humans, or protecting their cubs. However, there have been a small number of cases were tigers have been more problematic and have consistently stalked and attacked humans in remote communities. 4

While tigers are naturally solitary, when in a group they are known as a ‘streak’ or an ‘ambush’ of tigers. Quite appropriate!

17. Tigers are one of the oldest species around

Tigers have been around for an estimated two million years. This is around the same time that the very first humans began to emerge in Africa.

While this is definitely an impressive time in history, it’s not the oldest species. Some species, like crocodiles, have been around for nearly three hundred millions years!

18. They are prominantly featured in myth, legend and culture

In Chinese myth, the tiger is one of the 12 animals of the Zodiac. While in Korean myth and culture, the tiger is considered a guardian that drives away evil spirits. 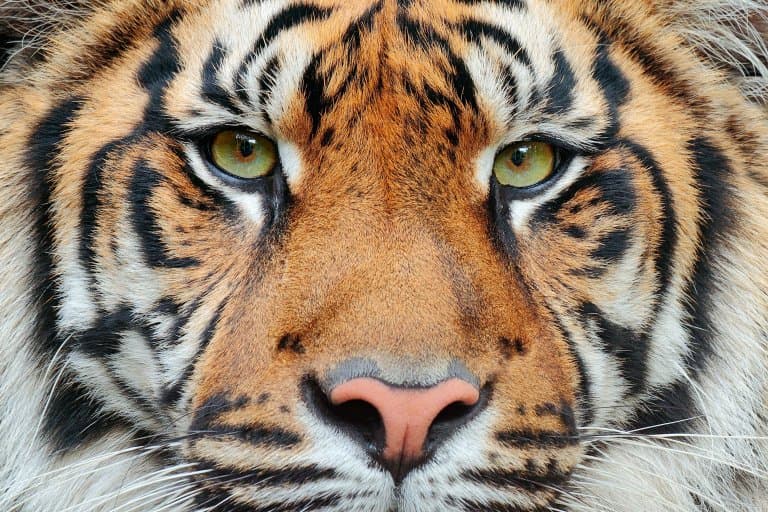 Tigers have also featured in many books and film, such as Tigger from Winnie-the-Pooh, Tony the Tiger from Frosties, and The Tiger That Came To Tea book.

19. There are more tigers in captivity than there are in the wild

Sadly, despite having spent two million years evolving and adapting alongside humans, the tiger is in danger. As of now, there are more tigers in captivity in the United States alone than there are in the wild in the entire world.

As of writing, there are less than 4,000 tigers left in the wild, with a majority of this number being found in India.

Some of the largest threats currently posed to the tiger are loss of habitat, poaching, and other human conflicts.

20. Tiger numbers rose for the first time in a century

Tiger numbers grew from 3,200 to 4,000 the WWF reported for the first time in 2016. This was largely driven by conservation successes in India, Russia and Nepal. 5

We’re positively surprised by the numbers, which validate what we thought has been happening thanks to conservation efforts,” says Ginette Hemley, senior vice president for conservation at WWF.