Snow Leopards are shy, elusive mammals that are known for their grayish spotted fur, long tail, and bright blue eyes.

These rare big cats are built for the cold. Typically found high in the mountains of Central Asia, they are considered one of the least understood felines. They spend much of their lives solidary in remote areas, roaming the vast, icy mountains they call home. 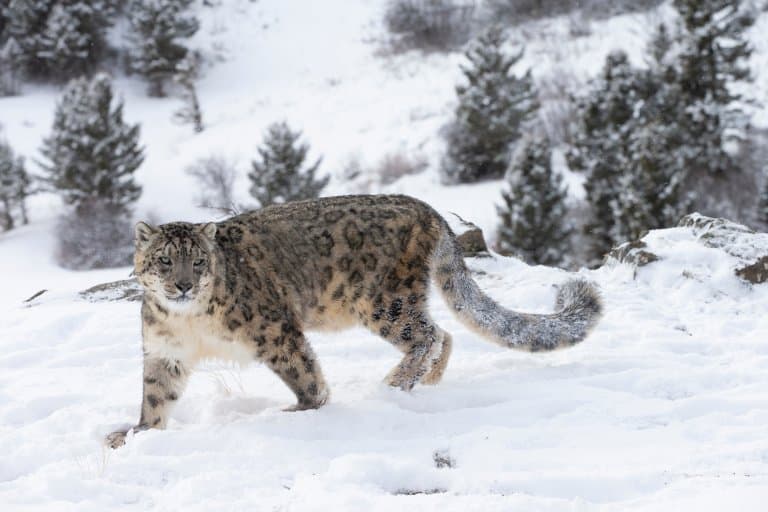 The snow leopard is the smallest among the big cats in its genus. They stand about 2 feet tall at the shoulder and don’t typically weigh more than 120 lbs. 1

With short front legs and longer hind legs, they have a stocky, muscular build that is perfect for traversing the mountainous terrain of Central Asia.

Their hunt for prey by silently stalking and attacking prey. Their diet consists of blue sheep, mountain ibex and tahr, markhor and wild goat.

Studies from DNA evidence in 2017 supported claims that three subspecies of snow leopard should be recognised; a subspecies from the Pamir Mountains, one from Mongolia and another in the Himalayas and Qinhai. However, this has been both contested and supported by other researchers.

With an estimated 7,000 left in the wild, snow leopards are vulnerable to extinction.

Experts are concerned about the impact climate change is having on their habitat, reducing their range and food sources. Increased ranching and herding have also led to the decline of wild prey, driving snow leopards to prey on cattle and ranchers hunting them in retaliation.

1. They are more related to tigers than leopards

According to genetic analysis done in 2010, tigers and snow leopards come from the same ancient relative and began evolving 3.2 million years ago. This makes them more closely related to each other than the other big cats within the genus. 2 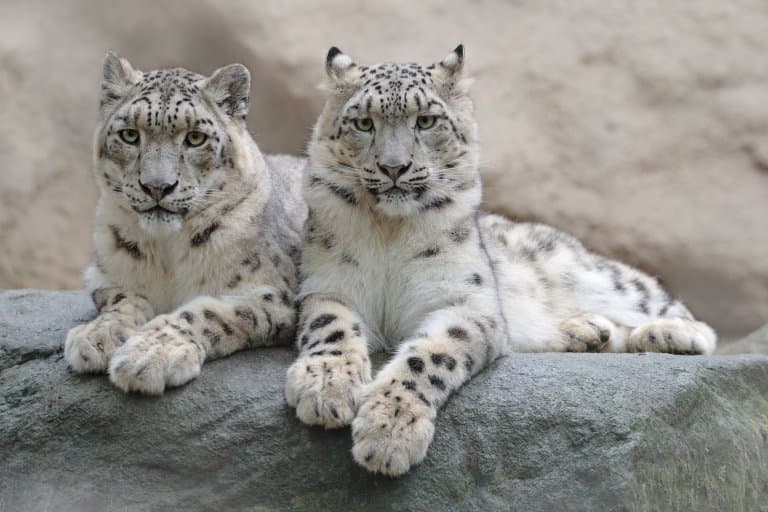 2. The genus changed due to genetic analysis

Snow leopards were once believed to belong to their own monotypic genus, Uncia. The word is derived from the old French word once, which was used to describe the Eurasian lynx. However, thanks to genetic analysis, they were found to belong to the Panthera genus.

Snow leopards are crepuscular, meaning that they are mainly active during the twilight hours. They can usually be spotted hunting and moving about in the early morning and evening. However, they have been known to switch to a more nocturnal lifestyle if they live closer to humans.

Snow leopards live at the highest altitudes of any cat. Typically found roaming the highest mountains of Central Asia, they have adapted to living at these elevations by developing wide nasal passages and large chest cavities that increase the volume of air inhaled.

They also have smaller red blood cells than other cat, and a lot more of them. This helps maximize the amount of oxygen absorbed by the body. 3

5. They have been hunted for their pelts and body parts

Historically, snow leopards have been hunted for their pelts and body parts for illegal trade and believed medicinal properties. Today, poaching is still a prevalent, however, decline habitat and climate change pose a larger threat to the snow leopard’s survival.

6. Called “the ghost of the mountain”

Because of their elusive behavior and where they live, snow leopards have been giving the nickname ghost of the mountains. The live primarily in arid, barren mountain areas, and are usually solitary.

7. They have a built-in scarf and thick fur

Snow leopards can endure temperatures as low as -40 °F (-40 °C). To help them keep warm, their body is covered in a layer of dense fur, with nearly 26,000 hairs per square inch. For a comparison, humans only have about 1,300 hair per square inch. The fur on their stomach can also grow to be around 5 inches thick.

A snow leopard will also wrap its tail around its body, like a scarf or blanket, to help it stay warm while it rests. It is one of the thickest and longest of all big cats, growing up to 90% as long as the snow leopard’s body. 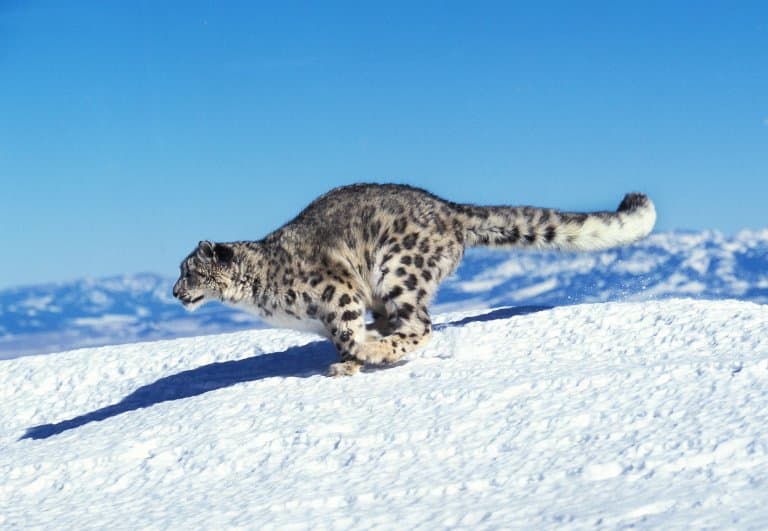 8. They have natural snowshoes

The mountains of Central Asia are arid deserts of snow and ice. To combat this, snow leopards have large, wide feet that are covered in fur. This helps to distribute their weight so that they can walk on top of snow instead on sinking into it.

The high mountain ranges of Central Asia are rugged and rocky, making it a difficult place for anything to survive. This also means that prey can be difficult to come by. Males have been known to travel as much as 25 miles in a single night looking for prey. For this reason, snow leopards require a vast amount of space to roam—sometimes up to 80 miles.

In order to communicate that the area is theirs, snow leopard will use their hind legs to scrape the ground or urinate on rocks to mark their territory.

10. They can jump 6 times the length of their body

Thanks to their strong legs, snow leopards can leap distances of up to 50 feet (15.2m). This is essential for hunting prey on steep mountainsides. Their broad, muscular chests act as shock absorbers, protecting them from the impact of such jumps. 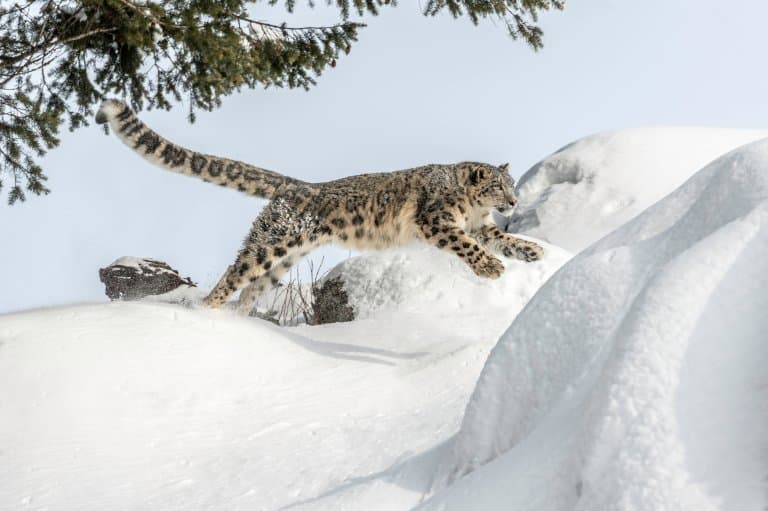 11. Their nose warms the air before it enters their lungs

Snow leopards’ noses aren’t only adapted to bring in more air, but to warm the air as it enters the body. With temperatures in the high mountains dropping well into the negatives, the wide, short nasal cavity warms air before it enters the lungs, helping to reduce heat loss in the body.

Among big cats, snow leopards are known to be quite gentle and shy. Even will feeding, they are more likely to run away if disturbed than try to stand their ground. In fact, there has never been a verified snow leopard attack on a human. 5

14. They are sometimes referred to as the ‘ounce’

The Latin word Uncia and English word ounce are from Old French word ‘once’, which was used for the Lynx (another mid-sized wild cat).

15. Conservation efforts are underway to help the snow leopard

12 countries in the Global Snow Leopard Forum agreed to ensure a viable future for their populations, while organisations such as the WWF are working with local communities to monitor snow leopards, reduce retaliatory killing and raising awareness programs. 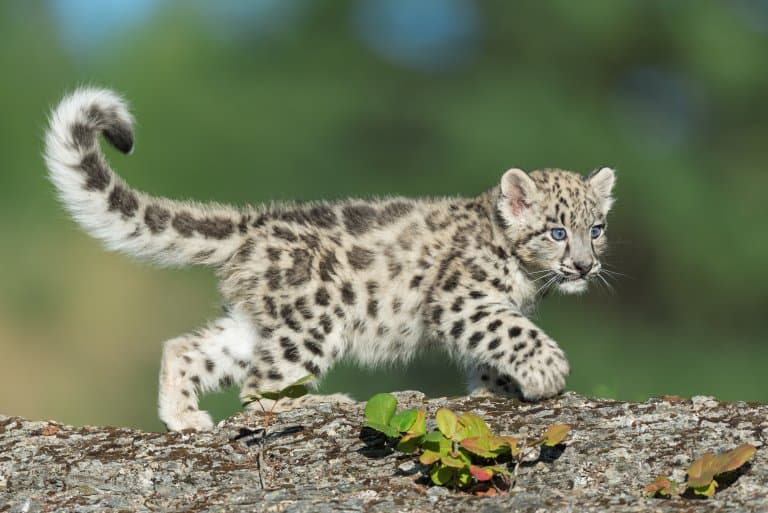