Cougars are a large cat, commonly known as the puma or mountain lion. Few animals can be found in as many places as the cougar, from the frigid plains of Canada to the dense forests of South America. They are the most widely found terrestrial mammal in the Western Hemisphere. 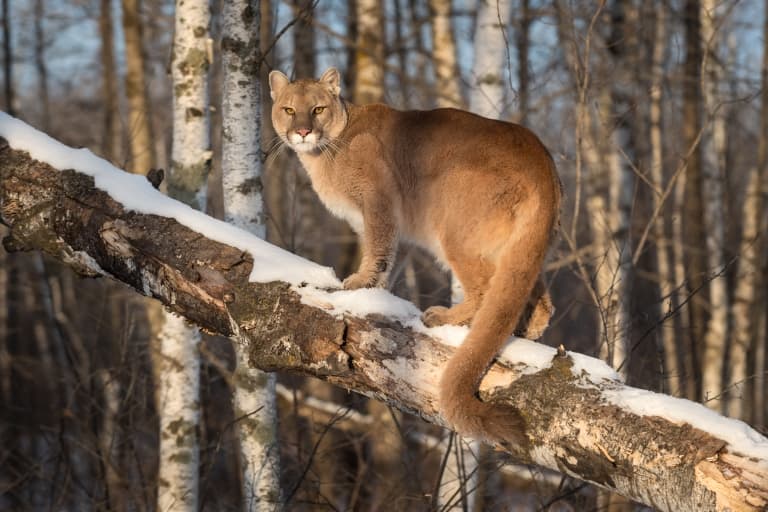 The cougar is the second-largest cat in the Western Hemisphere after the jaguar. They are solitary and silent animal, that is an ambush predator that largely hunt deer, but also rodents and even insects.

Cougars mostly avoid people and attacks on humans are rare, but have increased in North America over the years, as the population spreads and into cougar habitat.

As a species, cougars are of least concern when it comes to conservation, although some regional forms are endangered due to deforestation and urbanization which has lead to more and more run-ins with humans.

This has also reduced the amount of prey available for cougars in certain areas, which is why, even though the species itself is thriving, certain areas are at risk for losing their population of this stealthy hunter.

1. Cougars have more names than any other animal

And that’s just in English! Mountain lion, puma, cougar – there are around 40 different recognised names for this sneaky species, although the scientific name is Puma concolor.

Other names for the cougar include – 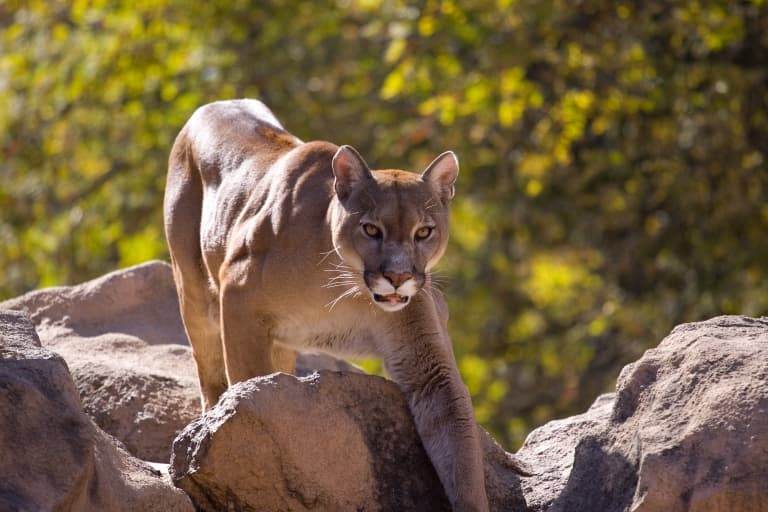 2. They can live almost anywhere in North/South America

One reason that cougars have so many names is that they’re found in nearly every ecosystem stretching from North America to South America. From rugged mountains to thriving forests, mountain lions can be found lurking in the shadows.

The reason that cougars can be found almost anywhere is that their diet revolves around deer, and anywhere you can find deer, you can usually expect to find one of these fierce felines. In recent years, there’s even been a spike in sightings in different areas as deer populations change. 1

Despite a long list of names referring to the sounds they make, such as mountain screamer, you’ll be surprised to learn that these “lions” don’t roar. However, that doesn’t mean they don’t make any sounds at all.

In fact, from screams to gentle purrs, cougars can communicate with a wide variety of sounds that true panther species, such as the African lion, can’t. However, like many other species of feline, they also communicate through body language, with different expressions and poses meaning different things – some so subtle only another cougar could pick up on them! 2

Due to their somewhat terrifying scream, cougars have been known to cause quite a fright for hikers and campers who may have misplaced this sound for human screams or even ghosts. 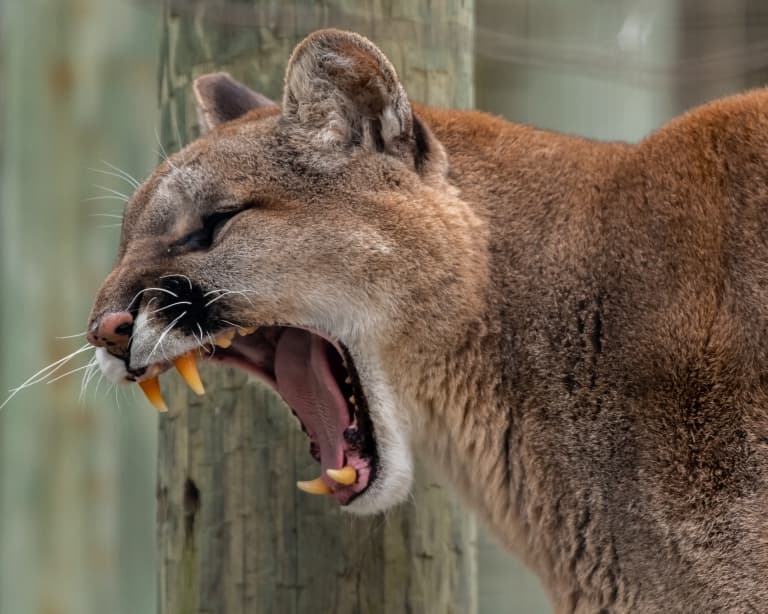 4. They can run faster than a moped

With a top speed right at 80 kph (50 mph), cougars can outrun even the fastest mopeds, which only reach around 64 kph (40 mph). At this speed, it comes as no surprise that cougars are able to chase down some of the fastest prey in the Americas.

This super speed is always why you should never try to run away from a mountain lion should you be unfortunate enough to come face to face with one in their territory. Instead, make sure to familiarize yourself with cougar safety, such as backing away slowly and maintaining eye contact.

5. Cougars don’t have claw marks in their prints

Round, nearly four inches in diameter, and…lacking claws? That’s right – despite their impressive size, cougars don’t leave any signs of claws in their prints unless they’re traveling in particularly tough terrains. This is because, like many feline species, they’re able to retract their claws.

This, along with the distinct “M” shape of their paw pad, makes their tracks easier to identify than many other animals!

Believe it or not, the cougar isn’t at the top of the food chain – although it’s pretty close!

While there’s no doubt that these fierce felines are top predators, due to their stealthy nature and lack of head-to-head prowess, they often get the short end of the stick when it comes to major apex predators like bears or even wolves.

7. Babies have spots and blue eyes

If you were to find a baby cougar while out hiking, you probably wouldn’t recognize it at first. In fact, you may liken it more to a leopard or cheetah than a mountain lion!

When cougars are first born, they have distinct spots in their fur and bright blue eyes. It’s only as they age and mature that their eyes darken into the usually yellow-hue and their spots fade. 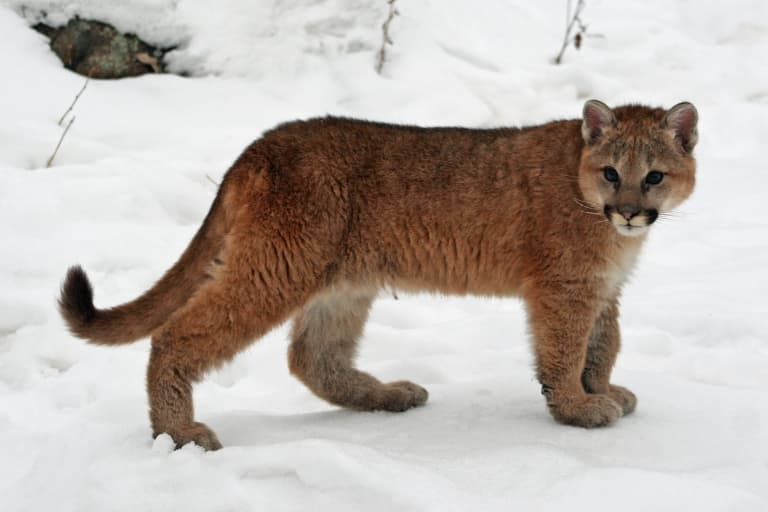 While this isn’t to say that your pets are safe roaming at night in cougar territory, you’ll find some peace of mind in knowing that cougars usually don’t target common pets like dogs or cats.

Cougars are stealthy hunters and often stick to higher elevations in order to ambush deer. Since Fido isn’t usually on their menu, cougars won’t go out of their way to hunt them down for the most part.

However, if a cougar were to feel threatened by your pet or if they were starving, there is still a possibility for attack, which is why it’s best to keep your pets close. After all, at the end of the day, cougars are still cats, and it’s in their instinct to hunt down moving things – whether it’s a deer or your pet. 3

9. Some dog breeds were created to guard specifically against cougars

While they may not be the apex predators of the food chain in the Americas, cougars are still predators known to hunt livestock, pets, and even small children in the past. This led to the development of many different dog breeds, such as the Anatolian Shepherd, who were bred to provide defense against cougar attacks for farmers and shepherds. 4