The jaguar is a truly astounding hunter. It seems to be imbued with mysterious supernatural power, appearing and disappearing at will as it stalks its prey with near peerless stealth.

Revered, respected and feared by humans throughout history, this marvellous top predator- along with its tropical habitat – is facing ever-increasing threats to its survival. 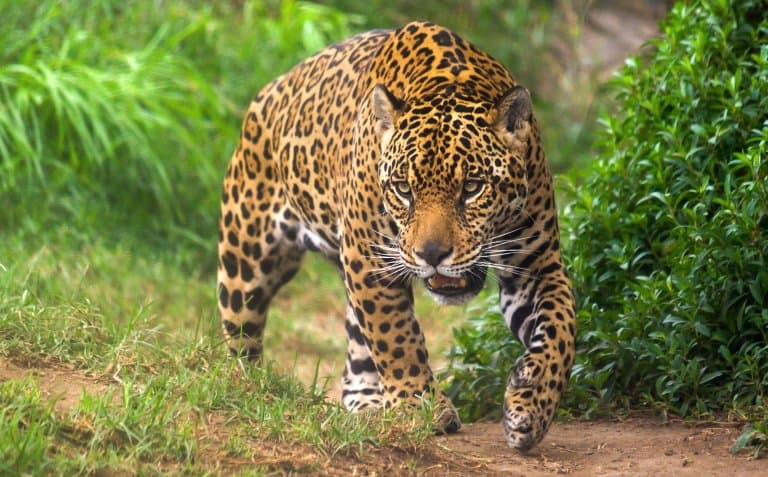 Jaguars are big cats, sharing the genus Panthera with lions, tigers and leopards.

They are the largest cat species in the Americas, and third largest in the world. They are compact and muscular, with a tan coat and spots that become rosettes on the side.

The jaguar is usually solitary except for females with cubs. They are stealthy apex predators, playing an important ecological role by balancing the populations of herbivorous prey species within their ecosystem.

Throughout their range, jaguars are sympatric with puma – this is an ecological term describing the coexistence of two species with similar niches. When their hunting options are diverse, jaguars and puma avoid direct competition through their choice of prey, as jaguars generally prefer to hunt larger animals.

Jaguar love to feed on white-tailed deer, but will also consume many other species of animals, capybara and giant anteater.

The jaguar is classified as near threatened by the IUCN since 2002, due to habitat loss, fragmentation, poaching for trade of body parts and human-wildlife conflict situations.

Unlike many cats, which tend to be nocturnal or crepuscular, Jaguars’ hunting behaviour is not confined to a specific time of day.

They rely on encountering prey as they patrol their territory, and being active throughout the day and night allows them to hunt a wider variety of species. 1 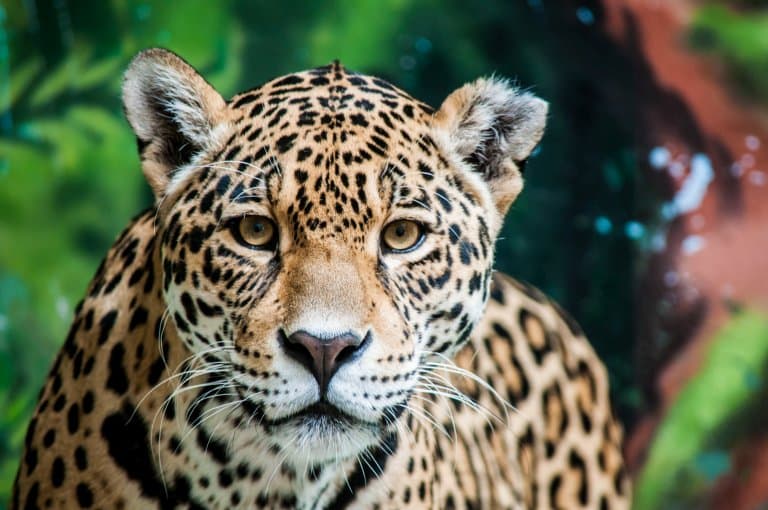 2. They are obligate carnivores, but they’re not particularly fussy

Jaguars are known to hunt over 85 different prey species – significantly more than any other big cat.

Although they generally prefer to prey upon capybara, deer and giant anteaters, they will also readily hunt monkeys, birds, caiman and even turtles when the opportunity arises; this unselective approach to hunting is thought to be a result of the unpredictability of encountering other species in their rainforest environment.

3. They have ferociously powerful jaws

When biting down on their prey, jaguars are capable of generating a bone crushing 887 newtons of force at the tips of their canines.

Relative to their size they have the most powerful bite of any big cat, and this allows them to tackle heavily armoured prey like turtles and caiman. 2

4. Jaguars are not afraid of water

Despite the widely held belief that cats hate getting wet, jaguars are excellent swimmers and actually prefer habitats with frequent rivers and water bodies.

They often hunt prey in and around rivers, and have even been observed diving from river banks directly onto caiman.

5. They are highly adaptable predators

One remote population in Brazil’s Pantanal wetland is known to rely almost entirely on fish and reptiles. 3

6. Jaguars have a unique method of dispatching their prey

Most big cat species kill their prey by constricting the throat, but jaguars take a different approach.

Their powerful jaws allow them to bite right through the base of the skull, piercing the brain of their prey for a quick, clean kill. 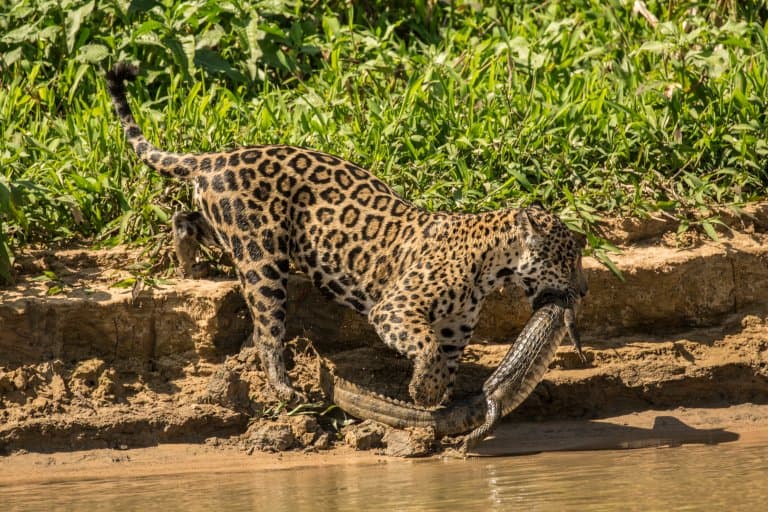 7. They are exceptionally powerful animals

Compared to other large cats, jaguars have a stocky, muscular build which grants them impressive strength.

They are easily capable of swimming across rivers while carrying large carcassess, and are even known to drag kills up to the size of a cow for over a kilometre through difficult terrain. 4

8. Jaguars can jump from tree to tree

Not quite like a monkey, but they are incredible climbers and agile for a stocky build. They are able to jump between close trees, using their incredible stength and claws to hold on.

9. They are masters of stealth

Jaguars are considered to be one of the most capable ambush predators in the animal kingdom, with an uncanny ability to become almost invisible at will.

Their legendary stealth allows them to efficiently fill their role as apex predators in many different habitats. 5

10. They closely resemble leopards, but with key differences

Jaguar have stockier limbs and a more square head. Their rosettes are darker and larger with a spot in the middle.

Out of all big cat species, jaguars are statistically the least likely to kill and eat humans – like many predatory species, the vast majority of jaguar attacks on people occur when they are hunted or cornered.

They are naturally wary animals, and generally avoid areas with even low levels of human activity. 6

12. They have a rare colour morph

The legendary cat known as the black panther is actually a melanistic jaguar, a rare mutation which occurs in only about 10 percent of wild jaguars.

As their habitat shrinks, jaguars that cannot find enough prey often turn to hunting cattle, and this invariably brings them into direct confrontation with ranchers.

14. Protecting jaguars is one of the best ways to protect the rainforest

Because jaguars require high-quality habitat almost completely untouched by humans in order to thrive, conservation projects that target them create widespread improvements to their entire ecosystem.

Jaguars, as well as other charismatic animals that attract a great deal of funding for conservation, are often referred to as ‘umbrella species’ because of the many indirect ecological benefits of protecting them. 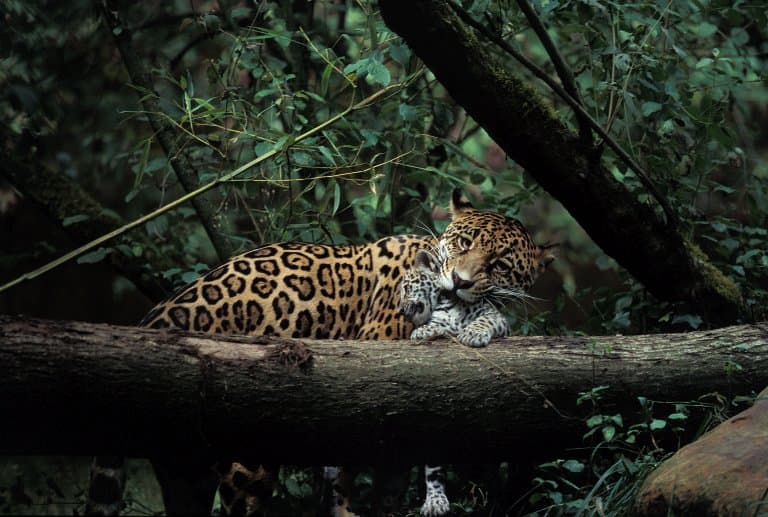