The Siberian tiger, also known as the Amur tiger, is solely found in the eastern Russian alpine forests, with a tiny population extending into Northern China.

Though the climate in the birch forests of Russian can be harsh, this tiger subspecies has adapted to the high altitude, severe environment, and lengthy winters of these northern regions.

Once extending throughout Korea, northern China, Mongolia, and the Russian Far East, fewer than 4,000 of these magnificent animals exist in the wild today. 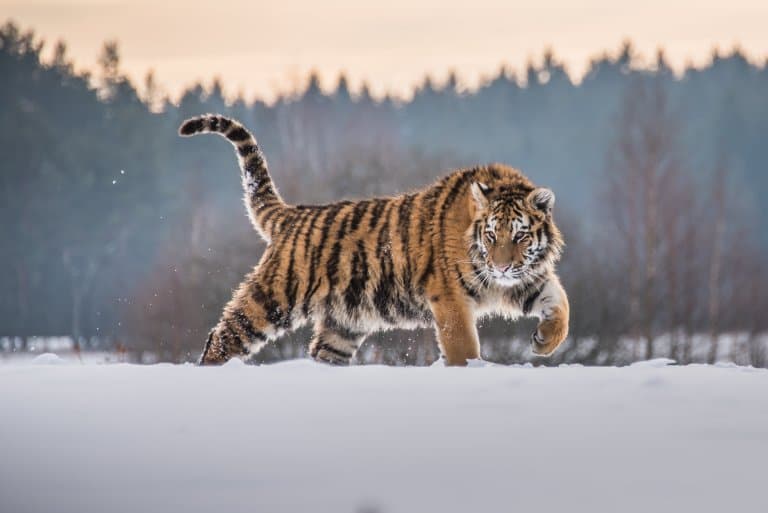 Though their population has increased over the past decade due to conservation efforts, hunting and encroachment on natural habitats still pose a threat to their survival.

The Siberian tiger has a distinct appearance from other tigers. Their coat is a lighter orange than that of other tiger subspecies, and it gets much lighter in the winter. Because of the colder temperature, their coat is longer and thicker than other tigers, as well. They have a thick mane around their neck and additional hair on their wide paws to keep them warm.

They are formidable hunters who travel long distances at night to find food, such as elk and wild boar. Tigers hunt using their unusual coats as camouflage. They lie in wait and get near enough to attack their victims with a rapid spring and a lethal pounce.

Siberian tigers are polygamous, and reproductive periods and childbirth are not seasonal. Still, Siberian tigers normally give birth between April and June.

The tigress gives birth to two or six cubs after about three to four months or gestation. Mother strives to build a den for the cubs in the safest and most difficult-to-reach areas where they will be safe from other predators. 1

A male Siberian tiger may grow to reach 10 feet long from head to tail and weigh up to 575 pounds.

For a comparison, a male Siberian tiger can be as long as a station wagon and weigh about half as much as a grand piano. Females are smaller, typically weighing 240 to 290 pounds. 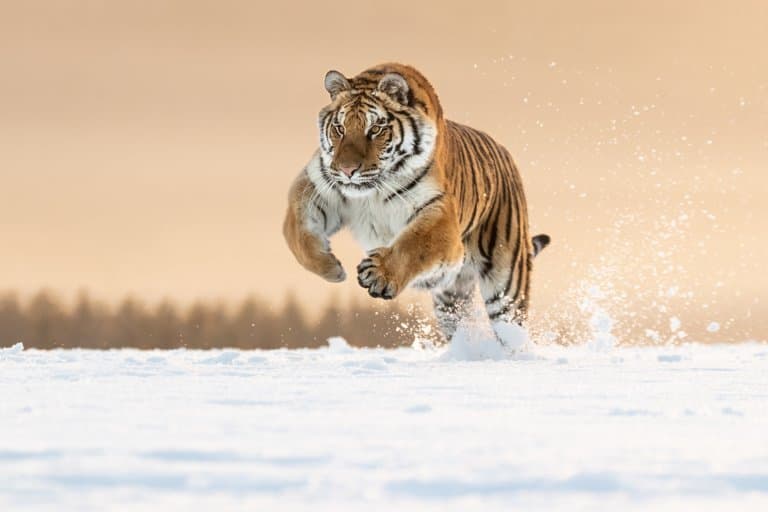 In captivity, the largest tiger on record is a male Siberian tiger called Jaipur who was owned by an American animal trainer named Joan Byron Marasek. In 1986, at the age of nine years old, Jaipur measured 3.32 m (10 ft 11 in) long and weighed 423 kg (932 lb).

2.    They are the only tigers that can survive in snow

Aside from their size, Amur tigers have various adaptations to help combat the cold. Siberian tigers’ coats grow thicker and longer than other tiger species.

These cats also have “winter boots” fitted into their paws to protect them from the frigid snow, and a layer of fat on their belly to help keep out the cold. 2

3.    No two tigers have the same stripes

Just like human’s have fingerprints, each tiger has its own unique pattern.

Siberian tigers also have the palest orange coat and the fewest strips of any tiger species. This is to help them blend in with their snow-covered habitat. They also have black and white spots behind their ears that allow the cubs to easily follow their mother through the forest.

Unlike most cats, tigers love the water and are excellent swimmers. Because of their thick coats, they will submerge themselves in rivers during the summer months to keep cool.

Staying near water is also a great way to find food. Tigers not only hunt prey on land, but also fish. During the mating season, tigers will often catch fish in mountain rivers.

Though Siberian tigers are always on the go in search of prey, they do much of their roaming within their own region. If there is enough prey within the bounds of their domain, they never leave.

The size of the habitat varies depending on the gender, age, and quantity of prey in the area. Tigers with cubs, for example, hunt in a significantly narrower area than single animals. They will mark their territory with their scent or leave markings on trees with their claws.

For the first two months, tiger cubs are completely reliant on their mother. The eyes of a tiger cub open between six and twelve days after birth. However, they still won’t achieve full eyesight until a few weeks late.

The tigress is exclusively responsible for the cubs’ security and care during this period, which is why she only leaves them for brief periods of time. 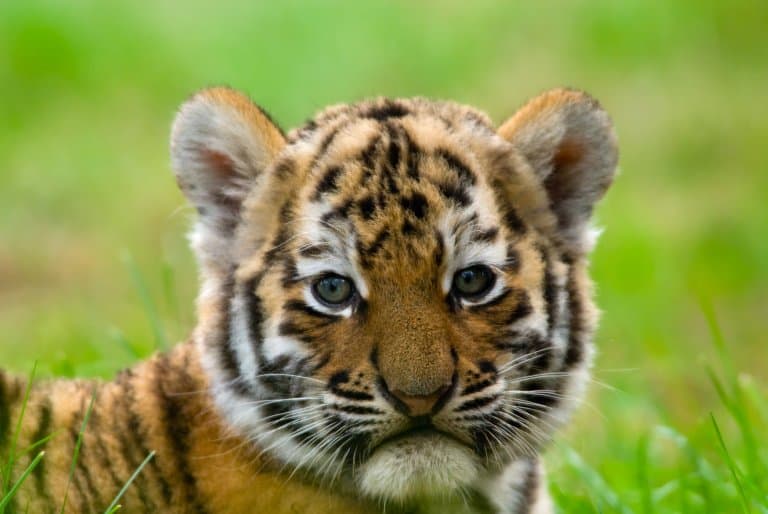 Around two months of age, cubs will begin to follow their moms out of the cave. They do not, however, take part in the hunt at this time. Instead, they wait in a secure location for their mother to return with the food.

It isn’t until they are about eight-month-old that the mother will begin teaching her cubs to hunt. Tiger cubs spend the most of their time playing with their siblings and their mother. Playing helps developing tiger kittens learn vital life skills including stalking, pouncing, swatting, and climbing.

The tigress’s primary priority is teaching her cubs how to hunt and defend themselves before that set off on their own. 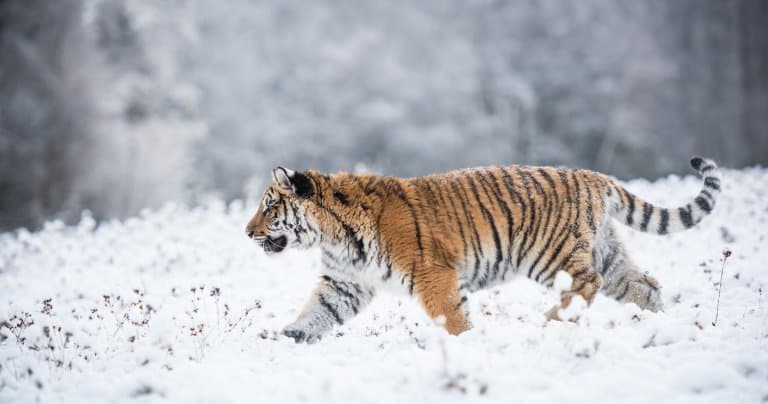 8.    A Siberian tiger’s night vision is six times strong than a humans

Tigers have more rods than cones in their eyes to help with night vision. The increased number of rods enables them to detect prey movement in conditions when color vision would be ineffective.

Tigers also have a structure called the tapetum lucidum in the rear of the eye, behind the retina, that allows them to see better at night. This mirror-like structure reflects light back into the eye for a second time, aiding in the production of a brighter picture. When a light is put on their eyes at night, this is what causes them to glow. 3

9.    They are extremely patient hunters

Tigers spend a significant amount of time hunting. They are extremely strong and have highly developed sensory organs. Only one out of every 10 efforts are successful.

If the effort fails, the tiger prefers to look for a new victim rather than following the previous one.

10. Siberian tigers can eat up to 60 pounds in one night

To survive in the frigid temperature, an adult must consume around 20lbs (9 kg) of food every day.

A hungry tiger may consume up to 60lbs (27 kg) in one night, however they normally consume less. 4

Throughout many cultures tigers are seen as heavenly spirits.

In Siberia and Eastern Russian, the tiger is known as the guardian of the forest. The Indigenous peoples of this area view the tiger as a spirit who protects the forest and keeps nature in balance. The Tungusic people even refer to a tiger as “Grandfather” or “Old Man.”

In China, tigers are symbolized as the protections of goodness and the destruction of evil. They are also seen as a balancing force opposite the dragon. While the dragon represents yang (masculine energy), the tiger represents yin (feminine energy). 5 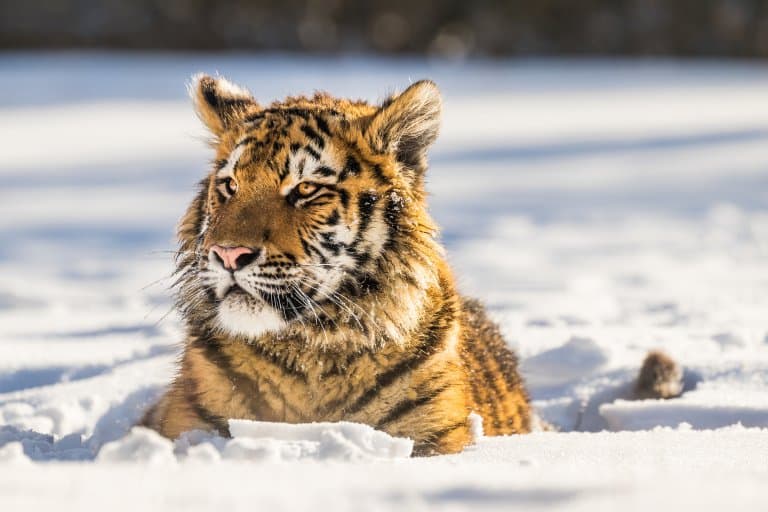 12. War has taken a toll on the tiger population

Siberian tigers once widely populated the Korean peninsula. So many, in fact, it was known as the land of tigers.

However, during the Japanese colonial period of between 1910 and 1945, hundreds or thousands of wild animals, including bears, tigers, leopards, and wolves were hunted down or killed every year by the Japanese on the excuse of protecting people from the animals. 6

In October 1921, the last Korean tiger was reportedly shot dead on Mt. Daedeok in Gyeongju.

13. The Siberian tiger is the national animal of South Korea

The tiger holds a deep status in South Korean culture. Siberian tigers often show up in Korean folklore and mythology as divinities or the soul of gods.

They are also represented in various painting and sculpture throughout Korean history. For this reason, the Siberian tiger (or Korean tiger as it is known within the country) named the national animal of South Korea. 7

14. The sub-species has been making a comeback, but still faces many threats

In 2008 the IUCN Red Lest of Threatened Species switch the status of Siberian tigers from Critically Endangered (CR) to Endangered (EN). This is considered to be a remarkable comeback since the population fell as low as 20 in the 1930s.

However, these tigers are still at risk. According to the Amur Tiger Center in Russia, 20-30 tigers are poached each year in the country. This accounts for 7-85% of all Siberian tiger deaths.

Tigers are mainly poached for their fur and for their body parts for use in Traditional Chinese Medicine. 8