The Tasmanian devil is a ferocious marsupial with shockingly powerful jaws, decidedly unsavoury feeding habits and a blood-curdling screech.

Historically vilified and persecuted to near extinction, attitudes towards these voracious little gremlins have, luckily, done a U-turn in recent years – just in time for the arrival of a strange epidemic that is once again threatening their survival. 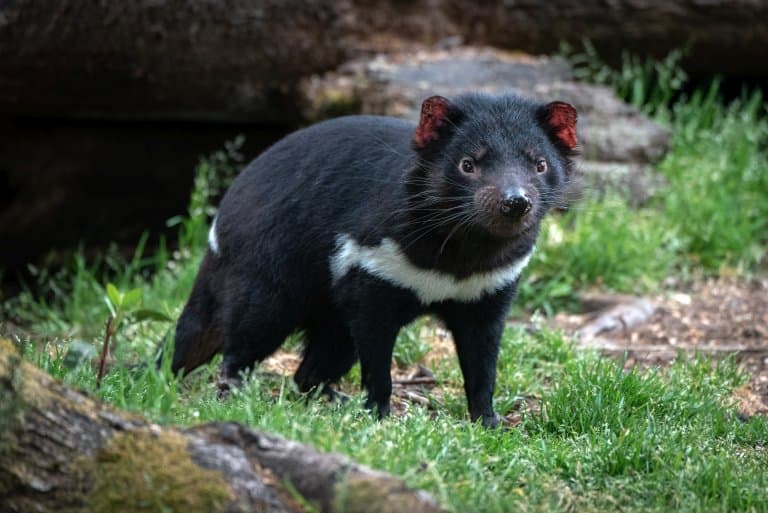 Tasmanian devils belong to the family Dasyuridae, a large and diverse group of marsupials containing 69 extant species that are organised into 21 genera.

Tasmanian devils are unique amongst their family in that they predominantly consume carrion while their close cousins tend to be insectivorous. Their food preference is wombats due to their high fat content, but will also eat rabbits, wallabies, birds, fish, insects, fruit and much more.

Dasyurids also exhibit some interesting morphology that is often described as ‘primitive’ – unlike kangaroos, koalas and bandicoots they have retained many of the physiological features of long-extinct early marsupials, including separate toes, simple pouches and an archaic dental structure.

They are the largest carnivorous marsupial in the world, although about the size of a small dog, with a muscular build and large head. They have black fur and a pungent odour.

The survival of Tasmanian Devils is seriously threatened by Devil Facial Tumour Disease and their population is estimated to have declined by more than 60% since 1998. Their conservation status is currently classified as endangered by the IUCN as they are at risk of extinction in the wild.

1. They have a blood-curdling scream

It’s an extremely loud and quite disturbing ‘screech’, they use it when fighting each other, scare away predators and sometimes during feeding.

2. Their name was derived from hearing their unearthly screams

The Tasmanian devil derived its name from early European settlers who heard its blood-curdling screams and then witnessed the ferocious dog-like animal with red ears, large jaws and sharp teeth and called it ‘The Devil’.

3. They are champion biters

Relative to body size, the Tasmanian devil has the strongest bite force of any extant mammal and can open their jaw to 75-80 degrees! Their teeth and jaws resemble that of hyenas.

This monstrous biting power helps them to tackle large prey and also to crush bones, which comprise a significant portion of their diet. 1

4. They pack a serious punch for their size

The forelimbs of the Tasmanian devil are exceptionally strong, and tipped with vicious claws that give them an upper hand when grappling with large prey, digging, or fighting with conspecifics.

Along with their enlarged heads and necks, their front-heavy musculature is thought to contribute to their unusual shuffling gait. 2

Cannibalism is rare among mammals, but adult Tasmanian devils are known to kill and eat juveniles of their own species when food is scarce.

Unlike the adults, younger individuals are confident climbers, and it is thought this may be an adaptation for avoiding predation by their elders.

6. They are capable swimmers

Tasmanian devils have been frequently observed swimming across rivers up to 50 metres across.

They are undeterred by cold water, and will happily cross frigid glacial streams in search of food or favourable territory.

7. Their choice of habitat is more preference than necessity

Tasmanian devils are a highly adaptable species, able to thrive wherever they can find food.

Although they prefer dry or coastal forest, they are found at varying densities in every habitat in Tasmania, including on the outskirts of towns. 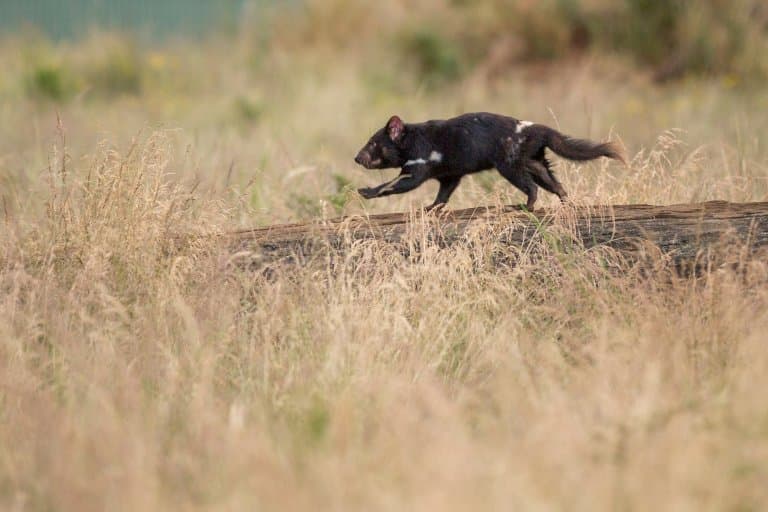 Unlike many of their closely-related species, Tasmanian devils have efficient thermoregulatory adaptations.

They are able to sweat, so they can remain active throughout the day without overheating.

9. They are able to detect a carcass from up to a kilometre away

This is due to their remarkable sense of smell which makes them excellent scavengers.

They play an important role as ecosystem cleaners, and are considered a keystone species in Tasmania. 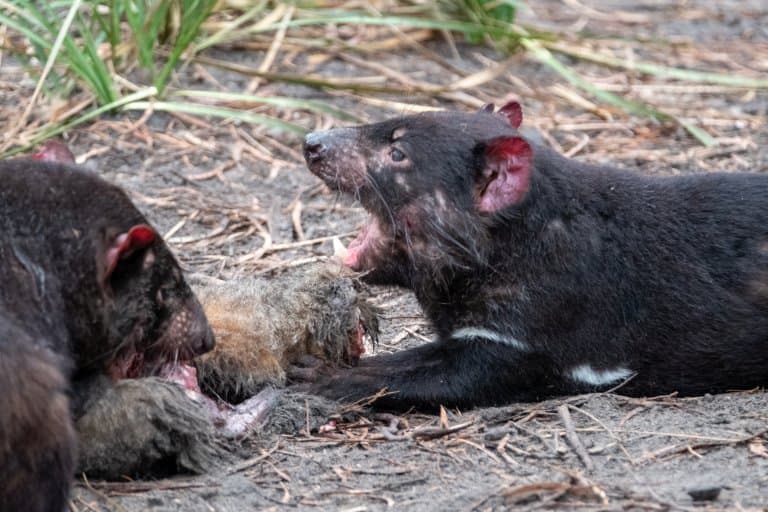 10. They are not as solitary as we once thought

It has recently been discovered that Tasmanian devil populations follow an intricate social contact network, in which individuals do not defend a strict territory but wander throughout their home range interacting with others as they pass.

This kind of social organisation puts them at high risk from diseases like DFTD, as a single infected individual is likely to interact with and infect many others within its network.

While generally solitary, eating is a social event and they gather in a group of up to 12 individuals in ferocious commual feeding frenzy, which can be heard from over several kilometers away.

This combination is a unique trait amongst carnivores.

Researchers believe the noise is so others can help share in the meal, and food is not wasted. The amount of noise is often correlated to the size of the carcass.

12. Baby Tasmanian devils must fight each other to survive

Tasmanian devils produce huge litters of tiny, underdeveloped babies, giving birth to up to 30 joeys at a time.

However, each female only has four nipples, so the joeys need to compete fiercely for food from the moment they are born.

13. They are threatened by a strange and terrible disease

Since the late 1990’s, Tasmanian devils have suffered from an unusual fatal infection known as Devil Facial Tumour Disease (DFTD).

It is an aggressive, non-viral cancer that spreads through contact with infected cells, and it is thought that it is mainly transmitted through fighting or the sharing of carcasses. 3

As scavengers Tasmanian devils are drawn towards roadkill, and this invariably leads to high rates of road mortality – particularly in naive individuals who are released as part of captive-breeding programs.

Measures including traffic-slowing ramps, public awareness campaigns, road signs, and building wildlife barriers and bypasses to prevent devils from crossing the road have all proven to be effective in reducing this risk. 4

15. Tasmanian devils are the subjects of a massive conservation effort

Conservation organisations are working tirelessly to combat the spread of DFTD, seeking out unaffected animals and establishing captive ‘insurance populations’ throughout the world.

In 2020, Tasmanian devils were re-released into a large protected sanctuary in New South Wales, Australia, and have managed to breed successfully ever since; this marked the first time they had bred in the wild in Australia for about 3,000 years! 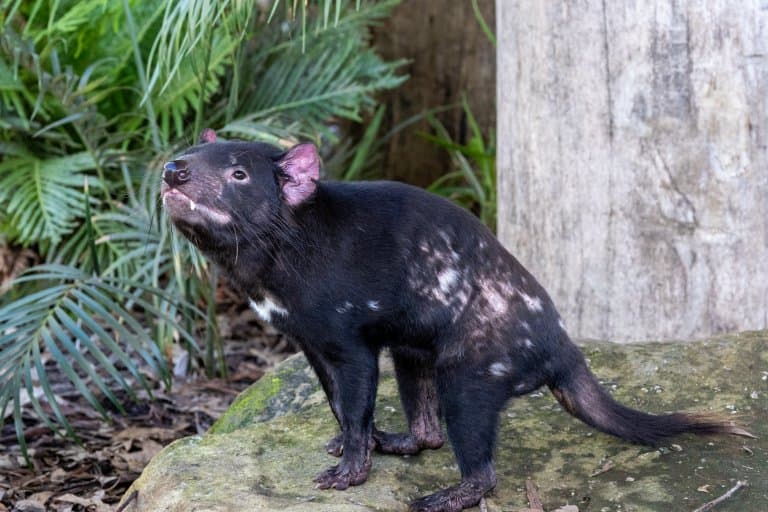