Koalas are unique animals native to Australia where they are the only extant (living) species of their family. While their closest living relative is the wombat, it’s not the same – nor is it a bear despite the misnomer “koala bear”.

Koalas are their own, individual species with many special quirks and facts that have made them one of the more popular animals in the world. 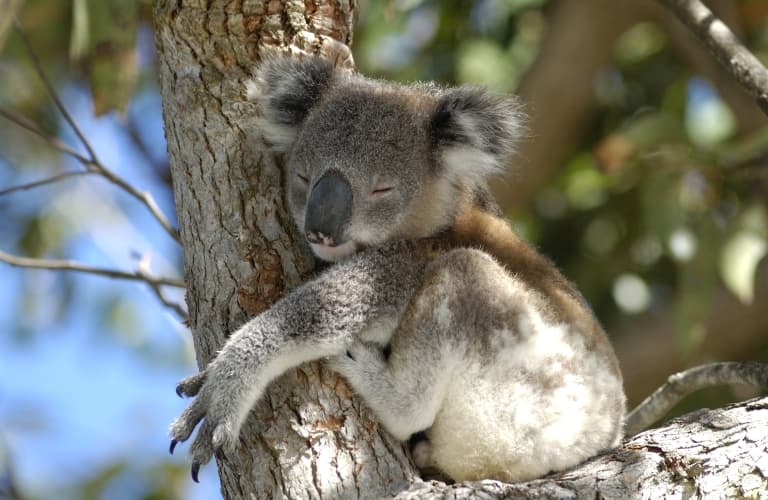 Koalas are nocturnal herbivores that can be found in the treetops across Australia where they spend their days (or rather nights) eating from their favorite eucalyptus trees.

Koalas are a national symbol of Australia and are a huge draw for tourists. They can only be found in the wild on the southeast and eastern sides of Australia, along the coastlines of Queensland, New South Wales, South Australia and Victoria.

Sharing traits with a variety of other species, koalas are some of the most unique and weirdest animals around – especially once you learn what they eat as infants!

1. The koala is the only surviving species in the family Phascolarctidae

Koalas are what is known as an extant species. This means that they are a living species. They also just so happen to be the only living species left in the family Phascolarctidae, which is one reason these critters are so unique.

The closest living relative is the wombat, which is one reason why the koala and it have so many species. However, the distance between these two species in the family tree has allowed the koala to grow into a unique species… 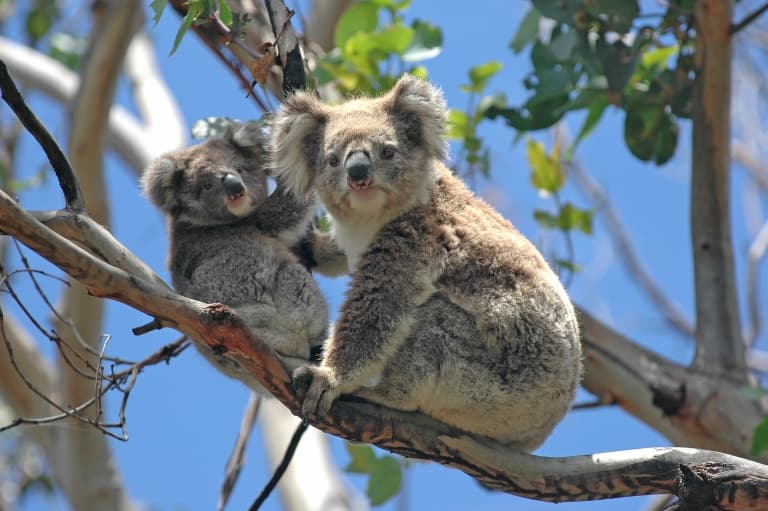 One of the most common names for a koala that you may have heard is the “koala bear”.

While their round ears and soft fur may certainly cause them to look like a bear, these two couldn’t be further apart. They are actually a marsupial.

For as cute as they are, koalas do have some rather icky facts. One of them? After they have been weaned off milk, young koalas (known as joeys) will eat their mother’s fecal matter before they switch to eating leaves on their own. 1

While it may seem gross, koalas aren’t the only species to do this: pandas, hippos, and even elephants are known for doing the same. And there’s some science behind it. Consuming their mother’s waste allows for young mammals to develop strong gut bacteria that will help them with digestion in the future.

Koalas spend most of their day eating leaves. While they eat from several different species of trees as need, they tend to eat strictly from eucalyptus trees. 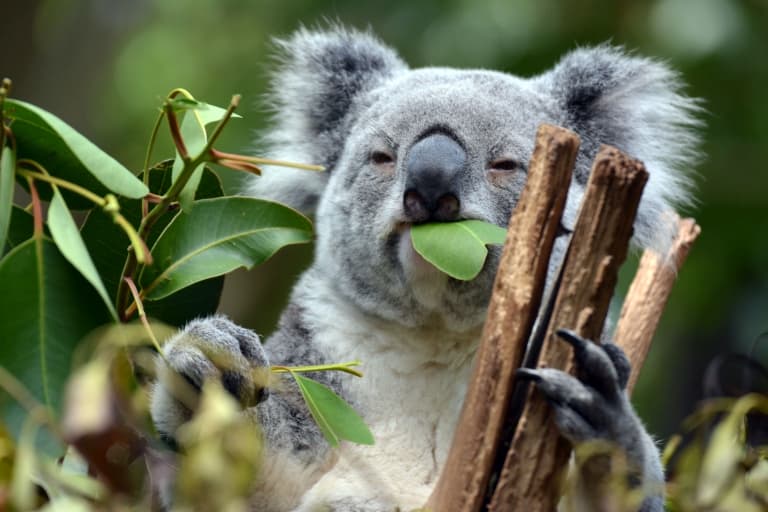 5. They are an indicator species

In nature, there are some species that we call “indicator species”. These are species that reflect the state of their environment, helping us to better understand how the ecosystem is faring.

That’s not the only way koalas contribute to the environment either. Their waste is known for helping spread seeds and encouraging trees to grow, creating a larger ecosystem with greater biodiversity (variety of species).

6. Koalas have their own holiday

Not only do we get to celebrate koalas on Save the Koala Day on September 24th of each year, but the Australian Koala Foundation has also designated the entire month as Save the Koala month to help encourage conservation efforts for this special little marsupial.

Because koalas spend so much time eating mainly leaves, they don’t need to drink water very often. Koalas have a large amount of a unique bacteria in their gut that allows them to better process leaves than other species, including humans. This means they’re able to extract more water and fiber from their diet – which translates over to less time at the watering hole. 2

In fact, it’s believed that the Aboriginal people of Australia named the koala, a word which is thought to mean “no drink”.

Remember how we said that koalas have a lot in common with many other species? Well, they also have fingerprints!

Fingerprints are a rare occurrence in the animal world. While humans have them, you won’t find them in many other places aside from primates – and koalas. However, not only do koalas share fingerprints with humans, but they’re nearly indistinguishable for one another.

Makes you wonder how many humans could have been framed for a koala’s crime…just kidding, of course! Although, while it is highly unlikely that a koala will contaminate a police scene, as the animal with the closest fingerprints to human, the possibility is never zero.

It can be lonely at the treetop. Luckily, these solo marsupials have no qualms about spending their time with their favorite critter: themselves.

However, due to deforestation and human interference, many koalas are finding themselves too close for comfort with other members of the species. Not only does this put a strain on resources but it can cause stress for the koalas forced to live in close quarters with one another.

Because their eucalypt diet has limited nutrients and calories, koalas spend most of their time sitting and eating – or just fast asleep. 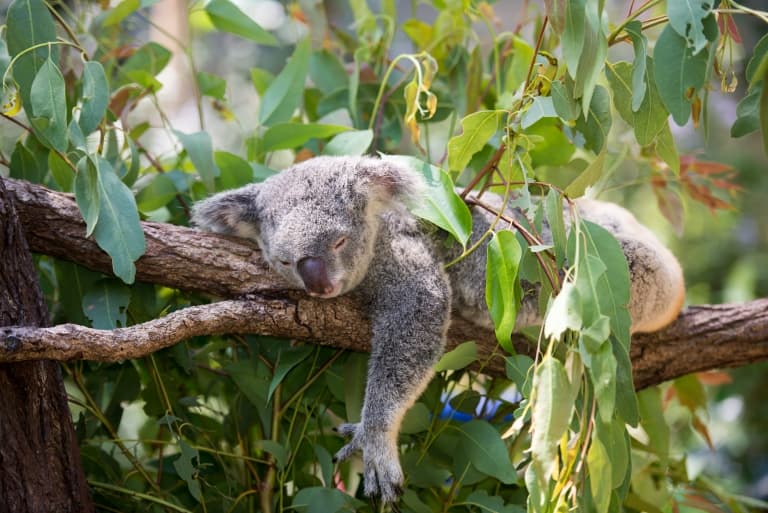 11. Koalas have a specially padded butt, so they can sit in trees

They have a reduced tail, a curved spine, and a round rear end with strong cartilage for all that sitting and sleeping.

12. Chlamydia is a serious disease for koalas

Koala populations are susceptible to chlamydia with up to 100 per cent of some populations testing positive for the sexually transmitted infection which can cause blindness and reproductive tract infections. In 2021 a vaccine was being tested in a large clinical trial in Queensland to help protect koalas from the disease. 3

13. Koalas are listed as a vulnerable species by the IUCN in 2016

Sadly, koala numbers are on the decline. The main threats to koalas are habitat destruction, droughts, bushfires and disease. To help, sanctuaries and translocation efforts have been set up in Australia. 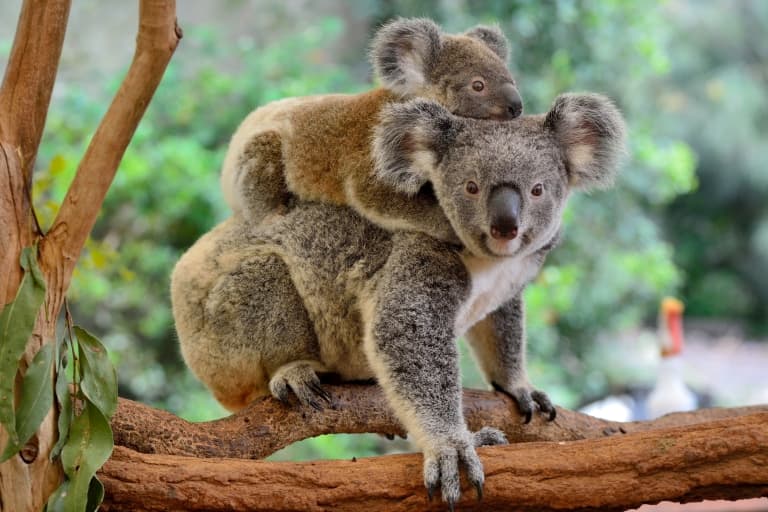