Kangaroos are probably one of the most iconic animals in Australia, along with koalas and flying foxes. However, kangaroos aren’t actually one species. Instead, the name refers to four different species of kangaroo, each one as different as it is similar to the others.

Native to Australia and New Guinea, kangaroos are herbivores. In the wild, they typically only live for around five years. However, with human care, they can live to be up to 25 years old. 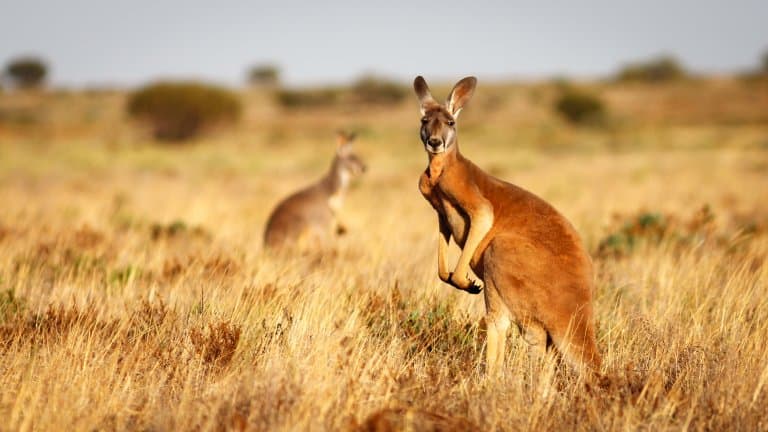 Kangaroos are a type of marsupial, like wombats and opossums.

This means that they give birth to an underdeveloped baby, known as a joey, within just a few weeks after mating. For kangaroos in particular, the joey then lives in their pouch for another year before they’re ready to explore the world.

There are different names for groups of kangaroos, including court, mob, herd, and troop. Kangaroos usually live in groups of 10 or more with complex social structures.

The conservation status of all four species of kangaroo is of least concern according to the IUCN. Like all wildlife in Australia, kangaroos are protected by legislation, however commercial hunting is permitting are government controlled plans.

1. They are the largest marsupial in the world

The red kangaroo (Osphranter rufus) is actually the largest living marsupial anywhere in the world.

2. There are tens of millions of kangaroos in Australia

In 2020, the Australian government estimated that there were 42.8 million kangaroos in the commercial harvest areas of the country.

This means that there are more not accounted for in both Australia and New Guinea. 1

3. Their hind legs are spring loaded

Kangaroos have large elastic tendons in their hind legs that store elastic strain energy. This helps provide most of the energy needed to hop, rather than muscular effort.

4. They can hop over 8 meters in a single leap

Large powerful red kangaroos are able to leap over 8 meters (25 feet) in a single large jump. 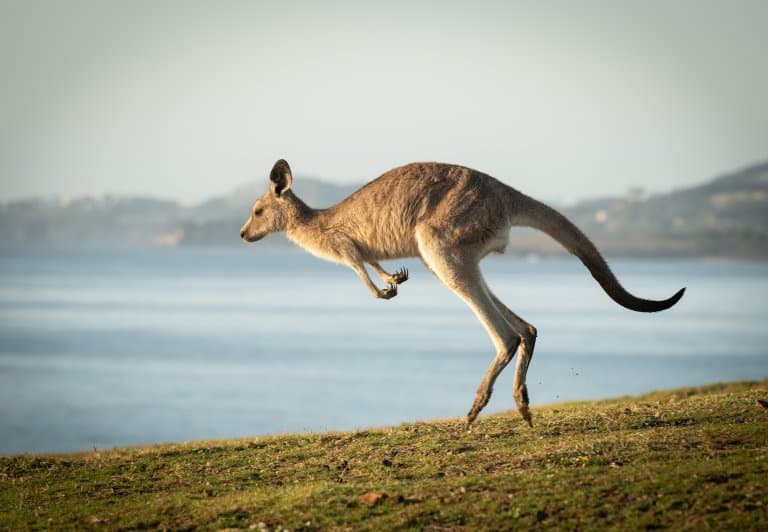 5. Kangaroos are a national symbol of Australia

You may know that the koala is one national icon in Australia. However, so are kangaroos!

As an important part of the culture of the country, you can find kangaroo imagery everywhere in Australia. Most importantly, they appear on the coat of arms as well as some of the currency in the country.

There are also many government organizations that utilize the kangaroo’s iconic appearance as their logos. This includes Qantas Airways Limited, the world’s third oldest airline that’s still in operation, as well as Royal Australian Air Force.

6. Kangaroos are a significant source of resources in Australia

Kangaroos are considered normal wild game in Australia. This means that it’s common to see them hunted: for their leather, for their meat, and even to protect the grazing lands of different animals.

Kangaroo meat is actually considered to be healthy for human consumption, especially compared to other traditional types of meat like beef or pork. This is because kangaroo meat is lean and lacks a high-fat concentration.

When humans eat, our food goes directly into our stomach to be broken down and then continues through our intestines. Kangaroos aren’t the same.

Because kangaroos are herbivores eating highly fibrous food, there’s a different process to breaking down their food. Like cows, kangaroos will actually regurgitate their food before eating it again, allowing for it to easily pass into their single-chambered stomach.

Cattle release large amounts of methane through farting and burping due to their herbivorous diet. However, kangaroos don’t have the same problem, instead by-product gases are turned into acetate which is a form of salt, and this is then used to provide further energy.

Scientists are studying the potential use of such bacteria to help in this process for cattle, to help reduce carbon emissions. 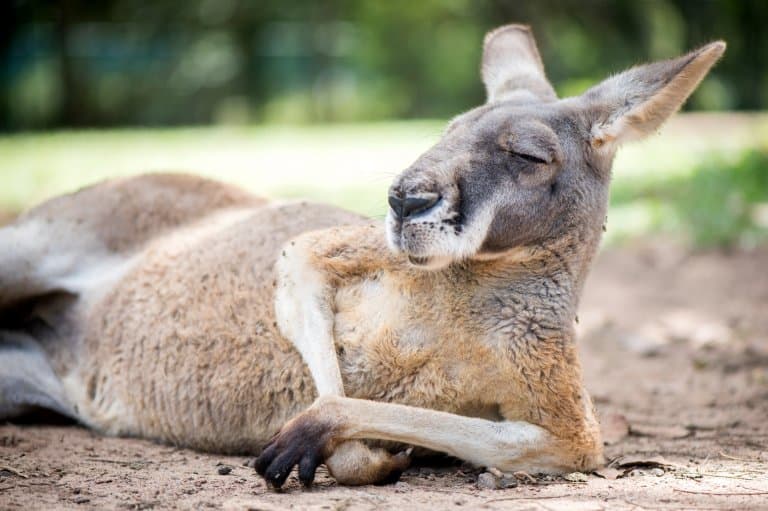 It’s not just their stomach and digestion process that’s unique, however. Kangaroos also have teeth that are rare among mammals. While there are certain anatomical differences in their jaw bones, one of the most notable differences is in their molars.

Whereas humans have one set of adult teeth, kangaroos, like elephants, have more. Because chewing grass can actually be harsh on their teeth, kangaroos have evolved the ability to replace their teeth after they wear down. Worn-down molars will move forward before eventually falling out and being replaced by new, healthier teeth.

This is known as polyphyodonty, and it’s only found in two other types of mammals: elephants and manatees. Overall, what is means is that their teeth are constantly being replaced by new ones.

10. They’re the only large animal to rely on hopping to get around

You’re probably used to seeing frogs and rabbits hop to get around. However, hopping is actually fairly rare in the animal world. It can be difficult to get around quickly, and hopping can take a lot of energy.

However, despite some of the drawbacks of hopping, kangaroos are actually the largest animal to use it as their primary mean of locomotion (movement).

11. They use their tail as an extra leg at slow speeds

Kangaroos can employ pentapedal locomotion, which is where they use their two forelimbs and tail to form a tripod, and move their two back legs forward to move.

All species of kangaroo are known to fight, over access to females, or limited drinking spots. They are powerful and muscular, and will stand on their hind legs with their heads held high and paw at each others heads and shoulders like a boxing match.

They will lean back and sometimes perform leaping kicks to the body. Most fights are relatively short and proceeded by mutual scratching and grooming.

There is a well known virual video of a man boxing a kangaroo, when it had his dog in a head-lock.

Or hop backwards! This is because of their large feet and long tail, that restrict them from this movement.

14. They have been known to drown enemies

Kangaroos are excellent swimmers, and if pursued by a predator such as a dog, they will instinctively run into water and hope they are not followed.

If followed by the predator, such as a dingo or feral cat, the kangaroo can hold them at bay, with their powerful forelimbs, and even drown them. 3

Sadly the lights of cars and noise can scare kangaroos and cause them to run in front of cars, which can be fatal for them, and cause serious damage to vehichles due to their size. 4 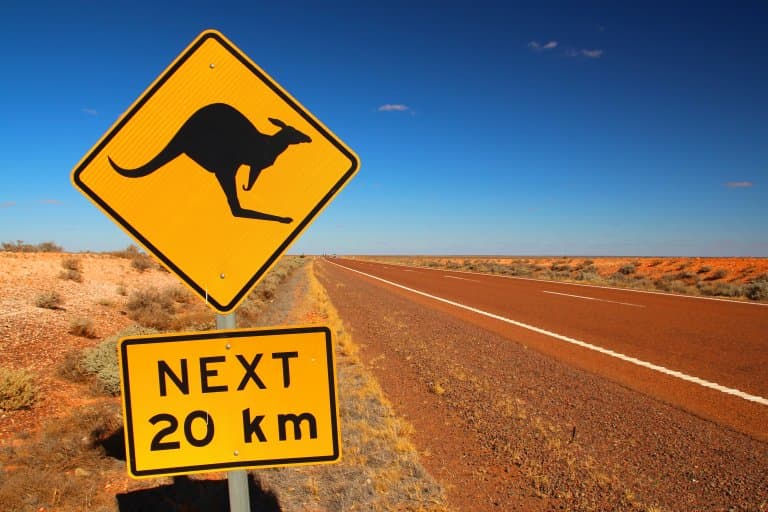