The Quokka, sometimes known as short-tailed scrub wallabies, are small wallabies about the size of a cat that are native to Australia.

They are herbivorous, mainly nocturnal – and famous for cute selfies, due to their happy and rather adorable appearance. 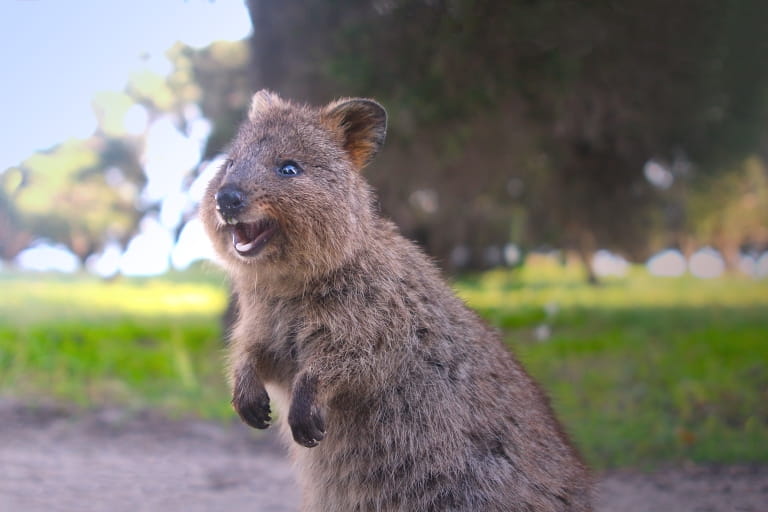 Quokkas are found in a variety of habitats across Western Australia. Because they are herbivores, they must live somewhere with consistent access to large amounts of vegetation. As such, quokkas are vulnerable to dangers from wildfires and drought that destroy their habitats.

They are known for memes as the ‘happiest‘ animal on the planet, due to their protruding front teeth and near constant smiling appearance.

1. They have many names

Their name comes from the Aboriginal Noongar people of southwest Western Australia. There, they are known as ban-gup, bungeup, and quak–a.2 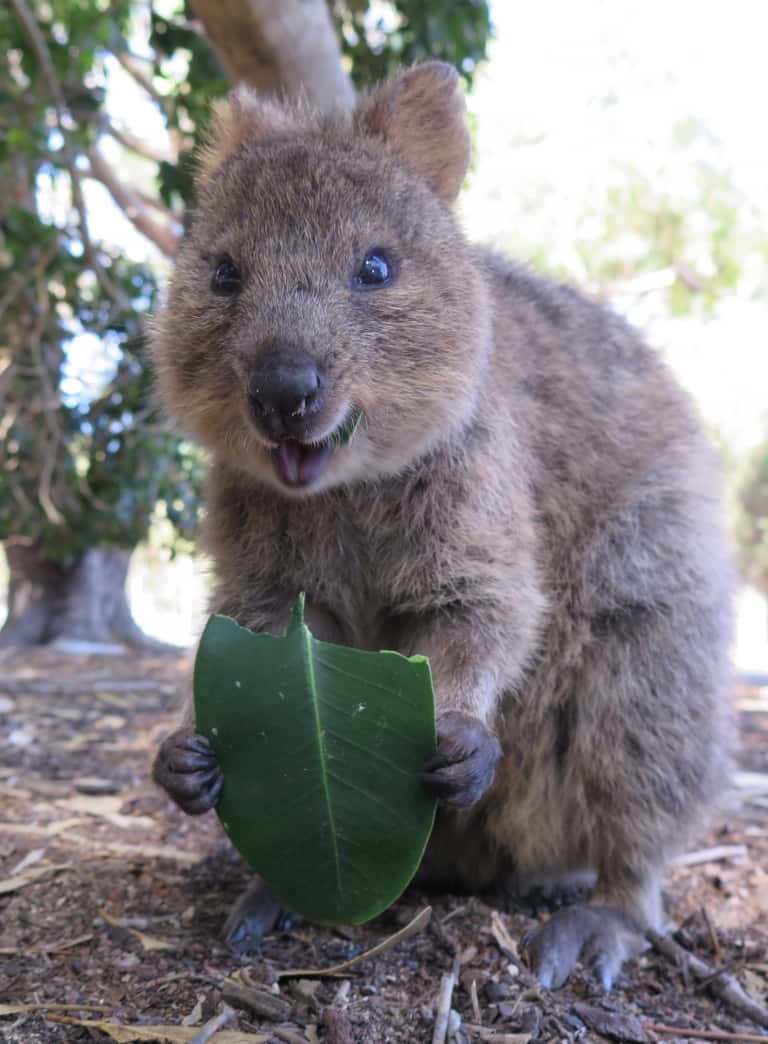 2. They are related to kangaroos

Quokkas are members of the Macropodidae family, which includes kangaroos, wallabies, and pademelons.2

3. They can climb trees

Although quokkas primarily walk, they can climb trees and shrubs to find food and escape from predators.

They spend the evening and night hours browsing for food and sleep during the day.

5. They have an island named after them

A Dutch explorer named Willem de Vlamingh spotted quokkas off the coast of an island in 1696. Mistaking them for rats, he called the island “Rottenest” (“rat’s nest”). The island is known by the Whadjuk Noongar people, its original inhabitants, as Wadjemup (“place across the water where the spirits are”). 3

6. They live in very limited areas

Quokkas live in isolated patches of the Jarrah Forest in mainland Australia. They also live on Bald Island, and a large quokka population lives on Rottnest Island.

7. They are known for their smiles

Quokka skulls have small jaws and protruding teeth that make them look as if they are constantly smiling. 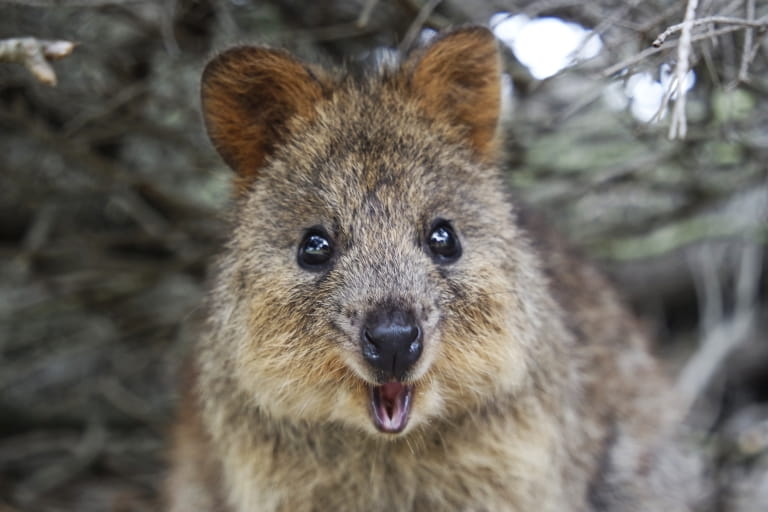 Many quokkas have little fear of people. Due to large numbers of visitors in their habitats, quokkas have adapted to human interaction and will approach people in search of food. They even get close enough for visitors to take selfies with them. 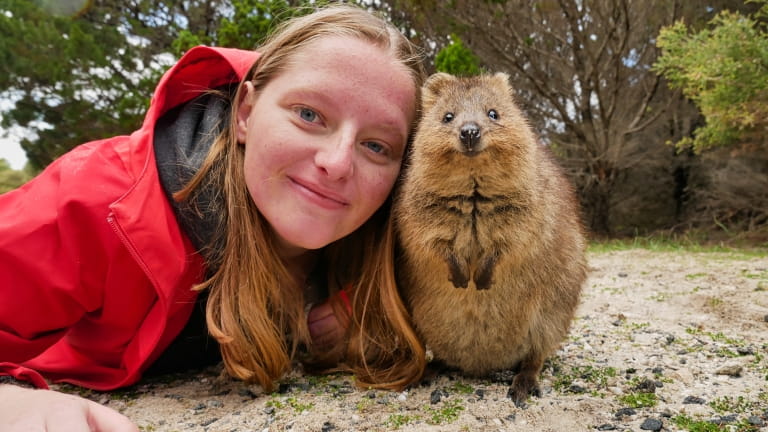 9. Touching them is forbidden

Despite their friendly appearance, touching or harming quokkas is forbidden and sometimes dangerous. They are classified as a vulnerable species by the IUCN, leading to regulations surrounding their habitat and human contact. Quokkas are capable of inflicting severe bites and transmitting salmonella. Touching or harming quokkas carries large fines from the Australian government.

10. They live in microhabitats and prefer certain ones

Wildfires, predators, and habitat destruction have reduced the size of areas that can sustain quokka populations. The remaining populations inhabit small localized areas in swamps and forests. Research has shown that some populations of quokka exhibit habitat preferences and will inhabit areas that other quokkas will not, such as certain types of swamps. 4

Whether a quokka is territorial depends on where they live. Males who live in mainland Australia will defend their territory against other males. Females who live on Rottnest Island, however, have been observed to live in overlapping groups and even share shelter in the daytime. 5

12. They survive by storing fat in their tails

Quokkas have long, thick tails that contain fat stores. During periods of drought or low food availability, these fat stores can be broken down to sustain the quokka until another source of food is located. 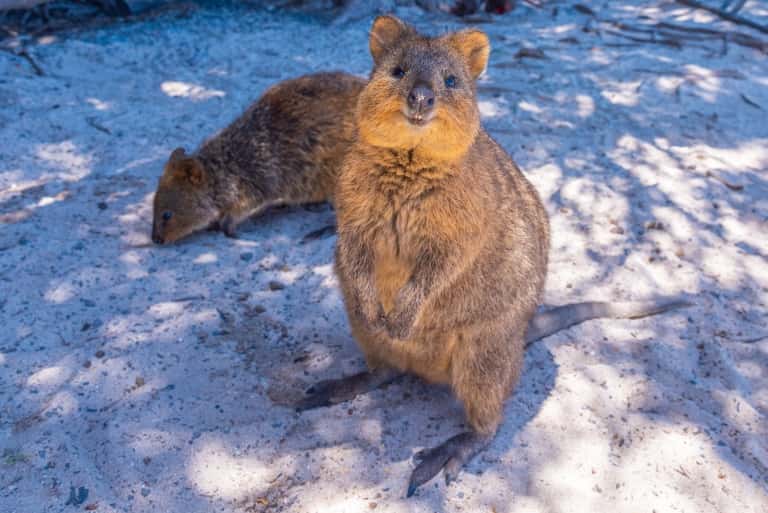 13. Their reproduction depends on where they live

Those who live in mainland Australia breed year-round and can have up to 2 offspring a year. Quokkas who live on Rottnest Island breed only once per year and typically have only 1 offspring, called a joey.

14. Their primary predators are invasive species

The introduction of red foxes and housecats to quokka habitat has been a major factor in population decline. Without natural defences against these skilled predators, quokka populations have been forced to inhabit smaller regions to avoid them.

15. Quokkas do not throw their babies to escape predators, but may drop and sacrifice them

An internet meme accuses the quokka of “tossing their babies” at at predators to escape, which is not entirely accurate. Researchers have found female quokka to relax their pouch muscles, to drop their babies to allow them to escape a predator – and near certain death for both mother and baby. This is the ultimate survival strategy available to marsupials in the wild. 6

16. Quokkas are making a comeback

Conservation plans instituted by the Australian government protect and restore quokka habitats, including those destroyed in the 2015 Australian bushfires. Thanks to these regulations, quokka populations are growing.