A hyena is a prehistoric predator that has outlasted some of the most iconic monsters of the palaeolithic, survived the ice age, and was chasing humans out of caves for tens of thousands of years.

It has some of the most powerful jaws in the animal kingdom and most of what we know about certain populations of early hominids come from bone fragments that have been chewed by one of its ancestors. 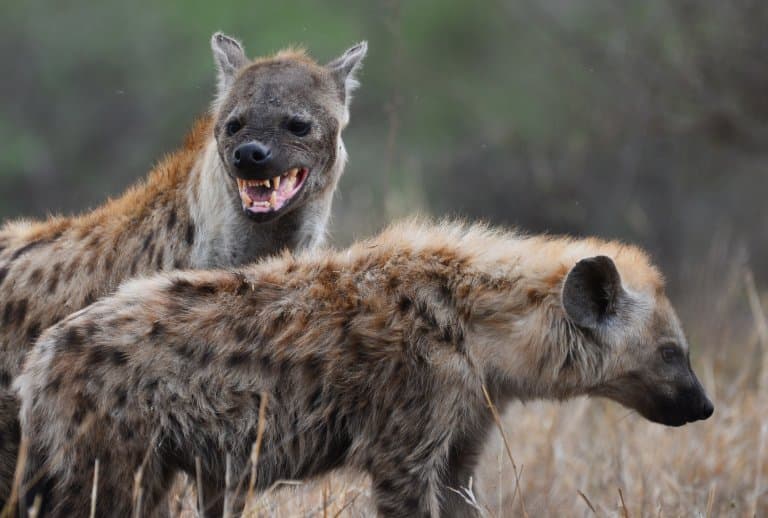 Hyenas are an incredible ancient lineage of predators who existed in the time of the Smilodon, stuck around through various human-attributed die-offs, and still have the power to send to send shivers down your spine with their iconic laugh.

Although they look and behave like dogs, they are actually closer to felines (cats) in the way they groom, mate, scent and defecate and are in the suborder Feliformia.

There are 4 species of hyena all from different genus – the striped hyena, the brown hyena, the spotted hyena, and the aardwolf. They can be found in Africa, the Middle East and Asia and live in savannas, grasslands, and woodlands depending on their food source.

The largest and most fearsome hyena is the spotted hyena, which grows up to 5 feet in length, weighs between 90 – 140 lbs and hunts in groups. The aardwolf is the smallest, growing to around 2.5 feet and weighs just 17 pounds, which is smaller than most dogs.

They are often thought of as scavengers, but their diet depends on their species.

The striped hyena and brown hyena are mainly scavengers, but will eat rodents, eggs, insects and even fruit. The spotted hyena is native to sub-Saharan Africa and hunts in packs for large mammals, such as wildebeest, zebra, kudu and impala. 95% of their diet is made up of animals they hunt. While the aardwolf is an insectivore, and can eat 300,000 termites in a day.

They’re a dying breed of primitive mammals, but they’re smart, they’re organised and altogether more civilised than you might think.

1. There are dog-like and cat-like hyenas

A really long time ago, hyenas split into two groups. One branch evolved to be like dogs, and the other grew to look a bit more like cats, at least in the formation of their jaw. Cats and hyenas both have reduced dentition, so their skulls can be hard to tell apart, at least when they’re not connected to the rest of the hyena.

Almost all of the dog-like hyenas went extinct when real dogs arrived and took up all the niches.

That’s why, out of the 4 species of hyena around today, only one represents that ancient lineage. This one branch is the Aardwolf and might not look like a hyena at first glance, but is the closest living relative of the other three species.

The cat-like hyenas make up the other three, and even they are the remnants of a much larger group of hyena genera that predate most modern mammals. They even look prehistoric! That sloped back is much less common nowadays than it was in the time of the sabre-toothed cat. 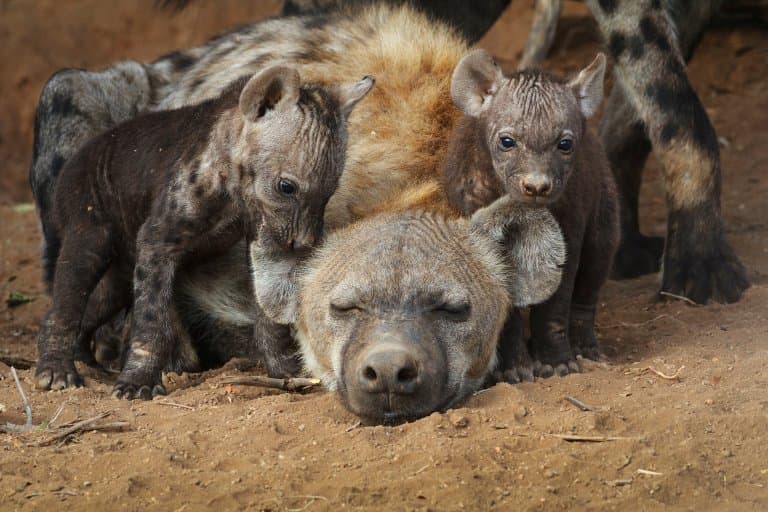 As we mentioned, the dog-like hyenas went one way, and the cat-like hyenas another. The latter developed a useful survival tactic that may have helped them survive: they evolved to crush and eat bone.

The spotted hyena has a bite force of 1,100 psi, which is more powerful than lions and tigers.

Along with an immense bite force, the cat-like hyenas adapted their stomach acid and gut flora to digest almost everything in an animal carcass. That allowed them to eat long-dead meat, leftover from other hunters like lions. And with huge crests of bone on their skulls to provide surface area for the powerful muscle structure of the jaw, hyenas were able to chew bones to pieces.

In fact, cat-like hyenas are known as bone crushers. 1 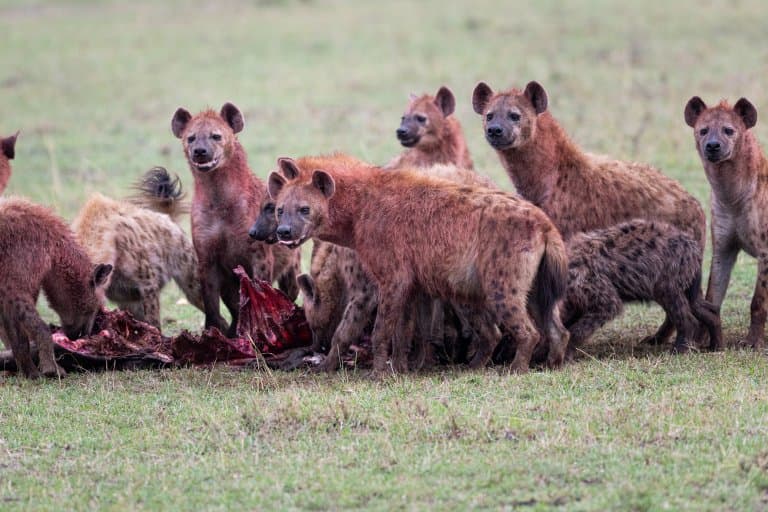 3. There was once a 200kg hyena that could crush elephant bones

One of these hyenas was an absolute monster. Pachycrocuta brevirostris, a giant hyena, and the largest bone-crusher ever known, evolved alongside early humans, and competed for the same food source.

This now-extinct member of the hyena family was heavy and slow, more cumbersome than its modern relatives, and is thought to have been a pure scavenger. 2

4. Their poo is white

Because of their incredible ability to digest basically everything, all that’s left in their waste is the calcium from all the bone they eat.

This means their dung comes out white and is distinctly recognisable from other mammalian poop.

5. They eat donkeys for lent

In Ethiopia, there are populations of hyenas living in very close quarters with people. In fact, you can see hyenas in the city at night, looking for scraps. In urban areas, they get a lot of their food from the waste of butcher’s shops and slaughterhouses. Except, that is, during religious holidays.

Most Ethiopians give up animal products during religious holidays, and this drop in meat production forces hyenas to move to more readily-available food sources, like any number of the abandoned horses and donkeys that are left on the streets. 3

6. They are phenomenal predators

While most people think of hyenas as lowly scavengers, stealing their meals from more glamorous predators, it’s not all that true.

Hyenas are most active at night, which, as you probably know, is when most humans are asleep. And even if they’re awake, they can’t see very well in the dark. This incompatibility has plagued researchers since the dawn of animal behaviour studies, and as such has led to a lot of false information about nocturnal animals based on sleepy researchers’ assumptions.

With the advent of night-vision cameras, people have finally been able to stay up late and watch what these animals are doing, and the results are surprising. At least half of a hyena’s food comes from hunting. Probably a lot more, considering the aforementioned bias of researchers towards sleep.

So, it turns out hyenas are excellent predators, and this means they’re well adapted to survive long after the obligate predators leave. 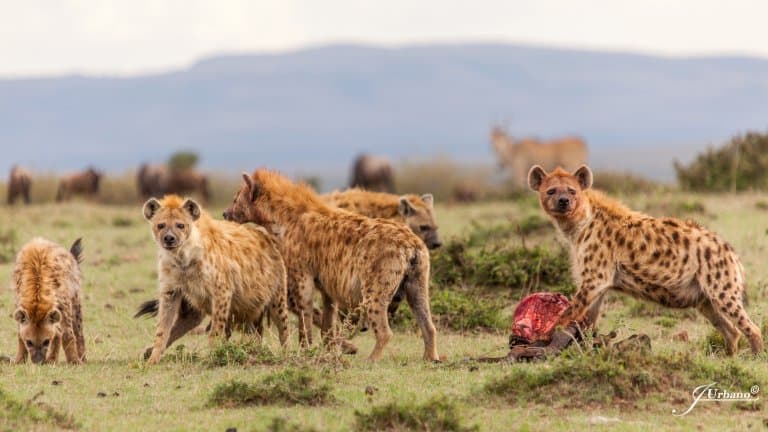 Hyena hierarchy begins with the top female. From there, her daughters are next in line, followed by her sons. Then, her daughters’ daughters, and so on.

It’s quite complicated, and relatively unusual for mammals to have such powerful females at the head. One of the reasons they can manage it relates to certain chemicals in their bodies.

8. Spotted hyenas are jumped up on steroids

Female spotted hyenas are thought to have exceptionally high testosterone levels, though not necessarily much different than the males.

Androstenedione, however, is a precursor to testosterone, and these steroids are commonly found in much higher quantities in female hyenas, perhaps accounting for their, uh, weird genitals, among other things.

9. The spotted hyena will laugh and giggle

They will make various vocalizations, such as laughs, giggles, groans, whoops, grunts, yells, growls and whines.

According to scientists their so-called laughs may convey social status to others in the group, as well as stress when there’s competition or they are going to hunt.

10. The females have a pseudopenis

Another way hyena females maintain dominance over males is with the peculiar adaptation of a pseudopenis. This is essentially an enlarged clitoris that contains the urogenital passages – that is, it’s used for peeing, mating, and giving birth – and cannot physically be accessed without permission. This gives females the upper hand when it comes to sexual selection, which is essentially the currency of mammalian dominance hierarchies.

You might be wondering what kind of guy a testosterone-fuelled, pseudopenis-packing bone crusher would go for. And you might be surprised. Female hyenas typically choose low-ranking males from other clans, as they’re passing through. This is pretty sensible though because it reduces competition and expands genetic diversity.

Hyenas can live in enormous groups. A single clan can reach up to 100 individuals; certainly, a force to be reckoned with, but these clans don’t usually roam together.

They occupy vast territories and usually split off into singles or small groups. 4

12. They have a complex social system

However, hyenas are nothing if not sociable. Their social systems are complex and still poorly understood, but researchers are starting to break down some of their vocalizations to better understand what these animals are capable of.

Contrary to pop culture depictions, hyenas are highly intelligent and emotionally complex. While we don’t yet know exactly what they’re giggling about, we do know that there’s a lot of information being shared in their conversations, and body posture, ear position and tail motion also add to their repertoire. 5

13. Hyenas are as smart as monkeys

The size of an animal’s frontal cortex is thought to be related to its social intelligence, and hyenas have a frontal cortex similar to that of primates.

A study performed by Duke University showed that hyenas problem solving and teamwork was actually better than chimps.

Spotted hyenas and lions in particular are in direct competition, as they occupy the same geographical region and share 70% of the same diet.

While they typically ignore each other, lions can steal kills from hyenas. It’s a common misconception that it’s the other way around!

While hyenas will often leave their kill and keep a safe distance from a lion, the two species can act aggressively towards each other. Lions will often prevail in a fight due to their size and power, however a large hyena is dangerous to a lion – and a group of hyenas can kill a lion!

15. They are usually timid around humans, though are bold at night

On very rare occasions, spotted and striped hyenas have preyed and attacked humans – although in general incidents are quite rare.

There was a pair of man-eating hyenas, responsible for killing 27 people in Mulanje, Malawi in 1962 before being captured and killed.

More recently in 2004 there were a spate of attacks on humans in a 12-month period along a 20-km stretch of road near the Tanzanian border where 35 people were killed.