The Aardwolf is a member of the Hyena family, which also includes the spotted hyena, brown hyena and striped hyena. Their name means “Earth Wolf” in the South African Afrikaans language.

Aardwolves are found only in Africa and have a very specific distribution. Two separate populations exist; one in Southern Africa and the other in East Africa. Unlike other hyenas, they are insectivorous. 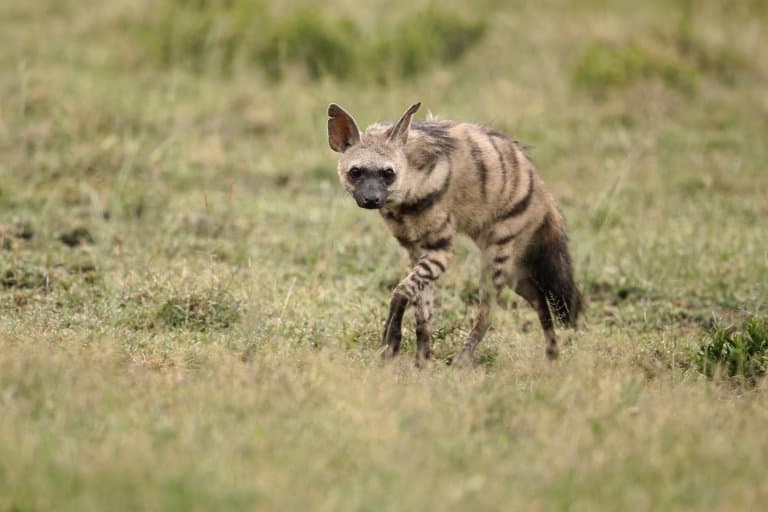 Aardwolves are the smallest of all Hyenas, standing at approximately 45cm tall. They resemble a miniature striped Hyena with a slender build and the typical sloping back of other Hyenas. Their mane and tail are very bushy and their reddish brown colour accentuates the dark stripes on their legs and torso.

Their range is determined by the availability of their food source, namely termites. Aardwolves feed almost entirely on termites and rely completely on the open, savannah grasslands where termite colonies are common.

They are often found in the drier grasslands where antelope and cattle have over-grazed and thus are extremely important in maintaining the ecosystem balance by keeping termite numbers down.

Aardwolves are strictly nocturnal foragers. They spend the day in burrows which have been created by aardvarks and other digging animals. They are considered weak diggers but extend existing burrows to make suitable dens.

At sunset they leave their burrows and quietly forage across the open grasslands for termites. Due to their small size, they try to make as little noise as possible and track the termites by sound. Aardwolves have a particularly well developed sense of hearing and they can hear the sound of termites cutting grass from a long distance away.

Aardwolves primarily forage for harvester termites which are both nocturnal and abundant throughout the different seasons. Once they have located the termites, they use their broad, sticky tongue to lap up the insects off the ground, much like a cat lapping milk. They can eat hundreds of thousands of termites in a single night! Due to the fact that the Aardwolf is so specifically adapted to such a diet, their cheek teeth have been reduced to small pegs to help crush the termites and their canines, though very sharp, are small and thin.

Aardwolves are mainly solitary animals and usually avoid others so as not to attract attention to themselves. They can however be territorial and when fighting or protecting themselves or of their cubs, are known to produce unusually loud barks and growls for a creature of their size. Although males sometimes do fight, resulting in bites and the winner chasing the other away, they do this rarely so as not to alert predators to their whereabouts.

Despite being solitary animals, Aardwolves do form bonds during the breeding season when both the male and female look after their offspring.

The cubs remain in the burrow for 3 months before exploring their surroundings. During this time the male often remains at the den so the female can forage for food. Once the cubs are over one year old, they leave the territory so as not to compete for the same food source.

There is still relatively little known about these extremely interesting animals and despite their abundance in the correct habitat, you would be very lucky to see one in the wild due to their secretive and nocturnal behaviour.

1. They are not related to the aardvarks, or wolves!

Despite the name and similar diet of termites, they are not related to aardvarks or indeed wolves – and as already described, are actually a member of the hyena family. 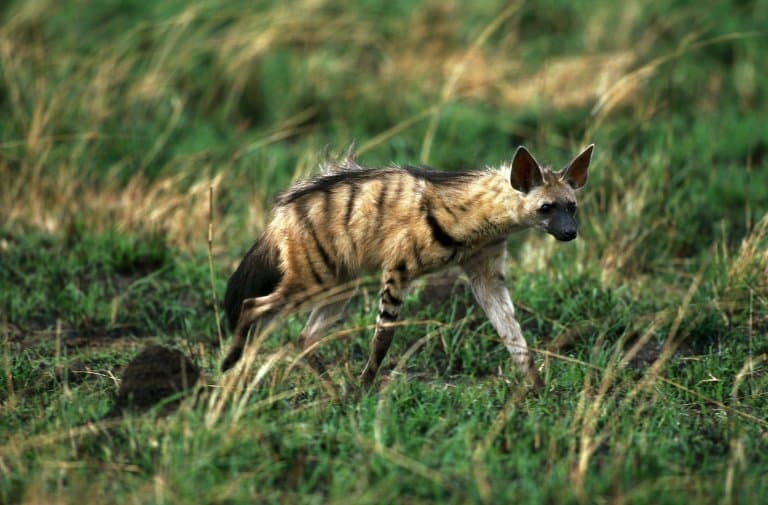 They can produce twice the amount of saliva that a dog of a similar size can, making them very efficient termite hunters.

On average, a density of 3,000 termite mounds are required to sustain a pair of aardwolves. In most arid environments the area needed for such a density varies from 1-4 km².

They are sometimes referred to as the ‘termite-eating hyena’. 1 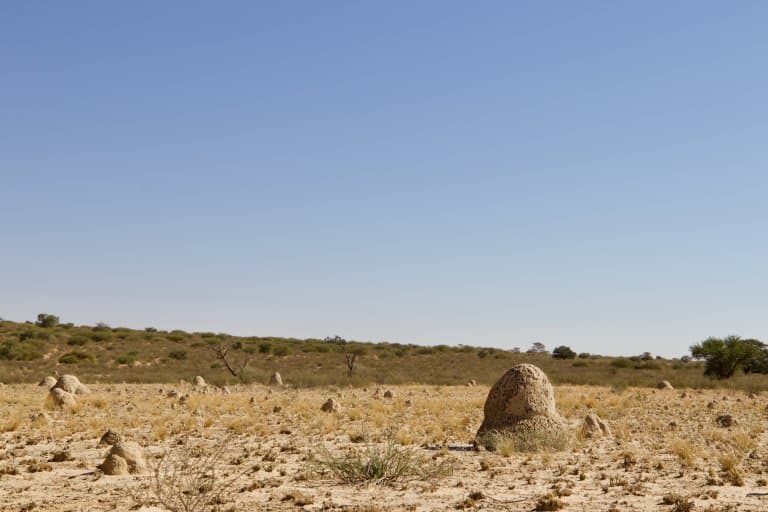 3. They can make themselves appear 70% bigger!

When threatened or cornered, the Aardwolf raises its body high off the ground, its mane and tail bristling so that its silhouette makes it appear up to 70% bigger.

The musky pungent fluid can be enough to scare off a predator, such as a dog.

5. They are specialized to forage for termites

Though termites may be abundant in an Aardwolf’s territory, finding them can be difficult. Aardwolves struggle to forage in the rain as they are unable to hear the sounds the termites produce.

Added to this, soldier termites produce a noxious spray to deter predators. Aardwolves try to avoid the solider termites but seem to be less affected by this spray than other animals.

They have a wide spoon-like tongue, which means they swallow a lot of sand when eating termites, and subsequently this can be seen in their poop!

Despite somewhat resembling a dog-come-fox, the Aardwolf is actually more closely related to cats. 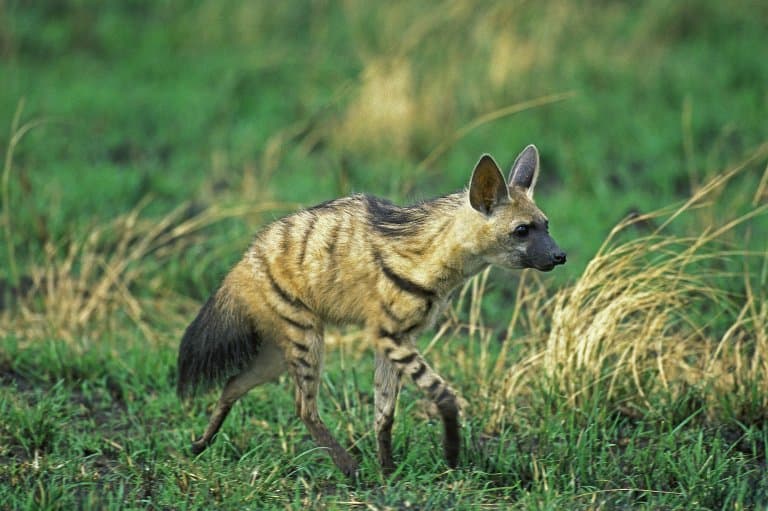 Aardwolves are prolific scent-markers, leaving scent trails through their various trails in their territory.

The smell of an Aardwolf scent-mark has been compared to particularly bad human sweat and there is even a record of a scent-mark smell lasting several years. 2

Aardwolves are very shy and secretive and do not do well in captivity.

If a cub is orphaned before 3 months old, they usually do not survive, however if they do live, they will most likely develop a nervous disorder.

10. They live in multiple burrows

Aardwolves can have up to 10 burrows in a single territory.

The usually stay at one for no longer than a few weeks to avoid predators and rivals locating them. These burrows also act as ‘safe-houses’ when Aardwolves are trying to flee predators. 3

Much like the other Hyenas, Aardwolves have an unusual walking style. This gait allows them to conserve energy when travelling longer distances.

12. They rarely need to drink water

Even though they are found in some of the drier savannah areas, Aardwolves rarely drink water.

They are able to get all the liquid they need from the termites they eat and only when food is in very short supply, have they been known to drink from puddles and streams.

Aardwolves have historically been shot and killed by farmers. This was the result of a common misconception that Aardwolves preyed on livestock.

Of course we now know that they are harmless to livestock.

Some farmers are now leaving termite mounds on their land, as the Aardwolf can keep their numbers low as well as feeding on the seasonal grasshopper nymphs which can destroy crops.