In the jungles and twisted mangrove forests of South and Central America, there’s a majestic, camouflaged hunter. Smaller than a lynx, this cat stalks its prey using incredible night-vision and a strong sense of smell.

This is the ocelot, and its dappled, spotted jungle fur has been the theme of local tribal legends and mythologies for generations. 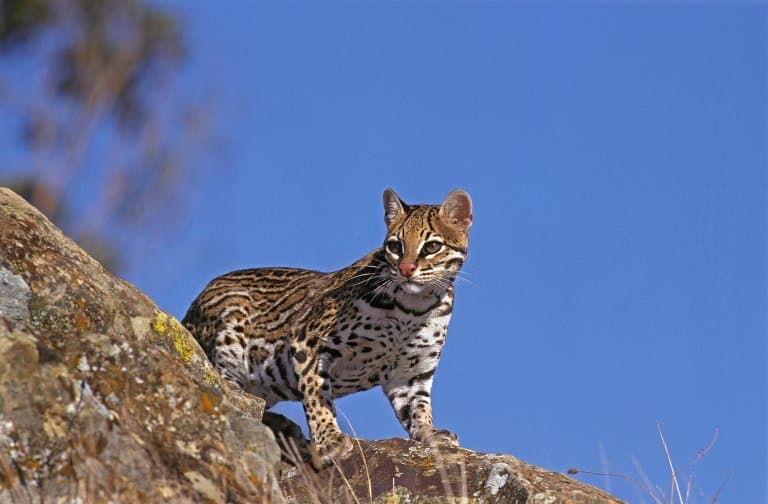 Ocelots are the largest of the small hunting cats of the Americas, and they have a voracious appetite to match. They’ve got some interesting adaptations for jungle living, and do quite well for themselves as long as they have a connected habitat to occupy.

They’re good in wet conditions, can hunt in trees and with their camouflage can disappear into the jungle as if they never existed.

There are generally accepted to be two recognised subspecies of ocelot, L. p. pardalis which has more grey fur and ranges from Texas to Costa Rica, and L. p. mitis which has more traditional yellow fur and occupies the South of America.

Ocelots are medium-sized and sometimes referred to as ‘dwarf leopards’. They are generally around 2 – 4 feet in length with a long tail, and weighing up to around 15kg (34 lb).

Ocelots tend to be solitary and territorial and will hunt at night. They prey on small mammals, such as armadillos, opossums, fish, reptiles, birds and even monkeys.

While their populations have been wiped out everywhere North of Texas, groups are hurriedly trying to solve their conservation issues in the US and further South the Ocelot populations are mostly thriving.

The average daily intake for an ocelot is up to around 800g! That’s around 7% of its body weight in meat, every day! This food is made up of a number of animals, mostly vertebrates, and is usually acquired fresh from an ambush attack from above, much like the way a mountain lion hunts. 1 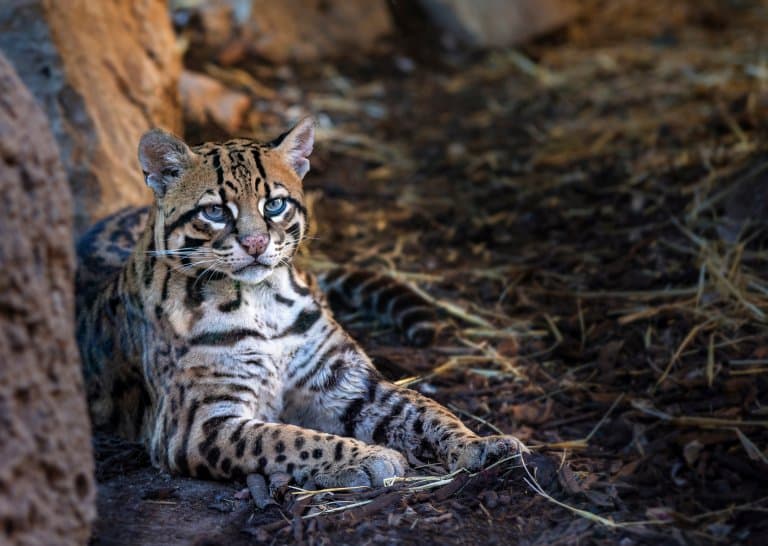 While this number is impressive, and there are no signs that the global population is threatened, there are certain local populations that are struggling.

In Texas it’s estimated that there are only about 60 individuals. Their dependency on dense undergrowth for camouflage makes them vulnerable to human development.

Roads, deforestation and the subsequent scarcity of food are all modern threats to US populations of Ocelot.

3. They’re traditionally hunted for their fur

Because the ocelot’s fur is so beautiful, it has been used for clothing; something which has contributed heavily to the ocelot’s demise in regions as far North as Arkansas.

Wealthy people would spend thousands on a coat made from the fur of more than 13 of these beautiful cats.

Ocelot hunting is now banned worldwide, and the trading of fur is protected under CITES.

An ocelot is about twice the size of a house cat. Anyone who’s ever been in a physical altercation with the latter might not be surprised that an ocelot can take down a small monkey. In fact, in some populations in Brazil, primates represented a quarter of an ocelot’s diet.

Even for an ocelot, a monkey is no small feat, and the bird bones found in their feces suggest that these cats are incredible arboreal predators. These cats are so elusive, however, that very little of their behaviour has ever been documented on camera or seen live. 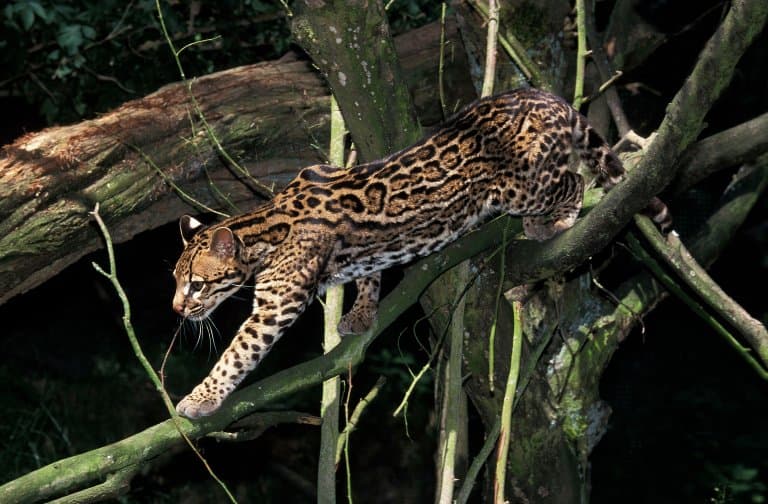 5. Each ocelot has a unique color and rosette pattern coat

They are marked with solid black rosettes on their creamy, yellow fur and no two ocelots have the same markings. Their unique patterns can be used to identify individuals.

Unlike many cats, ocelots are very comfortable in the water.

They’ll regularly travel down rivers and even hunt fish on occasion. Ocelot habitats include mangrove swamps, so they’re very happy to wade through water!

Lions and ocelots have some unusual adaptations in their front feet. It’s thought that lions retain a form of primitive morphology or their toes that was developed in tree-dwelling ancestors and has helped them in hunting large prey.

While ocelots also retain these characteristics, it’s thought that they have adapted even further as tree specialists with particular modifications to these ancient characteristics. 2

8. They are easily confused with margay and the oncilla

While they are all in the same family, the ocelot is noticably larger and heavier than both of these species. The ocelot also has a shorter tail.

9. Landowners are the key to ocelot conservation

Habitat fragmentation is the term used to describe the breakup of an animal’s home range into clusters of isolated areas. Farming, roads and urban development all contribute to this phenomenon, and without physical bridges of land between habitats, populations can be partitioned and genetic quality degrades over time.

With fragmented populations, the number of individuals tells a misleading story: you may have thousands of animals, but if they can’t reach one another to mate, they will not be safe from extinction.

When comparing ocelot recovery strategies, it was found that restoration of these habitats was the most effective method, followed by the linkage of fragmented habitats. Both of these solutions require help from private landowners who commonly occupy the space between habitats. 3 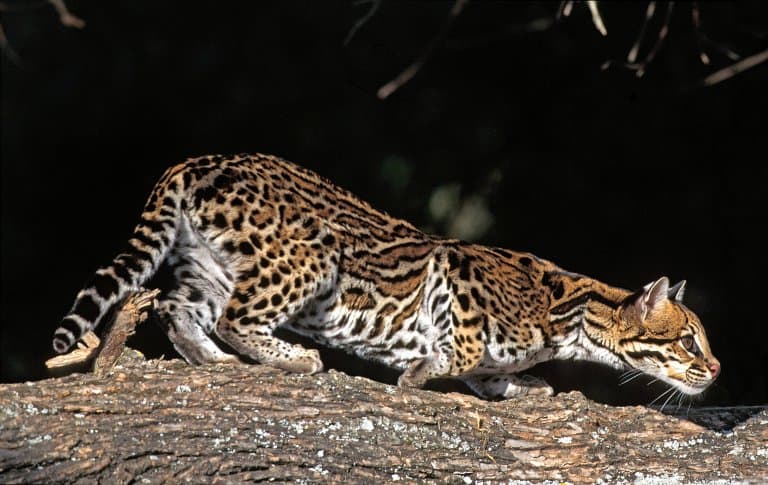 10. Vehicle collisions are another serious threat

The Texas populations of ocelots are shrinking and conservationists such as those in the Caesar Kleberg Institute have been scrambling to identify where and how to implement protective measures at roadsides to reduce collisions.

While this work is ongoing, it has already resulted in some incredible high-quality footage of ocelots in their natural habitat and continues to provide data on their movements and behaviour.

11. Ocelots were revered as gods

In the ancient tribal legends of the Aztecs, the ocelots were represented in the stars. The constellation we know as Ursa Major, or the Great Bear, took the form of an ocelot, and the god of that constellation and of the sky itself was known as Tezcatlipoca.

Tezcatlipoca was commonly depicted in the form of an ocelot or a jaguar, and it was said that when someone dies, their soul is led to the gods via an assistant wearing ocelot skin. 4