The margay is an elusive wild cat that spends the majority of its time in the trees of Central and South America.

It is a small cat that is very similar in appearance to the ocelot. On its body, it has markings similar to a panther, and its large eyes help it effectively track down prey. 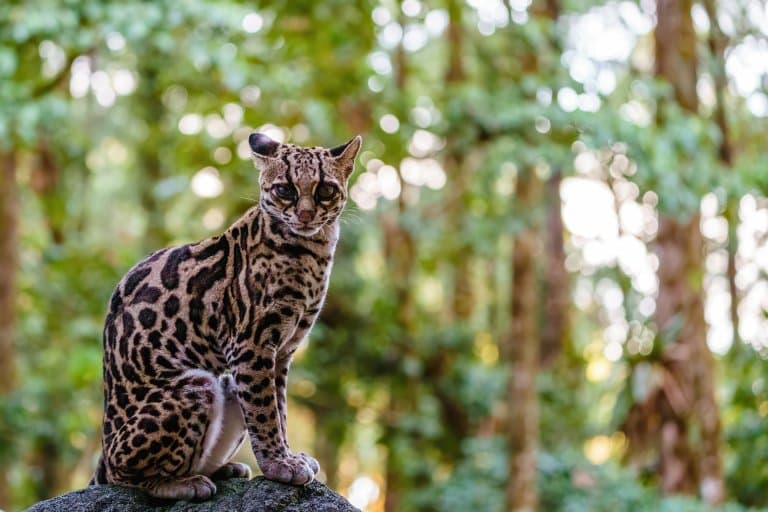 Margay live in the tropical lowlands and dense forests of Mexico, Brazil, Paraguay, as well as southern Uruguay and Northern Argentina.

The margay was first described almost 200 years ago, but much remains unknown about these mysterious felines. It is presumed to be nocturnal and conduct most of its hunting at night, thus, making human encounters sparse and rare.

They are known as small cats, but are larger than domesticated cats at home and are on average between 1.5 to 2.5 feet in length. They have giant ‘puss in boots’ eyes!

They diet on small mammals including monkeys, tamarin, sloth, reptiles, birds, and even eggs and fruit. They are not picky eaters and a study in 2007 showed 19 different types of food were consumed by margay.

They are skillful hunters and spend much of their time in trees. They are sometimes called the ‘tree ocelot’, and have been witnessed leaping through the treetops chasing prey, such as tamarin.

In the 1980s, margays were categorized as a vulnerable species and it was until the 1990s that they were hunted illegally for the wildlife trade, particuarly for their coats for clothing. Currently, they are classified by the IUCN as near threatened, due to the destruction of habitats for agriculture and human development projects.

1. They can run down trees headfirst

Their strong paws and slender bodies allow margays to run down trees headfirst.

This allows them to both move more quickly from tree to tree and see the forest ground below them in preparation for surrounding predators. 1

2. They belong to the same family of cats that cougars do

It may be surprising to know that margays, which weigh less than 10 pounds, share the same family as cougars that can weigh almost 200 pounds.

Taxonomically, they both belong to the Felidae family, otherwise known as “small cats”. 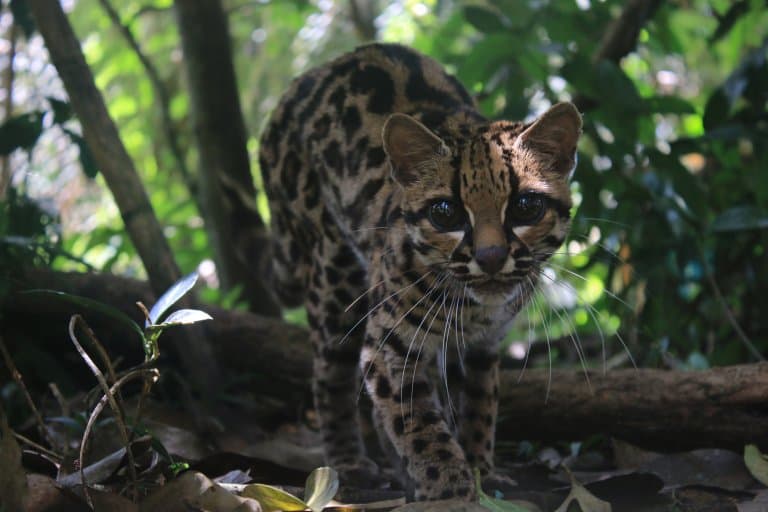 The margay is in the same genus as the larger ocelot, and the smaller oncilla. Ocelots are known as mini cougars, while margays are sometimes thought of as mini ocelots!

3. They may be able to mimic the sounds of their prey

The observations of a recent study in the Amazonian forests suggest that margays may be able to mimic the sounds of small monkeys as a hunting strategy.

Nearby monkeys were attracted to the mimicked vocalization, after which, a waiting margay attempted to make an attack. 2

4. Their long tails and unique ankles help them navigate the trees with ease

Relative to their bodies, the tail of a margay is long. They use these long tails as counterweights for stability and balance high up in the forest trees.

Moreover, they have ankles that can rotate a full 180 degrees! 3 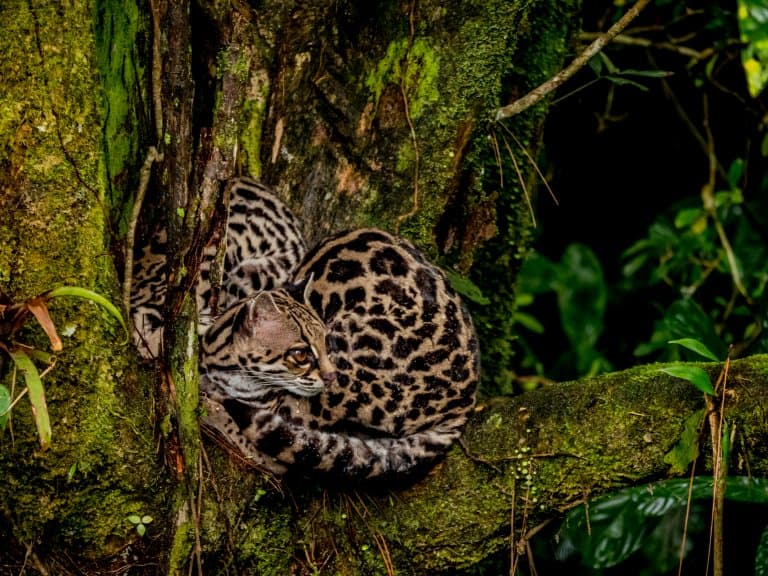 5. The population density of margays is quite low

Depending on the region, the general population densities of margays range between 1-5 animals per 100 km2.

There are very few areas where the densities surpass 20 cats per 100 km2. 4

6. Margays are influenced by the “ocelot effect”

Because ocelots are larger and more adaptable, margays will often refrain from living in areas where ocelots reside.

This pattern of avoidance is termed the “ocelot effect”, and margays are left with habitats that are less protected with scarcer food sources.

7. They are not social animals

Aside from coming together to mate, margays prefer to live relatively solitary lives.

After mating, males leave before the birth of their young and they do not assist in any rearing.

After a gestation period of approximately three months, a female will give birth to her kittens.

Kittens require approximately a year to reach their adult size and two to three years before reaching sexual maturity. 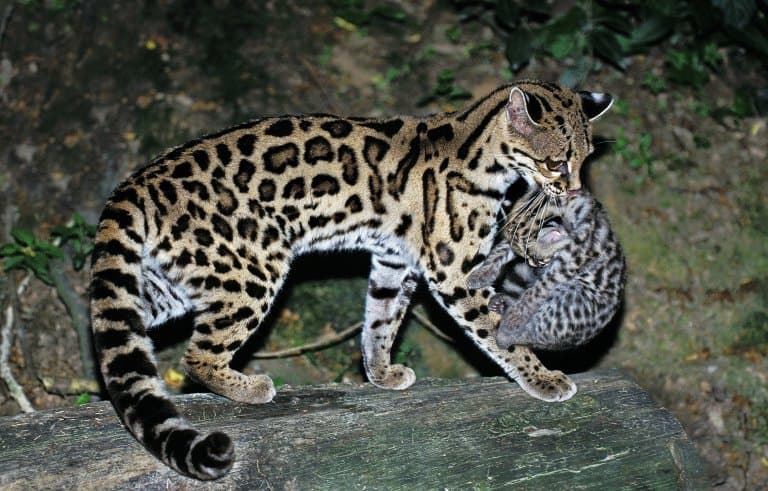 They do not tend to stalk their prey. Rather, they will stay in one spot and wait for the best moment to strike vulnerable prey.

10. They already have spots when they are born

The characteristic leopard-like spots of margays are found on the fur of newborns. The centers of these spots are slightly darker than their surrounding fur.

When a female is in heat, they will make a groaning sound to inform surrounding males of their reproductive status.

Upon hearing this, males will emit a high-frequency trill and rapidly shake their heads to catch the attention of the female.

12. They may have once been spotted in extremely southern parts of the United States

It remains uncertain as to whether there are margay populations in the United States today. They were once reported in the 1850s in Texas, but are now considered to be extinct in the area. 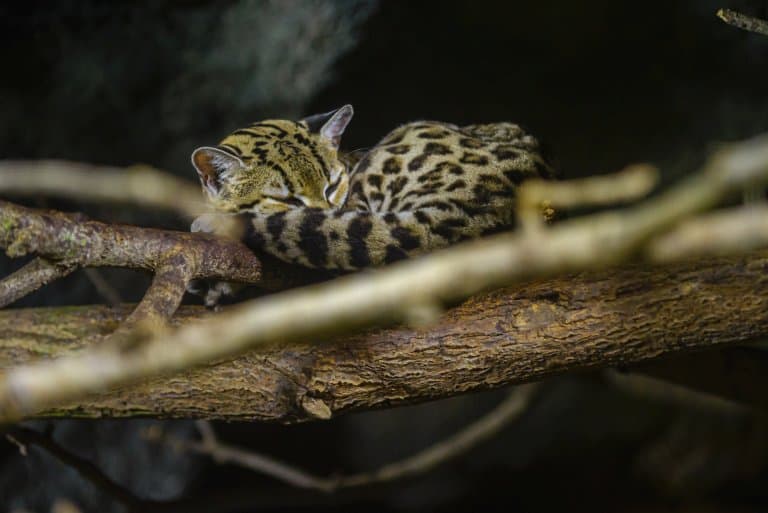 13. Cubs have a 50% mortality rate in captivity

Sadly margay do not reproduce well in captivity, with only 50% of kittens surviving the first two years. Breeding programs therefore are not helpful in reducing population decline.

14. Sadly margay populations are predicted to decline by 30%

Over the next three generations (18 years) according to the IUCN, which means they are classified as near threatened. This is largely is largely due to its habitat being destroyed and converted by humans for agriculture, pasture and infrastructure.