The giant anteater is one of the most unique mammals in the world. It’s medium-sized and insectivorous, and recognisable for its elongated snout, bushy tail and long sticky tongue.

They are found in the grasslands and rainforests of Central and South America. Most live in Brazil, but they can be found in areas surrounding Brazil, and into Panama. 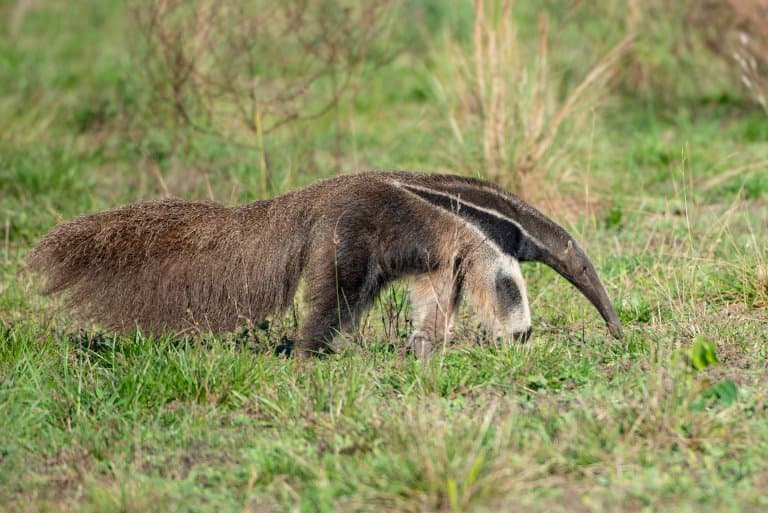 The giant anteater is one of 4 species of anteaters and the largest member, measuring between 6-7 feet in length, and weighing between 27-50kg.

They are mostly nocturnal and solitary creatures, except when breeding and mothers bringing up their young. Anteaters will mark trees with urine to advertise their presence.

Giant anteaters spend much of their time foraging for food, and they like to diet on termites and ants, using its fore claws to dig and its long sticky tongue to slurp them up.

Believe it or not but anteaters are actually quite similar to pigs. As a result, when it comes to their names, you may find that they’re familiar! A male anteater is called a boar, while a female is known as a sow. However, young anteaters put a spin on that pattern, with them being referred to as pups.

As of right now, the giant anteater is considered a vulnerable species. Surprisingly, despite their large size, one of the most common sources of population decline comes from car collisions. They also suffer from habitat loss, pollution and poaching for their fur and bushmeat. 1

1. It’s the largest type of anteater

There’s actually a lot of truth to the giant anteater’s name.

However, compared to those other three, the giant anteater is by some distance the largest! 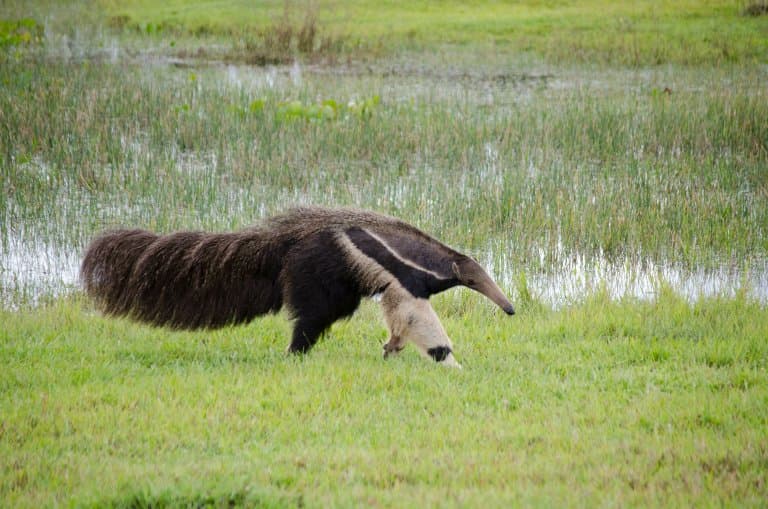 2. It is the only living species in the genus Myrmecophaga

Although there are other species of anteaters, they aren’t as closely related as you’d think.

Typically, related species are all in the same genus. Some are even in the same species! However, that isn’t the case with the giant anteater.

The giant anteater is the only living member of the genus Myrmecophaga. Other anteaters, however, do share an order with the giant anteater, with all species being in the Pilosa order – which includes sloths.

4. They can flick their tongue in and out of their mouths 160 times p/m

Incredibly this is nearly three times per second!

Their tongues can measure up to 2-feet in length, covered in sticky saliva and used to slurp up termites and ants. When feeding, giant anteaters swallow almost continuously.

The giant anteater got its scientific name ‘Myrmecophaga Tridactyla’ from Carl Linnaeus in 1758.

Despite ‘tridactyla’ meaning three fingers, it has five toes on each foot! They resemble a bears, with long, sharp claws.

They visit up to 200 termite or ants nests a day and spend on average around a minute feeding, before moving on to the next nest. 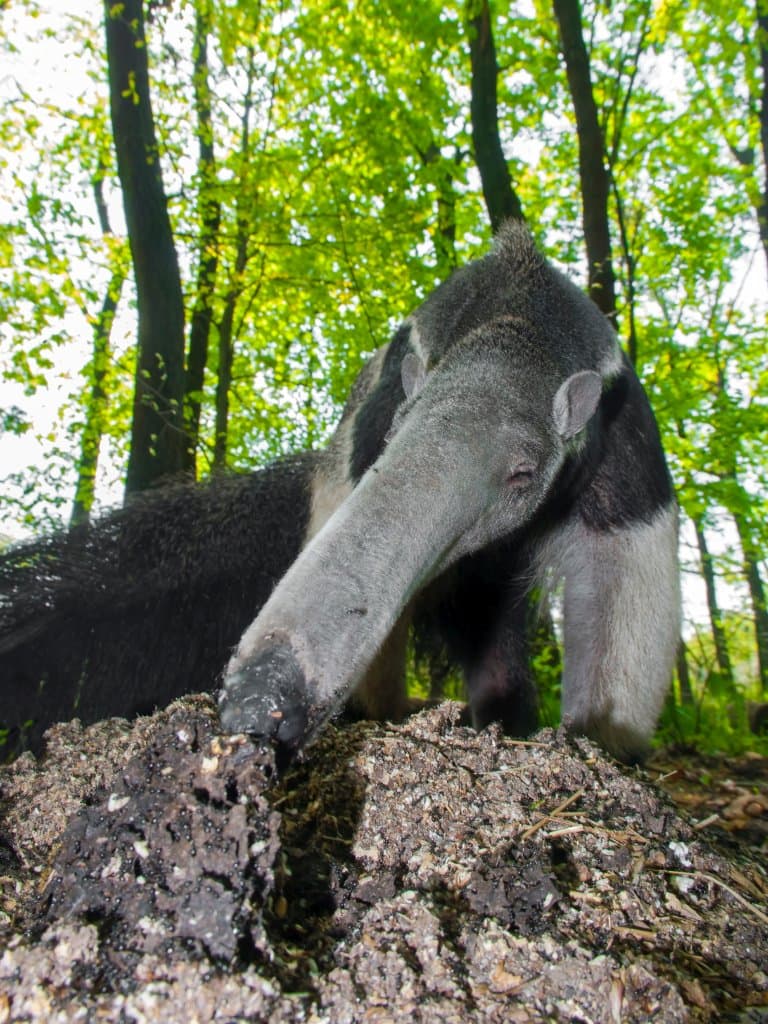 6. They carry their offspring on their back

Usually, a mother will only give birth to a single baby. From there, she’ll feed them for up to six months, though she’ll carry her baby on her back for much longer – sometimes up to a year! 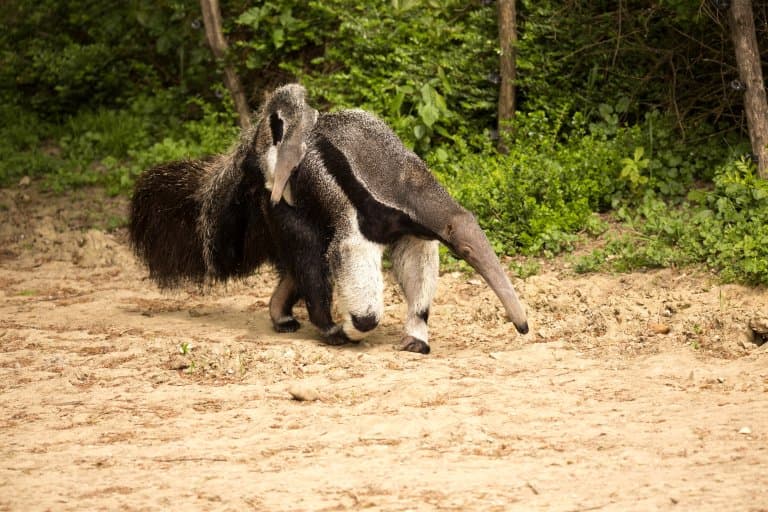 7. Giant anteaters can be aggressive when needed

As insectivores, giant anteaters aren’t interested in hunting large prey, especially mammals. However, they can be aggressive – and downright dangerous – when needed.

This includes when they are scared or otherwise feels threatened. They will typically flee predators, but their front claws are formidable weapons and capable of injuring and killing jaguars and pumas.

While generally shy, there have even be reports and cases of giant anteaters causing fatal injuries when attacking hunters. 2

8. Its sense of smell is 40 times more powerful than a human’s

When you first think of an anteater, there’s probably one thing you think of first: their giant snout!

While their elongated snout and tongue are actually designed in such a way to help them reach and eat their favorite types of prey, the giant anteater also has a strong sense of smell.

In fact, their sense of smell is up to 40 times stronger than a human’s! This is particularly helpful, as it’s thought they don’t have great eyesight. 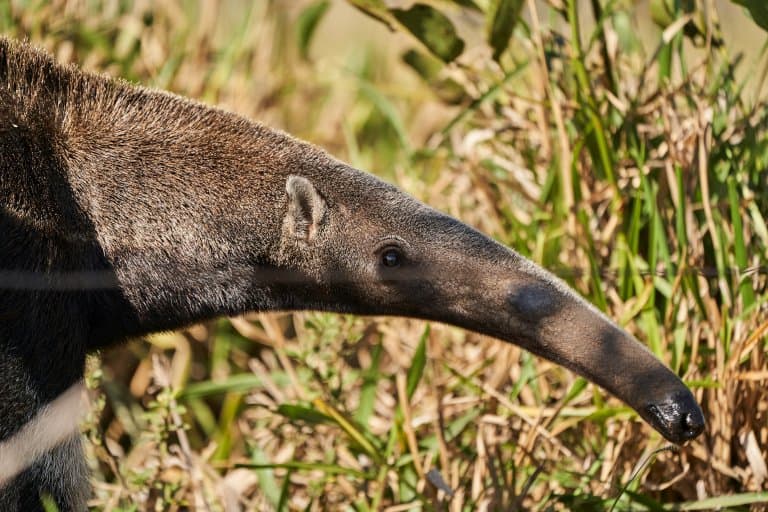 9. What they eat can depend on where they are located

Ants and termites aren’t always found in the same places. As a result, while the giant anteater is known to eat both, they might not always.

In some areas, ants are more abundant, which means that they make up a larger portion of the giant anteater’s diet. In other places, it’s termites. 3

One of the ways that giant anteaters are able to hunt their prey is with their large claws. However, while claws can be a great tool for digging into ant and termite mounds, it can make walking difficult.

As a result, they walk on their knuckles instead. This means that they can look a lot like chimpanzees or gorillas.

Outside of their nose, the giant anteater also has another very notable feature: their large, furry tails.

When they sleep, they drape their tails over their body, helping to conserve their heat when the temperatures drop.

From movies to books to ancient myths and stories, giant anteaters know how to make an appearance.

They’re an important part of many Indigenous cultures in Central and South America, and, as a result, there are many tales and teachings surrounding them.