Imagine the face of a spider, the crushing limbs of a scorpion and a thin whip-like tail.

Vinegaroons are an ancient amalgam of various arachnid bits and pieces that have been doing what they do since long before dinosaurs had their time in the sun.

While pretty terrifying to look at, they’re actually harmless to humans, aside from a strong-smelling acid spray from their back ends. 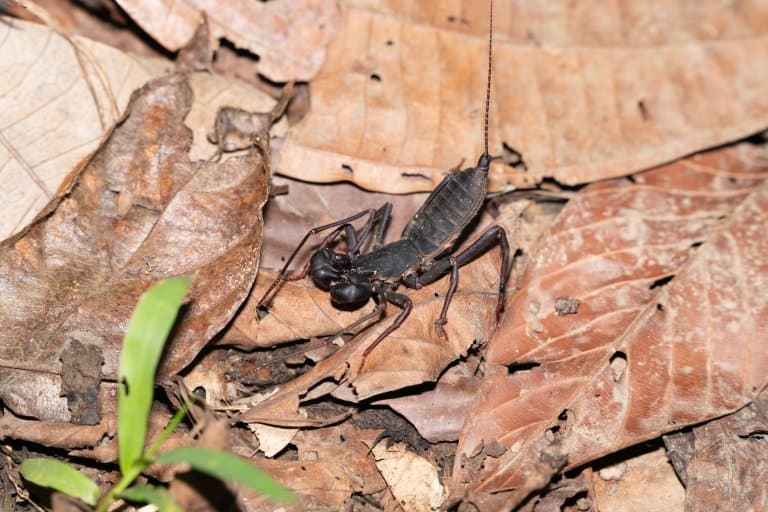 Of course, when these were being handed out, they were deemed too scary for Europe and too harmless for Australians. As such, they exist almost everywhere else instead, mostly in tropical and sub tropical areas of Asia, South and Central America.

They range from 1 – 3.3 inches in body length, but can appear larger, due to their front pedipalps (those pincer appendages in front of the face), legs and whip-like tail. While they have 8 legs, only 6 of them are used for walking, the front two are used a bit like a sensory-antennae.

They like to burrow under logs, and rocks and will also dig their own burrows where they transport their prey to feed. They are nocturnal, carnivorous and like to diet on insects, scorpions, millipedes and worms.

While they can spray an interesting chemical, it’s not much harm to people, and they’re actually helpful at keeping cockroaches, and other pests under control.

These are some very ancient animals with a few cool adaptations that make them fascinating.

1. They are not scorpions

Despite its name, the vinegaroon also known as the ‘whip scorpion’ is not actually a scorpion, or a spider. It’s an arachnid and resembles a cross between the two. 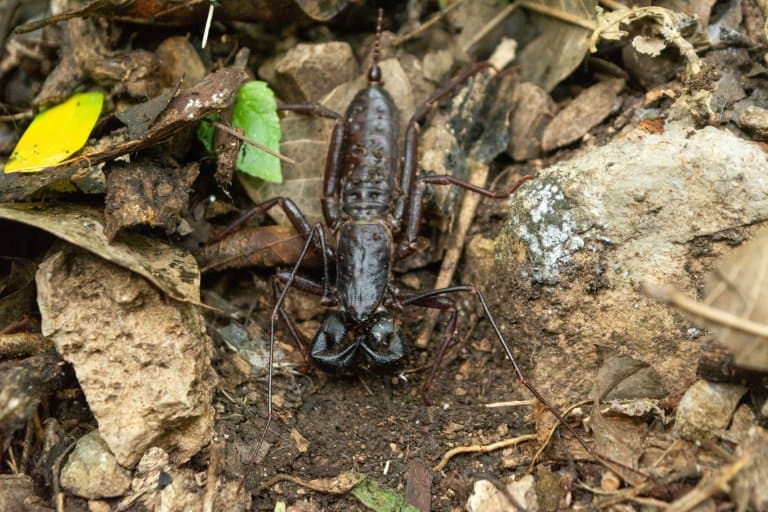 2. They spray acid from their butts

The name vinegarroon comes from their ability to spray concentrated acetic vinegar-smelling acid from their rears.

While numerous animals produce unpleasant material from that part of their body, the vinegaroon is unique in just how concentrated this acid is.

The resulting chemical is 15 times as concentrated as vinegar and can fill the surrounding area with a pungent deterrent. They can aim this spray, too, creating a directional shot of acid towards the face of an attacker.

The glands responsible, known as pygidial glands, have enough for about five of these toxic shots before they need refilling. 1

3. Despite having lots of eyes, they can’t see so well

Vinegaroons have eight eyes, split into three clusters on their heads. While these eyes do detect light, like most arachnids, they have pretty low acuity and instead rely on those long tails for navigation.

The front, or medial, eyes have lenses to project an image, and the lateral eyes seem to only be there for motion or light detection.

Their tails, and long legs, are covered in sensory hairs that help them pick up on the motion of the air and the smells around them and move around in the dark without bumping into things.

So, while the tail looks scary and gives them the name whip scorpions, it’s neither a whip nor a stinger. It’s much more analogous to a nose.

This tail can even regenerate if it’s broken and will usually be replaced by the next moult. 2

With limited eyesight and a keen sense of motion detection, these animals are suited for ambushing prey at night.

While roaming the darkness, they’ll attack anything that triggers these senses, crushing it between specialised leg segments like pincers and feeding it towards their mouths. 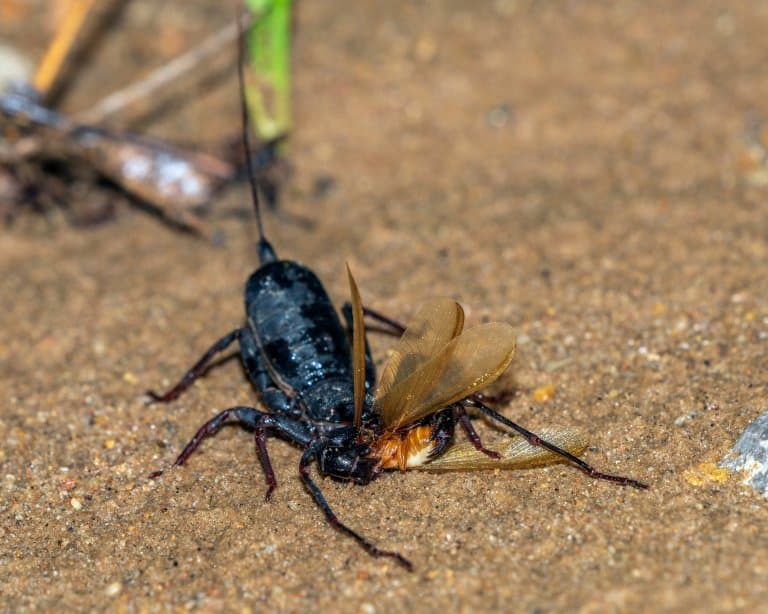 These are animals who have been found in fossils dating back over 350 million years ago.

They’ve remained relatively unchanged, which explains why they look so weird by modern standards and are somehow still relatively unexplored by scientists.

One of the reasons they’ve lasted this long is their ability to hide. They don’t come out at all in the daytime, and very seldom before it’s totally dark.

They’re also very black, don’t glow under UV light (like their close relatives and namesake the scorpions), and aren’t remotely attracted to light. So, most people never see them, which based upon their looks many will be thankful for!

6. They have flexible growth

One cool adaptation that helps them survive is a plasticity in instar-length.

Instars are the stages of growth in moulting invertebrates and usually, these stages are biologically set to a specific time limit.

In whip scorpions, this is more flexible.

Moulting is a dangerous, time-consuming and costly event, and many animals don’t survive it. Being able to delay a moult until they have enough food is a significant advantage over being forced to moult before they’re equipped for it.

Living in the desert, this provides a great benefit when food becomes scarce.

Despite their elusiveness, these animals seem to have a significant role in the ecosystem.

It’s estimated that in Arizona, there are roughly 60,000 of them per square kilometre, providing substantial suppression forces on invertebrate numbers in the area. 3 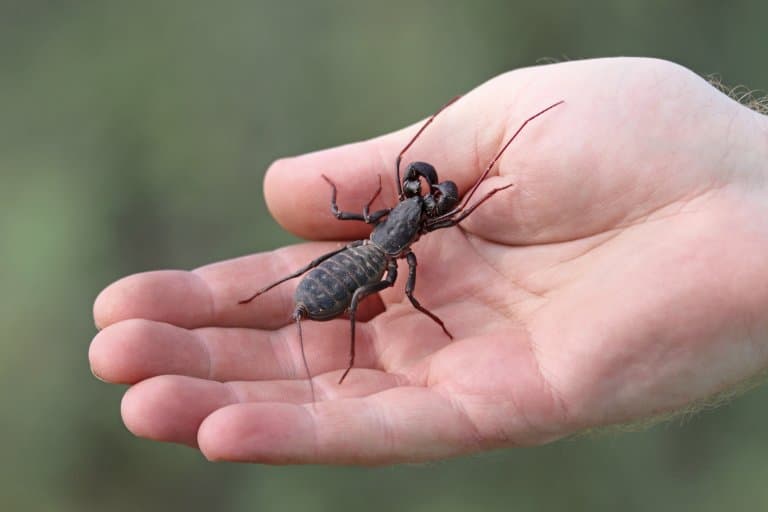 8. Mating is dangerous and complicated

The mating ritual of the vinegarroon is an exhausting procedure, and potentially lethal. It can last over 13 hours!

There are four stages: chasing/grappling, dancing, generation, and pressing. While generally a sex selection from the female side, males too will reject a particularly lethargic female, and so to find out how suitable their mates are, they fight.

There’s pushing, lifting, and wrestling that can go on for hours. If the two decide they’re a match, this stage is surpassed by a dance, in which the female will allow the male to lead her by her first two, sensory legs. They will then dance for about three hours before moving on to phase 3. Generation takes up to six hours and is the process by which they align their respective appendages for the exchange of sperm.

The final stage, pressing, can take up to seven more hours, by which time both individuals are so bored they break off and go their separate ways. Though the fights can be vigorous, neither is usually harmed, and nobody gets eaten during the procedure, which is nice.

9. The mother carries her eggs underneath her belly until hatching

When the young hatch, they sucker onto the mother’s back where she feeds them until their first moult, which can take a month. There can be around 50 young in each litter. 4

Any babies that cannot remain on the mother’s back, or can’t fend for themselves after this initial period will not survive. 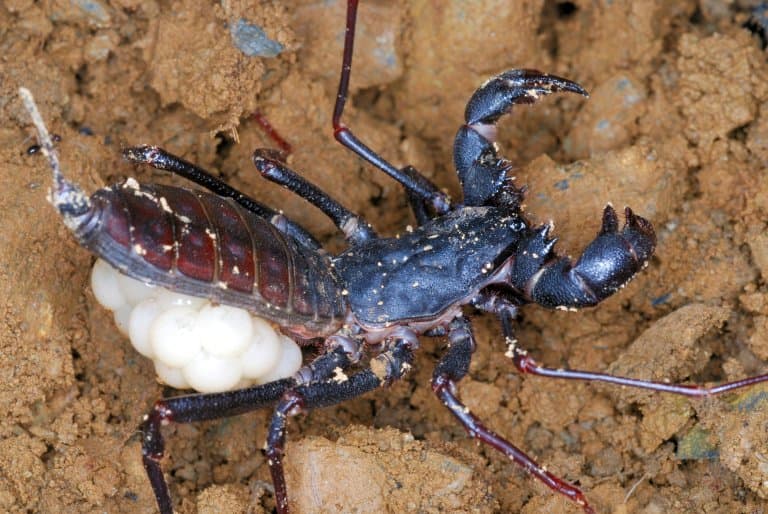 10. They are not tailess whip scorpions

While vaguely similar in appearance, a close relative and also quite terrifying tailess whip scorpions are in a different taxonomy order, known as ‘Amblypygi’ – and are not true whip scorpions.

While harmless to humans, they have been witnessed feeding on a hummingbird before! 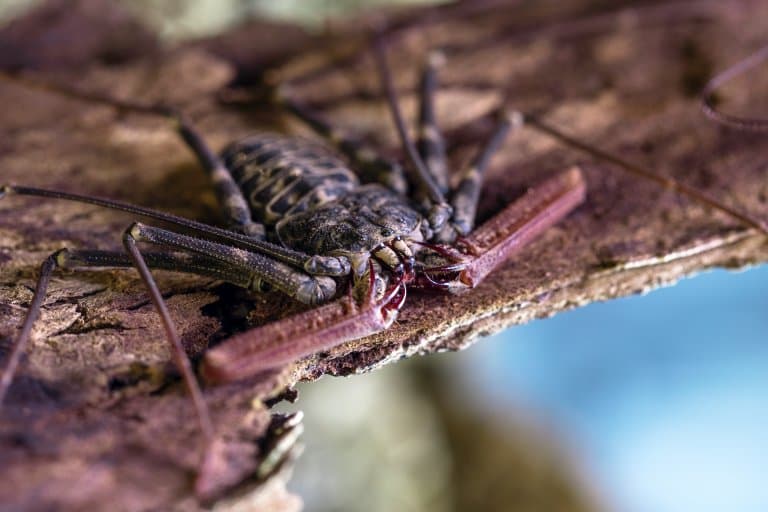