Scorpions are arachnids and close relatives of another familiar eight-legged animal, the spider. They are known for having poisonous tails with stingers, lobster-like bodies, and intimidating pincers.

There are over 2,500 species of scorpion across 22 families and they are found on almost every continent and inhabit a host of different habitats, including rainforests and deserts. 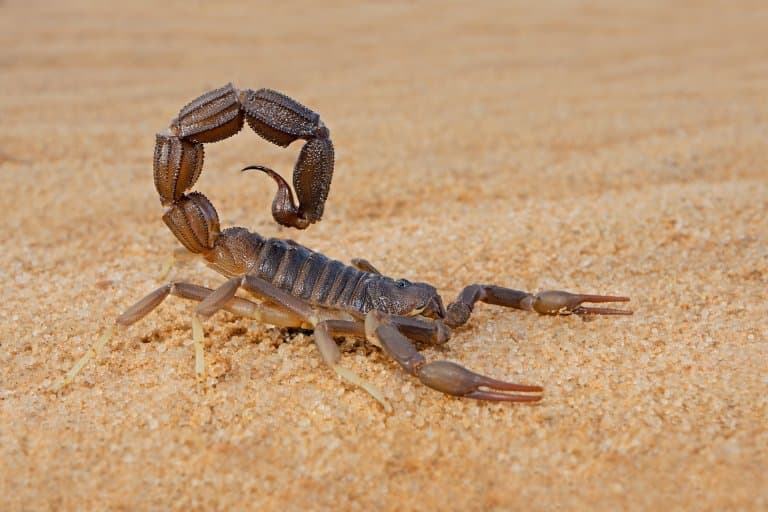 Most scorpions prefer arid climates, but they can survive in temperatures ranging from sub-freezing to blazing heat. They range in size from a quarter of an inch, to around 9 inches in length.

Most scorpion species are nocturnal, and sleep during the day in burrows, rock cracks and tree bark.

In general, the diets of scorpions consist largely of local insects and sometimes small lizards, snakes and mammals. However, some species have been observed consuming members of their own species or other scorpion species.

The conservation status of all species has not been determined yet, but there are some species known to be at risk of extinction. For example, the Seychelles forest scorpion (Afrolychas braueri) is categorized by the IUCN as a critically endangered species as it is only found in a small area on an island heavily impacted by an invasive plant.

1. Despite their appearance, scorpions are not insects

Scorpions are arachnids, a group of invertebrate animals that includes spiders, ticks, and mites. Practically all arachnids have eight legs, whereas insects typically have six. 1

The word scorpion is derived from the Latin scorpio, which comes from the Greek word ‘skorpíos’, which means to cut.

3. They are ancient creatures that have been around since the dinosaurs

Based on fossils and dating records, scorpions have been roaming the planet for hundreds of millions of years.

Their appearance may not have changed much but their size definitely has. It is believed that early ancestors were almost double in size.

4. Few are deadly enough to kill a human

Although there have been almost 2,500 species of scorpions discovered, only around 25 have venom lethal enough to kill an adult human.

Unfortunately this can happen frequently in parts of the world where they live, as it’s often where access to medical treatment is difficult.

5. Around 1.5m people are stung by scorpions every year

Fortunately the number of deaths are low, with approx. 2,600 deaths each year.

Mexico is one of the most affected countries with 300,000 strings and 300 deaths every year. 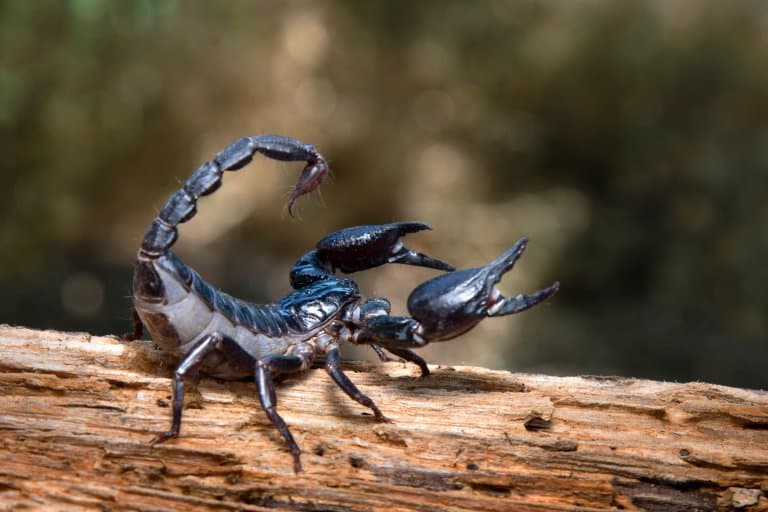 There are minor visual appearances between the two sexes. Males tend to be slimmer and possess longer tails than their female counterparts. 2

7. Metabolic strategies help them cope when food sources are limited

When food is scarce, certain species slow their metabolisms down.

Some are so effective at this technique that they can survive on a single insect each year!

8. Some scorpions communicate by rubbing their legs together

Similar to crickets, scorpions can rub parts of their body together to make sounds. These sounds are often employed as a warning to other scorpions. 3

9. They have special sensors under their belly that allow them to sense vibrations

Scorpions have special hair-like structures on their abdomen called pectines; they serve as sensory structures and are used by males to seek potential mates.

10. They save their venom for select occasions

Producing venom costs scorpions a large amount of energy. This is why most will save their venom and avoid using their stingers unless they feel threatened or if they need to take down prey.

11. Prey are paralyzed and emulsified prior to being consumed

Scorpions inject their prey with enzymes that dissolve them from the inside out. Once the prey’s insides have been liquified, the scorpion will eagerly slurp them up. 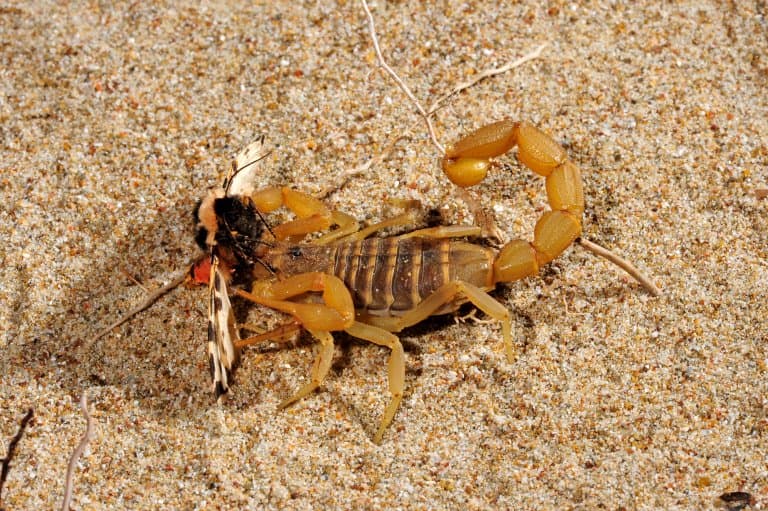 12. Some scorpion species can squirt venom over 1m

Parabuthus, Centruroides margaritatus, and Hadrurus arizonensis species are able to squirt venom in a narrow jet, that can warn off predators – particularly if it gets them in the eyes!

13. Meercats are specialized in hunting them

They target scorpions by biting off their stingers and being mostly immune to their venom.

Meercats are not their only predators though, scorpions will also be targeted by frogs, lizards, mice, birds, bats and snakes! 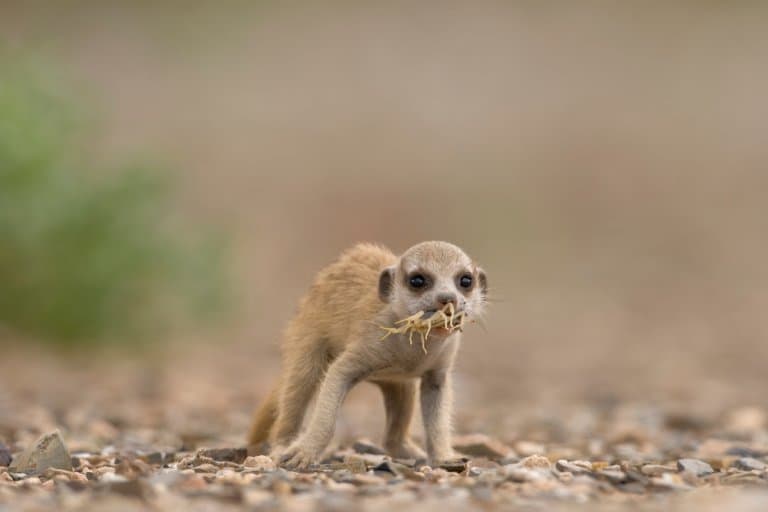 14. Ancient scorpions may have roamed the seas

There is fossil evidence of an arthropod that lived more than 400 million years ago. These ancestors were almost a meter long and were likely apex predators in their environments. 4

Female scorpions release pheromones from their abdomens to signal to nearby males that they are ready for mating.

In certain species, males can also release pheromones to express their interest.

16. When mating they perform a dance called the promenade à deux

This is French for “a walk for two” and involves the male and female scorpion moving backwards and forwards facing each other in a ritual, until the male finds a suitable place to deposit his sperm near to the female.

The female is then guided over the sperm by the male, which fertilizes the female scorpion.

17. In some species, females will consume their mates for reproductive energy

During the courting process, males tend to depart shortly after mating to avoid being eaten by females.

18. Female scorpions transport their young on their back 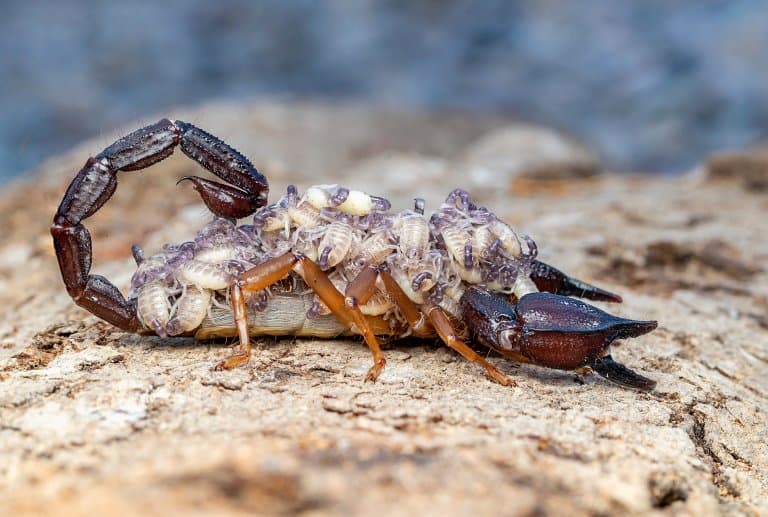 19. They age and develop through cycles of molting

Like many other arthropods, such as crabs and spiders, scorpions grow by molting.

This is the process by which an animal sheds its exterior to make way for an expansion in size. How many times a scorpion molts depends on its species.

20. Under ultraviolet light, scorpions glow in the dark

A substance in their skin causes them to fluoresce under ultraviolet lights.

This characteristic helps in the study of these fascinating creatures as they are most active in the night-time. 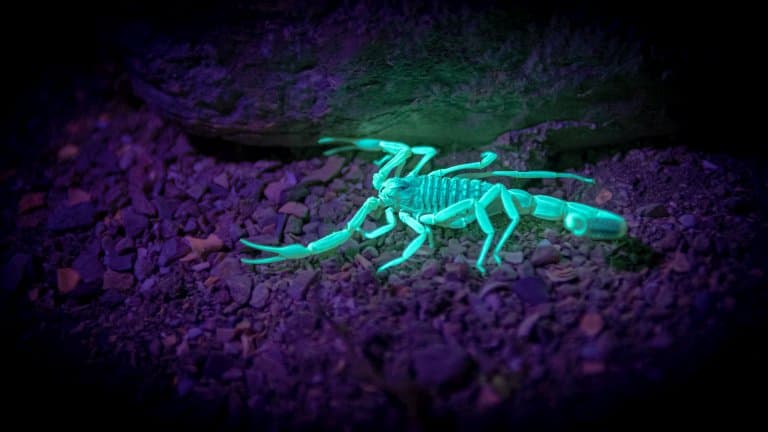 21. Their eyes are tailored to seeing changes in light

Compared to humans, scorpions cannot see very well at all. They are poor at detecting colors and shapes.

However, their eyes are very sensitive to changes in brightness and movement.

22. Species vary greatly in how long they take to mature

Some species are speedy in their development, taking just six months to reach full maturity.

Others require two to three years, with some taking up to seven years to develop.

23. They are remarkably resilient and can withstand radical environmental changes

Researchers have frozen scorpions overnight and thawed them out the next morning, only to find them regain full mobility and functioning.

24. They can survive a nuclear war!

In the early 1960s, scorpions were discovered to be among the few animals that were able to survive nuclear tests at Reggane, Algeria. They seem to be completely resistant to ionizing radiation.