The Mutillidae or, as they are more commonly known, velvet ants, are a family of almost 8,000 species. However, they are not in fact ants, but wasps.

The name velvet ant comes from the appearance of the wingless females, which – with their body shape and size, and covering of a dense layer of velvety fur – resemble a hairy ant.

The vast number of species of velvet ant are spread over several continents. Many different species are found across the United States, as well as in Europe and Australasia. 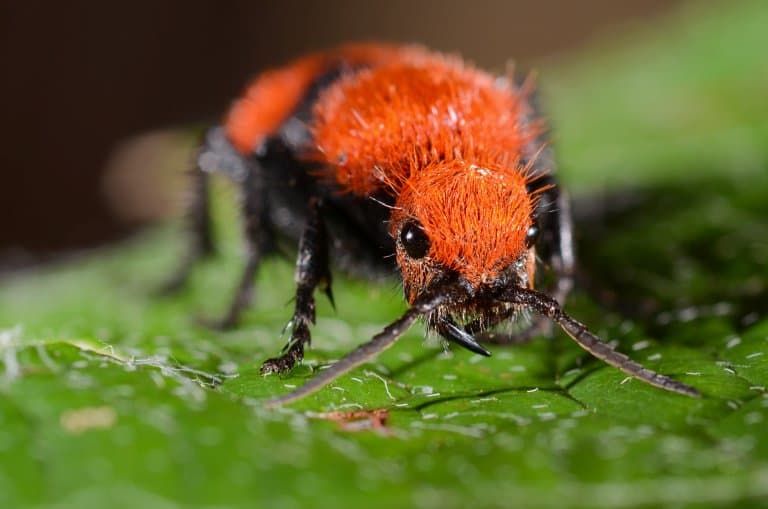 The female body (mesasoma) is made up of two segments, with 6 legs, no wings, and a dense covering of hair. This hair is brightly colored, usually in shades of red, orange, yellow, black or white. The male velvet ant has three mesosomatic segments and large wings. The wide range of species in the Mutillidae comprise many variations on size, shape, and color.

The majority of the species are found in hot, sunny and sandy areas in the Western Hemisphere. They can be found anywhere where there are suitable host species for the laying of their eggs – in wooded areas, wetlands, meadows, and urban areas too.

Despite being large in number, and distinctively brightly coloured, spotting a velvet ant is still relatively uncommon and there is a lot that is still unknown about these insects.

Biological data and details on life stages is therefore somewhat limited, especially since much can differ between species and genera. Here’s what we do know.

The female velvet ant lives almost her entire life alone, searching for places to lay her eggs. The winged males are also solitary, seeking out a female only to mate before the two go their separate ways once again.

The female velvet ant will usually lay only one egg at a time, so much of her life is spent searching for suitable resting places for her eggs. This therefore leaves her often out in the open and vulnerable to attack.

To counter this vulnerability, female velvet ants have developed a series of defence mechanisms to prevent attack: including speed, strength, a loud squeak, and a venomous sting. 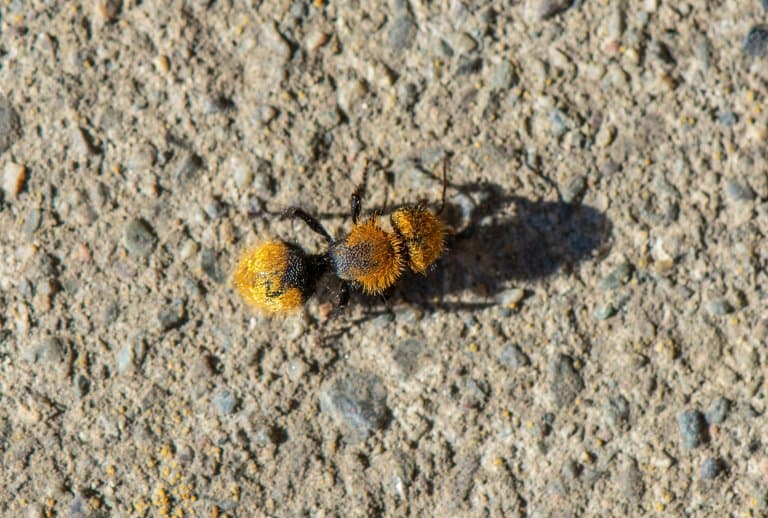 Despite lacking the ability to take flight in order to escape predators, the female velvet ant more than makes up for it with speed and strength.

Their strong leg muscles enable them to run at speeds of up to 0.5 km/h, which is fast for an ant with legs that are millimeters in size!

There are no insectivores that are known to specifically hunt velvet ants, and their arsenal of protective weapons makes for a challenging attack!

In a 2018 study, it was observed that in over 100 interactions with potential predators such as toads, lizards and small rodents, only one velvet ant was successfully killed.

This is another one of their protective measures to prevent attack. It takes around 11 times more strength to crush a velvet ant than it would to squash a honeybee, for example.

Their rounded bodies also tend to resist bites or stings from would-be predators. Entomologists struggle to pierce them with stell pins when mounting them in display cabinets. 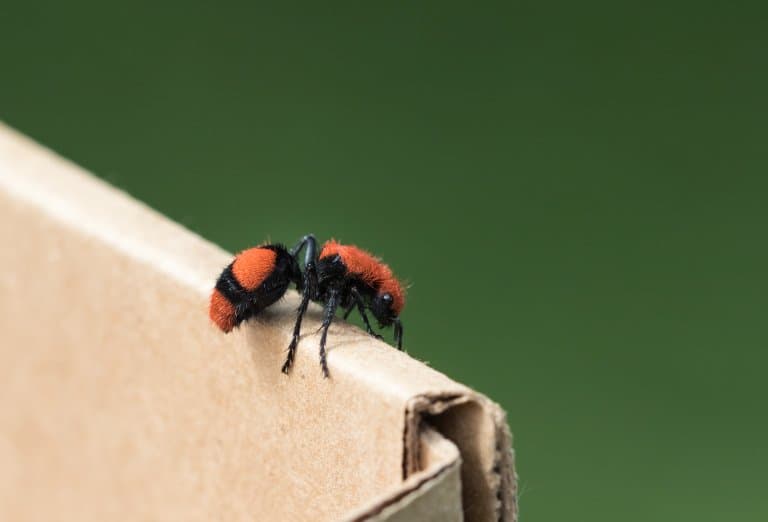 When the female velvet ant is ready to lay her eggs, she will not build or dig a nest, instead permeating the nests of other species by chewing through the edge of the nest, entering, laying her egg and then sealing up the hole with mud.

The velvet ant eggs will be laid on the pupae of other insects, such as ground-nesting wasps, bees or beetles. Once the egg hatches, the velvet ant larva will feed on the host pupa, then create a cocoon for itself before pupating and emerging from the nest as an adult velvet ant. 1

These include bright colours, a strong defensive chemical scent and a loud warning squeak, all of which serve to warn off potential predators. The sound they make is caused by two parts of the abdomen being scraped together, called the stridulatory organ.

During a trial with a shrew, it was observed that the shrew repeatedly attacked the velvet ant, but retreated each time the velvet ant stridulated.

7. The bright colours of the velvet ant are aposematic signals

These signals have evolved in a wide variety of creatures, and can be smells or sounds as well as the bright colours.

The aposematic signals act as a warning to potential predators that an animal is toxic or venomous, and are mutually beneficial – on the one hand preventing an unpleasant experience for the predator, and on the other preventing attack for the prey. 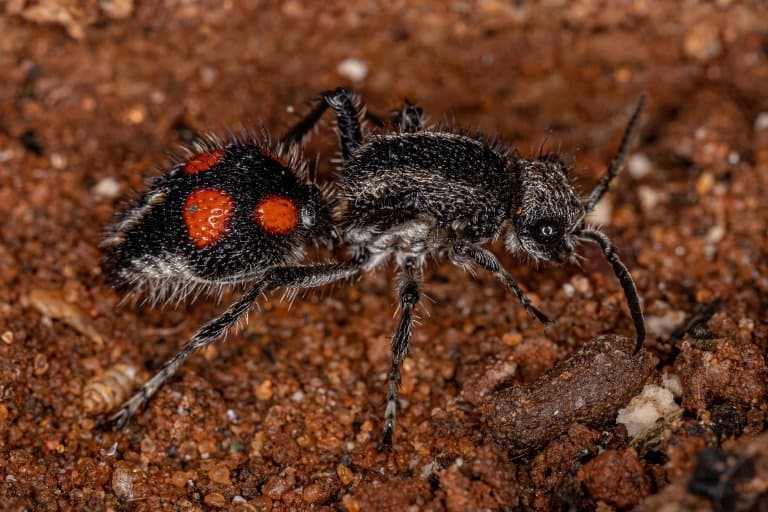 8. Velvet ants in North America make up one of the largest known complexes of Müllerian Mimicry rings

Müllerian Mimicry is a phenomenon whereby several species with effective defences evolve to mimic one another’s warning signals, to each other’s mutual benefit.

In the case of the velvet ant, the sharing or mimicking of colour, stridulation and sting can help deter many potential predators from multiple different species of the ants in turn.

This was seen during a test carried out with birds where mealworms were painted bright colours to emulate velvet ants. The birds avoided these mealworms completely, but ate all the plain-coloured mealworms immediately.

When a live velvet ant was introduced to the test site, the birds wouldn’t feed at all, thus showing the strong learned instinct from these insectivores to avoid velvet ants at all costs. 2 3

9. Female velvet ants have the longest sting compared to their body size of all stinging wasps, bees and ants

Their stinger can be as much as one half of their body length and emits a venom with a pain rating as high as 3 out of 4 on the Schmidt’s sting pain index, which ranks insect stings. This is behind the likes of the bullet ant, warrior wasp and tarantula hawk wasp which are all 4.

Like all wasps, only the female has a sting.

The strength of their sting and the excruciating pain it can cause has earned some velvet ants the nickname of ‘cow killer’, although this is somewhat unfounded.

Their sting is very painful, but not highly toxic, and there has never been a recorded death from their stinger. In fact, the velvet ant venom is around 25 times less toxic than that of a honeybee. 4 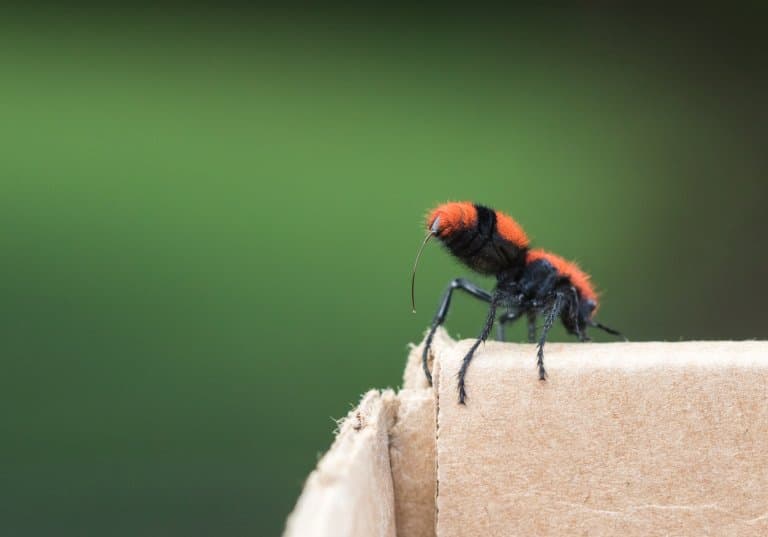 10. It is often impossible to link males and females of the same species

This is due to the extreme sexual dysmorphism of some species of velvet ant, with often highly dissimilar colouration, markings and size between species, and between males and females of the same species. 5