There’s only one way to make the phrase “tarantula hawk” sound more intimidating, and that’s by adding “wasp” to the end of it.

Tarantula hawks are species of spider-hunting wasps in the Pepsis and Hemipepsis genera.

These parasitic wasps paralyze spiders before laying their eggs on it, which subsequently hatch and feed on the still-living, yet helpess, host. 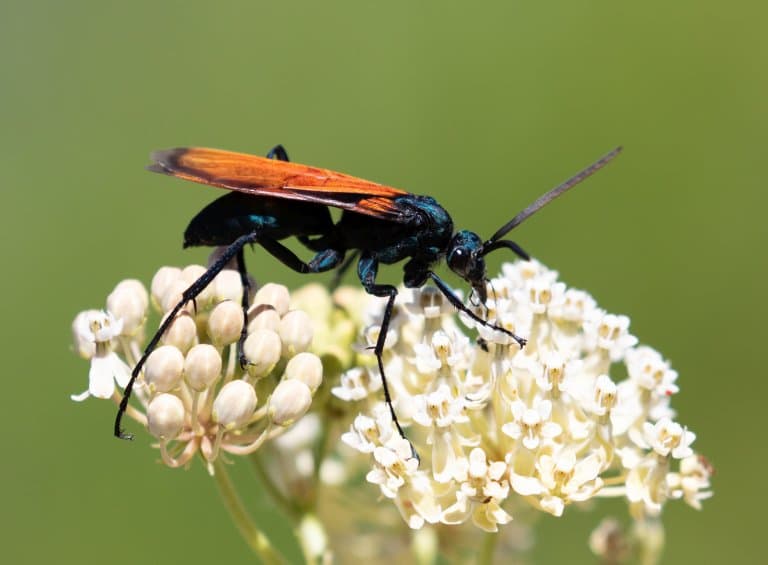 They inhabit all continents, except for Antarctica – with many species common in the USA in the deserts of the southwest. The U.S. state of New Mexico choose a species of tarantula hawk (Pepsis grossa) to be its official state insect.

Tarantula hawk’s are one of the largest parasitoid wasps, growing up to 11cms (4 inches) in length.

They’re formidable warriors when needs be, and are well known for it. But they have a more common, gentler, and less-represented side.

They can be handled with ease, prefer to spend their time around flowers, and are even significant pollinators to several plant species. Adults diet on sugar-rich nectar produced by flowers of milkweeds, western soapberry trees, or mesquite trees.

Still, if you’re ever stung by one, you’ll know it. And if you’re a tarantula, you’re in for an even worse fate.

1. Their stings are high on the Schmidt Pain Index

Demonstrating the type of masochism you might expect from someone with such a name, Justin Orvel Schmidt devised an incredible catalogue of different insect stings, which he tested upon himself.

Called the Schmidt Pain Index, it comprises four levels of pain, ranging from the gentle tingle of a small bee at level one, through honeybees at level two, velvet ants at level three, all the way to level four.

Schmidt gave the sting of a tarantula hawk species, Pepsis grossa, a rating of a 4; second only to the bullet ant, describing the five minutes of the intense pain it brings as blinding, fierce, shockingly electric.

Despite this seemingly mental approach to researching stings, Schmidt is a pioneer in an understandably seldom-studied field. The subjective experience of pain is an interesting concept that can give us ideas about how and why venom evolved. 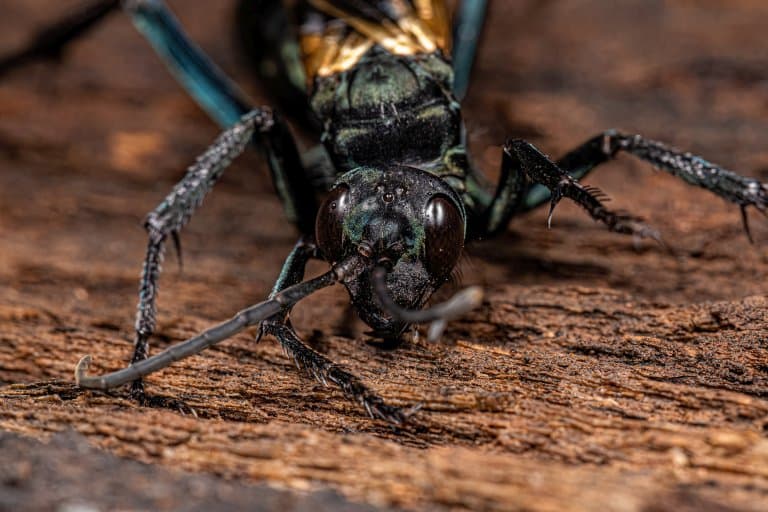 And this pain is no coincidence. Hunting wasps need venom to disable their prey.

They paralyse their host, laying eggs into it, which will later hatch and consume the preserved flesh. That’s their thing. So, pain isn’t really important for hunting.

However, in order for them to go about their day undisturbed they also need venom to defend themselves, and this is where the pain comes in.

Strangely, the venom of the Pepsis wasps, while copious, is relatively harmless to humans. Its strong point is in just how much pain it can generate.

Advice on what to do when stung is “lie down and scream”, and the pain is said to only last around 3 minutes.

“Tarantula hawk venom is an enormous bluff, a biological deceit of major
order. The pain speaks loudly, but no club follows.” 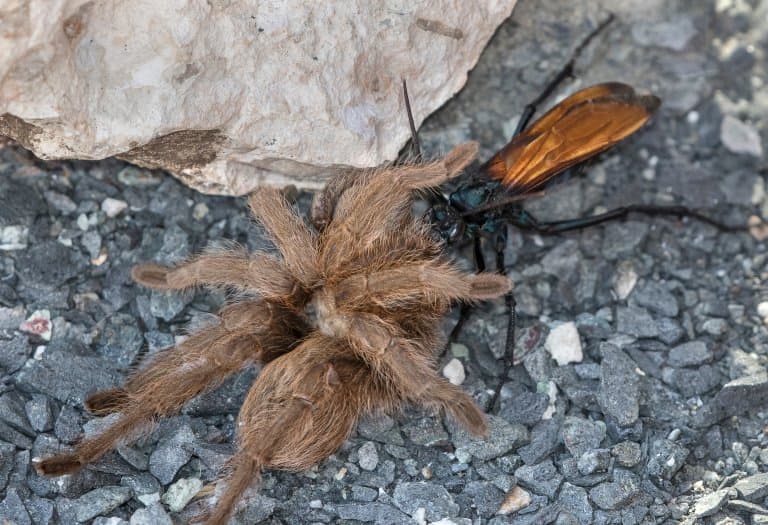 This message is so well understood, most species of tarantula hawk wasps have evolved to look similar to one another.

The red-brown wings, the purple body, and the vivid and contrasting aesthetic all display a clear sign that they’re not to be eaten, even in species that don’t pack quite the same punch as Pepsis grossa.

More than that, even, the pain of this sting against vertebrate interferers is so well understood that other entirely harmless insects mimic it, too.

Flies, bugs, moths and beetles have all been seen flying the colours of the most infamous predator in town. And yet, these are relatively gentle animals…

This might come as some surprise, but tarantula hawk wasps are nectarivores. They enjoy feeding from flowers and rotting fruit.

It’s possible to pick one up, if you ever manage to get close enough, without being stung. They’re decidedly non-aggressive to humans, and will only sting if provoked.

They are important to many plant species, in particular Milkweed species that tailor their nectar content specifically to the needs of the wasp to attract them. The pollen then attaches to the palps and legs of the wasp and is carried between flowers.

So, these wasps are calm and relatively harmless pollinators… unless you’re a tarantula. 2

Only the female hunts and she does it for her young. During mating season, she will mate with the largest male she can find, who at this point will be patrolling the undergrowth in search of females.

After mating, she begins looking for a place to lay her eggs. This is done by way of an eerie patrol, in which the sometimes mouse-sized wasp performs an urgent, leathery scuttle through the scrubby grasses of the desert or savannah.

She’s looking for spider burrows, and when she finds one, she’ll clip the protective silken shield covering the opening and enter, aggressively driving the owner out into the open.

Once the spider is exposed, the wasp exploits an irony in its defences. When provoked, the spider rears up, exposing its enormous fangs as a warning.

This warning also exposes a nerve cluster that’s prime for disabling, which the wasp readily does so through a 7mm curved stinger, placed between the sternum and the shoulder joint.

The wasp will sting the spider repeatedly until it’s entirely immobilised, and drag it with powerful, hooked legs, to a strategic location, sometimes over the course of many hours.

This performance is definitely risky for the wasp, and some don’t make it, but there seems to be more going on than just a battle of agility.

As far back as the ‘20s, researchers were puzzled by the success of these wasps in disabling such a nimble and fierce predator and suggested chemical messengers may be involved.

It’s possible that there is a form of hypnosis going on in some instances, in which the wasp deceives the spider into hesitating or mistaking the hunter for a friend.

One researcher from Yale described the following interaction between a tarantula hawk and its prey:

“She walks over her legs and body without in any way producing an effect on the spider. Again she returns, walks over the back of the Avicularia, catches a leg with the claws of her hind leg, pulls at it, and goes away. Avicularia does not respond. She is as motionless as if paralyzed. Eleven times the Pepsis crawls over the tarantula in the same fashion. Now I blow gently at Avicularia and in a bound, she crosses the cage to the other corner. She is, then, perfectly sensitive to touch, but for some unaccountable reason does not respond to the touch of the Pepsis or instinctively keeps quiet.”

This mystery still hasn’t been solved, and whether the wasps’ success is pure skill or chemical mastery remains a fascinating question.

Bees and wasps both have complex and well-adapted pheromone communication mechanisms in many species, so it’s certainly possible that tarantula hawks have modified this to stun their prey before the attack. 3 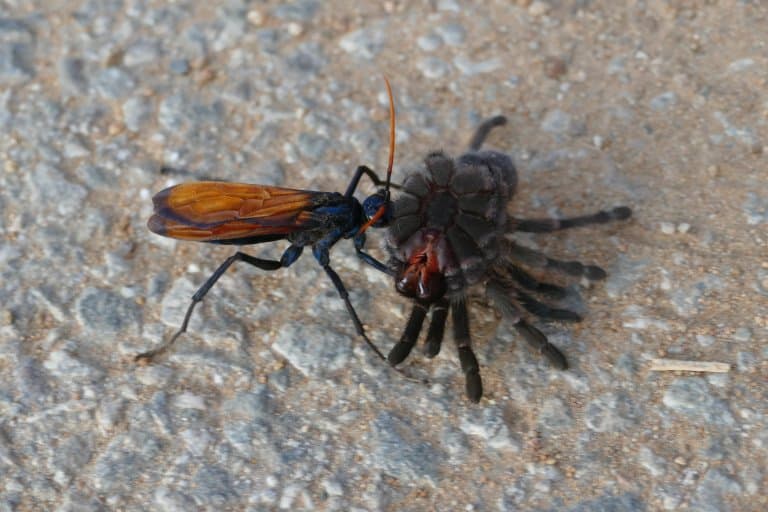 7. The larvae feeds by keeping the spider alive

Since the spider is still alive, all its flesh is preserved.

On hatching, the larva nibbles away at its unfortunate host, avoiding all the important life-support and keeping the spider alive for as long as possible.

The more it eats, the bigger it gets, shedding several times before emerging as an adult. 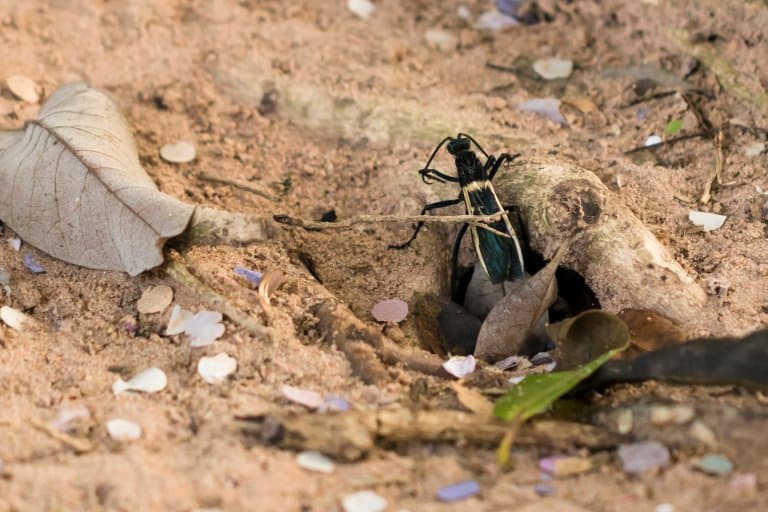 8. Males do not have stingers

Not only do males not hunt tarantulas, but they also don’t have stingers.

Females have a 1/4th inch (7mm) stinger, which means many predatory animals avoid these wasps completely, as few can eat them.

One of the few is the roadrunner, a fast-running ground cuckoo found in the deserts of the US and Mexico.

You can tell the difference between males and females, as females generally have curly antennae, while males are usually straight.

9. They don’t drink and fly

Fruit can become alcoholic when it ferments in the fall, or in thw inter when the cold concentrates the sugars which break down to produce alcohol.

Tarantula hawk wasps can consume a lot of fermented fruit, and sometimes this intoxicates them to the point that flight becomes difficult.

This is more common than many realise. Birds suffer similar impariment and fly into walls and windows, and be an easy target for a domestic cat. 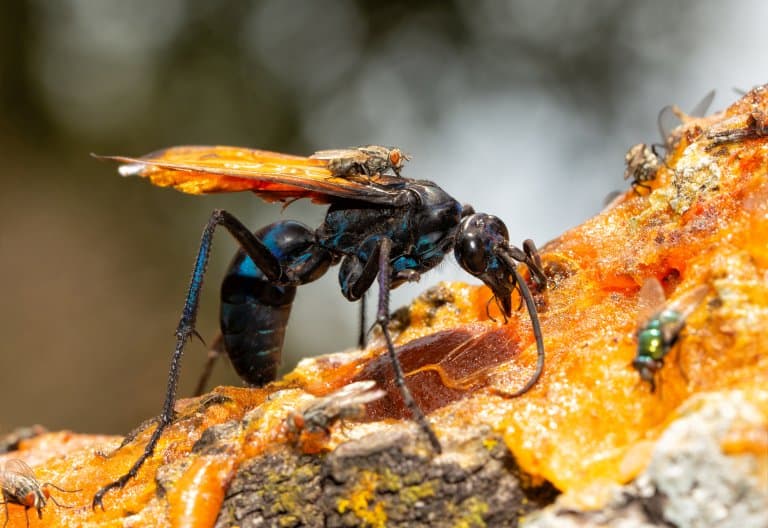 A tarantula hawk’s lifespan is typically short. They are a larvae for just a few weeks, and their adult life stage is not long either.

Males live for only a few weeks, while females live for about four or five months. Just enough time to hunt a tarantula, lay their egg, and start the cycle of life again.