If you’re in the tropical forests of Central and South America and you hear a drumming sound, you might be in for a treat.

Warrior wasps are also known as drumming wasps, and are from the genus Synoeca, which contains 6 species of eusocial paper wasps. 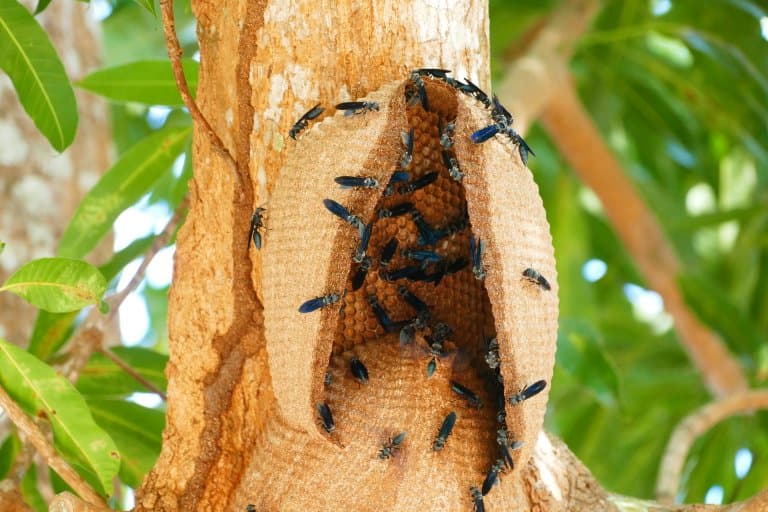 Warrior wasps are stunning, eusocial paper wasps, living in small but efficient colonies at low altitudes in the tropics of central and South America.

They inhabit tropical rainforests, and build nests in trees on the underside of branches and the trunk of trees. As their name suggests, they are known for their aggressive behaviour and will protect their nests. They are powerful fighters, yet go into battle only if their war drums have no effect.

Warrior wasps diet on sugary foods, such as nectar, honeydew, and the juices of ripe fruits.

This wasp certainly knows how to make a person anxious, yet in a bizarre twist of evolutionary irony, their venom may hold the key to calming you down.

These insects are often called drumming wasps due to their unusual percussive defence mechanism.

Sensitive to loud noises or the proximity of a threat, these wasps respond to intruders with a rhythmic Jumanji drumming sound that reverberates through the nest.

In most cases, this is enough to deter predators, but if that doesn’t work, they’re known to swarm aggressively.

2. They have the highest ranking insect sting

Sting researcher and self-harmer-for-science Justin Schmidt put the sting of the warrior wasp at the most extreme end of his sting pain index. It has the highest ranking of any insect sting on the index, sharing its position with the bullet ant and the tarantula hawk wasp.

Schmidt described the sting of the warrior wasp as:

“Torture. You are chained to the flow of an active volcano”

There are suggestions that the only insect with a more painful sting than a warrior wasp is an executioner wasp.

These stings are well designed to cause pain and help to keep the colony safe from much larger, vertebrate enemies. 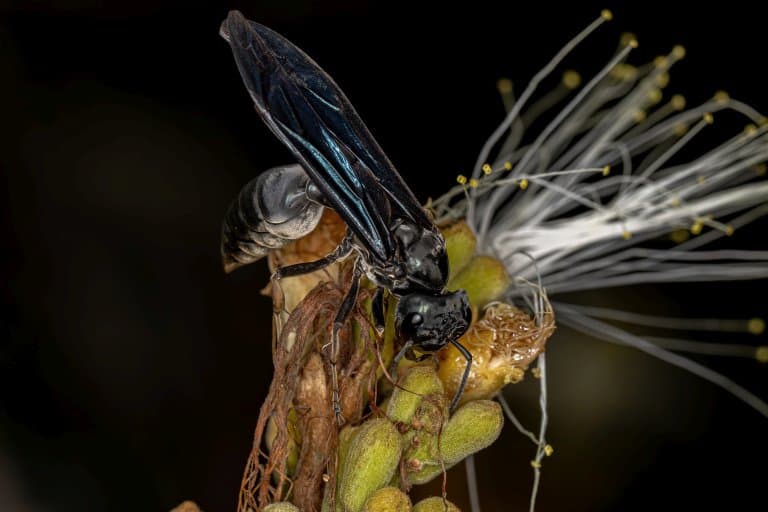 3. Their nests stay very active for many years

Most of the paper wasps you’re probably familiar with will build seasonal nests, inside which only the queen remains at the end of the year, moving on to find another place to set up her next generation.

In Synoeca species, nests last several years, and though they only contain fifty to a few hundred individuals, they’re very productive. Each nest can have multiple queens, their reproduction suppressed by the pheromones of the breeding queen until she dies.

Each worker flies a sortie in under a minute, out and back to the nest, for hours at a time, and can carry up to 10% of its body weight back with it.

This is unusual among nesting wasps, and a result of the lack of extreme weather changes in more equatorial climates, which allow them to stay in one nest for longer. 1

The comb built to the tree trunk has a characteristic shape of an armadilo, which is why they are also named ‘marimbondo-tatu’, or ‘armadillo wasp’. It’s well established that these warriors can defend themselves against vertebrate predators.

Incidentally, another commonality shared with honeybees is a barbed sting, which may get stuck in vertebrate skin, killing the wasp. But many of their major threats are a lot smaller.

Army ants and other paper wasps will commonly feed on them, and these are animals for whom a painful sting doesn’t really cut it. In order to survive these raids, some species of warrior wasps build intricate nests with multiple entries and exits, dead-ends, and other complexities in the nest structure and location that make it tricky to invade.

At least one bird species has been spotted seemingly nesting and roosting in trees with Synoeca species in them. This is thought to be a form of commensalism; an arrangement where one animal benefits the other at no cost or reward to the animal.

This arrangement between the bird and the wasp has been widely reported, despite seemingly insufficient evidence to back it up.

The exceptional defences of the warrior wasps may help keep both predators and parasites away from the birds. While there does appear to be an association between at least one nesting bird and the presence of wasps, statistical analysis (with a very small sample size) showed that it was not a significant one. 3

7. Warrior wasps can be pests and protectors

Most times, these payloads are insects. In fact, warrior wasps can be a great help to the farmers of various fruits, by removing the larvae of flies that would otherwise damage their crops.

Commonly, when there’s plenty of food to go around, the presence of Synoeca helps keep fruit protected, but in other cases, when there’s a local depletion of their natural resources, their foraging behaviour becomes more intense.

This increased intensity when hunting for larvae often results in the skin of the fruit being significantly damaged by the wasp, and yields dropping. 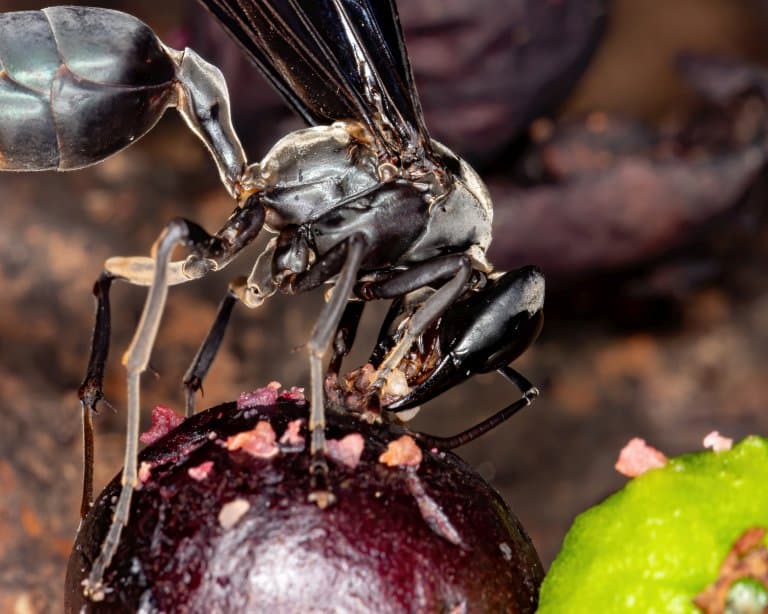 8. They could help with a solution to antibiotic resistance

Much like many insect venoms being studied right now, the venom of the warrior wasp may be of significant use to medicine.

One of the most famous cases of antibiotic resistance is MRSA. This is a strain of Staphylococcus that has evolved to tolerate our best weapons and can wreak havoc on the soft tissues of the body and even cause death if it enters the blood.

The venom of the warrior wasp Synoeca surinama has shown promising activity against this bacterium, as well as demonstrating potent antimicrobial activity against MRSA, E. coli and even fungal pathogens like Candida.

This toxic cocktail may help researchers develop new treatments against microbes that are not hampered by bacterial resistance.

Other, newly-discovered compounds in the venom of these wasps have intrigued medical researchers with their potential for treating anxiety. 4