The magnificent frigatebird’s name isn’t in vain. With large, eye-catching ruby throat pockets and a purple sheen on their black feathers, these seabirds appear to be made out of gemstones.

Magnificent frigatebirds are large, carnivorous seabirds found in most tropical areas, including continental North America and South America, as well as certain islands in both the Pacific and Atlantic Oceans. 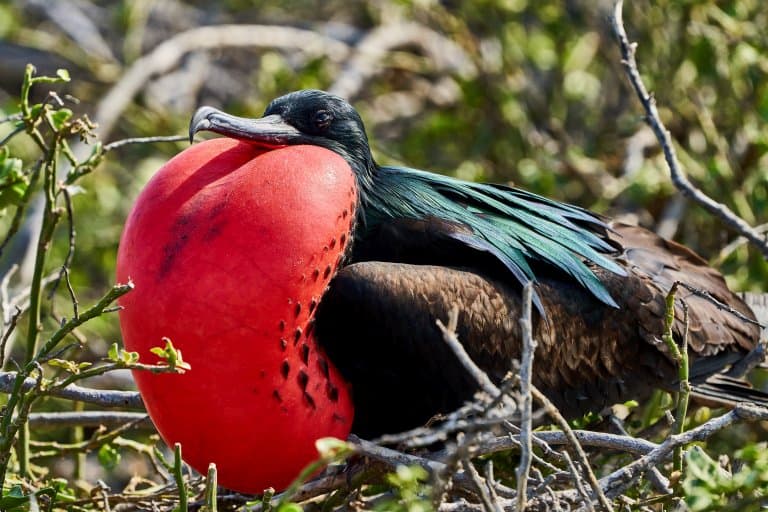 The magnificent frigatebird has long been apart of documented history. Many of the earliest voyageurs taveling from Europe to the Americas noted the bird’s appearance in their journals.

They inhabit, nest and breed in trees in the tropical Atlantic, from Florida, the Caribbean to Mexico, Ecuador and the Galápagos Islands. But they have even been seen as far as the UK.

Although lightly built, they are the largest species of frigatebirds, measuring between 3-4 feet in length, with a wingspan of 2-2.5 feet.

Like other types of frigatebirds, the magnificent frigatebird is actually noted for its aggression towards other birds, to steal their food from them. They also diet on fish, particularly flying fish, as well as jellyfish and squid that they swoop down and catch from the water.

Although their appearances are vastly different, there is no name to differentiate between male and female magnificent frigatebirds. Males are black with a scarlet throat pouch, while females are black/brown with a white breat and lower neck.

1. There are two different subspecies

Although there is only one species of magnificent frigatebird, there are actually two different types of subspecies.

The first of these is F. m. magnificens. This is the subspecies that breeds and lives on the Galápagos Islands. The second subspecies is F. m. rothschildi. These are much more widespread. You can find them in both the Pacific and the Atlantic Oceans, on both continentals areas and islands.

Typically, thanks to migrations, birds of a feather (the same species) will also intermingle no matter how far apart their homes are.

However, studies have found that this is not the same from magnificent frigatebirds found on the Galapagos Islands. Instead, this population has been genetically separated for hundreds of years. 1 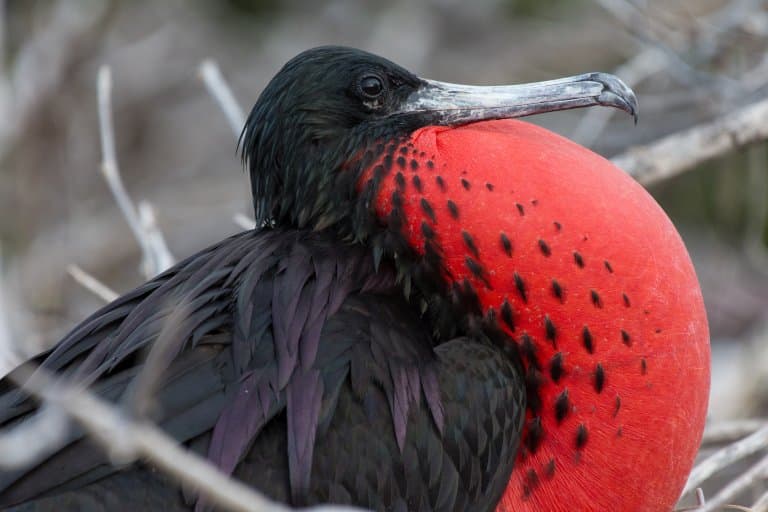 2. Males have an inflatable throat sac to attract mates

Animals can have a stange way of attracting mates, birds especially. Some may perfect the perfect song, others the perfect dance. The magnificent frigatebird?

They use their large, inflatable throat sac they possess to draw the eye of females! On top of that display, they make a bizarre drumming sound ‘mating call’ using specialized beak clackings resonating in their inflated pouch.

In many ways, the male’s throat sac is similar to other more common animals, such as lizards or frogs. It’s a bright red color and perfect for drawing attention and finding a mate for the breeding season. Vinni Madsen (2007), “Morphology and Ornamentation in Male Magnificent Frigatebirds: Variation with Age Class and Mating Status“, University of Chicago Press Journals.

3. They steal food from other birds

Often, you’ll see wild animals fighting over food that hasn’t already been eaten. The same cannot be said for the magnificent frigatebird. Instead, they engage in a food-stealing tactic known as kleptoparasitism.

This has also earned them the nickname “man-o-war bird”! 2

4. They are the largest species of frigatebird

The magnificent frigatebird is the largest of the lot with a body length of 89–114 cm (35–45 in) and the longest beak. Their size provides them with plenty of power to fly fast, and to bully other birds!

Although it may seem strange, these seabirds aren’t waterproof. Many types of seabirds have a special powder on their wings that helps water slick off their feather. This protects them from the water and helps them to swim.

Because the magnificent frigatebird lacks this quality, they won’t spend any time on or in the water, despite having webbed feet for swimming.

As a result, they’re one of the most fly-happy birds, spending a majority of their time in the air when they’re not nesting. 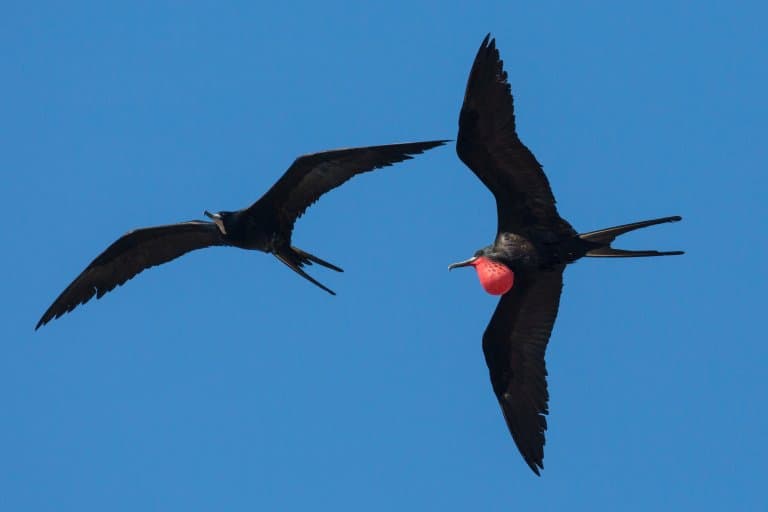 The magnificent frigatebird is a highly migratory bird. While they don’t typically leave the area in which they live, they can travel up to 410 kilometers in a single day before landing.

Not only that, but they can do this over several weeks, traveling thousands of kilometers. They can utilise the thermals, to climb to heights over 2,500m where they slowly descend down to the water.

The only other bird known to spend days and nights in the air like the magnificent frigatebird, is the common swift.

In the wild, survival is everything. It’s often thought that animals’ number one priority is surviving long enough to pass their genes on – and that involves ensuring the success of their offspring as well.

As a result, you’ll often see wild animals having large litters or clutches. Frogs, for example, can have hundreds of eggs. Most birds have at least four to six eggs per clutch.

The magnificent frigatebird, however, only lays a single, small egg. Having only one chick allows for the parents to dedicate all of their time to this egg, though.

Before hatching, both parents will incubate the egg. However, the male will abandon both the female and the new chick around the time of hatching.

The mother will then spend the next few months caring for their chick. Even after it leaves the nest, the mother will help her offspring hunt for the next year. 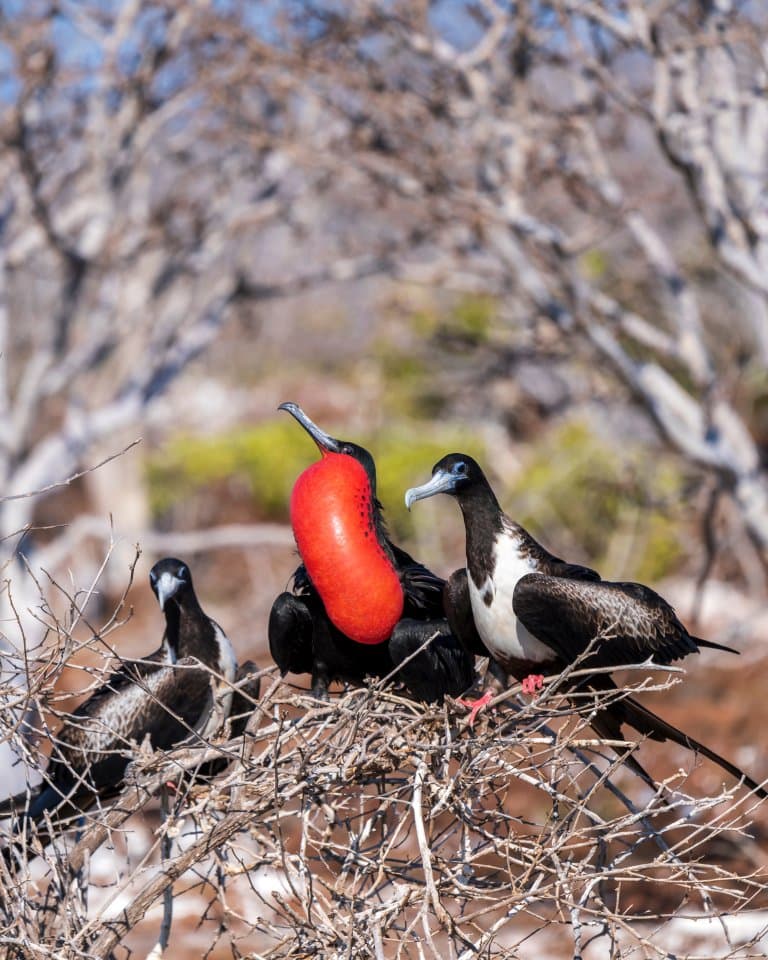 8. They may not be considered ‘least concern’ for much longer

As of right now, the magnificentt frigatebird is considered to be a species of ‘least concern’.

However, this may change in the future. Already, certain populations of the bird are going locally extinct. The most notable population to suffer from this would be on Cape Verde.

Like other animals, the magnificent frigatebird is also affected by overfishing, pollution, and loss of habitat.