There’s a family of fish who have a unique strategy for avoiding predation. They’ve taken to the air. These are the exocoetidae, or Flying fish, and they are quite extraordinary in their abilities. As it happens, they need to be; they’re hunted by almost everything larger than they are. 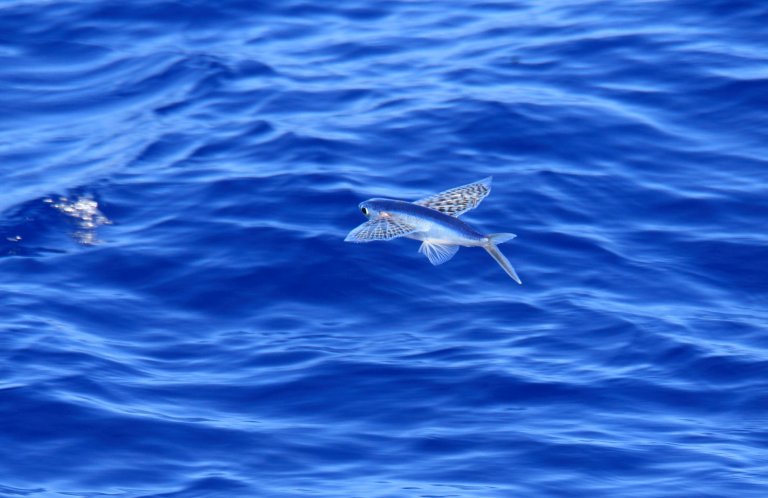 Exocoetidae contains about seven genera (to date) and many (between 40 and 70) species, all of which are defined by their elongated fins.

They live in all oceans, but particularly in tropical waters up to a depth of around 200m. Exocoetidae diet mainly on plankton

These are fast and agile fish who rely on certain stiffening adaptations in their spines to reduce drag and loss of momentum when escaping predators.

In general flying fish populations are in good shape with over 50% of the species classified by the IUCN as least concern.

This is a downer, isn’t it? The first fact about the majestic flying fish dispels any illusions of it actually existing. Well, the fish part does exist, but the flying is a bit of a leap. In fact, that’s exactly what it is. Still, this is an incredible ability.

Flying fish jump out of the water and can glide for extraordinary distances on their wing-shaped pectoral fins, which are shaped to generate lift, just like a plane wing. 1

2. They outperform the first plane

Flying fish have been recorded ‘flying’ for up to 45 seconds. That’s almost four times as long as the Wright brothers’ first flight.

Their average distance is about the same as the first flight, at around 50m or 180ft, but they’re capable of travelling much further than that.

It’s thought that leaping out of the water is a great strategy for escaping predators. Tuna and swordfish are extremely agile and fast hunters, and one way to escape them might be to leave their environment entirely and re-enter it at some random spot.

This does occasionally lead to them landing on people’s boats, but in general, it’s probably very effective at getting away from larger fish.

4. This doesn’t work against birds

Jumping out of the water is a great strategy to evade larger fish, but unfortunately for the flying fish, they have predators in every dimension. Frigate birds are often waiting in ambush from above, ready to pick off any flying fish that jump too high. It’s definitely not an easy life.

Flying fish are, however, an integral part of the ecosystem. Anything that’s eaten this much and by this many animals is important for holding the system together. This makes it even more important to protect their habitats.

5. They can blow up ships

Well, not really. But the Exocet missile is named after them, and that certainly can. It’s the French word for Flying Fish and comes from the Latin exocoetus. Flying fish are actually named for flying into boats, or possibly after the idea that they would fly onto land to sleep at night.

The family name comes from a Greek root word that means “to sleep outside”, and the fish itself was recorded in text as Early as AD77, by Pliny the Elder in The Natural History.

6. They have specialised tail fins

It’s been mentioned that they can glide for upwards of 50 meters on average, but these little fish have a very cool tail adaptation that allows them to propel themselves along without re-entering the water.

With rapid bursts of energy, their elongated lower caudal (tail) lobe generates huge thrust, which can extend their gliding for up to 1300ft or 400m! 2 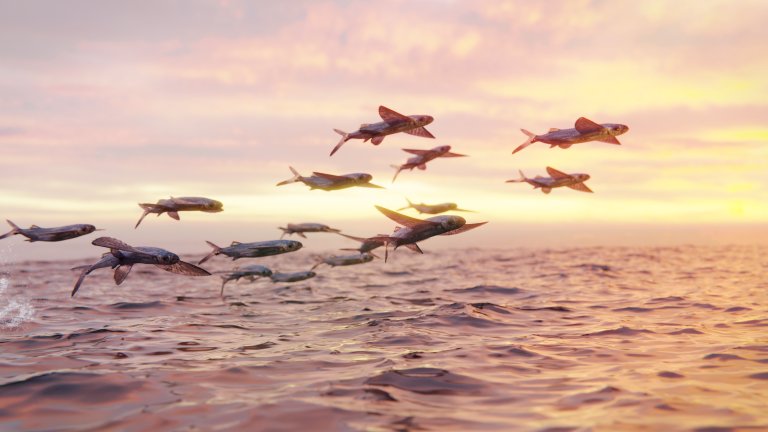 7. They come in two-winged and four-winged models.

In flying fish, the pectoral fins are enormous. These are attached to the ‘chest’ of the fish and used to glide.

Some species, however, also have elongated (or hypertrophied) pelvic fins. This makes them more stable in the pitch axis – or up and down – but does increase drag in the water. 3

8. They’re the national symbol of Barbados

Once common in the coral reefs of Bridgetown, they’ve since been overfished and had their habitat damaged in the area by local and large-scale fishing vessels and pollution.

The flying fish still shows up on coins and on coats of arms, statues and even in the Barbadian passport.

It’s also consumed there as a delicacy and has been overfished to the point where it’s no longer common. 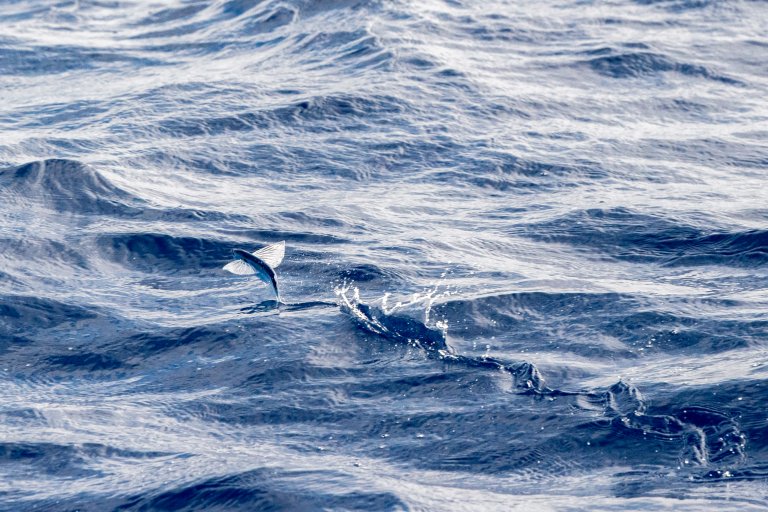 9. Before they fly, they hide as plants

Mating occurs in the open ocean and the female flying fish attaches her eggs to floating debris and seaweed. When they hatch, the babies have plant-like protrusions from their mouths, supposedly for camouflage.

10. They take part in sexual events with 1 million individuals

For two hours this festival of debauchery between the flying fish and the researchers continued, and from the direction the fish were travelling and their speed, the team estimated that there were over one million flying fish of the species Parexocoetus brachypterus fish involved.