Some sea creatures are cute, some are scary, and some like to put all their character points on weird.

The giant sunfish is definitely in the latter category, as it flaps about enormously with its mouth open on the surface of the ocean, seemingly unable to do anything else.

However, there’s more to this fish than meets the eye.

Known as “the swimming head” in German, these bizarre-looking animals were seen floating aimlessly on the surface and assumed to be sluggish and at the mercy of the currents.

More recent discoveries have shown them to be surprisingly mobile, despite being one of the heaviest animals in the ocean. While getting to this weight, they undergo a phenomenal transformation from tiny stars to gargantuan pasty masses.

The mola genus to which they belong has two other species: Mola mola (the ocean sunfish) and Mola tecta (the hoodwinker sunfish). All are very large heavy fish!

Giant sunfish will hunt for food and diet on jellyfish, small fish, brittle stars, plankton and cephalopods. Some sunfish has been witnessed eating seabirds on the ocean surface.

They’re not particularly pretty and don’t taste very nice, so not much wants to eat them, which is one of the reasons we still don’t know a lot about them.

Still, we were able to put together this list of cool things for you to read, so dig in!

1. Their larvae are sun-shaped

The adult sunfish doesn’t look like any sun you’d want to lie under. It’s a strange, flappy, grey head with a perpetually confused expression and an asymmetry that only a mother could love.

So the name sunfish probably relates to the way it basks in the heat, trying to stay warm and encourage birds to eat its parasites.

However, its larvae and fry are tiny, star-shaped little balls that are covered in fins and resemble cute little suns. 1

2. They can put on a lot of weight

Not a lot is known about the young of Mola alexandrini, despite the number of babies they produce.

We do know that newly hatched sunfish larvae are around 2.5mm across and grow from less than a gram to hundreds of kilos in a year and a half.

They’re capable of growing up to sixty million times their original weight by adulthood, which may be the most extreme size growth of any animal. 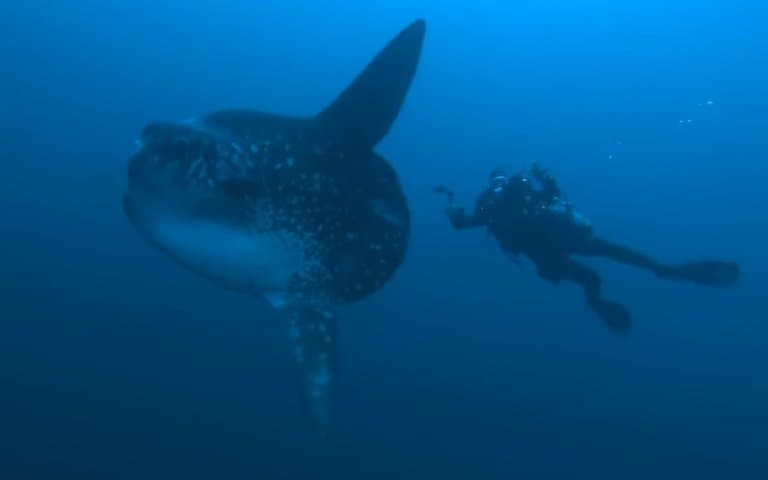 3. They are the heaviest bony fish in the ocean

By the time the giant sunfish reaches its maximum weight, it’s the heaviest bony fish in the ocean.

One particularly giant specimen was found was found floating near Faial Island in the Azores archipelago in Portugal, which weighed in at 2,744 kg (6,049 lb).

This is well over two tonnes and heavier than most cars. 2

4. They’ve lost most of their bone

Despite being classified as bony fish, the Mola skeleton is mostly cartilage.

This is likely an adaptation that compensates for the animal’s lack of a swim bladder, and much like in sharks provides some buoyancy without the need for gas. 3

5. They can change colour!

Live specimens of these giant sunfish have been recorded changing colour instantaneously to dark, pale, or spotted colours.

It’s unclear as yet why this is, but it could be a threat display or some form of mating communication. 4

Despite their enormous mass and seemingly useless fins, these fish can move.

Their closest relatives have been seen breaching out of the water, and there’s every reason to suspect that this species is capable of the same feats of acrobatics.

Molas have been witnessed rushing to the surface from a deep dive with surprising bursts of speed, using their opposing fins as wings to propel them through the water.

7. They lay more eggs than any other known vertebrate

Female mola fish produce up to three hundred million eggs at a time.

That’s more than any known vertebrate!

8. They may dive daily and deeply

The close cousin of the giant sunfish, the Mola mola was also thought to be a sedentary mass of flappy meat until it was recently discovered to be capable of daily vertical migrations of around 500 meters.

This suggests there may be similar behaviour spotted in Mola alexandrini, and research supports this, though it’s likely the comfortable depths that the giant sunfish reaches are in warmer waters than its more cold-tolerant cousin. 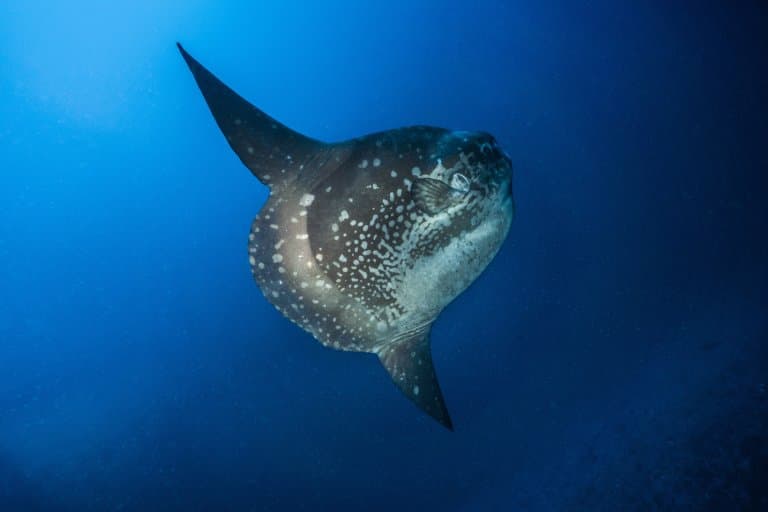 One of the reasons we don’t know all that much about these animals, despite being common, huge, and slow-moving, is that they don’t seem to have any economical purpose.

This is a blessing and a curse, as it has kept the sunfish off the menu of commercial fishing, but it also means that very little money has been put into finding out how they’re doing.

It’s not just humans who seem relatively disinterested (though they are a delicacy, like a pufferfish, in Japan); not much in the ocean seems to want to eat them, either.

Shark attacks do occur, mostly because tigers sharks will eat literally anything, but even the least fussy predator in the ocean seems to seldom show an interest.

The Ocean sunfish, Mola mola is a very similar animal whose numbers are in decline due to high bycatch rates, as it’s tangled in nets set out to catch other fish. It’s safe to say the giant sunfish is suffering a similar fate, and because we know so little about it, it’s going to be difficult to design any effective recovery programs. 5

You may be able to tell from the gormless expression, but Mola species are related to pufferfish.

While they don’t have the characteristic spines, they do share some other defences that explain the lack of interest from the commercial fishing industry.

Just like pufferfish, Mola species have been said to have concentrations of Tetrodotoxin in their tissues, though when tested in one study, no such results were found. Yet, the fish is still listed as hazardous to health in the EU, possibly based entirely on its relationship to the puffer.

More research has to be done here, but if it turns out that they’re safe to eat, this may fund a much deeper scientific delve into the specifics of this weird fish, even if it’s for a bad reason. 6