Despite their slow movement and decidedly awkward appearance, pufferfish are defensive fortresses that present a unique and daunting challenge to pretty much any predator foolish enough to attempt to eat them.

These rotund little fish can inflate to twice their size in seconds, are covered with fearsome spines, and to top it all off they contain some of the most lethal toxins found in the animal kingdom. 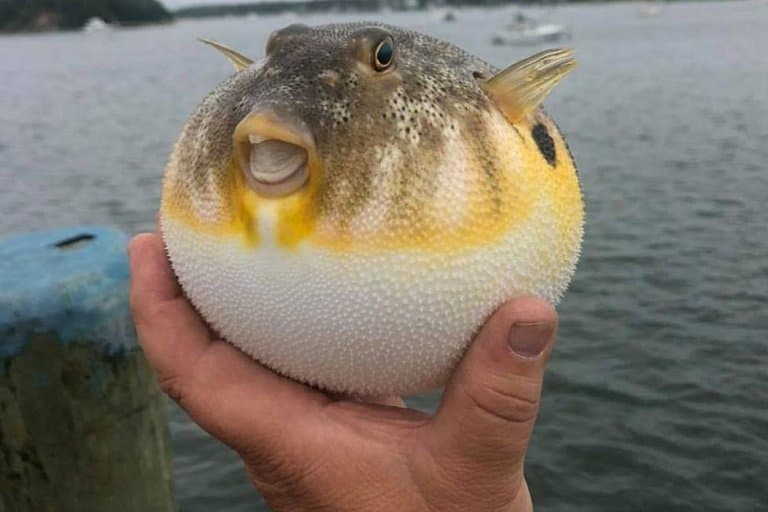 Pufferfish is the common name given to 193 species that make up the family Tetraodontidae, a large group which shares the order Tetraodontiformes with an array of equally wacky-looking species including triggerfish (Balistidae), boxfish (Ostraciidae) and the ocean sunfish (Molidae).

Pufferfish occur throughout the tropical regions of the world, and species can be found in marine, estuarine and freshwater habitats.  They are completely absent from colder waters.

Pufferfish are small to medium in size, although a few species can reach up to 50 cm (20 inches) in length.

While they are well adapted to feed on hard-shelled molluscs, pufferfish are voracious ambush predators of a wide range of smaller invertebrates, though bizarrely many species can subsist purely on plant matter if no prey is available.

1. Pufferfish have no teeth, but they still have a fearsome bite

Instead of teeth, pufferfish have two fused plates in each jaw that meet to form a powerful beak.

This unique adaptation allows them to crush the hard shells of snails, clams and other molluscs which form a major portion of their diet. 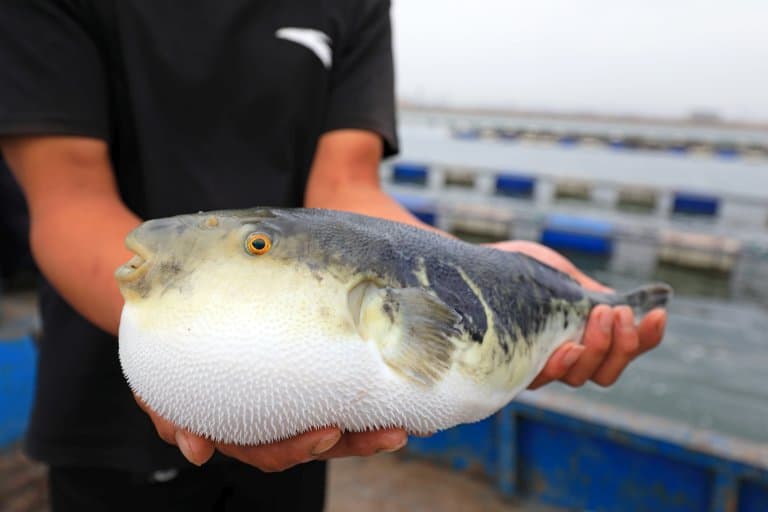 2. They have excellent eyesight

Their eyes can move independently like those of a chameleon, allowing them to scan for predators and prey at the same time.

3. Manoeuvrability is their speciality

Their tails mainly function as rudders, but they can be used for a burst of speed when launching an attack or evading a predator. 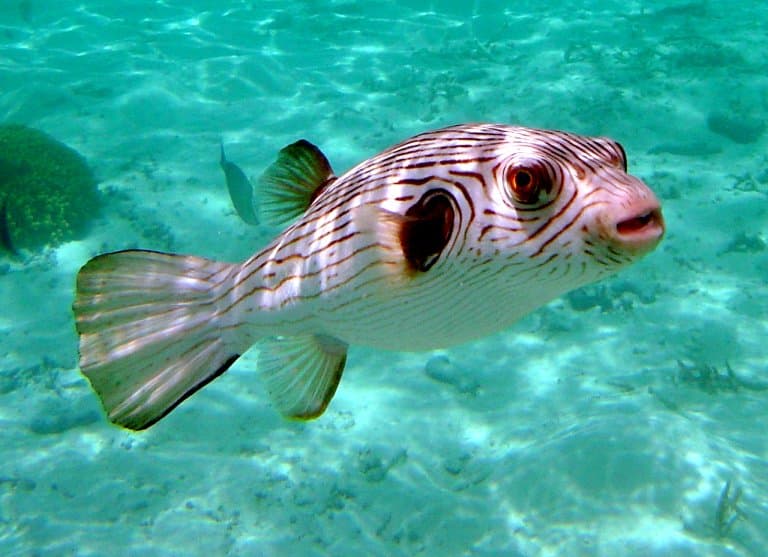 4. When danger threatens, pufferfish turn into spiky balloons within seconds

Pufferfish pull off their iconic defence by gulping water into their highly elastic stomachs.

Most species also have spines that are hidden when they are relaxed but stand on end when they inflate, making them extremely difficult for predators to swallow or even causing them to choke. 5. Puffing up can be a risky strategy

Once inflated, pufferfish completely lose their ability to swim, drifting helplessly until they expel the water from their stomachs.

Inflated pufferfish are often lifted above the surface by curious humans, but their remarkable defence mechanism has not evolved to cope with this and they can die if they swallow air instead of water. 6. Pufferfish are armed with some seriously powerful toxins

Most species of pufferfish are poisonous and contain tetrodotoxin, also known as TTX- a potent neurotoxin that blocks sodium channels within the nervous system.

While pufferfish are well known for their use of TTX, it is widespread in nature and has also been found in certain species of cephalopods, starfish, crabs, toads and newts, among others. 1

7. Certain pufferfish species rank among the most toxic vertebrates in the world

Some pufferfish species contain absurdly large amounts of TTX. The most famous and most toxic of these are species belonging to the genus Fugu, which somewhat paradoxically are also considered a delicacy in Japan.

Interestingly, because pufferfish acquire their toxins from their diet, it is possible to raise non-toxic fugu in captivity by preventing them from eating certain foods. 2

8. Tetrodotoxin found in pufferfish fugu is measured at being 1,200 times more deadly than cyanide

That’s enough toxin to kill 40 adult humans, and there is no known antidote. Poisoning can occur if puffer soup, fugu chiri or sashimi fugu are prepared and served incorrectly.

Chefs that prepare and serve fugu sushi need to be licensed and are trained for over 3 years in how to prepare pufferfish safely for consumption. There are specific parts of a pufferfish that must be removed to ensure they are not deadly, such as the liver, ovaries, eyes and skin.

Despite the above, there were between 20 and 44 fugu poisoning incidents between 1996 and 2006 in Japan, with approx. 6 deaths each year. Little is known about more recent statistics, but they are thought to be even less.

Of these deaths, only one took place in a restaurant, all others involved non-professionals catching and eating the fish. 9. Even baby pufferfish are armed with toxins

Newly hatched larval pufferfish contain small amounts of TTX in their skin, which causes potential predators to quickly spit them out.

Baby pufferfish acquire these toxins from their mothers before they are laid as eggs; this remarkable adaptation allows them to hatch out already well defended, instead of having to wait to acquire TTX from their diets. 3

10. Some species of pufferfish have evolved an unusual use for TTX

Pufferfish belonging to the genus Takifugu use TTX as a signalling pheromone.

Females release it into the water during spawning, where it serves as an attractant to nearby males.

11. Dolphins are thought to use pufferfish to get high

The toxins produced by pufferfish are thought to have a narcotic effect on dolphins in small doses. Dolphins have been observed passing the hapless fish between them and appear to enter a trance-like state- this behaviour is a very rare example of recreational drug use among animals. 4

12. Pufferfish are popular in the aquarium trade, but very few are captive reared

Of the few species which have been successfully bred by humans, only the dwarf puffer (Carinotetraodon travancoricus) has proven easy enough to supply the pet trade.

The overwhelming majority of pufferfish in aquaria are wild-caught, and this kind of exploitation can have serious impacts on wild populations.