The tiger shark is a species in the family Carcharhinidae. It is well known for its large size and its aggression when hunting.

Its name comes from tiger-like dark stripes on its skin, which are clearly visible along the body of young tiger sharks. 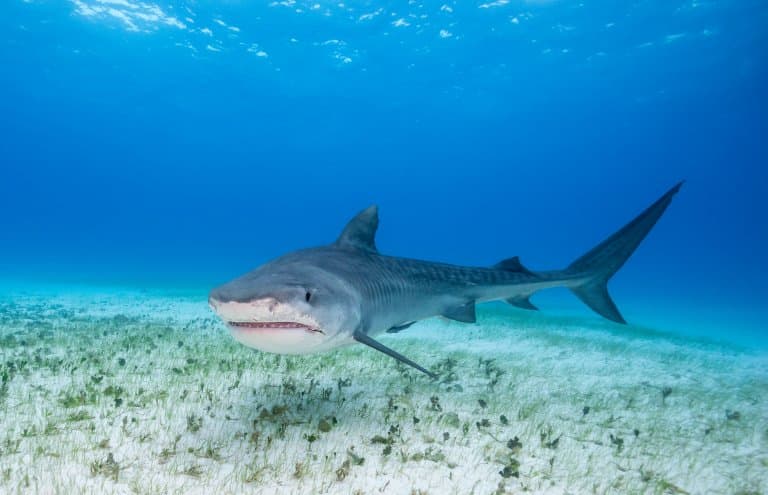 This species, Galeocerdo cuvier, should not be confused with so-called ‘sand tiger sharks,’ which are not its close relatives.

The tiger shark is one of the requiem sharks, renowned as formidable predators with powerful jaws and razor-sharp teeth. It is the second largest predatory shark after the great white shark, measuring over 5m (16ft) in length and weighing 900kg (2,000 lbs).

It is found around the world in marine environments with warm waters, particularly around central Pacific islands, mostly between 45ºN and 32ºS. Occasional sightings in cooler temperate zones may be due to seasonal warm currents such as the Gulf Stream.

Tiger sharks are mostly nocturnal apex predators, that will diet on a wide variety of food including fish, seals, birds, and more. It has the reputation as a ‘garbage eater’, sometimes consuming inedible man-made objects that get stuck in their stomachs.

The tiger sharks conservation status is near threatened due to excessive finning and fishing by humans. The sharks liver is used in vitamin oils, due to its high concentration of vitamin A.

1. It is one of three sharks species known as “man-eaters”

This is due to incidents of fatal attacks on humans. The nickname is misleading, however, as fatal attacks by tiger sharks are rare, and more human fatalities occur by drowning in coastal waters.

The tiger shark ranks second on the list of number of recorded bites on humans, with 36 recorded to be fatal in total. Typically there are around 3-4 shark bites per year in Hawaii, which are rarely fatal 1 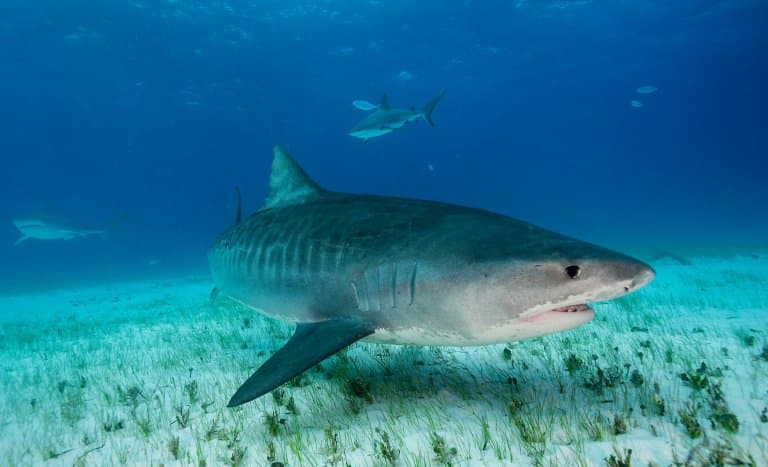 Previously thought to live in shallow coastal areas, where its prey feeds on nutrient-rich waters, it has recently been found up to depths of 350m, and travels long distances in open oceans, following warm currents between islands.

3. Its dark stripes fade as the shark matures

Skin coloration can be helpful to identify shark species but, in the case of the tiger shark, it’s only the youngster who shows the distinctive dark lines and spots, perhaps for better camouflage in the shadows of waves.

As it matures, its stripes fade and the skin takes on a dark blue-green or grey colour above and a pale underbelly. 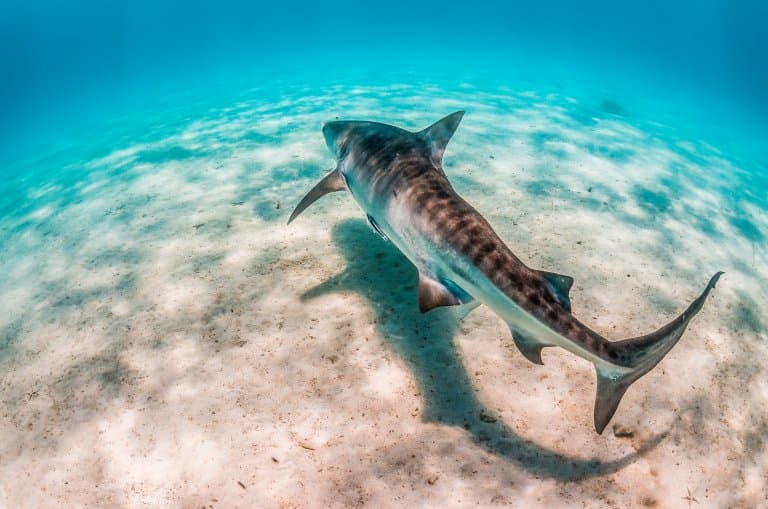 The surface of its skin is covered with tiny teeth-like structures which are thought to reduce friction with water as it swims.

Recent research also suggests that other marine creatures, including fish and other sharks, rub up against tiger sharks to chafe parasites from their own skin! 2

5. Its body has no bones

Its skeleton is made of cartilage, as is the case with all sharks.

6. It is the only species of requiem shark with suction holes

These holes, or spiraculi, are situated behind the eyes. They help to oxygenate blood in vessels that lead directly to the eyes and brain.

7. It has excellent vision in dim light

The back of the eyeballs has a layer of reflective tissue called a tapetum, which enhances night vision. 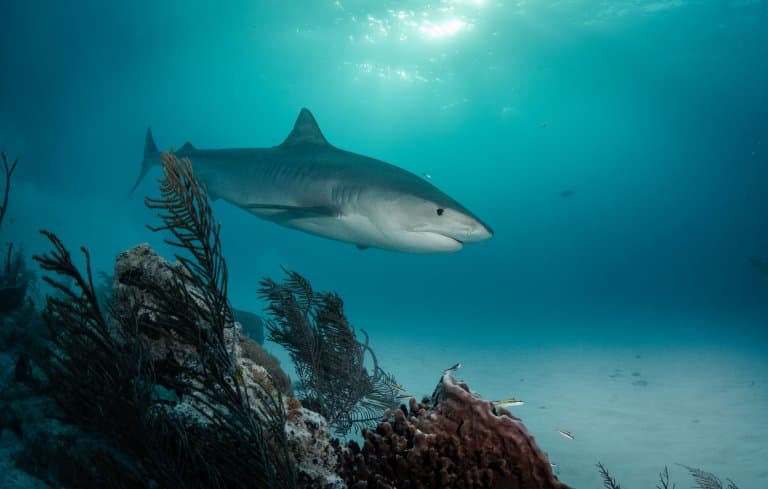 8. It can detect the electric fields of prey animals

Like many of its fishy relatives, it has small pits on its snout which hold a network of sensing organs called ampullae of Lorenzini. These detect electric fields, including the weak impulses emitted by prey.

9. It is a social creature

Commonly thought to be entirely solitary, research has found that it makes choices about which other tiger sharks to socialise with, especially when in shallow waters near the coast. 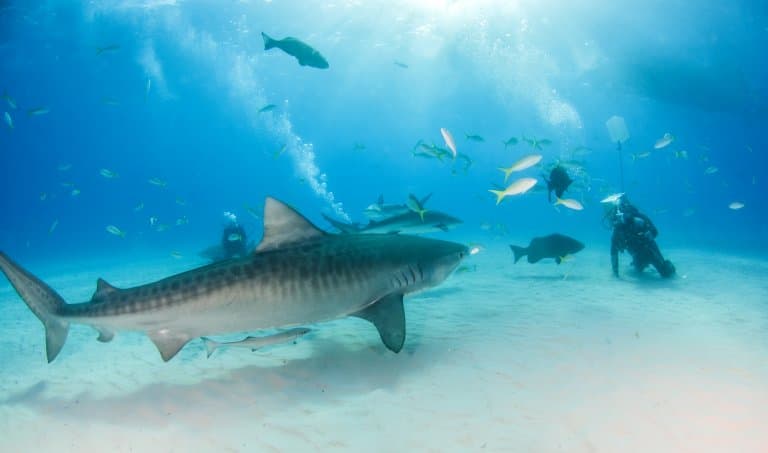 10. Its diet is the most varied among all sharks

It eats marine animals such as stingrays, dolphins, seals, squids, turtles, crabs, sea birds, and even other sharks.

It has also been known to eat terrestrial animals, such as horses, goats, sheep, dogs, cats, and brown rats, and there are even records of tiger sharks consuming songbirds!

It also scavenges for inedible, man-made objects that stay undigested in its stomach.

11. Its jaws have a unique shape and dentition

Unlike other sharks, it has a square, blunt form of jaw, rather than a round shape.

Its razor-sharp teeth are almost identical in both the upper and lower jaws, unlike most predator sharks which have fewer cutting teeth in the lower jaw. 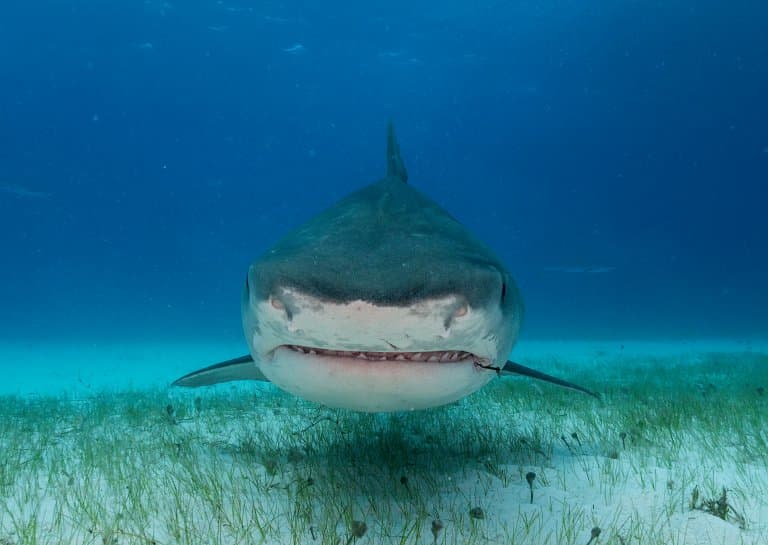 12. Its teeth can shear through flesh and bone

It has very sharp saw-like serrations on all its teeth, which have distinctive sideways-pointing tips.

This allows the tiger shark to slice through its prey, even cutting through hard turtle shells. As is the case for most sharks, new teeth replace worn-out ones throughout its life.

13. It is sacred in Hawaiian mythology

A tiger shark is considered to be a sacred spirit in traditional Hawai’ian culture, thought to be a reincarnation of a deceased family member.

14. It can go into a trance-like state when belly-up

Like other sharks, it becomes temporary immobile and enters a hypnotic state when turned on its back in the water.

It can enter ‘tonic immobility’ in less than a minute and can remain like this for up to 15 minutes. Scientists can thus gather information about an individual tiger shark and can implant a tracking device in its body. 4

15. The female is larger than the male

This is known as dimorphism. Exceptionally large females can reach more than 5m in length and 900kg in weight. A large male can grow to 4m in length.

16. It is the only species of shark that hatches fertile eggs inside its body and gives birth to live young

This is called ovovivipary: a pregnant female tiger shark lays 10 to 82 fertilised eggs inside her body, each egg containing an embryo which feeds on its own egg-yolk.

Then, the embryo hatches inside the female’s body where it continues its growth until the mother gives birth to fully developed live young, after a total gestation period of 13 to 16 months.

17. One male can sire a whole litter of pups

Recent research indicates that the 30 to 35 pups per litter are most commonly sired by one male, not by multiple males as was previously thought.

18. There are at least two different types of tiger shark

Genetic research reveals that there are two distinct populations, one in the Atlantic Ocean and one in the Indo-Pacific Ocean, which have not been interbreeding for a long time.

There is also evidence that tiger sharks from Hawaii are genetically different. 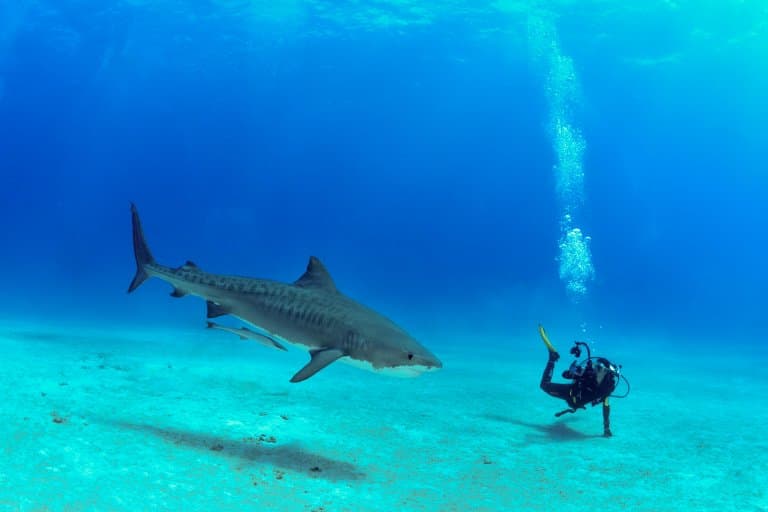 19. It is under threat from human activity

Human beings are reducing the tiger shark population by killing them for their fins, edible flesh, and liver oil rich in vitamin A, which is used to make supplements. In the past, its tough skin was used to make leather, which is still used for traditional Hawai’ian drums. It is also hunted for sport.

20. They are sometimes prey to killer whales

Though apex predators, tiger sharks are sometimes prey by groups of orca.