With a striking appearance and unusual behaviours, the gerenuk is one of the lesser-known antelope species. They are the sole members of the Litocranius genus.

They are located in Africa, have a long neck and are known as the giraffe gazelle. 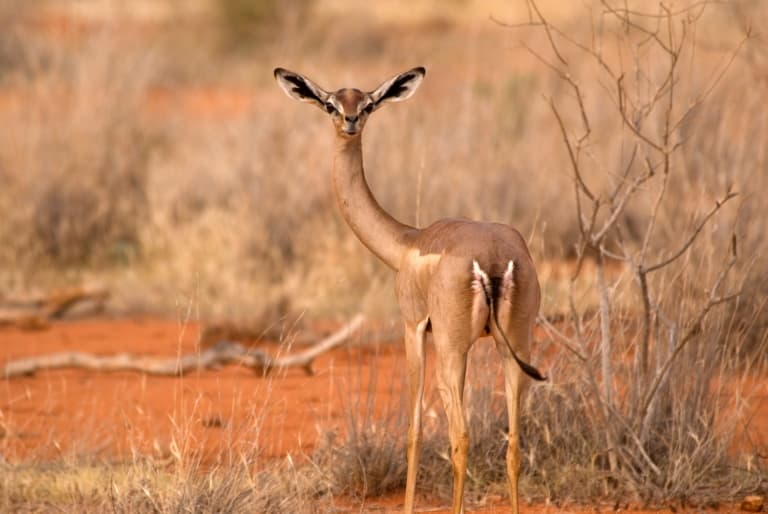 Gerenuks are a unique species of antelope known for their distinctive appearance and unusual physical features.

Both have similar appearances, habitats, and diets but live in different areas. These gerenuks are so alike that some scientists consider them the same species.

Gerenuks live in small herds between two to six members, are active during the day and typically spend most of their time foraging and feeding.

1. They look like a cross between an antelope and a giraffe

Some of the most notable characteristics of the gerenuk are its long, slender neck and thin legs. Gerenuks have also wedge-shaped skulls and shorter noses than many antelope species, lending them a giraffe-like appearance. 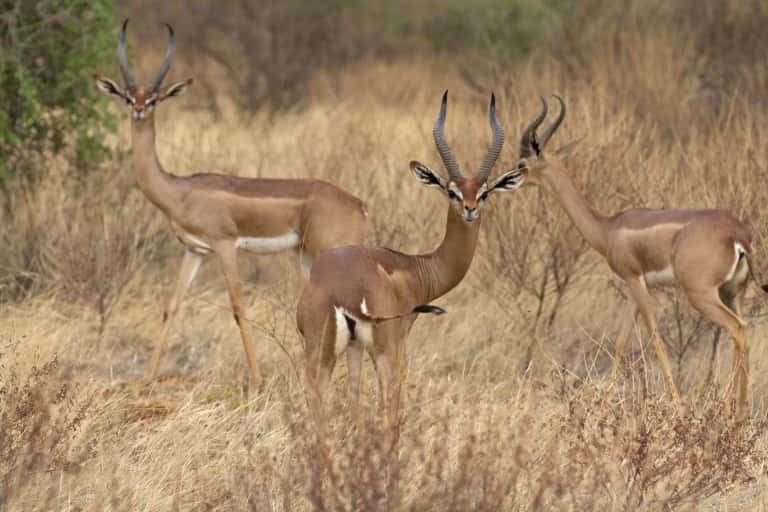 Gerenuks look so similar to giraffes that they were given the name garanuug, which means “giraffe-necked” in Somali. 1

3. They can stand up to find food

Gerenuk diets consist of plant matter from trees, bushes, and other plants. Unique structures in their spine allow them to stand upright on their hind legs to reach food as high as 2 m (about 6 feet) in the air. 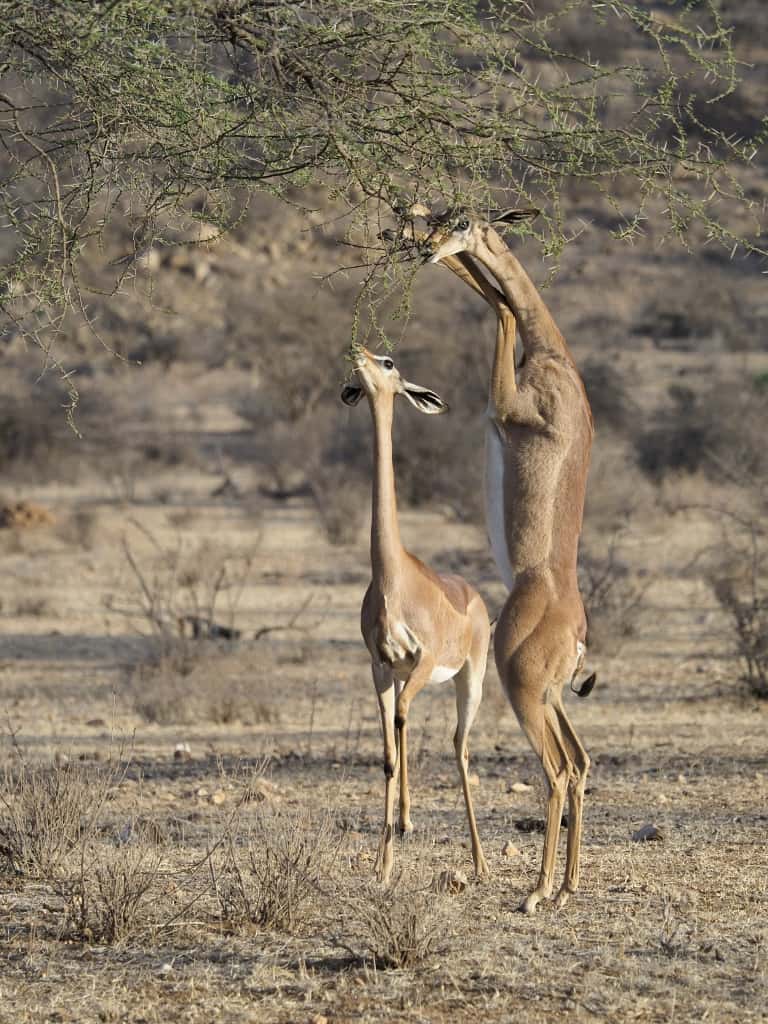 These animals get all the moisture that they need from the plants that they consume. Scientists studying gerenuks have observed them for weeks without ever seeing them drink water. 2

5. They are surprisingly fast

Gerenuks are prey for lions, cheetahs, hyenas, and other African carnivores. To escape these predators, gerenuks can run up to 64 kilometres (about 40 miles) per hour. 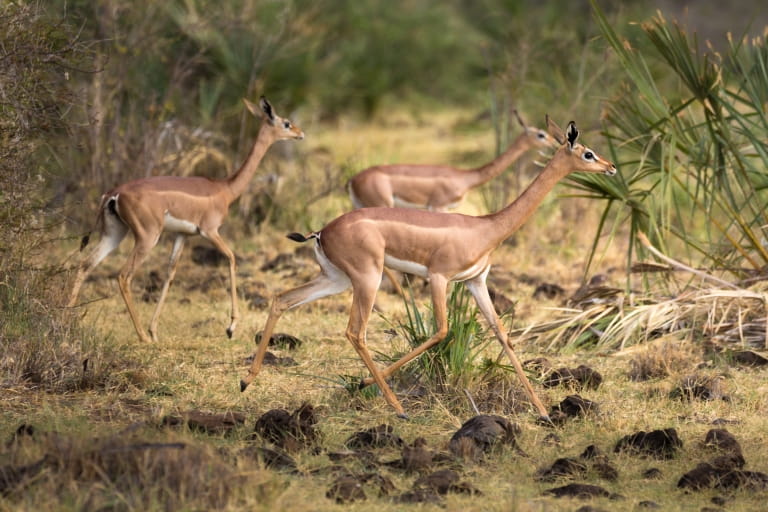 6. Only males have horns

The ridged, curving horns that help give gerenuks their distinct appearance are only found on males. Female gerenuks have small, smooth bumps on their skull instead. 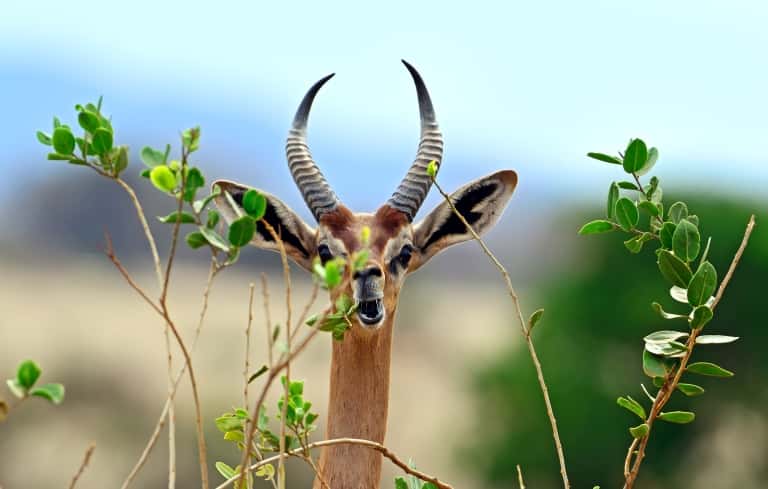 7. They mark their territory with tar and urine

Male gerenuks secrete a thick, tarry substance from ducts near their eyes. They then wipe this fluid on trunks and branches to alert other males of their territorial boundaries. Male gerenuks also urinate to mark these boundaries. This method only discourages other adult males; female gerenuks and their fawns can move freely through a male’s territory. 3

Many animals use scent to mark their territory. However, unlike most animals, the scent glands of a gerenuk are located behind their knees and inside their hooves. These glands also play a role in reproduction, as they produce pheromones that can help gerenuks attract a mate. 4

9. They have a natural defence against thorns

Gerenuks must forage through spiny bushes to find the leaves that make up the bulk of their diet. Their large eyes are vulnerable to scratches or other wounds from sharp thorns. The gerenuk’s long eyelashes protect their delicate eyes from injury as they search for food.

10. Gerenuks can live up to 13 years in captivity

In nature, gerenuks generally reach about 8 year of age. However, without pressure to find food and avoid predators, captive gerenuks can live much longer than their wild counterparts. 5

11. Their mating behaviours are unusual

As gerenuks prepare to mate, the female will raise her nose and pull her ears close to her head. The male will then present his long neck in the hopes that the female will choose to mate with him. Before mating, the male will wipe the female with the scent glands near their eyes and sometimes tap or even kick the female gerenuk in the stomach with his foreleg. 6

If you observe a group of gerenuks in the wild, they are almost always adult females and fawns. Male gerenuks leave their maternal groups when they reach sexual maturity. From that point on, they remain solitary, interacting only to defend their territory from other males or breed with females. 7

Gerenuk breeding happens year-round, and most mothers have only one fawn at a time. Female gerenuks remain pregnant for about 7 months. The newborns are able to stand within minutes after birth. 8 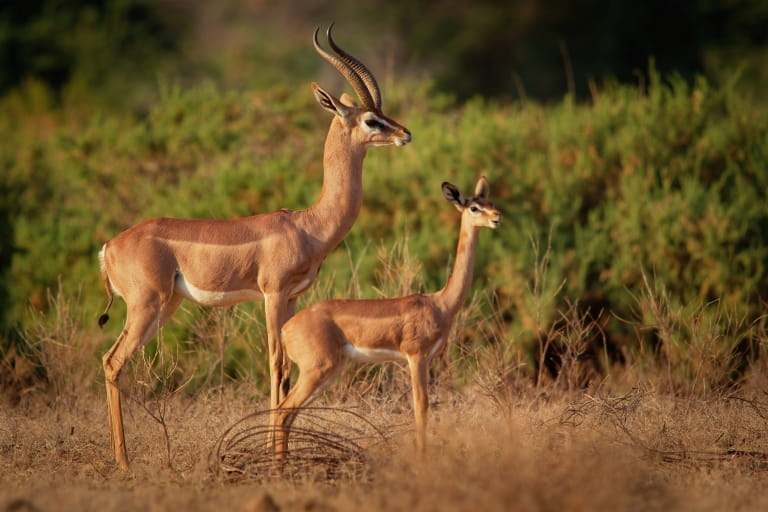 14. Hiding is the key to gerenuk fawn survival

Despite their ability to move independently soon after birth, delicate young gerenuks are vulnerable to predators and dangers in the environment. They spend much of their early months hiding in trees, bushes, and piles of leaves and grasses for more than 9 hours a day. Their mothers forage for food while they remain safe. After each nursing period, both mother and fawn move to a new area. 9

15. They have a vocabulary of their own

All gerenuks regardless of age or sex communicate with a series of vocalizations. Each sound has a distinct meaning among gerenuks. Loud bleating indicates danger and helps alert other gerenuks. Mothers bleat softly to their young. A whistling noise indicates irritation or annoyance.