Echidnas are some of the most unique animals in the world. They are sometimes referred to as ‘spiny anteaters‘ and their unusual appearance and characteristics have fascinated scientists for hundreds of years.

They are monotremes, which are mammals that lay eggs and whose ancestor is thought to be acquatic like the platypus. 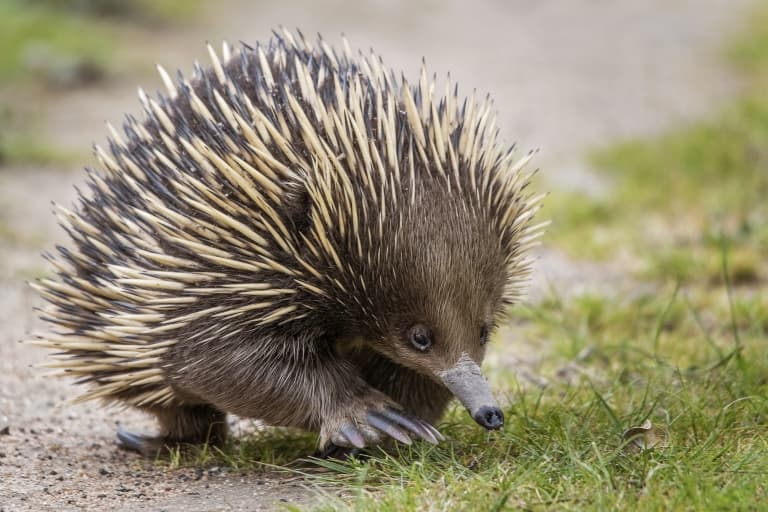 Despite their similarities in appearance to anteaters, armadillos, and porcupines, echidna belong to an entirely different order (Monotremata).

3 out of the 4 species are vulnerable or crticially endangered according to the IUCN.

1. These mammals can lay eggs unlike most mammals

Most mammals are placental, which means that their young develop inside of their bodies and are born fully developed. In contrast, echidnas lay eggs (usually a single egg at a time) and incubate them until they hatch.

2. Echidna make up of 4 of the 5 surviving species of monotremes

In addition to the 4 species of echidnas, the order Monotrema contains a fifth species: the duck-billed platypus (Ornithorhynchus anatinus). Many other monotremes have existed throughout Earth’s history, but most are extinct.

These unusual animals are difficult to observe in the wild due to their solitary and shy nature. When echidnas encounter a larger animal or face danger, they hide in piles of leaves or grasses or crawl into underground burrows. 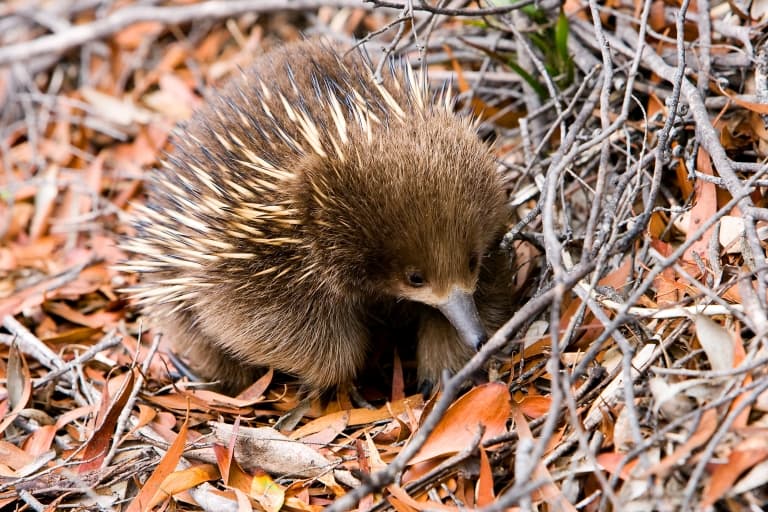 4. They have aquatic ancestors

Although echidnas live primarily on land, they evolved from aquatic monotremes. Scientists used molecular evidence and fossils to determine that these ancient ancestors swam in oceans about 112 million years ago. Echidnas and platypuses evolved soon after. Because of this, echidnas are sometimes known as “living fossils.” 1

Their primarily terrestrial lifestyle doesn’t keep echidnas from taking the occasional swim. They seek out bodies of water in which to groom and bathe.

The exact source of the name echidna is still up for debate. However, these animals do share their name with a monster from Greek mythology that had the torso of a woman and the tail of a snake. Some scholars think that the animal’s name may also have come from the Ancient Greek word ἐχῖνος, meaning “hedgehog” or “sea urchin.” 2

7. Echidnas are covered in quills

One of the echidna’s most notable characteristics are the short, sharp quills that cover their body. These quills are made of keratin, the same material that makes up hair, claws, and fur. The keratin proteins harden into spikes that protect the echidna from harsh conditions and predators. 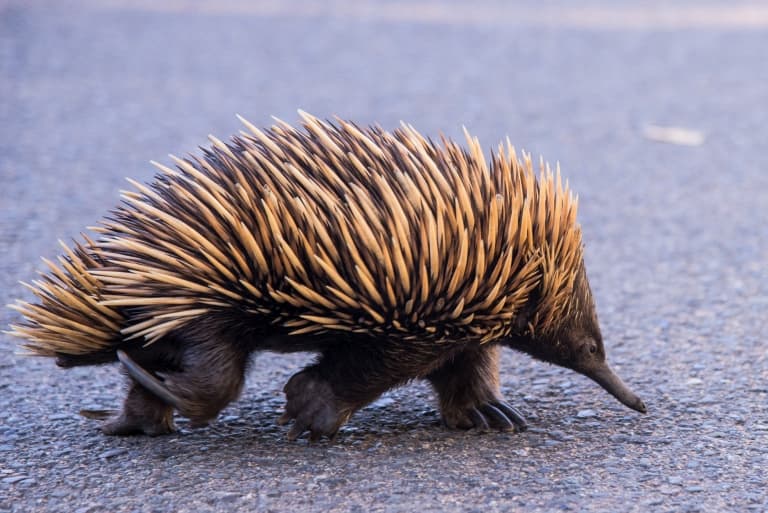 8. Their tongues are the key to their diet

Termites, ants, and other insects make up the bulk of the echidna’s diet. To find them, echidnas use their long, sticky tongues to reach into burrows and tunnels in search of food.3 Some species, such as the short-beaked echidna, use their long snouts to break up logs and termite mounds. Echidnas have no teeth and must grind their food between their tongue and the bottom of their mouth before swallowing it. 4

These unusual animals dig burrows using their large claws and broad feet. Their front feet have 5 claws that can be used to dig through leaves and dirt, while their hind feet face backwards and kick soil away from the burrow as the echidna digs. 5

Similar to platypuses, male echidnas have a hollow spur on their hind limbs. Unlike platypuses, however, this spur is not poisonous and poses little danger to other animals. 6

11. They produce milk from patches of skin

All mammals have mammary glands and produce milk that is used to feed their young. Most mammals do this through teats, but echidnas have small “milk patches” instead. Young echidnas suckle on these patches and draw milk through pores in the mother echidna’s skin. 7

In yet another example of unusual anatomy, these mammals have a feature usually seen on birds and reptiles: a cloaca. This orifice connects an echidna’s digestive, urinary, and reproductive tracts. An echidna urinates, defecates, mates, and (in the case of females) lays eggs through the same opening.

13. Female echidnas carry their eggs in a pouch

Female echidnas usually lay a single egg at a time. Shortly after the egg has been laid, the mother transfers the egg to a pouch on her ventral (stomach) surface. She incubates the egg for 10 to 11 days until it hatches. After hatching, the young echidna either travels with the mother in her pouch or remains in a burrow while she forages for food. 8

After a puggle hatches, its quills and spine are not fully formed. Its skin is soft and smooth, and its claws are small and fragile. After several months in its mother’s pouch, the puggle emerges with the distinct appearance of adult echidnas. 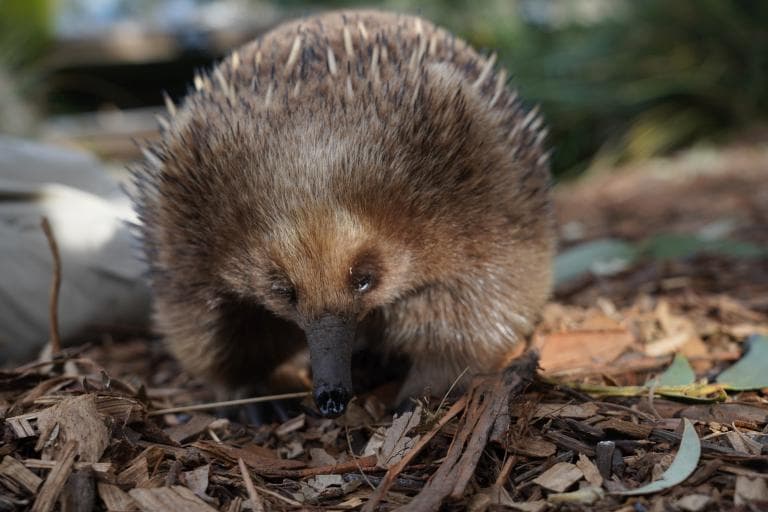 15. They build nurseries in burrows

For the first 5 months of its life after hatching, young echidnas spend much of their time in protected underground burrows. There, they remain safe and hidden from predators while their mother searches for food, returning every 3 to 6 days to feed her young. As the young echidna grows and begins eating insects rather than milk, these return visits become less frequent. Once the puggle is old enough, the mother stops returning to the nursery burrow and the puggle can live independently.

16. They can sense electricity

Scientists have discovered that echidnas are able to detect electric fields, a sense called electroreception. In a 1989 experiment, echidnas were shown to be able to differentiate between 2 different pools of water, 1 of which was conducting a very small amount of electricity. Although it is unknown what kind of electric fields echidnas encounter in the wild or how electroreception benefits them, they remain the only known animal to have this sense. This is just one more reason why echidnas are unlike any other animal on Earth. 9

17. They don’t often breed in captivity, but that’s changing

Echidnas have complex mating rituals. This, combined with their shy nature, makes a zoo environment less than ideal for mating. However, scientists at institutions such as Australia’s Taronga Zoo have learned how to optimize echidna enclosures and encourage natural behaviours such as breeding. In 2016, the Taronga Zoo celebrated its first echidna births in 29 years when eggs from 3 separate mother echidnas hatched within days of each other. 10 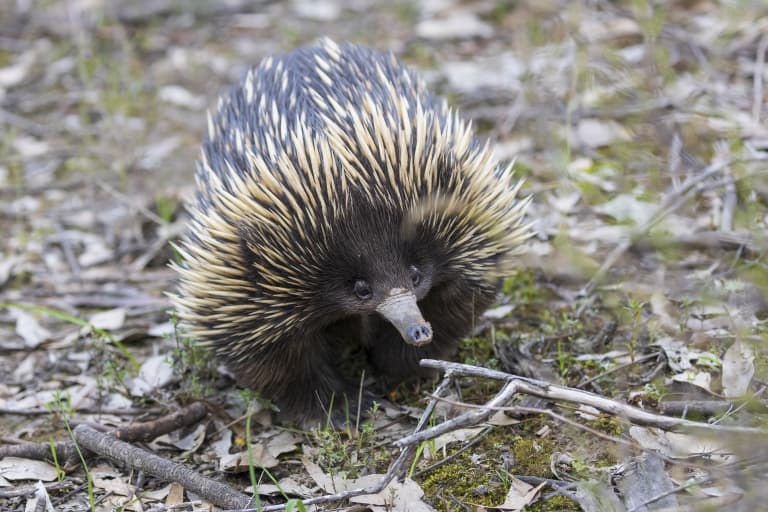