The platypus (Ornithorhynchus anatinus) is a semi-aquatic, egg-laying mammal that is native to Australia, and often referred to as the ‘duck-billed platypus’.

It’s famous for its odd appearance, with a duck-shaped bill, a beaver-like tail, and the feet of an otter. They are so odd, that the first scientists to encounter them thought they were fake. 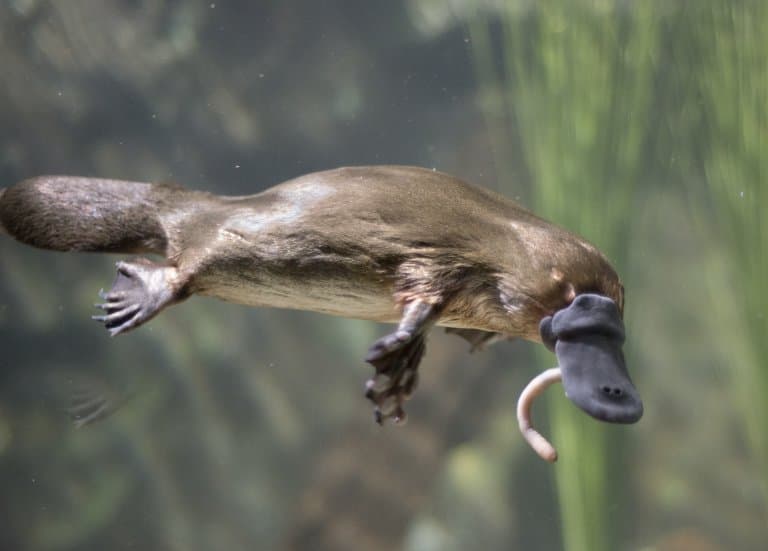 They are native to Eastern Australia, ranging from the colder highlands to tropical rainforests. They inhabit small streams and the surrounding areas. They spend most of their time in the water, but also have burrows in the side of riverbanks where they rest.

They hunt fresh-water crustaceans, such as shrimp and crayfish. They hunt using their bills which sense both movement and electric signals produced by moving animals. Their predators include birds (hawks, owls, and eagles), snakes, water rats, goannas (a large lizard), and crocodiles!

Life span is around 17 years in captivity, but it’s thought to be less in the wild.

Platypus are rare, elusive and were historically extensively hunted for its fur. However, they are now a legally protected species in Australia.

They are classified as near-threatened by the IUCN, which has recommended that it is upgraded to a threatened species, due to habitat destruction and declining numbers in all states.

The appearance of platypuses is so odd that the first European naturalists who studied a preserved one thought they were fake and made of other animals stuck together. 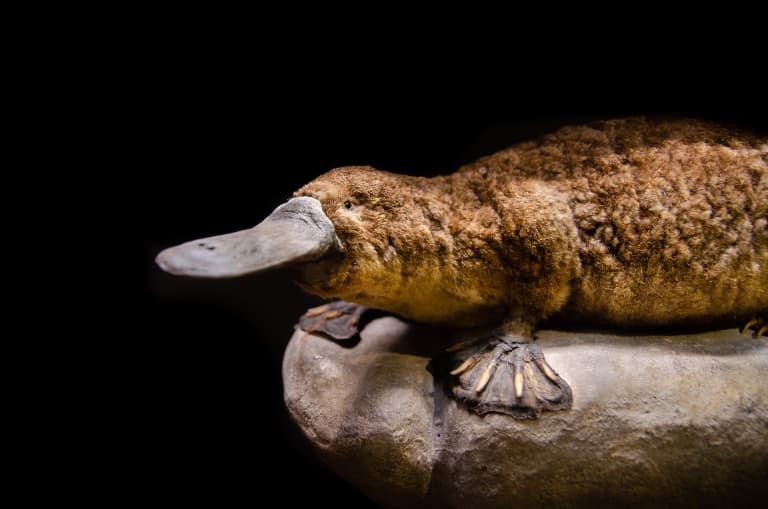 2. They are part of a group called “monotremes”.

This is one of the three main groups of living mammals. This group contains only 5 species still alive today: platypuses and 4 species of echidna. Echidna are spiny anteaters.

3. There are only two kinds of egg-laying mammal left on the planet today.

Almost every mammal gives birth to live young, except for the platypus and echidna. Both lay eggs, which later hatch live young. 1

This means that they live both in water and on land. They are well-adapted for this, with webbed feet for swimming and fur that is waterproof to keep them warm.

5. Their large beaver-like tail is used for fat storage. 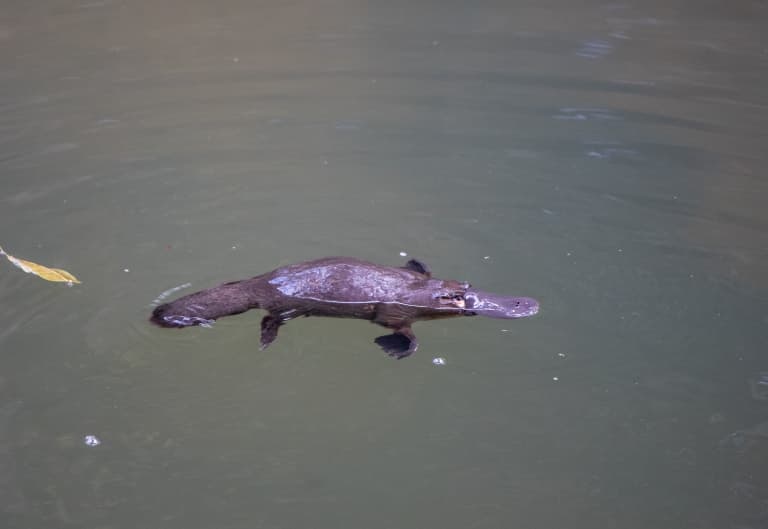 Males have an ankle spur that delivers venom strong enough to kill dogs and cause excruciating pain in humans.

They are one of the very few mammals that use electroreception, aka the ability to sense the electricity created by the movement of muscles.

They use this to hunt prey hiding in the mud of stream floors. The receptors for this are found in their bill.

8. Platypus don’t use sight or smell for hunting.

When they hunt their nose, eyes and ears are closed. They swim along the bottoms of steams, using the electroreceptors in their bills to find their prey.

9. They don’t have stomachs.

Like fish, they don’t have an acid-producing stomach. Instead, their gullet goes straight to their intestines.

Their duck-shaped bills don’t have teeth. Instead, they use gravel to grind down their food.
They store both food and gravel in their hamster-like cheek pouches which they take to the surface to munch on. 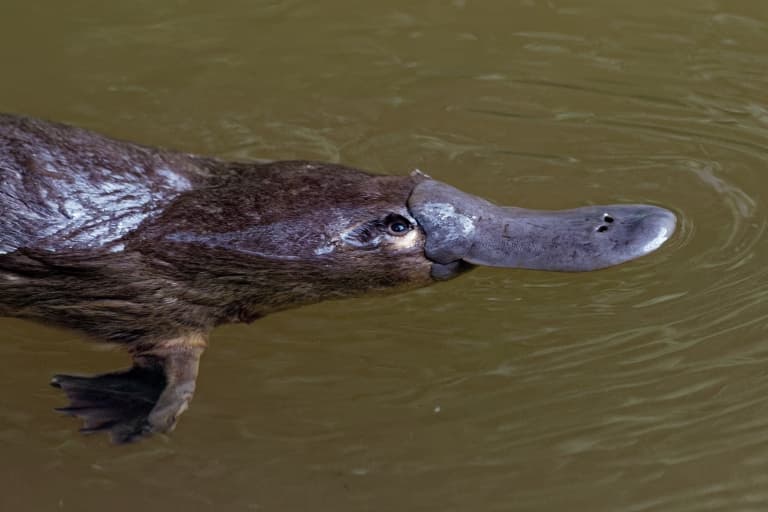 Amazingly, just last year (2020) scientists discovered that they are biofluorescent. This means under a blacklight they glow! No one knows why yet. 2

They hatch from their eggs using an egg tooth, are completely blind and hairless.

13. They produce milk, but don’t have nipples.

Females have mammary glands for milk production, but no teats. The milk emerges from pores in the skin of the abdomen which the puggles then lap up.

14. They are important in Australian aboriginal culture.

One story describes how all the other animal groups (land, water, and air) wanted the platypus to join one of them. However, the platypus decided it was special enough on its own and it didn’t need to be part of any group to be special. 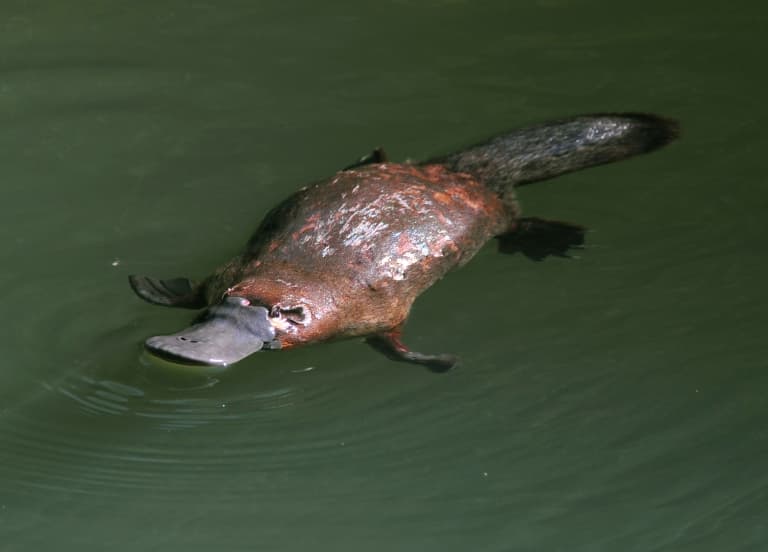 15. There used to be platypuses that were over three feet long.

A single prehistoric platypus tooth found in 2013 showed researchers that there used to be platypuses that were over 3 feet long. 3

16. They have DNA from reptiles, birds, and mammals.

In 2008, the full genome of the platypus was analysed. They found lots of amazing information, like the fact that they have shared DNA with reptiles, birds, and mammals. This kind of makes sense with their odd appearance. 4