The Afrikaans language refers to a type of pig that digs its way into termite mounds and sucks out the individuals inside.

This “earth pig” has powerful tearing claws and a forceful set of hind legs to push its way in. It also has rabbit-like ears, and a tail like a kangaroo!

This is the Aardvark, and it’s an odd-looking mammal from Africa that, despite its name, isn’t really related to a pig at all. 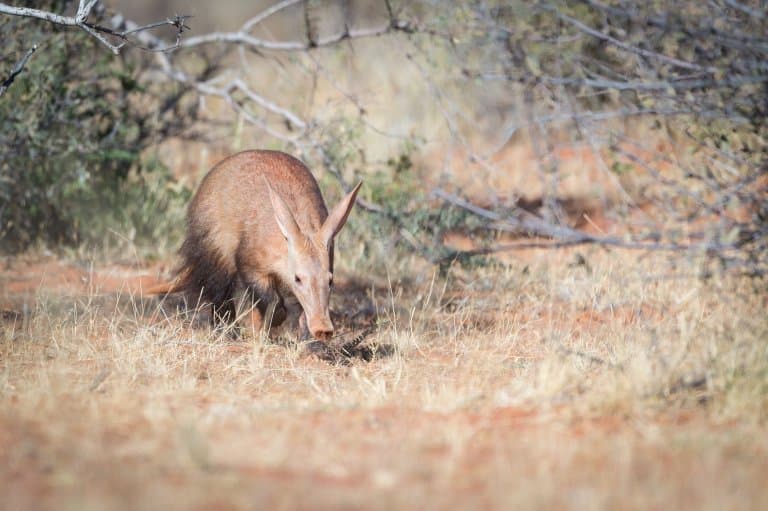 Aardvark inhabit most countries in middle and southern Africa, where they roam savanna and grasslands for food, and dig large burrows in the ground to live and breed.

Aardvarks have a number of unique peculiarities. They’re the first mammal in the dictionary, they can’t open or close their mouths, they have primitive, but well-adapted brains and their babies come out looking like saggy, wet donkeys.

While they’re primarily termite-eaters, they have a guilty subterranean pleasure that they enjoy when they think nobody’s watching.

And for good reason. These animals are quite pig-like in appearance, and spend a lot of time snuffling and digging in the ground.

However, despite the name and appearance, they are an entirely unrelated order called Tubulidentata.

This lineage, as it turns out from detailed analyses of the brain and musculature, is thought to have descended from a primitive form of the hooved animals.

Despite appearing like an anteater and sharing some characteristics, their closest living relatives are elephant shrews, tenrecs and golden moles. 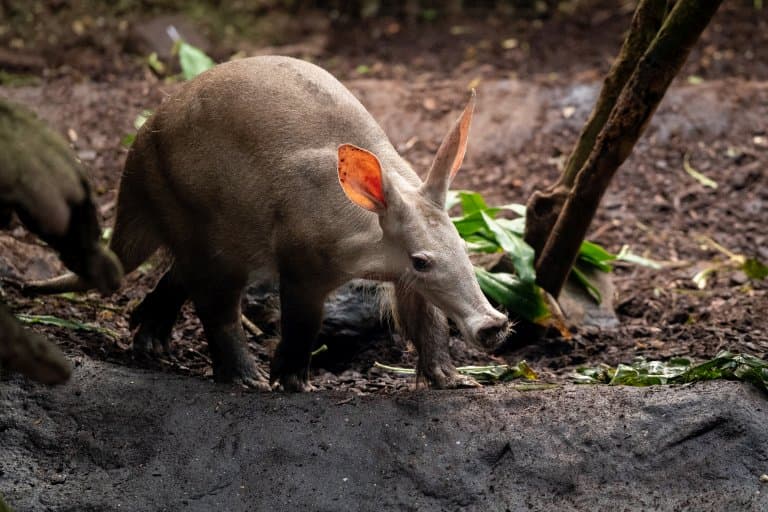 2. Aardvarks are also named after their long mouths

This name refers to the jaw of the aardvark, which is fused all the way along, into a relatively toothless tube.

While they do have teeth, these are poorly formed and have no enamel cover or roots, so they’re mostly vestigial. 1

3. They’re well adapted for the heat

Aardvarks have spare body hair, with each follicle grouped into clusters of three or four.

They have tough skin that protects them from pests, and their large, flappy ears help them stay cool by acting as heat sinks.

4. They are solitary animals and nocturnal feeders

Aardvarks really don’t spend a lot of time around one another. They tend to roam around on their own, and only come together when it’s time to mate. They don’t even seem to be particularly territorial, tending to tolerate other individuals in the same area without a fuss.

They also spend more time active at night, during which time they are said to be able to consume up to 50,000 ants and other insects. However, much smaller aardwolves are known to harvest up to 300,000 termites per night, so this value may be a misprint and could represent an order of magnitude more termites. 2

5. They can burrow at an alarming rate!

Since these are digging animals, they tend to avoid rocky outcrops. When digging burrows, they’ve been known to be able to dig 60cm (2ft) in just fifteen seconds. They dig these burrows for shelter and to hide their young.

As such, they prefer loose soils, without too much risk of flooding. Wetlands are a no-go, but flood plains are almost perfect, as long as it’s not the rainy season! 6. Their burrows help save other animals lives

Aardvarks dig a number of burrows to aid as refuge when foraging. These extra burrows are used by other animals during wildfire season, where they might otherwise die from fire.

Hyenas, wild dogs, mongoose, pythons and even lizards all have the aardvark to thank for saving their lives and giving them refuge.

7. Aardvarks have four toes on their front feet and five on their back feet

Each toe has a large nail, and they look somewhere between a claw and a hoof, which help them dig.

These incredible digging machines are also aided by particularly coarse bones, which allow them to cope with the strain of burrowing. 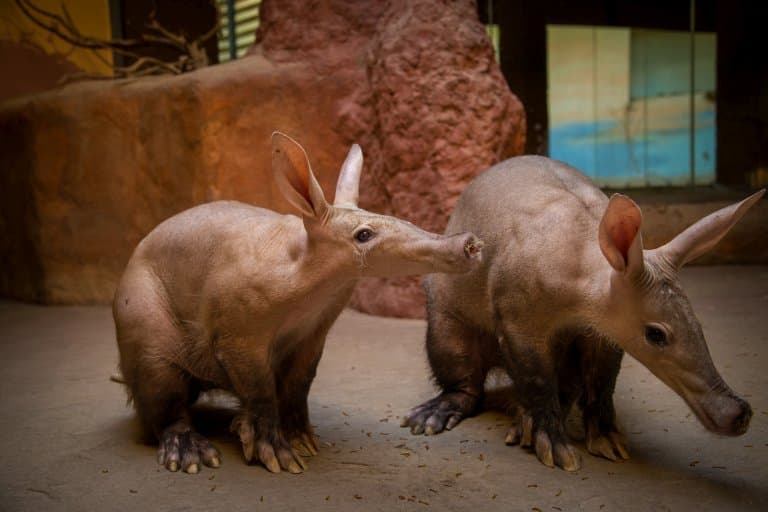 When looking for food, a foraging aardvark will trot in zig-zags across areas of around thirty meters, continuously sniffing the ground. Now and then they’ll quickly dig a little reconnaissance trench to investigate the possibility of termites.

Once they’ve found these, they attack with a 45cm-long, sticky tongue, where they are transported to the feeding tube and scraped off into the mouth. They commonly push their entire snouts into termite mounds to do this, leading people to believe that aardvarks suck termites out of their homes.

Depending on the availability of these termites, an aardvark may travel a long way to feed in one night. They’ve been known to travel 30km on these hunts, particularly in their more active, warmer months when they may be hunting from 19:30 to almost 06:00. From May to August, they are generally less active, stopping their patrols around 01:30.

9. Aardvarks have an exceptional sense of smell

This might not come as a surprise, considering the Aardvark head looks to be predominantly nose.

However, the brain is also adapted for an improved sense of smell with an enlarged olfactory bulb. Inside that huge snout is also a labyrinth of bone structure with immense surface area for accessing chemical scents.

They also have a series of fleshy appendages on the end of their noses, much like the star-nosed mole, and probably for the same reason. These sensory adaptations allow the aardvark to sniff out termite mounds over long distances. 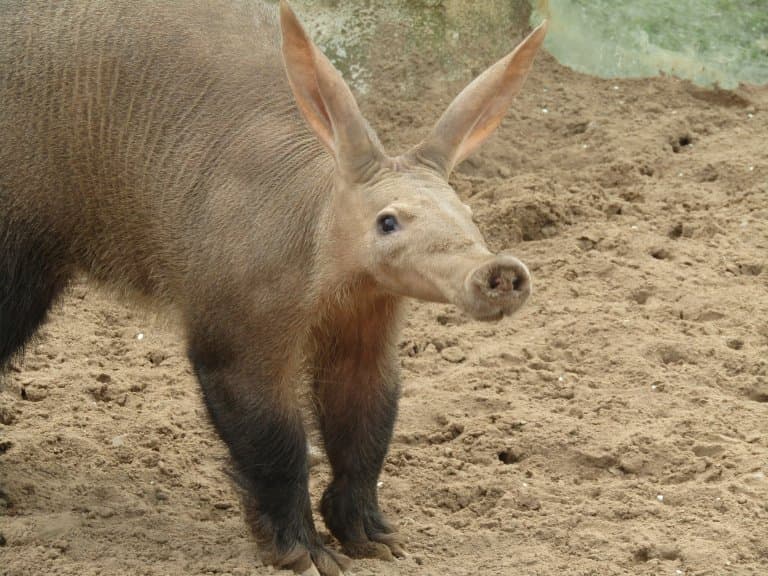 10. They’re a fan of cucumbers

Aside from termites and other insects, aardvarks have been known to partake in a member of the gourd family, consequently named the “aardvark cucumber”. In fact, this gourd seems to only be eaten by aardvarks, who then disperse the seeds, unaffected by their digestion, around the area.

The fruits grow under the ground and are excavated by aardvarks. Nobody really knows what’s in them that the animal benefits from, but it seems to be the only vegetable they like, despite other nutritious plants in the area.

After eating the fruit, the seeds pass through into the faeces of the aardvark, buried just below a thin layer of soil, where they can still receive enough light to germinate. If left in the ground, the seeds will not germinate, suggesting that the cucumbers need the aardvark to reproduce.

As such, the plant and the aardvark seem to have a symbiotic relationship, in which both require the help of the other. 3

11. Aardvark babies look a little like Dobby from Harry Potter

They have droopy ears, with hairless and wrinkled skin. So cute!

12. They’re thought to be declining in number

While they are classified as ‘least concern’ by the IUCN, their population is thought to be declining. However, because the aardvark is elusive, it’s hard to know their real numbers.

While they are not considered common across Africa, they do have a very large range, which should help protect them from region specific issues.