You’re in a kayak on the Yangtze River in China, looking for a place to set up camp for the night. Scanning the reeds. You spot a pair of dark eyes, sitting ominously above two large fangs, glaring at you through the misty twilight.

Perhaps it’s better to take your chances with the Baiji and alligators in the water, you may think. But tigers are extinct in these parts, and vampires haven’t been seen outside Transylvania since Blade 2 came out. So, when this tusked voyeur lets out a bone-chilling bark, does that make you more or less comfortable?

The water deer is a species of fanged, or “vampire” deer that occupies riverside swampy areas in China and Korea. 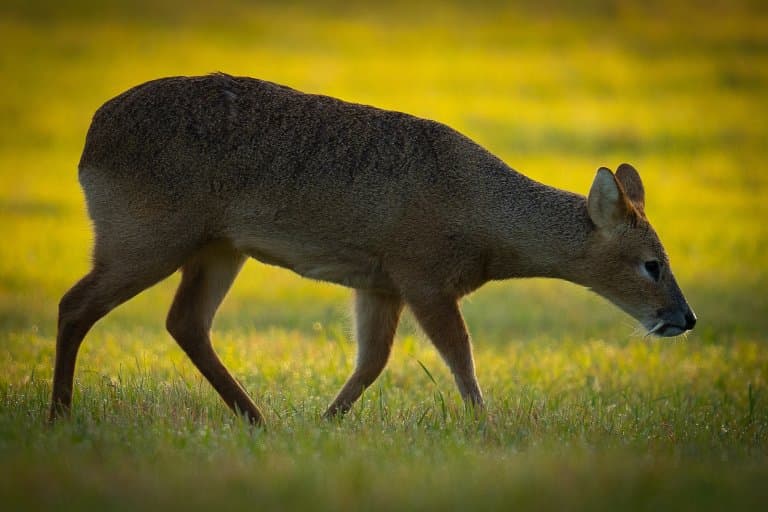 It’s relatively small for a deer, and much like the tufted deer, Elaphodus cephalophus, sports some serious weapons on its face. These make up for its lack of antlers and provide this Cervid with a way of defending its territory and competing for mates.

Water deer inhabit land alongside rivers and feed at dawn and dusk and like to diet on grasses, weeds, herbs, and reeds. They particularly like the vegetation that grows along the bottom of rivers and where the tall reeds help protect them from sight of predators.

Populations were once widespread in China and Korea, but sadly populations have declined significantly, and now 40% of the individuals of the genus are invasive to Europe.

This isn’t unusual for a deer, really. Deer have a number of strange calls, but many of them don’t back them up with the same intimidating gnashers as the water deer, and it can catch you off guard if you don’t know it’s coming.

Water deer bark as a warning, and when alarmed, but in other contexts, they may emit a chatter, whistle or squeak. Oh, and if they’re chased, they can scream. 1

2. They’re a silent beneficiary of the Korean war

When humans and other animals claim the same space as home, the humans rarely come off worse. But when humans fight one another for land, they often inadvertently create sanctuaries for these other animals; areas in which there is little to no human activity, and where the rest of the world can live in relative harmony.

The Korean war resulted in a large strip of land between the North and South, acting as a demilitarised zone between the combative parties. This land has been left mostly undisturbed by human hands for almost 70 years and is now home to some of the most threatened animals in Asia, including the water deer.

While the Chinese subspecies is critically endangered, the Korean water deer is thought to have a population over 700,000 throughout South Korea. 2

3. Their canine teeth can grow up to 8cm in length

Water deer fangs aren’t just doe show, either. The scars and missing pieces on the face of many males suggest that fights are very common.

These are typically solitary animals and will defend their territory aggressively. 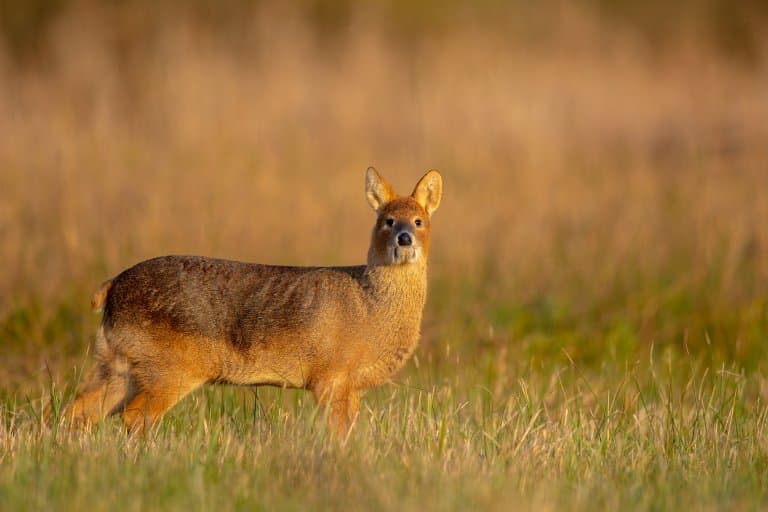 4. There is a British population

Having escaped from private collections in around 1929, the water deer has set up small enclaves in the South and East of the country. Norfolk has the largest population, due to their preference for endless swathes of featureless wasteland and plenty of watery grasslands. So, if the Ouse is a little closer to home, you might think of kayaking that before you jet off to the Yangtze to find these deer.

Water deer in the UK are listed as an invasive species, but they’re also protected from shooting, so there is some confusion about whether they’re welcome in Britain or not.

However, they don’t seem to do a lot of damage to crops, interfere with other deer species, or cause any harm whatsoever, so they may be reclassified as naturalised in the future. 3 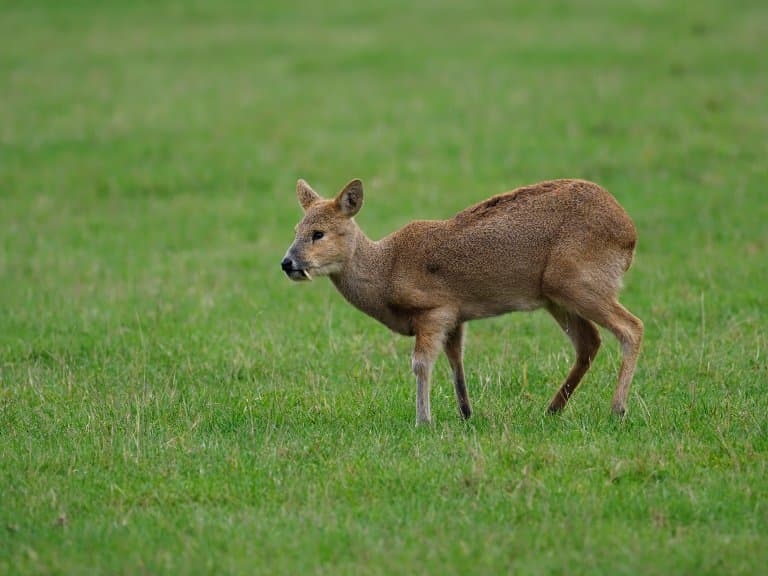 Researchers have found them to be proficient swimmers, capable of swimming for hours to reach small remote river islands.

6. They have a lot of babies

It’s quite unusual for deer to give birth to more than two young, but the water deer commonly has three. It can even have a full litter of six fawns; many of which will die.

Infant mortality rates are as high as 40% in the first few weeks, which goes some way to explaining why they need to birth so many.

This is also the reason for the slow spread of these animals, and their vulnerability to unstable habitats. It will take a while to develop a better understanding of the impact of these deer on local wildlife, but so far, it looks like they may be a welcome addition to the British fauna.

7. They carry a lot of plants in their poo

The Korean water deer is much more dominant than other populations worldwide. It’s so significant to its ecosystem, in fact, that it can disperse at least 35 plant species over its territory.

The seeds of these plants survive the rumination process and escape in the faeces of the deer, setting up where they’re dropped off to germinate and grow.

These plants are usually forbs, with no apparent dispersal adaptations. This suggests that they have evolved alongside the deer, or others like it, and have a mutually beneficial, or commensal, relationship whereby they provide food for the deer, and the deer provides dispersal services in return.

Seed dispersal of over 100m is an important indicator of genetic diversity, which suggests that the Korean water deer is a very significant species to the ecology of its habitat. 4

8. They run with rabbit-like jumps

This is because their hind legs are far more powerful and longer than their front legs.

9. The European population may be unique

When a small population of a species migrates, gets cut off from the rest of its population or is otherwise introduced to a region, there’s a sudden genetic bottleneck that is forced upon it. In the case of the escaped European water deer, this has resulted in a genetically distinct variant from the Chinese ancestor, which, as far as we know, is now extinct.

This means that the European populations may be evolutionarily diverging from their native ancestors, and could be reclassified in the future. However, the genetic diversity in these introduced species is a lot lower, meaning that unfortunately, they’re far more vulnerable to extinction than their Asian counterparts.

10. They are hunted for ‘colostrum’ which is used in folk medicine

Colostrum milk is secreted for a few days after the deer gives birth and has high protein and antibody content, which is used in traditional Chinese medicines. 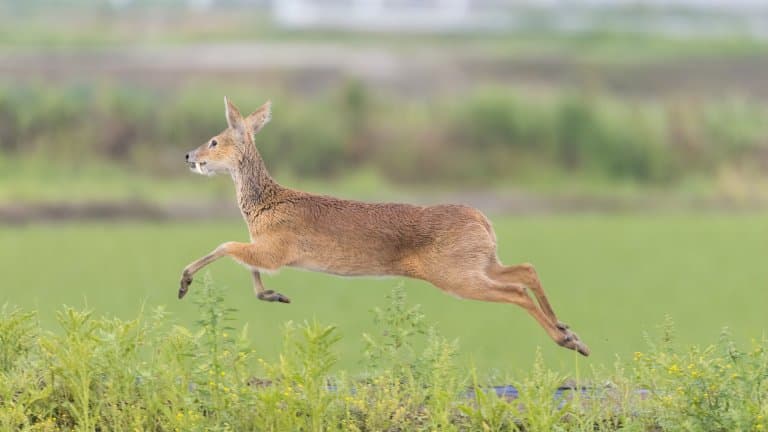 The Chinse water deer subspecies are now extinct in Southern and Western China.

They are heavily hunted in the wild and only found in small populations in the lower Yangtze Basin of east-central of China.

There are estimated to be less than 10,000 Chinese water deer in the wild today.