Someone, somewhere, once discovered a small deer in Asia with enormous fangs and curiously decided to name it after its hairstyle.

This tiny deer, despite sharing a family (and subfamily) with the huge and charismatic red deer, Cervus elaphus, appears to have put all its character points on weird. 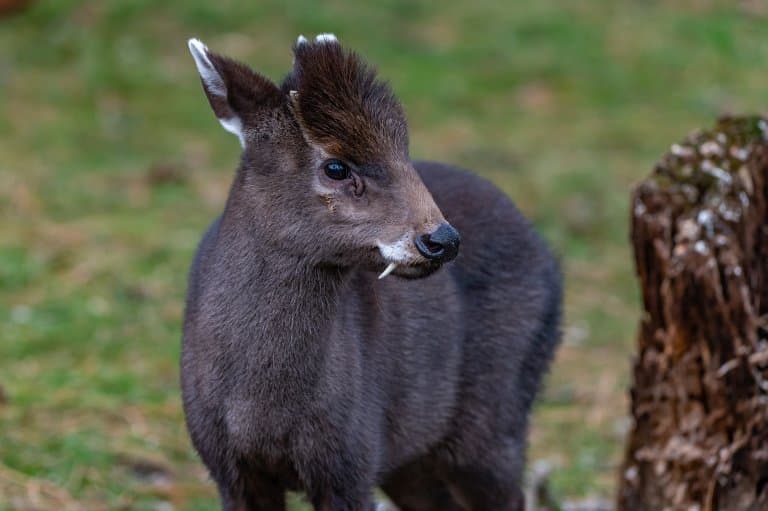 The tufted deer is the only member of its genus, currently reducing in numbers due to habitat destruction. They are mainly found in south China and Tibet in forests with fresh waster supply.

There are 4 subspecies of the tufted deer, although as always there is doubt about whether one subspecies should have that status.

Tufted deer are herbivores and diet on leaves, twigs, fruit and grass.

They are mainly solitary, but do sometimes live in pairs. The male tufted deer is called a stag, buck or bull, while females are known as a doe, hind, or cow. Baby tufted deer are called fawns or asses.

They’re hunted by locals and are in danger of becoming extinct if their populations aren’t intelligently managed. Fortunately many good research zoos are doing their best to take care of their genetic diversity, although their habitats remain under threat from deforestation.

These cute little weirdos are a very primitive form of deer with some surprising taxonomic connections, closely resembling the ancestors of more familiar-looking deer, whose antlers are better developed and who can better see over a small anthill.

This has to be the first thing you’re wondering. When animals have big teeth, it’s either for feeding, fighting, or.. making babies. For example, lions need large canines for hunting and eating, so they’re present in both sexes.

Tufted deer, on the other hand, only present with these fangs in the male, which gives us a clue about why they exist. Usually, when only one sex has something large coming out of them, it’s either a sex thing or a fighting thing, and the latter is usually just a sex thing with extra steps.

Male deer, as we know, often fight for females with their large antlers. Tufted deer have rather pitiful antlers, so during mating season, they compete with their teeth. They can grow over 1inch in length, so are sizable weapons.

Incidentally, when an animal has teeth that protrude out of their mouth, they’re called tusks. But we’ll go with fangs here because it sounds cooler. 1 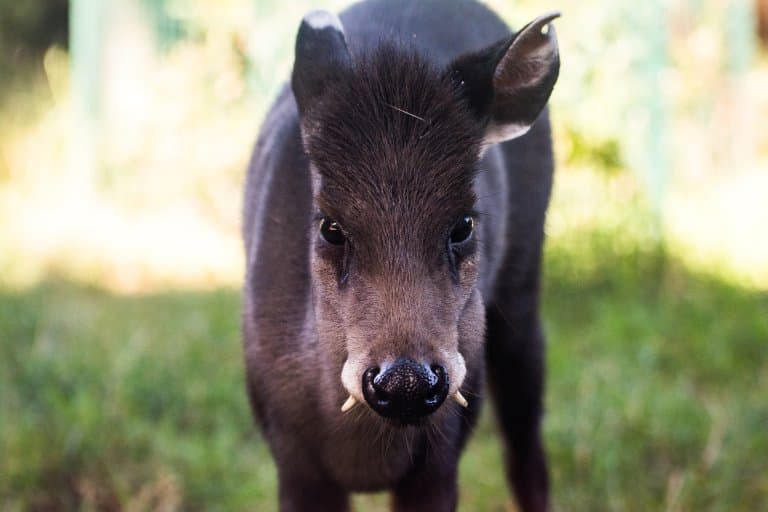 In evolution, pretty much everything happens for a reason. Unfortunately, that reason is often totally mysterious to us. What we know about deer, is that they descended from tiny little, simple-antlered dwarfs into the enormous, crowned harts we’re familiar with through a long evolutionary process of sexual selection.

Tufted deer are relatively primitive in that sense, much more closely resembling the old models. It could be that the tuft acts much like a human’s head of hair, or a horse’s mane; to keep its head warm.

Over time, these were lost in favour of the complex, fighting ornaments of modern deer. So far, however, it doesn’t look like we know for sure. 2 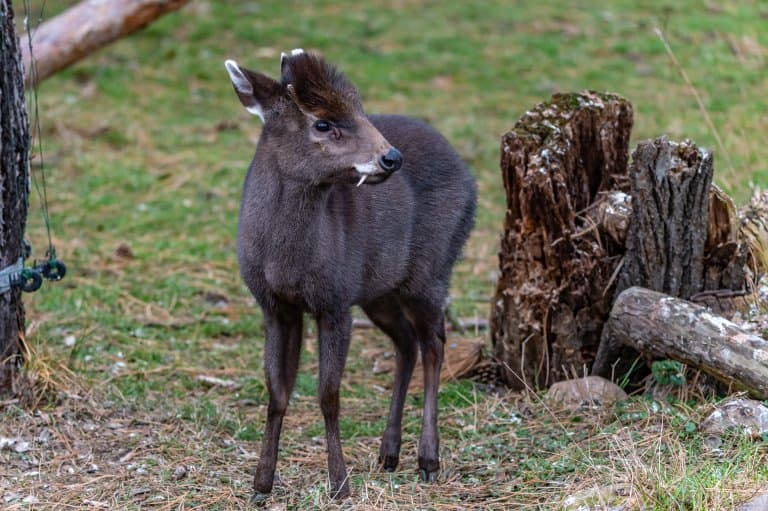 Tufted deer have a decent range of vocalisations depending on the context. When in a new situation and in social interactions, they produce an inquisitive ‘click’.

They also bark, whine and whistle as the situation dictates. 3

Despite being solitary, they’re apparently quite a tolerant species. Zoos are able to house them with other animals without too much trouble, including red pandas, who sit above them in the branches and would naturally share a habitat with the tufted deer in the wild.

Other animals the deer have no qualms with include the golden tarkin, and the black-necked crane, which give the opportunity for zookeepers to provide valuable enrichment to all species without any infighting.

Recent advances in taxonomic research have found chromosomal relationships between the orders Cetacea (whales and dolphins) and Artiodactyla (the even-toed ungulates like deer, llamas and pigs). This grouping of orders is called Cetartiodactyla and it means deer are much more closely related to whales than previously thought.

To put it into perspective, being joined at the order level is essentially sharing a biological relationship as close as you have with ring-tailed lima.

We’ll leave it up to you to decide the significance of that. 4

6. They’re part of the SSP program

Tufted deer populations are currently decreasing, according to the ICUN. Hunting is common in China, and since these animals live on the edge of the forests, there isn’t a lot of space to hide as human populations encroach upon their habitats.

Because of the threats they face, they’ve been assessed as unable to maintain 90% of their genetic diversity over ten generations by the Association of Zoo and Aquariums (AZA).

This allows tufted deer certain research and conservation priorities to try and maintain their populations in viable numbers and qualities before their genetic diversity drops to a dangerous amount. This is a cooperatively managed program between AZA zoos and sustainability partners to manage breeding. 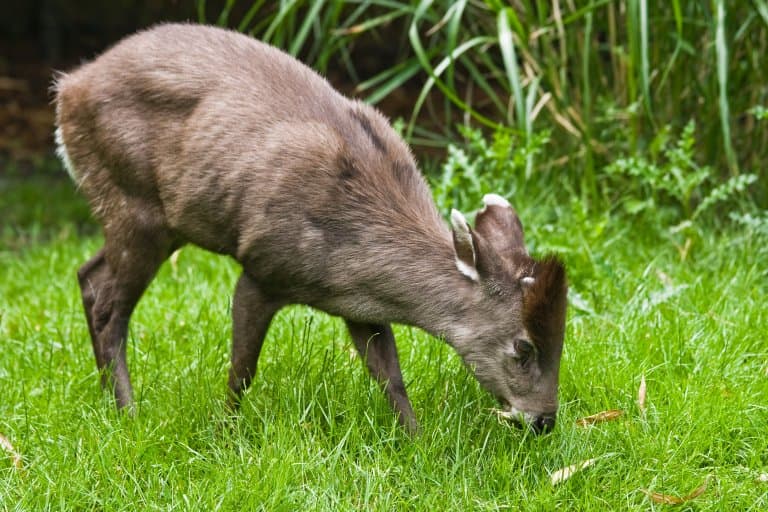 Tufted deer have been found to contain a novel form of virus in their gut that resembles those which can jump species into humans. Bocaparvoviruses (BOV). These viruses infect the respiratory and gastric systems of other animals and humans and are a valuable avenue of modern research, especially given that historically, human-wildlife interaction has brought us numerous pandemics.

Researchers are working to sequence and categorise these viruses as best they can to better understand how viruses jump from one species to another, and hopefully, to reduce the likelihood of that happening.

Unfortunately, animals like the tufted deer are prime examples of creatures whose habitat is being dangerously encroached upon by human development and overpopulation, and as such not only is their very existence under threat, but the chances of them transmitting something unpleasant into the human population also goes up. 5

Although this survey was carried out in 1998, and it’s believed that the tufted deer population has sadly dwindled further due to overharvesting for it’s hide which is used in textiles, and habitat loss.