Vampire bats are a group of three species of bat from the family Phyllostomidae, also known as leaf-nosed bats. They are well known for their blood-eating habit.

The name comes from Serbian folklore, where a ‘vampir’ is an evil mythological creature that drinks human blood. 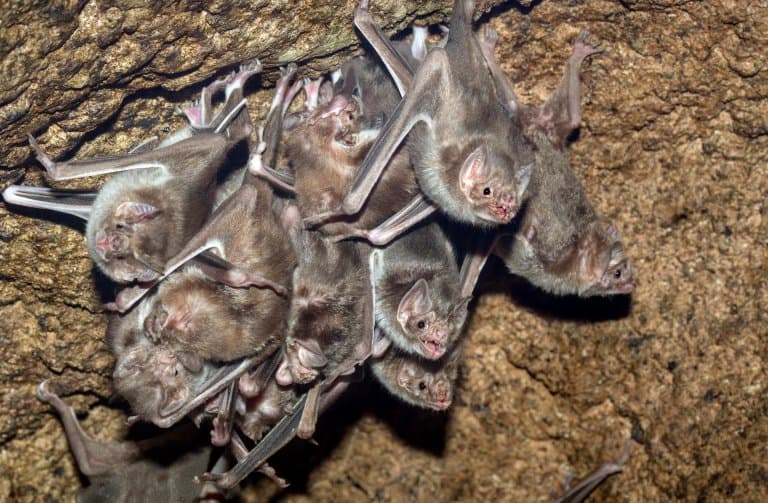 Bats are traditionally split into two sub orders, megabats like the worlds largest bats the flying fox, which are generally fruit eating, and – smaller, echolocating microbats, like the vampire bat.

Vampire bats are found in tropical and sub-tropical regions of Mexico, Central America, and South America including Argentina, Brazil, Chile, and Uruguay.

They generally live in large colonies in almost complete dark, such as caves, old buildings or hollow trees. They have strong bonds between members of the colony.

Like all mammals, they are warm-blooded and give birth to live young.

1. There are only three species of vampire bat in the world 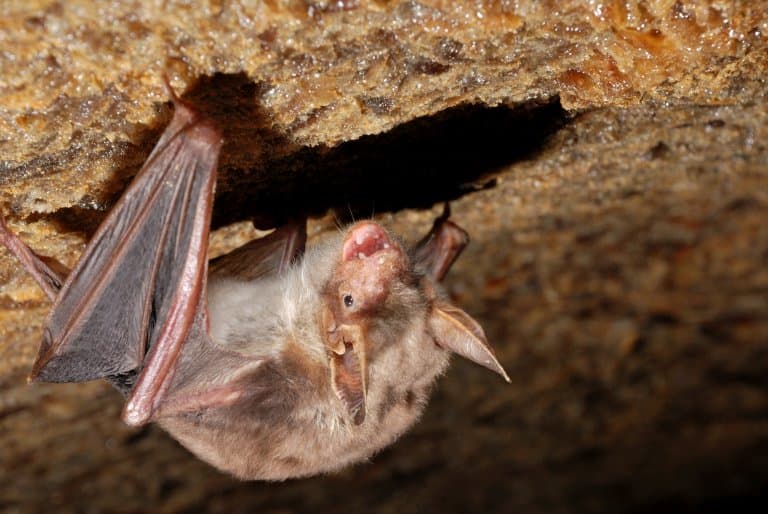 The common vampire bat feeds on warm-blooded animals, mostly on large mammals such as horses, cows, and pigs, and very occasionally on humans!

While the small incision and blood lost for a human would not be life threatening, unfortunately some humans have caught disease, such as rabies and gone on to die. 1 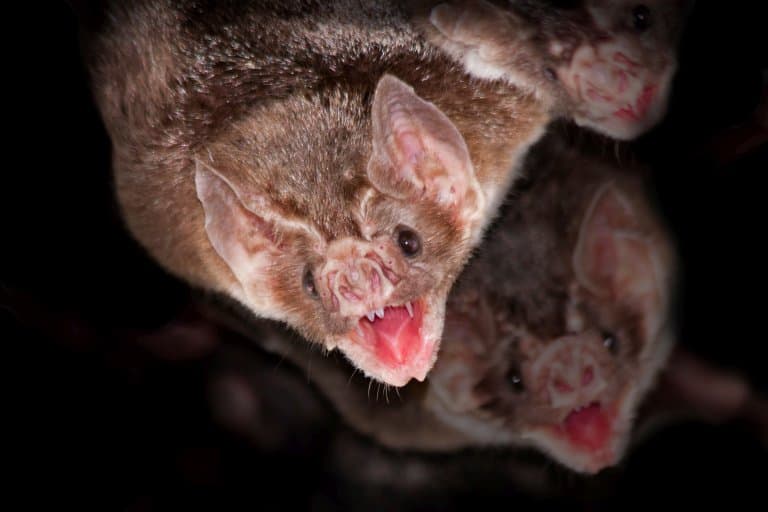 3. They are completely nocturnal

They leave the roost to feed when it is dark and will wait for the moon to go down.

Vampire bats can hear the low-frequency rhythmic breathing of sleeping animals, which may aid their night-time hunting.

5. Vampire bats stalk their prey on the ground, not in flight

They are very agile and can walk, run, and hop on all four limbs, stalking their prey stealthily. They have special thumb pads and strong limbs, which help them to walk on the ground and to take off into flight after feeding. 2 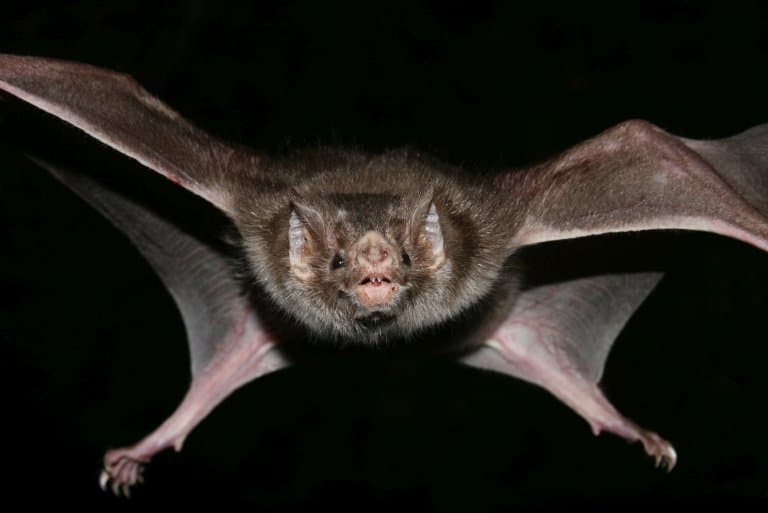 6. They must excrete excess fluid after a meal of blood

The blood consumed by vampire bats in a typical 30-minute feeding period can add  at least 20g to their body weight. Within two minutes after feeding, their kidneys and bladder start to expel urine to lighten their load so that they can get off the ground!

7. They have heat receptors to help them find blood

They have naked pads at the end of their snouts to detect infrared radiation. This indicates where the prey’s blood is closest to the surface of its skin and is where the vampire bat will make a small cut with its incisors to let the blood flow out. 3

8. They have razor-sharp teeth

The upper incisors are triangular in shape with very sharp points. These teeth have no enamel, which helps to keep them sharp for cutting into the skin of their prey. 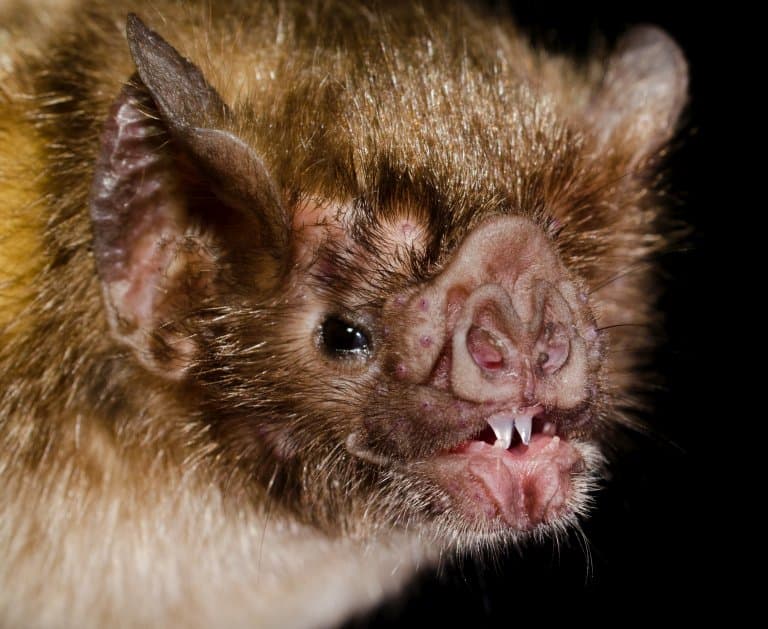 9. Vampire bats don’t suck blood; they lap it up

Vampire bats eat by making a small and precise cut in the prey’s skin and then they lap it up with their tongue.

They will feed like this until they are full.

10. They have grooved tongues

Grooves in the tongue direct the blood backwards into the throat of vampire bats as they feed.

11. They can die after two or three nights without blood

Vampire bats must eat at least every two or three nights.

If they are unable to feed in this time period, they will die from lack of nourishment.

Research has shown that vampire bats regurgitate blood into the mouth of another bat from the same colony to ensure its survival. 4

13. They live in colonies of varying sizes and social structures

Common vampire bats can form colonies of 1,000+ individuals, while hairy-legged vampire bats may be solitary or live in groups of about 12 animals.

Research shows that common vampire bat colonies have a complex social structure with ‘harems’ of females and separate groups of males. 5 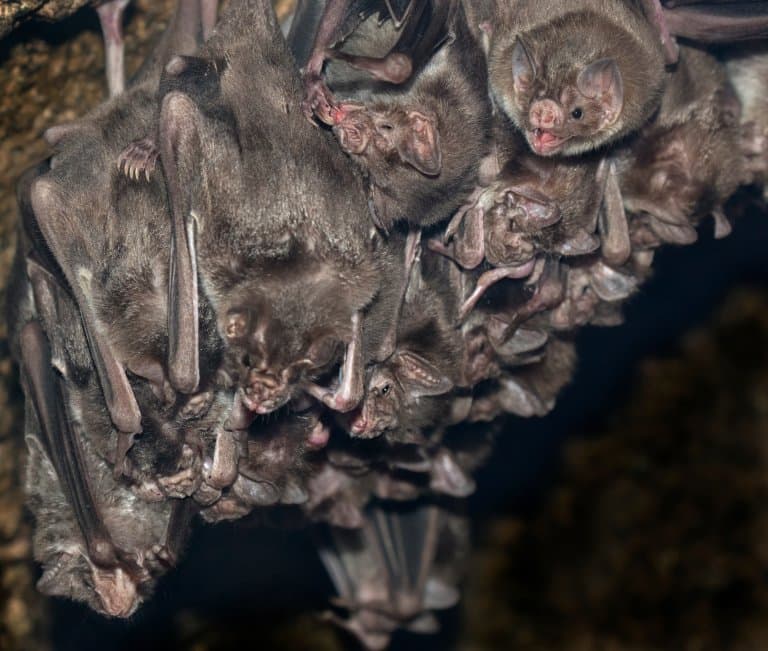 14. Females and males huddle together as the temperature drops

In warmer situations, females and males tend to form separate roosts, but when the temperature drops below 11ºC, they form one larger roosting colony. This is known as social thermoregulation.

15. They usually give birth ‘upside down’ to a single ‘pup’

Female bats usually give birth to just one young bat, called a pup.

The female turns herself upside down from her usual head-down position and hangs with her tail-end down. She creates a pouch with her wings to catch the pup as it comes out bottom-first.

16. They feed their young on milk

The mother bat feeds her pup on milk through her nipples, as all mammals do.

17. Female bats help each other

During the first few weeks after giving birth, females are fed regurgitated blood from other female members of her group, so that they can survive while they are nipple-feeding their young in the ‘nursery’ roost and cannot hunt for themselves.

Female vampire bats are also thought to be the only bats that ‘adopt’ and care for pups who have lost their mothers.

18. The colonies are often destroyed by farmers

Farmers try to protect their livestock from vampire bats by destroying bat colonies.

Although the tiny cuts made by vampire bats don’t cause direct harm to prey animals, they can lead to infections, and a small percentage of bats may transmit rabies.

Farmers treat them as pests.

19. Their saliva is used to treat human disease

Vampire bat saliva contains an anticoagulant to prevent their prey’s blood from clotting as the bats feed. This glycoprotein has been found to be effective in treating humans who have blood clots, such as stroke patients.

The scientific name for this useful chemical is draculin! 6